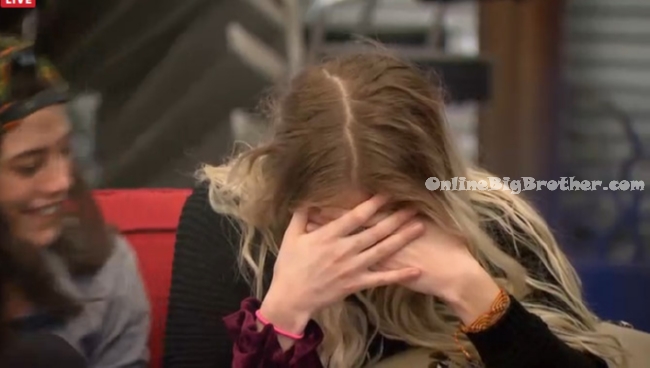 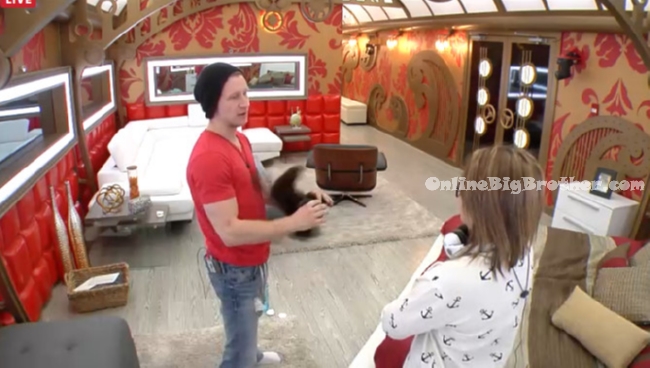 3pm All the house guests are sitting around the living room chatting. Willow heads up to the HOH room to listen to the music. Bobby joins and tells her the plan to put up Godfrey and a pawn. Maybe Johnny or Kevin. Willow says you could just do the first two people to drop out. Bobby says yeah that’s what Zach and I talked about. I just don’t want blood on my hands. Willow brings up how Graig gets paranoid and was questioning if Zach was with us. Zach reassured him. Bobby says that’s why I don’t want to tell Graig stuff. Big Brother calls Willow to the diary room. Willow. I’m either in trouble or they love me! 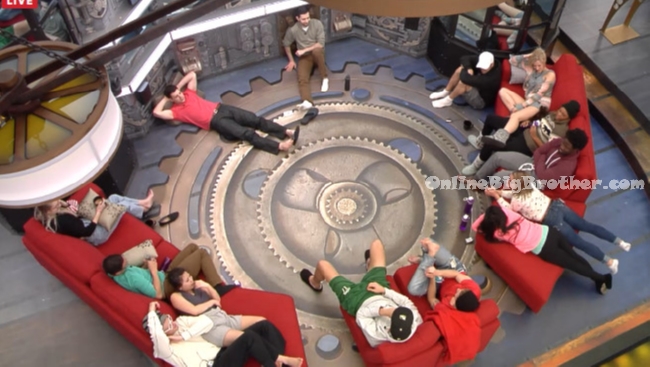 3:15pm – 3:40pm The house guests start taking turns telling their worst date stories. Kevin tells a story about being tied up and being submissive like from the movie “Fifty Shades of Grey”. He says part way in he ran to the bathroom with his hands tied and threw up, then grabbed mouthwash and went back at it to finish the job. Godfrey says his worst date was a rock climbing date with the no ropes and the girls dad. Bruno’s best day was his wedding day. They continue telling their best and worst dates in the video below.


The house guests hear Big Brother testing the Have/Havenot Comp in the backyard and realize that it has to do with water.

3:55pm In the pantry – Zach and Kevin are talking. Zach says he thinks he’s (Bobby) going to put up God. Bruno enters and the conversation ends. Kevin leaves. Zach and Bruno comment on how they’re good and leave the room. 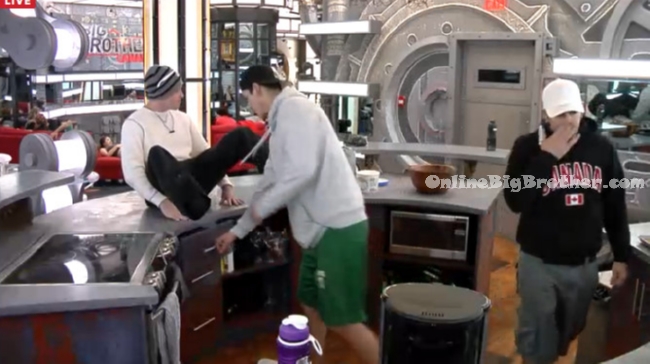 4pm – 4:40pm In the kitchen – Graig tells Godfrey he won’t vote him out. I never will. We have to keep the numbers or they’ll nerd us out. Right out of this game. Bruno and Bobby join them and they chat about random things.

All the house guests are waiting around for the Havenot competition to start. Willow, Cindy and Godfrey keep falling asleep and being woken up by big brother.

5pm Kevin tossing toilet paper gets one caught on the ledge and one on the chandelier. Adter trying to get them back big brother tells him to stop that!

THIS IS WHY THEY CAN'T HAVE NICE THINGS @bigbspoilers #bbcan3 pic.twitter.com/tmd2n8k9kt

5:25pm Bruno and Graig agree they’re both playing a strong game. We just need to stay tight. Graig says Willow in tight with us too. Bruno says he’s praying he doesn’t get on slop. Graig says I hope you don’t too bro. Bruno says the funny thing is no one knows who Bobby’s with. We have to get all six (The Chop Shop = Ash, Bobby, Bruno, Graig, Zach, Willow) of us together to talk. The end their conversation and head into the HOH room.

5:30pm – 6pm Pilar and Ash decide to take a bubble bath together. Zach and Kevin play hoops with a pot and toilet paper.

In the kitchen – Quick conversation between Zach and Willow. Zach says that if one of them wins the veto then Johnny goes on the block. They talk about cutting Graig from the chop shop alliance when the time is right. Zach says then we can pick up JP.

6:20pm – 6:30pm In the pantry – Kevin and Jordan talk. Kevin says “I thought of a symbol. The Sheyld was weak! Good ideas but it failed. We’re The Fortress!” Kevin throws up is arms in front of his face. Any time you need to duck your eyes behind. We’re in the same fort. How you doing buddy? Jordan says I’m doing good. Kevin says Any time you vote to evict. But game wise we’re good just relax. Jordan asks what do you think he’s going to do? Kevin says Godfrey and a pawn. After Kevin leaves the pantry, Jordan comments he has no idea! No idea! It’s all about (new port)????, none of that! He doesn’t need to know. Good to keep Kevin in his back pocket for now. He’s smarter than he’s letting on.

6:30pm – 7:15pm In the bedroom – Ash, Pilar, Cindy and Kevin are chatting. Kevin asks Cindy who she likes in the house. Cindy says Zach and Bobby. But not Zach when he has a baby face. The cameras switch to Graig, Zach and Bobby talking in the HOH room about his nominations. They head down to the pantry and do some more chopping and fist bumping.

4:15pm Big Brother announces “House guests, just to let you know we are going to be have a competition shortly” (Have/HaveNot Competition) All the house guests start jumping and screaming out of the room. Big Brother blocks the feeds.

8:30pm No feeds no leaks Have nots still underway

9:05pm No feeds no leaks Have nots still underway

9:50pm No feeds no leaks Have nots still underway

Who do you think will win as far as saying the same thing over and over?

To be fair, it’s not Sindy’s fault that her parents gave her a name that she would have to explain for the rest of her life.

The Prophet
Reply to  SMG HOOVER

Forgot about Devin and his daughter. Oh memories…thanks for making me laugh.

Love Willow already, not sure how I feel about Zach, seems kind of douchey
Bobby seems like this seasons Emmett, and I’m glad a “guys alliance” doesn’t seem to be forming so far *knocks on wood* so over played

Well the guys look like noobs already. That guys alliance is part 1 of how to win BB formula. The talk is get 2 out 1 and 2. Someone in convo mentioned Cindy(S) was poison…. no kidding. Early impressions have Willow as my fav atm. Bobby won’t last unless he figures out how not to become a target. Needs a 4 person alliance to protect his non HOH weeks or he’s going to get in trouble. Comp beast likely but social is another thing. RIP Godfrey unless he wins veto….. maybe. This early anyone can screw up and become the target.

As for the first comment Devin wins hands down 😛

The only thing more annoying than Sindy is….having to write Cindy,but with an S.

I think Ashleigh will go far in the game.

Now that I know Zach called out Peter as a bad game and crumbled under the pressure of making a big move, and a p#ssy too, I’m going with him as my favorite player!

Probably the worst part about every BBCan season is Peter, and especially Alec, endlessly reminding us that they were on the first season of BB Canada. I’ve never seen a guy work so hard to milk 2 minutes of fame that existed two years ago. Get a life and get over it already! People don’t care about you!!

I love it and couldn’t agree more! Alec and Peter are like Dion Phaneuff and Phil Kessel – all hype and no might yet they believe that they are in the same category as Dr. Will or Gretzky. Keep posing photos with Judd hoping for likes Alec and keep thinking anyone watching the side show even remotely cares what you think Peter – the reality is that as soon as Neda, John, Arlie or Zach (this season) want to they will crush your morbid social media / BBC fame that is hanging delicately like the sword of Damaclese above your pinheads! You will soon be as forgotten as Spencer from BB15 because that is what you are!!!!!

It’s always hard to tell in the first few days of the live feeds.

so over the whole give the alliance a name and hand signal crap. I’ve got a hand signal for you. well it’s only one finger but you get the idea.
the players that are playing are really playing too hard. Jordan and zack… how many fake/real alliances do you have? something’s going to implode.
the players that are trying to be down low are so down low I’ve forgotten their even in the house. brittnee? are you starfished in the vault or something? floating only works if you’re face up in the water or can hold your breath for a realllllly long time.

Not hating on the floaters yet, neda and jon floated during the first few weeks in the house and ended up showing great gameplay. Those who played really hard early on usually gets the boot and considering this is bbcan, the power will shift to favor the underdogs at some point, unless they are jeda who survived the veto twist its better to be on the outs.

I know i’m in a minority when I say this… but I wasn’t a jon fan in terms of gameplay. but that’s not my point, so give me a chance here. even jon and neda made overtures to get into alliances during week one and two. jon wasn’t successful in getting into the alliance he wanted. neda’s alliance fell apart. but they were at least making attempts. some of this year’s hg’s are deadman’s floating their way through the first week, with no evidence of any attempt to form any security for themselves. there are a couple of players that will show up in a feed and i’ll be thinking, ‘oh yeah, that one is in the house too. sort of like the couch, but less active so far.’ hoping that’s just an acclimation thing, and not a gameplay choice.

What day is nomination and veto day? Friday and Saturday? On a side note, favorites so far are Willow, Ash, Sarah, and Kevin.

going to give the sideshow a try for the first time…. just to see how the show is spinning the first few days in order to get an idea of how they will be cutting and spinning the next few weeks. readying myself for the nails on a chalkboard personalities that is sideshow.

I can’t stand that show. They need to change the hosts after every season.

Actually even with new hosts I wouldn’t watch it.. feeds please!!

after 11 minutes… I can see why you can’t stand it simon. i’m not committed enough to put myself through any more of it.

Come on Simon, don’t you think I should be hosting the sideshow with Peter and Arissa? I am a BBC PhD after all and the smartest houseguest to ever enter the BBC house…. LOL