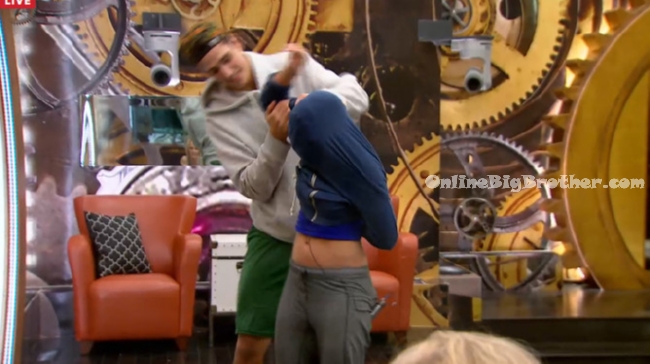 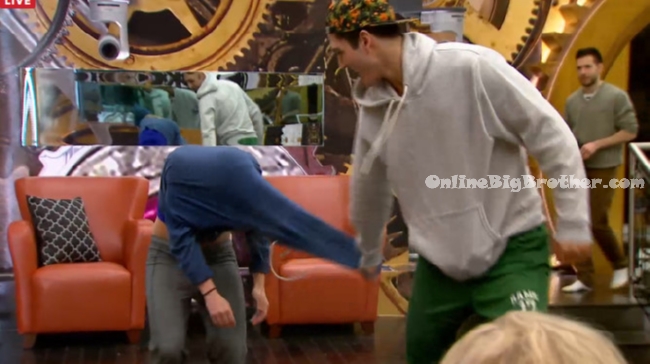 11:45am Willow, Ash and Zach are talking by the chairs outside the washroom. Zach asks Ash if she talked to Bobby yet. She says no not yet. Ash comments on how tired Bobby was last night and how she felt bad for him. Zach asks you slept in there with him? Willow says he just got the room this morning. Zach says oh yeah, duh! Willow starts jumping the gap. Zach and Willow start horsing around. He pulls her hoodie over her head. Willow asks Zach “Is this kamasutra? Zach says “No, you would feel more pleasure if it was!”

Jordan the "Superfan" thinks the havenot room will have spikes on the floor with dog shit. @bigbspoilers #bbcan3 pic.twitter.com/nRg5gnUyP0

12:15pm Pilar and Sarah are talking alone. Pilar says the first week was tough. Sarah says you did good. Pilar says you guys helped by keeping me calm. Sarah says that Risha didn’t stay calm. Zach joins them. Sarah compliments him on his clothes. It’s so on point. Zach says he rocks this all the time at university / summer. 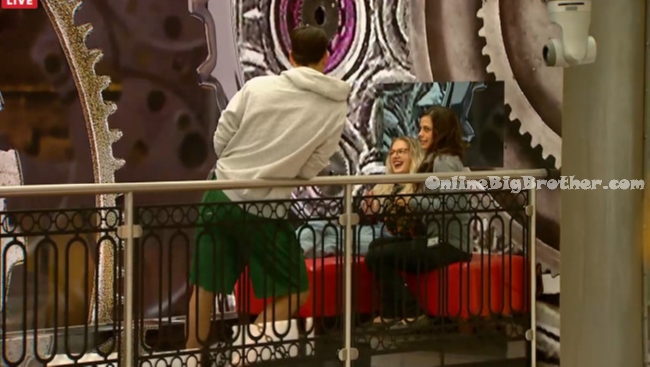 12:30pm Bruno and Godfrey are talking. Bruno says that Risha was definitely on our side. Godfrey agrees. Bruno says and that’s why she needed to stay. Their conversation turns to talking about politics. 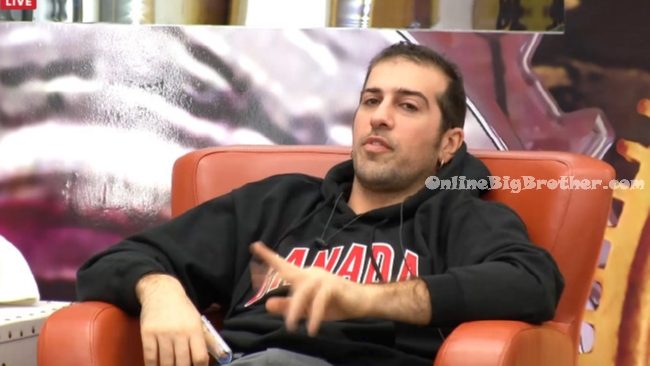 12:50pm – 1:20pm In the kitchen – Naeha, Sarah, Graig and Johnny are cooking / cleaning. Meanwhile up in the HOH room – Pilar, Ash, Bobby, Jordan, Kevin and Britt are talking about random things.

1:35pm – 1:50pm In the HOH room Ash talks to Bobby about what he’s going to do with his nominations. Bobby says Britt and Kevin. He says that he can use the excuse that he’s just putting up the two people that fell off first in the HOH comp. Then we can put up Godfrey if the veto is used. I can’t make it personal this early in the game. Bobby says that way Godfrey has less of a chance in playing in the veto. Zach joins them. Bobby says he doesn’t want to make a big move now but would if they wanted him to. Zach says you don’t have to. Zach suggests putting up Johnny or Kevin with God. Zach says you’re not going to make an enemy out of God. I can be that guy for you that goes up to God and calms him down. Bobby says maybe I’ll just put up Kevin and God. Zach says or Johnny. Bobby says just keep reiterating that God is the target. Zach says I just think God will be with us. We can put him up and he’ll feel like sh!t the whole week and then we’ll save him. Zach says spread that God is the target and Kevin goes up because he was the first to drop. Zach tells Bobby to tell God that he threw a few people off early and that you didn’t know if you could trust him. That way he’s easy to reel back in at the end of the week. Zach comments its a good week to send a pawn home. They end their conversation and leave the HOH room. 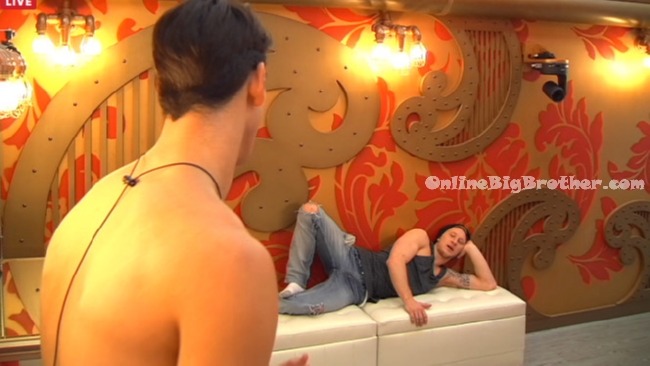 2pm All the house guests sit down to lunch together. They hold hands and God does a prayer before they eat. 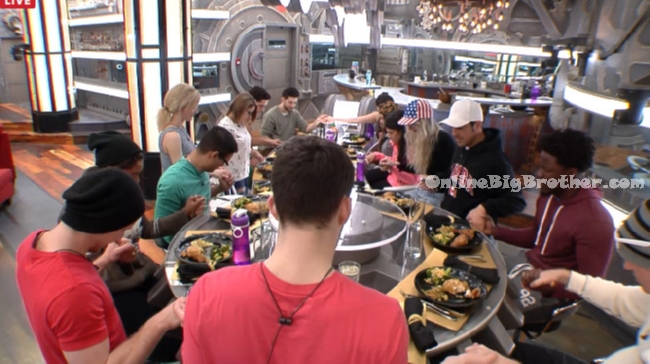 2:30pm Zach talks to Naeha and asks her if she’s gotten a feel for what Bobby is going to do? Naeha says no. Zach says he thinks he’ll do God and a pawn. Naeha asks if it’ll be her. Zach says I don’t know. Then says no, just kidding. Graig comes into the room. Zach asks him if he’s gotten a feel on Bobby yet? Graig says no. Zach says I can’t get a read on him. I think it’ll be God and a pawn though. Graig says yeah I guess we’ll see. 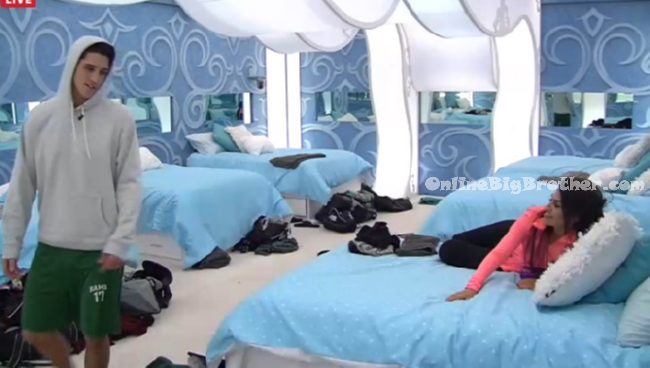 2:40pm – 2:50pm HOH room – Graig, Willow and Zach are talking in the HOH room. Graig says that no one, no one thinks we’re working with Bobby. I think Johnny for sure needs to go. We need the numbers. Bruno joins them. Graig says we have to make sure Godfrey stays. Zach says we need to get Bobby up here to talk to him. It’ll be Johnny or Kevin. Graig says I have Brittnee like this. Graig says I get paranoid some times .. like you guys are going to chop me off. Zach and Bruno reassure him they won’t. Zach tells Graig to not be paranoid like he was earlier. Graig says that Bobby never wants to talk game with me. Whenever I do he says he doesn’t want to talk game and starts doing pushups. I just want to get us into the 6 and be like the Brigade. We’re “The Chop Shop!” Graig says we need to talk to Bob before nominations. Zach heads out. Graig comments I some times get worried Zach is going around the house trying to get me out. Willow reassures him that Zach is in it all the way with us. Graig says okay. The only guy I am worried about is Zach. Willow says he’s with us 100%. 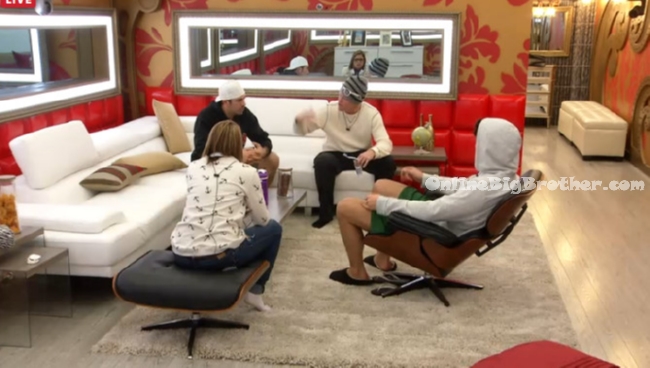 Is it just me ?
Johnny =Frankie (much less annoying of course and no celebrity sister)
Kevin=Zach ( acts gay but says he’s not into men …poor child doesn’t realize he is bi)

either way I hope they last longer together, very interesting.

My guess is Zach and Ash hook up in the next week.

Sarah is definitely my fave for now, she’s giving me a less “bitchy” Neda vibe.
Sindy is definitely a Sabrina but is less obnoxious, Pilar sadly is developing into a Rochelle.
I’m excited for the developments in this season, today is definitely a good day for live feeders because alliances are starting to form now.

remember its Cindy with an S !! lol

im thinking more Zack and Williow, dam kids cant keep their hands of each other

way too early for ZachAttack I mean Kevin to leave 🙁