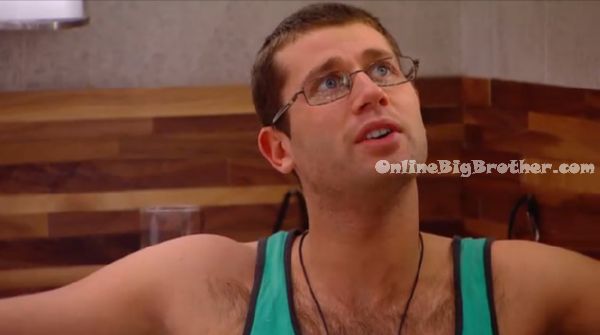 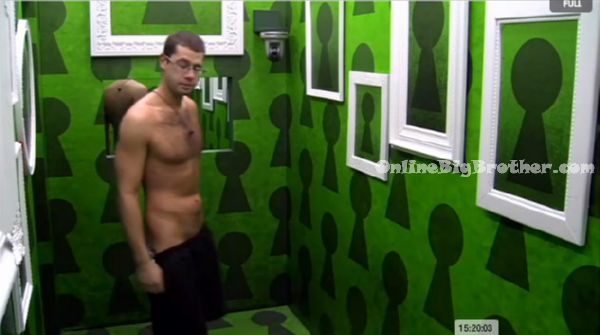 7:40am Arlie wakes up and heads downstairs. He heads into the storage room with his shorts falling half-way down, he then heads to the diary room. When he comes out of the diary room his pants are still falling off. Arlie heads over to the chandelier by the living room couches and starts counting the jewel strings on the lights. He counts 178. He comments on how he might be off but that’s okay if its off by 2-5 so that if they have to guess then he won’t look like a sniper. He then counts the other one and then starts counting off all the items he’s counted in the house. Arlie comments on how Andrew is so intelligent but then asks how intelligent could he be if he tells everyone how intelligent he is.. Arlie says “It’s so much easier for me to play the idiot, than I thought it would be!” 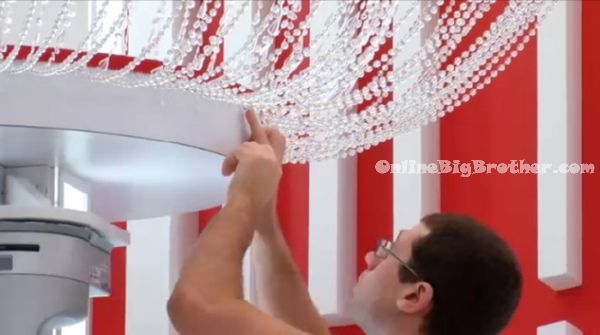 Arlie walking around with his shorts half down:

8:35am – 8:45am Paul joins Arlie in the bathroom. Arlie asks Paul for a favour – Arlie asks if its possible to not hang out with Paul so much any more because it’s almost like game suicide for him to be seen with him. Paul says its okay and that he understands. Paul says that he respects Arlie for talking to him about it rather than just ignoring him. Paul tells Arlie that this just might be his saving grace with Paul later in the game. Arlie says I would really appreciate it if you didn’t tell Adel or Kyle about this conversation because they are just really really hot right now. Paul says he won’t and that he isn’t even talking game right now.

9:30am – 10:10am Big Brother wakes up the other house guests. Heather complains that she feels like her face is puffy. Ika tells her that she doesn’t look like it. All of the house guests are waking up and getting ready for the day. Arlie starts shaving in the kitchen sink. 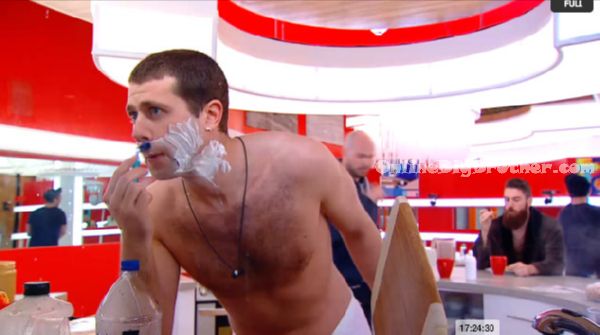 10:25am – 10:45am Paul, Adel and Kyle workout and talk game in the backyard. Andrew & Kenny walk through the backyard to the hot tub room. Kyle says he hates how comfortable they (Andrew & Kenny) are in the house. Adel says that if I win HOH I am going to rip my shirt off like the hulk! Paul says I am looking forward to the POV, it is going to be epic. Go out with a bang! Paul says my biggest targets are Kenny and Andrew. Kyle and Adel agree. Adel says Sabrina too but she isn’t a threat. Paul tells Adel that Sabrina is a wicked virus if you want something to get through the house just tell her. Same with Sarah.


10:50am – 11:05am In the kitchen – Kenny, Rachelle, Andrew and Sarah discuss what they think the Power of Veto competition will be like. They think it will be one where they have to swing back and forth matching up things from the movie they watched last night. Andrew, Kenny, Racelle and Sarah talk about using the POV to take Paul off the block. Andrew says I hope he doesn’t think we are saving him. They talk about not letting him know to shock the s**t out of him. Meanwhile Jon and Arlie talk game on the chairs outside the HOH room.

Update: my 2 new faves are Sarah and Arlie.
I just watched the March 08 After Dark episode, and listened to Sarah and Paul’s conversation by the pool. (I didn’t want to at first because of Paul annoying me so much, but I’m glad I did.
It allowed me to appreciate Sarah: she’s eloquent, genuinely nice, understands that in this game, you need to assume the worst in ppl first, has a clear understanding of her current place in the game and isn’t a biatch (or diack) about it.
Kenny was my early favorite, but in recent days I see the power kinda making him become that (diack/biatch) about it (“my way or the highway!”).
I just saw Arlie on the live feeds in the early morning in the bathroom: he was reciting a lot of numbers he learned by heart (how many steps, tiles, etc.) and did have a little camera monologue about how he’s surprised how easy it was for him to play dumb. Then, Paul came in, and Arlie actually – very honestly (we’ll see if that ends up being a mistake!) – told him “I’m really sorry, this $ucks for you, but I have to play for my own game, and it would be bad for me to be seen talking to you a lot. I hope you won’t tell anyone else about this conversation.” He seemed genuinely empathic for Paul’s current situation, and again, wasn’t a Biatch/Diack about it. I was very impressed.
Many characters I still don’t fully know, but as of now, Sarah and Arlie are my current faves.

tsinoy
Reply to  Johhny (the European one!)

Agreed! I really didn’t think I’d like Arlie coming into the game, but he’s found a good alliance that he can hide behind while not be a complete floater. I also thought Sarah would be really boring but she seems to have a lot of game.

Arlie is so weird. I however think it would be hilarious if big brother, as a tie breaker, did one of the “How many (BLANK) are in the house” but purposly did something Arlie hadn’t counted.

I don’t know what the producers were thinking having Peter the brainiac with no brain and no heart, be a commentator, or whatever the heck he is. I thought he was pretty much despised by most viewers.

Johhny (the European one!)
Reply to  Cora

yeah, I remember a lot of forum talk during season 1 where people were questioning why Peter got such a positive edit and his diary room sessions were always used to “summarize” the events… The live feed viewers were the only ones to see just how clueless he really was. His constant “I’m the greatest!” DR speeches with nothing to actually back it up was really getting on my nerves…
Watch out, they might as well hire the Brain Peter to comment on Strategy for Season 3! 😀

“Watch out, they might as well hire the Brain Peter to comment on Strategy for Season 3! :D”
I meant to say “The Brain Paul”! See, I’m already mixing up Peter and Paul!

I totally agree with you about Peter. He is just as annoying now as when he was on the show. Had to change the channel for the after show on Thursday. (I wonder if he has a shrine built around Liza’s hair elastic.)

Shaving in the kitchen sink? Gross.

Ika is a total biatch who is worse than Talla when it comes to staring at every single mirror (herself) every single moment. I can’t wait to see what she’s made of and see if she’s willing to get her weave wet.

ika can be a little spunky but i like her!! she’s gorgeous and i like hearing about her plans w the girls alliance.

I definitely did not want to see Arlie with his shorts half way down…YUCK!

Also happy this house is a SHOWMANCE-FREE ZONE and the game is being played without the girls thinking they can get ahead by hooking-up with a guy. These girls can think for themselves (not sure about Heather who does not have any detectible personality that I’ve been able to see).

Kyle is a slimy, sex-crazed perv who thinks with the head in his crotch as opposed to the head on his shoulders. After listening to him talk about all the girls he’s banged (and counted and collected photos of), if I were one of them watching on tv, I’d be running to the toilet to vomit. This guy’s got major probs.

Watching Sarah and Kenny closely to go far this time around.

SHOWMANCE-FREE ZONE – have you seen annoying Sabrina in bed with Andrew?? Is she just kissing a$$ or ?? She’s all over him – GROSS!!!!

Haven’t yet seen Sabrina in bed with Andrew but from your remark it would appear that once again that mouth is in over-drive… why am I not surprised?

I forgot to add – I feel the same about kyle, open his fly and his brains fall out – he’s a real loser.

This could be a great twist, maybe the best in BB history. Too bad the feeds are so sparse. But they’re free, so I guess I shouldn’t complain. I feel like they haven’t given us a chance to get to know the core HGs. Andrew has done well, and to my surprise, I don’t dislike him, He is on a roll now, but next week he is in serious doodoo if Adel, Kyle or Paul win HOH. We haven’t seen how he is when his back is against the wall yet. I like Kenny because he is smart and discreet about being gay instead of over the top like we always see. Not all gay men are like that, and its refreshing to see. The alpha males don’t even suspect it, they think he is a hippie lumberjack type, and the girls like him too. It’s a pretty good bunch of interesting people, I just wish we got to see them more often. I feel like I know the other three better than I know the house.

Allison could ride both sides of the fence between the guys and the girls and make important alliances. The guys that matter will feel comfortable with her and the smart girls will too. She would be in a good place, but I hope BB doesn’t tell the HG that Allison has been watching them for a week, because that will make her a huge target right away. And a huge asset. If BB doesn’t tell, I think she is smart enough to not tell either. Personally, I hope they don’t even tell that she was voted by Canada, just drop her in there and let her come up with her own story. But that is too much to hope for. She is the one I want to see, I don’t want to watch Scott, he is starting to annoy me, and I don’t think Nate stands a chance and I think he knows it and is just enjoying it for what it is. I like watching the war room though, it’s kind of interesting to hear them on the feeds doing commentary on the feeds.

he being sent by the mouse do the tasks