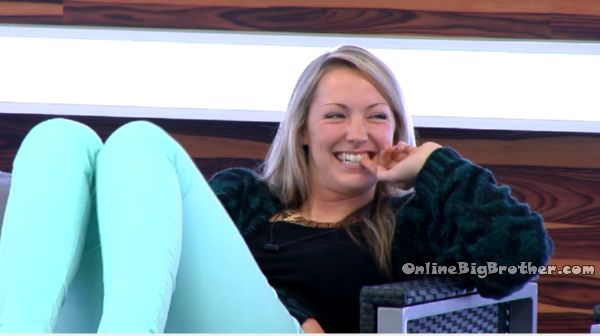 Allison is telling him how shitty her position is now that the house is split and her vote is important. Kenny understands mentions how Allison has to make a big decision based on little information. Says they have 2 weeks of history with the house Allison doesn’t.

Allison – “HEather is a bigger threat to me immediately.. I understand what you say about if Paul going”

Kenny points out if Heather stays and all the girls had voted her out she’s not going to stick with them.

Allison says none of the girls have tried to get to know her. “They haven’t approached me until today”
Kenny – “cause they want something from you”
Allison “I told IKA earlier today I was going to vote for the majority… I am the majority”

Kenny says that IKA has lied “Hand over fist” to him. She swore to him that she wasn’t talking about getting him out and he knows that she was. Kenny explains that IKA was scared to take a swing because if she misses she has a lot of people coming after her.

Kenny points out that IKA is sleeping in the same bed with Heather and telling her she’s safe when all along IKA is fighting like hell to get her voted out, “How can you trust someone like that”
Kenny stresses the lack of loyalty in the girls alliance “They are all willy nilly” 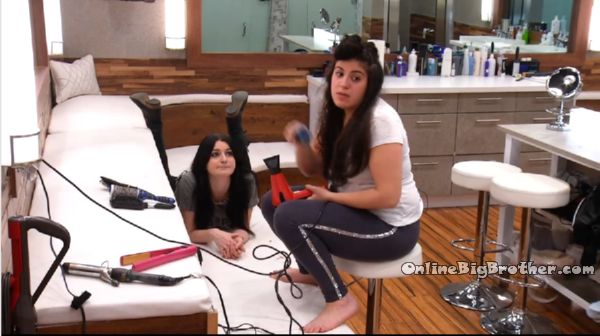 Sabrina thinks that the house is underestimating her role in the game. Rachelle says she doesn’t. Sabrina says even if IKA goes home Sabrina will still stick with Rachelle.
RAchelle – I think we’ll have at least 3 months together.

Sabrina tells her not to tell the girls this but if they win HOH they have to put Adel up to flush out his power. Sabrina – “Then we’ll backdoor new girl” 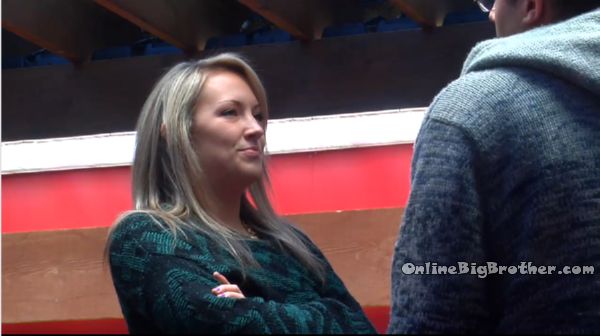 Allison saying she’s in a tough spot because she’s the deciding vote her first week in the house. Allison “I’m going to do what is best for me and my game in the future”

Allison – “Girls are harder to get along with for sure”
Arlie – “You will be at the very very bottom of the girls.. Social, Personal and game.. if you look at the guys you fit somewhere in the middle to be honest”
Arlie – “for real come on board lets make a party”
Allison – “My fear is something like the brigade”

Allison says that Heather is not a fan of hers, “that whole plan of getting Heather out and Paul next week was beautiful” 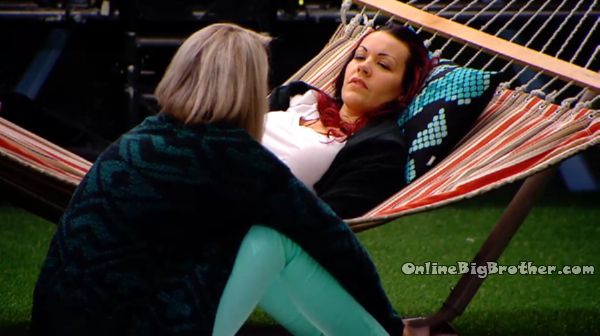 Allison – “From my standpoint socially theses girls have not made an effort to get to know me”
Sarah says it’s clear that the girls do not trust her because they have been keeping vital game information away from her. “the boys at least share things with me… I’m at the bottom of the girls”.
Allison – “No I am”
Sarah doesn’t understand why the boys are so nervous wanting to get out Paul instead of Heather. She winders if there was a way to talk the boys into keeping Paul, “I just wish we could explain to the boys.. ”

Allison says Heather staying in the game is worse for her short term. She doesn’t see Paul winning competitions but see Heather winning. Sarah does not agree she thinks Heather is useless.
Sarah – “Her (Heather” body has changed a lot since coming in here”
Sarah – “I feel like i’m going to get diabetes watching her eat.. she single handedly destroyed all the cookies in the pantry”

Sarah says Sabrina is with the girls but she is not gunning after Kenny and Andrew right away. Adds that Sabrina is also a bit with the guys.
Allison – “She’s a great social player”
Sarah – “she’s amazing”
Sarah – “I agree going with the boys is probably the best way to go and that is where I am probably going to go”
Sarah I’m pretty much on that train.,. we’ll need to check in” 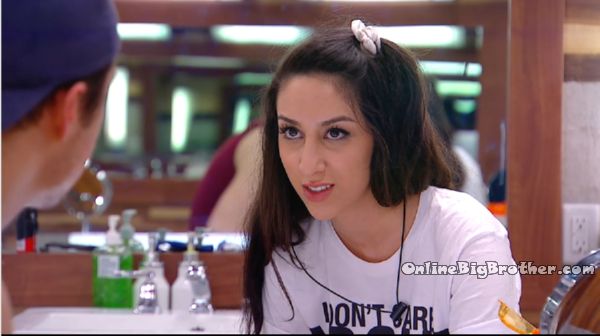 7:40pm NEda and Jon in the Bathroom

Neda saying that IKA didn’t want to backdoor anybody when Andrew was being annoying it was joked.

Neda – “She said she had a talk with the girls about backdooring someone”
Jon – She felt that Andrew was bullying the girls..
Neda – “I have a feeling she is telling you things because she knows you will go tell the guys”
Neda never heard about a plan to backdoor Andrew nothing serious.
Jon – ‘She’s a liar”
Neda – “After the veto was used she said that could have been an option”
Neda adds that Sabrina would never let the girls consider backdooring Andrew.
Neda – They are so against the new girl..
Neda – This new vote is going to say a lot of Sh!t 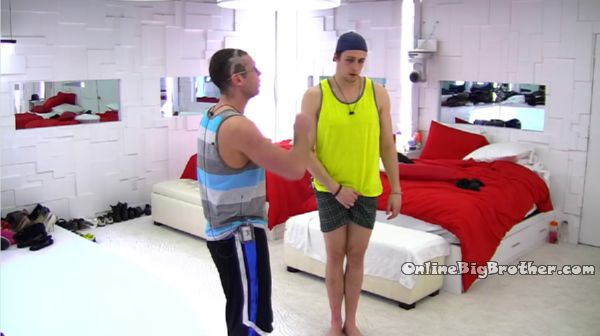 Arlie and Jon both agree it’s cook Adel trusts them, “HAve you told anyone else.. don’t tell the guys”
Jon – “Don’t tell Kenny”
Arlie – “Not in a bad way you can’t trust them”
Jon – “I never trusted them anyways”
Arlie – “I have a serious question.. what have you said to NEDS about this game”
Jon – “In what aspect”
Arlie – About the guys
Jon – I said I wasn’t the biggest fan of Andrew

Arlie says that NEDA has been spreading that around. Arlie stresses that they cannot trust Neda anymore but they can use this leak to their advantage. Arlie is bummed out by this because he really wanted to work with her.

Arlie – This is me looking after you bro.. Neda told IKA and Ika told Andrew.. If that ever comes up just say Neds or Ika are a f***g liar

Arlie says after this week they can start putting together something with Adel.
Arlie – “i’m putting together a group and it’s going to F****g work.. delly is in it (Delly = Adel)
Arlie – Wanted Neds in it but not now..
Jon – Bring Sarah in it
Arlie – She is at the top bro f*** real
Arlie “this will work just change your opinion of Andrew.. I want to kick Andrew out of this house.. but next week”

(It’s tough to watch Big Brother Canada from the US. Circumvent the Geo Blocking and watch the Show and the Live feeds straight off Slice’s website. Using a pay VPN is very easy and free of malware, I do not recommend using a free service as these are notoriously trouble. $11.00 A month Sign up here

Adel confronts Paul about going up to IKA’s room and you told IKA about the special power not being very good.

Paul – Listen.. I said he has something it as to do with the veto but he will tell you about it.
Adel – I set you up so perfect.. how can you tell her anything.. why would you tell her
Paul – I never told her anything about it

Paul needs to leave, he is the worst ally ever and he has thrown Adel under the bus every chance he gets. I despise player like that with no loyalty. Good riddens to bad rubbish Im praying they can get rid of him this week

Kenny got Hot Slut of the Day on the website Dlisted. Simon and Dawg – not sure if you find this newsworthy at all. The article is pretty funny.

Hey fat Ass (Sarah ) … I don’t see you winning
Any challenges lol … Ya eating cookies is going
To ruin Heathers Ability to win challenges…
Is she retarded ???

i hope paul stays and gets out andrew.

Every conversation with Paul and Adel is funny. Adel rips Paul a new one then he tells Paul his Plan to save him.

I just have to wonder what Paul was thinking, look at his web, looks like he had a good scam going on as a speaker, no way I would ever pay for a speaker like him for my company. Once again one who thought he would self promote in the game to make him worth more than what he is, vs in there to play the game and guess what……backfire……how bout you call the next cancelled booking racist cause they saw you were a fool….

As Skyler White would say, I just gotta bide my time and wait…for one of the F5 to be evicted (preferably Andrew)

I think Adel was on the show Dragons Den (in America its Shark Tank) for his tongue to teeth or teeth to tongue thing ….whatever the mouth contraption is :D.

Yes he was and all of the investors laughed at him

I love Adel, but he needs to drop Paul

I”m confused… is arlie with first 5 right now, or with the new alliance with jon and adel?

It appears Arlie has figured out the pecking order and he’s 5th in 1st 5. This might be a real attempt to realign the house by going after the cool kids at some point. I’m skeptical to say the least as they seem to be including Sarah, a big mistake IMO, as she is likely to blab to Brina at minimum or Kendrew as well.
Like all these woman Neda could not keep her mouth shut! Now the Joneda thing is going in the crapper. Can’t anyone shut the f*ck up for their own freaking game? This is another example of how the not so smart shot themselves in the foot. And Neda may have had more BB smarts in this house than anyone.

And this is another example where I cannot find a fav to root for! 🙁 🙁 🙁

Paul.. worse player ever, I was going for him but he is just so terrible and can’t stop sqwealing he deserves to go

The funny thing about Paul is he thinks he’s got mad game.. Hopefully he get powershifted out of the house soon

Paul is an embarrassment to him self

Can someone explain what neda is lying about? Not really following..