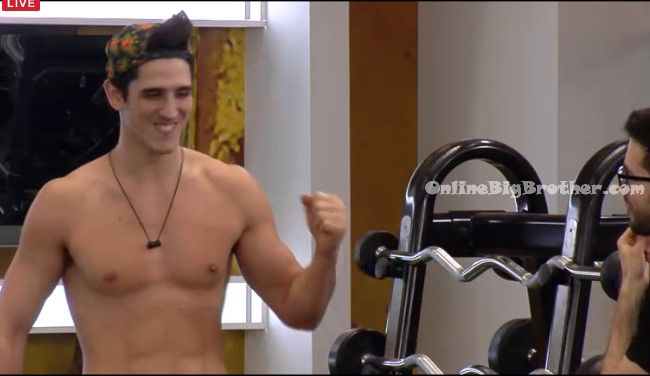 12:40pm Out in the backyard – Jordan and Zach are having a Newport meeting. Zach says if he comes at me, I can say this guy (Bobby) is coming for me. He talked to Ashleigh about coming for me within a week or two. I was on his radar because I was so close to her. Jordan says if Bobby said that to Ashleigh then he probably said the same thing to Bruno. Zach says Bobby said I would take Willow. He was selling it. This is perfect. This is what fuels the backstabs! Obviously he’s playing way down the line. Now is the time to cut him. Jordan says yeah beat him to it! Zach says I want to win HOH so badly! Jordan says his game play is .. like in the comp yesterday he was obviously faking it. He was stomping so loudly. Its surprising other people aren’t noticing. Zach says I can go to Bruno and Godfrey and tell them Bobby is flipping on the guys, now’s the time to take him out. Zach says if its anything kind of physical I can beat Bobby’s ass. He doesn’t want to win HOH again. He thinks it was winning HOH that hurt him .. its his game play. Jordan says Bobby is delusional he doesn’t see that Ashleigh isn’t going to take him to final 2.

Bruno and Jordan walk “the trail” in the backyard and talk. They talk about Johnny going home this week. Jordan says if you see me with him, don’t get worried. I am just trying to appease him. He is going home, unless he gets a Canada’s veto or something. I love this guy. And if this was who you liked the most he would be staying here, but its not. 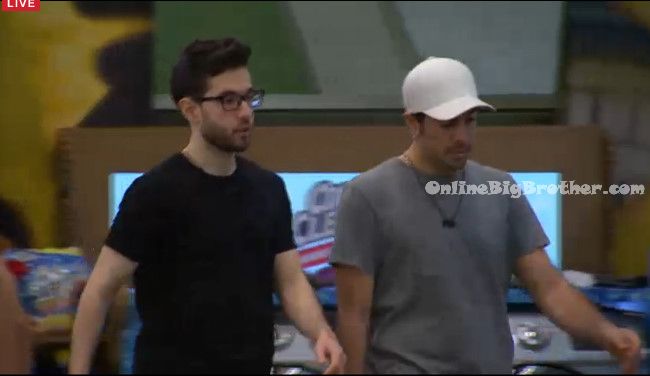 1pm – 1:15pm Up in the HOH room – Pilar is painting Willows nails. Willow says I wonder if Zach and Ashleigh have had s*x. Pilar says that Kevin asked me to be his big brother girlfriend. Ashleigh joins them. Willow says Kevin asked her to be his BB girlfriend. Ashleigh says with all the cameras there’s stuff you can’t talk about. Ashleigh says no matter who wins HOH this week .. Godfrey is going up. That’s a given. Who goes up next to him is the question. 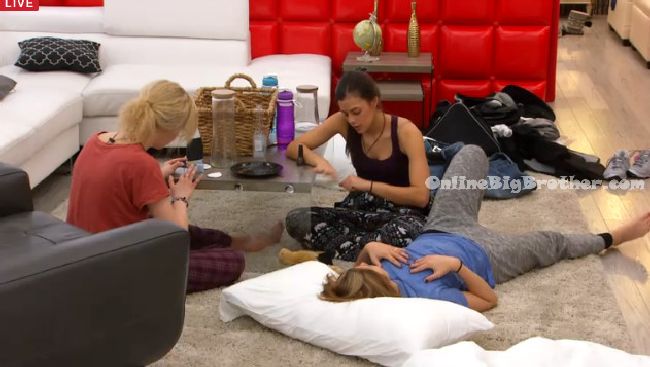 1:15pm – 1:25pmBruno asks if Johnny has come talk to her yet? Ash says no. Bruno says he is telling everyone that all the girls are working together. Ash says I heard that. Kevin joins then and the conversation ends. Ashleigh says Godfrey has an amazing butt! Bruno says yeah he does. Kevin says yeah it’s a great bum! Ash heads inside. Bobby and Pilar join them. Bruno talks about the birth of his children. The conversation turns to talking about movies. 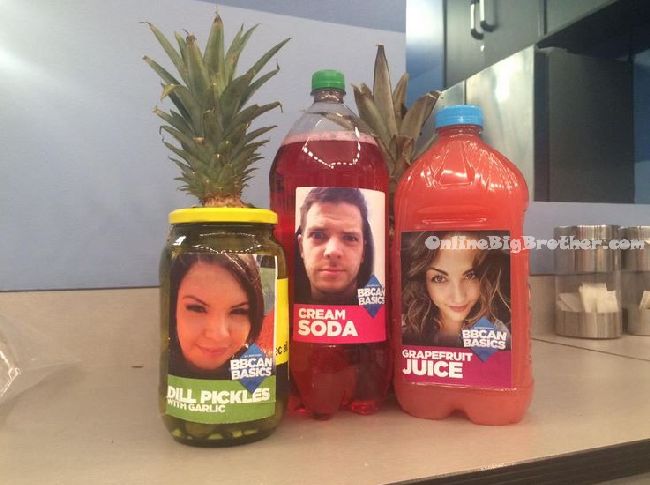 1:40pm Big Brother blocks the feeds and when the live feeds come back the house guest found 2 liter jugs of pop / juice with fans faces on them. They also put faces on the pickle jar. Big Brother also gave the house guests food. Sounds like their punishment is over for disrespecting BB and breaking mics. Willow says this girl can’t be a fan, she’s a model. Bobby says she’s so hot! They talk about how the one girl looks familiar. Willow thinks her name is Vanessa or Paige. (It’s Pauline)

2pm – 2:10pm Jordan and Zach start running in the backyard. Jordan says I want to meet that girl! She’s gorgeous! I am taking that picture and putting it in my bag!

2:15pm Bruno and Jordan head out to the hot tub room. Jordan says its cool to see new faces. How cool for them. Bruno asks so you recognize some of them? Jordan says they look familiar from contests and other things. Zach and Bobby join them. Bobby comments on how the one girl (Pauline) looks like a million dollars. They head inside. Zach, Kevin and Jordan sit in the backyard. He tells Kevin that he’s working on getting Bobby to throw the (next) pov. 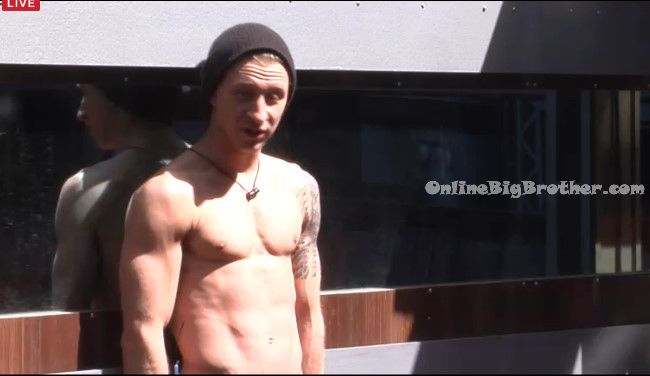 2:35pm Out in the backyard – The house guests write HBD BI with pillows in the backyard. (Happy Birthday Bruno Ielo) When they’re finished Pilar and Willow lead Bruno out to the backyard with his eyes closed to show him the message. The get him to stand on the weight bench to see. He’s surprised and thanks them all. 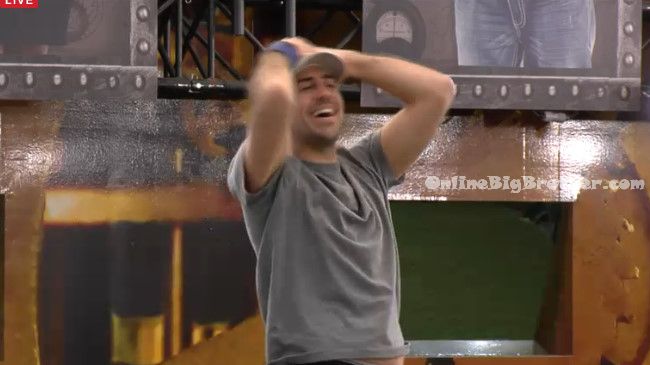 2:50pm – 3pm Zach talks to Sarah about how he stepped on a spike in the backyard. Sarah tells him to always wear shoes. He says yeah but he likes going barefoot. Zach and Sarah then notice that the vault panel is on. Zach says “Maybe a twist is coming” Big Brother tells them not to talk about production. Bruno joins then and says he noticed it was on this morning.

When Will sees Kev,Ash,Pill,Zach and Jp together
Willow- What are you guys doing? Is this an alliance? I’m in!
LMAO She is my new FAV girl in the house

You know…for Newport to always be saying, “We should never get cocky/comfortble”…they are acting pretty cocky and comfortable. It is hard to root for anyone in this game. I was supporting them in the beginning…but they need to stop being so obvious (about their not-so-secret meetings and throwing comps) and stop acting like they’ve got this in the bag.

Maybe after the house turns on them and they actually have to work at winning back-to-back comps to stay off of the block and save each other…will I be able to get behind them again. For now, I’m feeling “meh” about them all. Hopefully Naeha will get back in there and stir things up.

Why do people keep picking double veto??? He’s NOT going to use it unless production somehow makes him. What a waste.

Agreed! This twist is a HUGE failure… from all the mistakes about what it was to the high percentage chance that it would not affect anything at all. If the veto winner had been someone else like Sarah or Johnny then they definitely would have used the double veto to take themselves off. Sadly Bruno isn’t going to use it since he doesn’t have to and already stated a thousand times he’s keeping the noms the same… It should have been a forced double veto or a forced single veto.

I had hoped for Brittnee to win the veto because then she could take them both off and still be safe! But that all went to hell. Who knew Bruno was such a competitor?!?!

You know there’s always a chance that BBCAN production can lie and say that the forced veto was voted the most and just do that, if the they feel liked they fucked up the twist and to avoid the the angry fans. They can basically do what they want they are the voice, just a thought.

I’m not so sure. There has been a lot of confusion about what these vetoes actually mean and how they are used. Arisa said one thing and BB explained it differently a couple of days later. Reminiscent of the April Fool’s Day joke and the last HOH comp. Sketchy at best. They finagaled their way out and I think they’ll do the same with this twist.
They (BB production) keep backing themselves into a corner and try to get out, at any cost. I also think they see how many fans are losing interest…not only in the players and production, but the game itself. It no longer represents “Big Brother”

That’s what I thought it was with the forced one as an immediate veto…so win the veto use now…no waiting for the veto ceremony. That’s why I choose this one and not the double…turns out ok for my vote with the way things turned out(Bruno winning)but the votes did not go to that choice…so yup wasted twist

Hey never say never, and I was hoping that someone like johnny or kevin or britnee would win and it would force bruno to put up zach and jordan. But never say never if production plants the seed that zach is coming for bobby and bobby convinces bruno to do it, we could see zach and jordan on the block together and one go home.