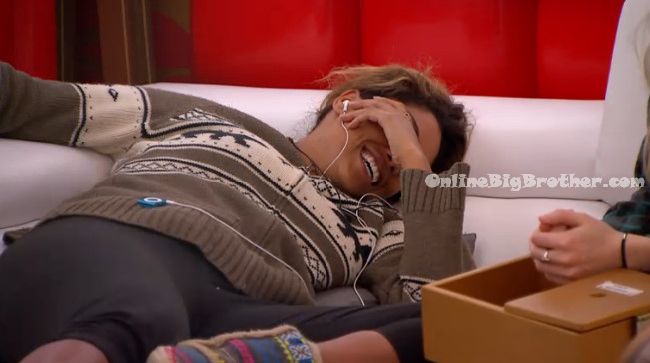 9:40am Big Brother wakes up the house guests. Zach tells Jordan that his dream last night was about JP stealing his wife. Jordan says well thats what I like to do swoop in and steal your girl. Some times dreams predict the future. Johnny asks Zach if he woke up fearing that same problem as yesterday? Zach says no. Up in the HOH room – Britt tells Sarah and Ash about how Risha c*ck blocked her from a “really hot french guy.” 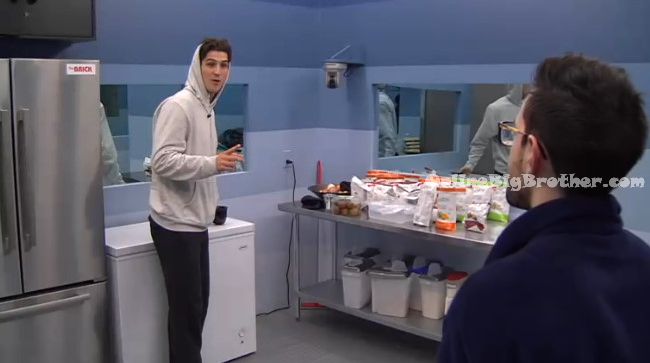 10:10am In the pantry – Zach tells Jordan that Willow HAS TO GO! Ashleigh told me that she is starting to learn this game. She’s smart. Ash trusts me 100%! Willow tried to make a final 3 last night with Ashleigh and Pilar. Jordan agrees she has to go. And she’s tried to make a final 3 with me, you and her. Zach says it would be really really easy to blow up her game.

10:30am – 10:40am In the bedroom – Pilar asks Ashleigh if she had another good night? Ash asks why? Pilar says because you’re all smiles. Were you up kissing? Ash says just a little bit. Ash collects all the stuffed bears and gives them to Willow. She says she has friends again. Ash leaves. Willow says she has an eight person alliance, might as well call it the bomb squad (Big Brother 16 alliance reference). Godfrey says wow, can I join? Willow says yes.

In the kitchen – Zach tells the others about how one time he was called into surgery last minute and was told not to eat or drink past 12am. He says he was out with his buddies drinking and kept going hard till 12:30am. The next morning he showed up super hungover at the hospital and the doctor asked him how much he had to drink. Zach says he said 3 … maybe 10. He says the doctor told him they would need to reschedule it. 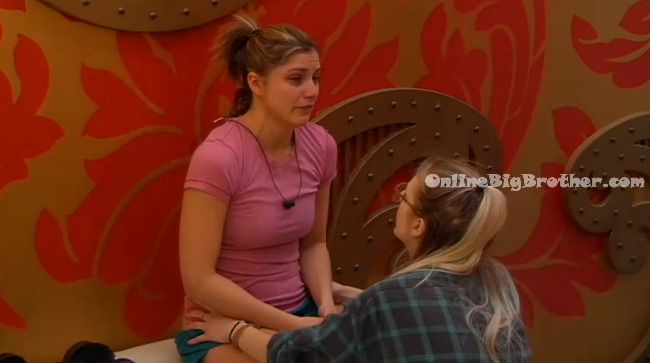 11am – 11:20am UP in the HOH room – Willow is having a melt down and crying. Sarah tells her she is doing so good. Willow says she feels bad. Sarah says that $1000 is a lot of money. But its not life changing. They talk about how some people make fun of Godfrey. Willow says its day 20 .. how am I supposed to get to day 75. Sarah says its just cultural differences. She says that Godfrey is such a beautiful soul. Sarah tells Willow that once they get out of here we will have lots of opportunities to make $1000 in a couple nights. I know its more than that, its about the HOH thing. Sarah says that Godfrey was just so excited about beaters (Bobby gave Godfrey a bunch of tank tops). Sarah tells Willow that God is good he’s young and lives in a good city, Toronto. He is taking it with a grain of salt. Willow says I don’t like trust him. I know he would put me up. Sarah says and that’s okay its a game. Sarah says he knows you’re there for him. You talk to him like a real person. I feel exactly the same way as you. Willow says I don’t want to hurt anybody and I don’t want to embarrass anyone. Sarah gives Willow some tough love. Willow says I feel like Zach would turn his back on me. Should I go after him? I don’t know?! Sarah tells Willow Zach wouldn’t do that to her. Britt joins them and asks if everything is okay. Willow says she just feels like there’s no way I can win this game. Sarah tells her this game is a roller coaster. Willow says I just woke up and thought… we helped Zach win that yesterday. They talk about how because Zach won the challenge yesterday he got the $1000 and a Head of Household advantage. Britt says we don’t know what Godfrey would do with the HOH. 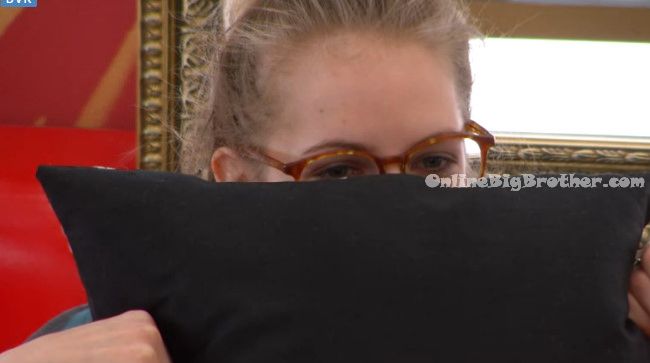 11:25am – 11:45am Zach, Kevin, Johnny and Jordan join them in the HOH room. Willow leaves. Jordan says this is for the show we need to do the official Purple Cobras (Jordan, Zach, Johnny, Kevin, Sarah, Brittnee) thing. They all get into a circle and do their alliance symbol. They talk about Willow and why she was upset. Sarah says that Willow has put herself in this position and hasn’t gotten close with anyone. Jordan asks if one of us wins HOH, who do we put up? Bruno and God and then backdoor Bobby? They agree they have to go after Bobby. Jordan says and if we get to pick havenots we need to put him on slop.

Why would Ashleigh tell him that? She needs her own deals and alliances of protect herself early in the game, and putting all of her eggs in Zach’s basket is not a good idea. She is gonna be used and cut like Diane in BB5 and Neda. Ugh.

Almost lost all of the guys are awful this season (except for Johnny and i still give Kevin the benefit of the dount) Even i like Andrew better than Graig.

Never been a fan of Willow but as for now she is the only person I can think of that can blow up Jordan and Zach’s game. Seriously I’m rooting for Britnee, Sarah and Johnny but they are just reminding me of Nicole from last season of BBUS.

And for those people that think that not booting Bobby over Graig out now is a mistake, I honestly can’t disagree more. Granted Bobby is more of a competition threat than Graig, but he is more powerful in terms of dynamics in the house. Graig is the ‘glue’ between the other three girls and the meatheads, and even if they win the next HOH and eliminates Sarah or Johnny, the rest of the girls can now go after the rest of the meatheads if any of them wins. That will not be the same if Graig is still in the house. Graig has a very strong personality that can intimidate people. Remember Rochelle eliminated Ika from season 2 because she was scared that Andrew and Kenny will go after her next, Pili, Ash and Willow all have tendencies to be Rochelle 2.0. If Graig stays and any of the PAW wins the next HOH, for sure Sarah or Johnny will exit the BB house.

The Purple Cobra alliance is so stupid. Will they even be allowed to show their dance on tv since it is a blatant ripoff from the movie Dodgeball. Does JP do anything else with his life except watch reality tv and movies that he now needs to act out? Pathetic.

lol of course of it’s a ripoff. jp is literally ON reality tv, making money. it’s absurd to call him “pathetic” for his love of tv when you yourself are clearly a huge bb fan posting on this page…

I’m not a “huge” bb fan. I enjoyed the first two seasons of this Canadian version but stopped watching the US one a long time ago. I come to this website to keep up to date because I don’t have a lot of time to watch feeds. JP’s whole life seems to revolve around Survivor and Big Brother, he never stops talking about past episodes and cast members. He even said having a showmance was on his bucket list and that’s the reason he kissed Sindy, not because he genuinely liked or cared for her. The guy is pathetic.

Wait can someone please explain to me the Godfrey tanktop Bobby ??Im really confused…

Yesterday the HGs were in the living room joking about getting clothes from Big Brother. Godfrey said he wanted some clothes and went into the diary room to ask for a pair of shoes and shirts. When he came out he said they would put in the request. The other house guests laughed that he asked because they were joking. They said BB takes our clothes they don’t give us clothes. Bobby then went up stairs and grabbed a bunch of his tank tops and gave them to Godfrey. Godfrey was really excited. A few free tank tops was a big deal to him. Willow was upset that other HGs make fun of Godfrey some times and was sad that something as little as a tank top was a big deal to him.

I’m rooting for Sarah, Britt, Johnny, and Kevin. I’m hoping (preferably if Bobby gets evicted next week) the house will start comparing notes and turn on Zach and Jordan.

I’m really dissapointed in The girls minus (Sarah, Britt, Nae). Ash, Willow, and Pilar are puppets.