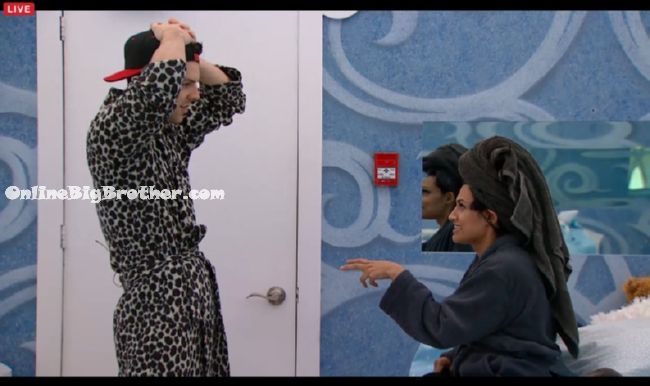 Alliances in the house 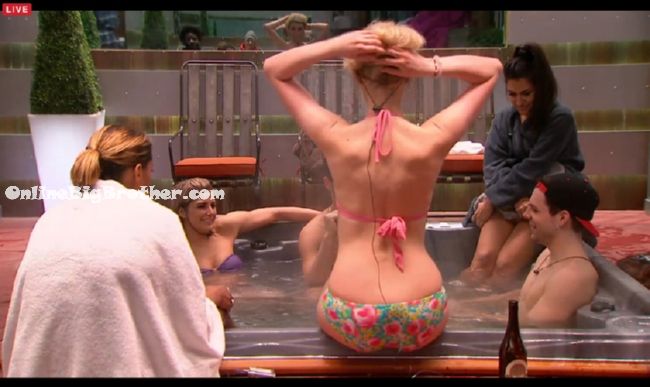 Chit chat about Sindy not sticking up for herself when people were accusing her of breaking the camera. 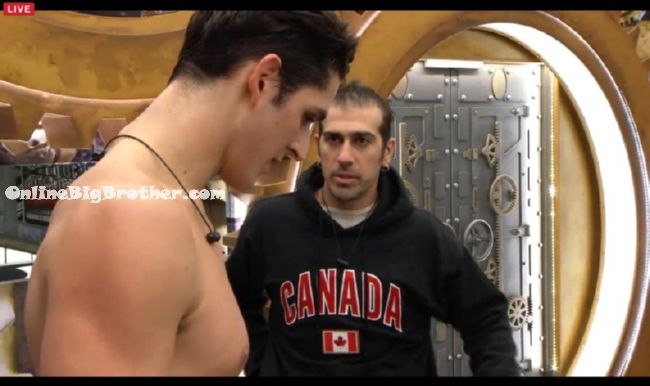 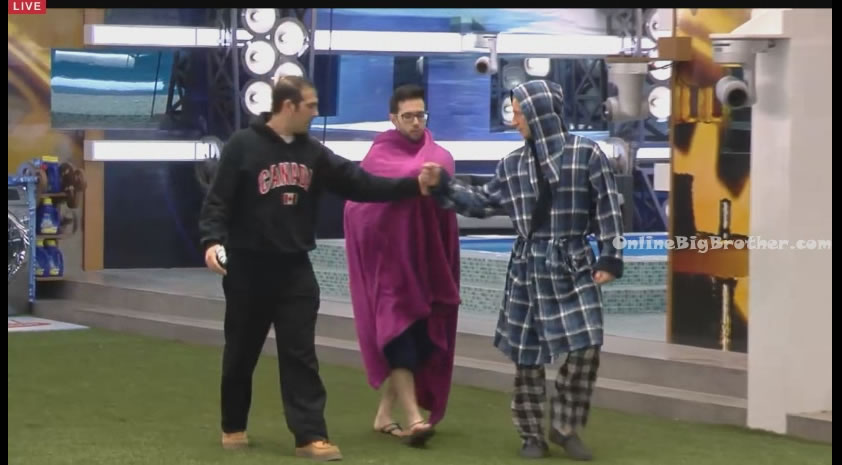 10:18pm Backyard Bruno, Bobbyand Jordan walking around fist bumping
Bruno asks him if all the other guys are on board. They agree and fist bump. bruno says it would have been nice to win but this is so much better because they all get to compete in the next HOH. Jordan agrees tells him he has his back.

Bruno says he really respects Jordan and from day one he knew he was a good guy.
Jordan – 10 year from now I want to be like you
Bruno says he hopes his kids turn out like Jordan. 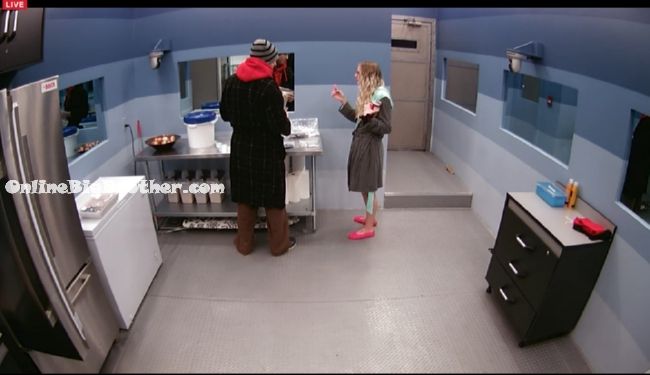 Graig is scared by Naeha adds that she put Godfrey and him up on the true/false competition right away.
Sarah – She’s very intense she thins she can bully me around
Graig tells her she’s gold this week he knows she is, “I know he’s going after Naeha.. don’t repeat that please”
Sarah – I swear to god 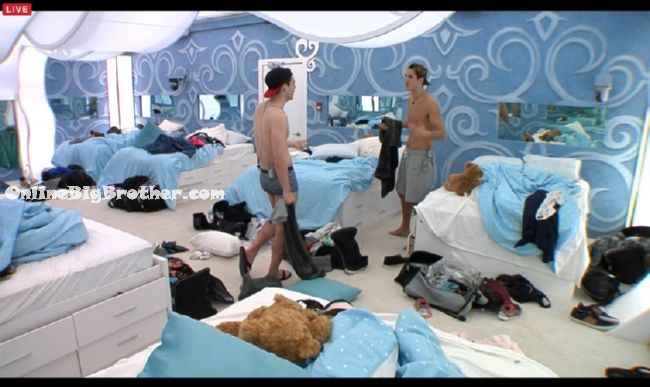 10:28pm Kevin and Zach bedroom
Kevin saying he couldn’t throw it he’s so pissed. Zach says he was throwing the HOH.
Zach – If you put Naeha up I’ll do whatever it takes to play in that competition and if she (Naeha) gets houseguest choice she’s going to pick me”
Zach adds if he wins the veto he won’t use it “She’ll be mad”
Kevin thinks about putting Sarah up as a pawn.
Zach says it’s good that Kevin won it because Zach is really close to Neaha and the house will preasure him to put her up. Now if Zach wins the HOH next week he can take out someone for kevin. Zach needs to talk to jordan he thinks he’s down with taking Naeha out this week.
Zach – If you don’t put Neaha up you’ll feel a lot of heat in the house.
Kevin – that’s OK

Kevin leaves tells him they are on the same page.

10:36pm bedroom Naeha and Brittnee
Naeha freaking out.. because people were laughing about what happened with Sindy and Godfrey.
Neaha – I’m staying this week.. I don’t give a f***… It’s game on .. he was blasting me..
Naeha – “I can’t believe Sarah”
Kevin joins them and Brittnee leaves

Kevin and Naeha in the bedroom. Naeha telling him if he hadn’t won the veto he was going home. 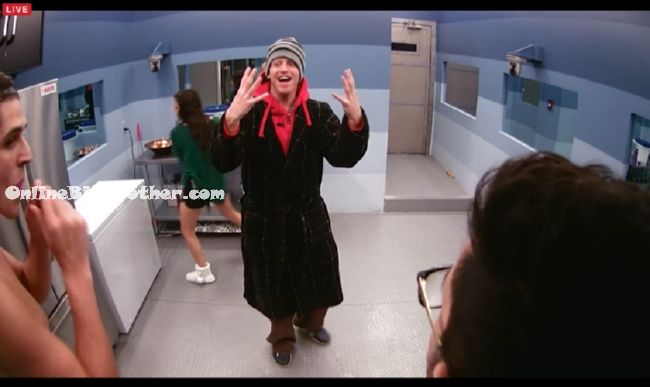 10:44pm storage room
Zach telling Graig after Naeha goes they have to start chopping the floaters like Godfrey, Brittnee, Sarah. Graig agrees
Graig says he’s talked to Kevin he might put up Johnny. Points out that Kevin is distancing himself from Naeha.

Zach brings up that he told kevin if he puts up Naeha this week than next week he’ll put up Jonny.
Jordan and kevin join them.. chit chat..
Zach saying he’s so glad he doesn’t have to flirt with sindy anymore it was exhausting.
Jordan mentions for these these last couple days “you’re welcome” 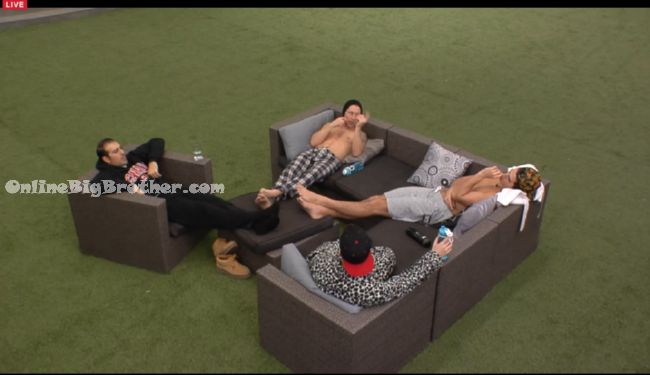 Talking about the cheers for Neaha. Jordan joins them agrees they were hearing some major cheers for Naeha, ‘They sighed when she lost”
Jordan thinks it’s because they just aired Godfrey freaking out on Sindy and Naeha was going after Godfrey so it was underdog cheering.

Kevin is an idiot doesn’t he realize the only reason the boys are even talking to him is b/c he won Hoh I didn’t see them ”broing” it out before or after he was on the block and they wanted him gone lol
I thought a poker player could read people well???? He is going to look like such a fool with the whole jp sham

Honestly, I always think these players seem like complete morons, however when the episode airs and you see their actual opinions in the diary room where they explain how they are playing certain people, it tends to increase their game IQ. Hopefully britnee starts to wake up and start to play the game. She doesn’t seem worthy of the floater title. She needs to be all “it’s Britnee Bitch!” show them houseguests what a Calgarian chick can do!

You feel like you really get to know the houseguests in the DR?! Lol production gives them scripts for those and also usually gives the houseguests more information on the situation than they previously had. The DR is the only time I DON’T believe them

nowadays Diary rooms are almost completely scripted and if they’re not the houseguest are not forthcoming with the truth. Just look at last years Derrick he actively lied in his DR’s to help manage his edit.

if kevin puts up naeha this would be an ika wong hoh all over again.

because it is an instant eviction, kevin already nominated the people. Neaha is one of the nominees. i was at the live show and we got a sneak peak

Do you know who else he nominated, or are you just not saying? I really want to know!

I call Bullsh*t on this

Kinda ironic how zach and graig agree that they need to get rid of floaters yet they haven’t won a single competition.

I actually think Kevin knows his alliance with JP is a joke, he just hasn’t spoken that aloud. Perhaps the joke is actually on Jordan. I am just waiting/can’t wait for a DR admission of this. Did anyone else feel that the eviction process and all the gesturing and exchanges was really contrived or scripted while the HGs entering and exiting the DR to evict? It was almost too obv.

If JP is as smart as he seems to be then he’ll convince Kevin to put up people from the chop shop like Bobby and Graig.

Canadian to the core
Reply to  BlingitonBB

WOW, ok she is an immigrant to Canada. One of the best things about our country is the fact that it is multicultural, and we love the fact that people try to learn the english to live here. There are lots of different accents in the world and I think that her grammar is actually pretty good. Careful american you’re showing your colours and we in Canada won’t stand for it

No – she actually mumbles or slurs as she speaks through her nose at the same time. It’s got nothing to do with an immigrant accent. It’s a lazy speech pattern and it drives me nuts!

Canadian to the core
Reply to  idar2dream

This from the person who spelled “dare” are dar? haha talk about lazy speech patterns

Listen moron: “idar” is part of my Scotts heritage. It means “I dare” in Gaelic. My family members use it in various ways including a business name. Grow up “STUPID”

Sarah is just awful. I was really rooting for her but Naeha bullies you Sarah?? Yeah? Christine 2.0

I think she said it to distance herself against Neaha, just like how Naeha suddenly stopped talking to Risha when everyone is so set on voting Risha out. It’s a good game move, but with Kevin being stupid and nominating Naeha and Sarah (if the rumors are true), this season is turning out to be a repeat of the boring BB16.

Kevin has no idea JP is playing him… kev is really bad at reading people. I think the best move is get out Sarah.

since Kevin seemed to have nominated bargain, let’s hope she comes back into the house after her eviction with some sort of coup’d star power.
Also I hate graig

what’s the hype with Zach? aside from his good gameplay, is it only me but I don’t find him attractive at all
he reminds me of the wicked witch from Oz

Zack kind of reminds me of Drew from BBUS5… and using Ashleigh like Dianne was used. Only Ashleigh is nowhere near the beast that Dianne was.

Willow is so annoying was she cast because to annoyed us all i think so.

some have admitted that they are led towards saying things in DR. Like first they’ll be asked the question, they answer, then the prodducer will say a ‘what if’, or give them another type of answer in case things go a different way, so they end up saying 2 completely different things, one is their true reply. the other thing is that the editing is meant to lead the tv show viewers a certain way, usually opposite to what live feed viewers know to be true. that is obvious of course

i felt that Naeha and others are aware of the TV show part. \i felt that she was deliberately talking about how keeping Sindy would be a great idea in order to get more TV time, because it was clear here that the vote was getting Sindy out. if no one ever talked about keeping Sindy then the show can’t be edited to indicate there is any doubt. she gets more airtime in other words by these remarks, if no one else is debating things.