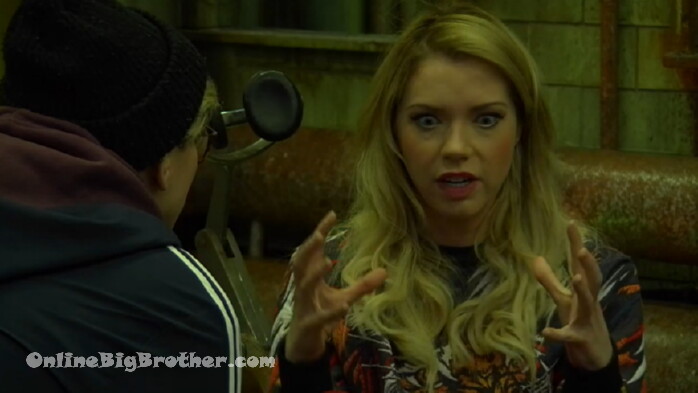 Big Brother Canada Spoilers – Sam used the power of Veto on KIKI. Chelsea nominated MommaK in her place. Kailyn is the target. 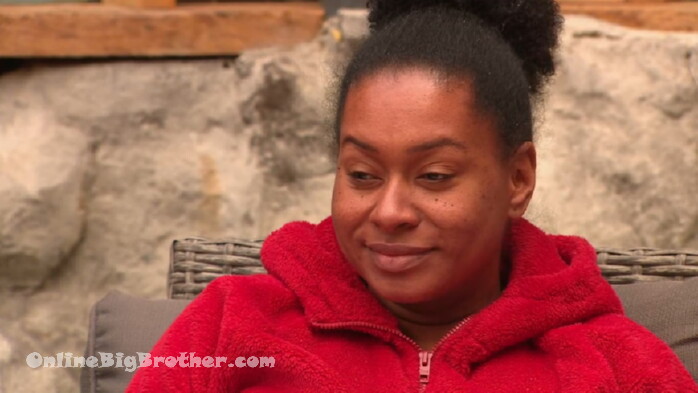 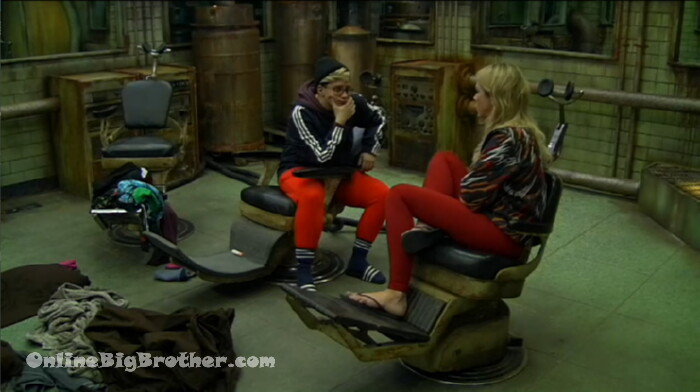 1:50pm Cam 1-2 Kyra and Chelsea
Kyra says Anthony makes them feel like their game is so shit they need him as their mentor.
Chelsea – please know I trust them 100% I can see that this house is still going to look at you as a target but the thing is sh1t changes so fast
Chelsea – I don’t know if anybody else is picking up on this he is going to be someone that is….
Kyra says anthony has managed to get everyone to talk good about him.
Kyra – even Dane..
Kyra says Anthony gave the same speech to Dane.
Chelsea agrees thinks he’s done the same thing to everybody.
Chelsea – he came up to the room.. And was like OK what will she say what will she do how do we get in front of it. (Kailyn being on the block)
Chelsea mentions how she’s been in front of it all week, “what’s what I’ve been using this week for”
Chelsea says Anthony is making it feel like you are indebted to him in a way
They agree to make Anthony feel like he’s in control, “play along”
Kyra – he finds people’s weaknesses and says I’ll help you I’ll guard you so you are thinking ohh my god I can’t play this game without him
Chelsea – he’s like this is what you need to do
Kyra – I let him get into my head these last few days and I felt weak
Chelsea – what is he really doing..
Kyra – he never says names
Chelsea – he says ‘I’m working with a couple people’
Chelsea mentions asking Anthony who he would put up and he said Mark/Eddie
Kyra – I feel safe with him right now
Chelsea – so do I .. I would like to keep playing with him but dude..
Chelsea started to clue in on Anthony during yesterday’s conversation, “what’s he really doing.. What’s he really planting is it to get good with everybody or is it something else”
Kyra – he was trying to turn me on you guys .. right .. trying to make me doubt Sam and Adam.. maybe he’s after Sam and Adam.
Kyra – keep your enemies close…
Chelsea – maybe..
They agree Anthony plants a lot of seeds when he talks to them.
They agree about Anthony being very condescending, “he talks to me like I am a child”
Kyra – we need to keep him thinking we’re playing along with it
Chelsea says it’s hard for her once she see’s what someone is doing. Kyra agrees says it’s brutally hard for them to “giggle” with KIKI and Esti
Chelsea – oh my god..
Kyra – you know how hard it is for me to be buddy buddy to DANE when he is the one most out to get me. He lied to me all week.. I have to pretend …
Kyra – if I won Power of veto and HOH I would backdoor DANE
Chelsea – it’s smart..
They are worried that Anthony might go to MOMMA and get her to stir things up before she goes.
They are both thinking they are good with the “Girls” (esti and KIKI) they don’t think Kailyn is going to be able to start sh1t with anyone that isn’t already against them.
Kyra says they have to be careful what they tell Sam she is a very poor liar.
Kyra says Sam told DAne stuff that Kyra was playing dumb about.
Kyra feels like she could get very close to Esti and KIKI
Chelsea – I wonder.. If we did switch it why don’t we fake something
Kyra – ohh you want to pretend we’re against each other
Chelsea – you can’t do that in the house so small
Kyra – it’s too big of a lie this early on.
Kyra’s plan is to continue to flirt with KIKI and Esti.. Esti has told me a bunch of times she’s curious like a lot.. I don’t want to get Dane annoyed
Chelsea – that’s her strategy

2:10pm Back to CHelsea and Kyra after a 10 minute break listening to 2/3rds of the pretty boys playing pool.
They are still talking about Anthony and how he never talks to pairs.
Chelsea – he’s trying to separate us
Kyra tells her how proud they are of her. “you did a great job all week, you are powerful, your are strong, you are smart, you did a great job. .. You’re like the reigning f*ing ice queen. you heard people out and you weren’t entirely condescending ” 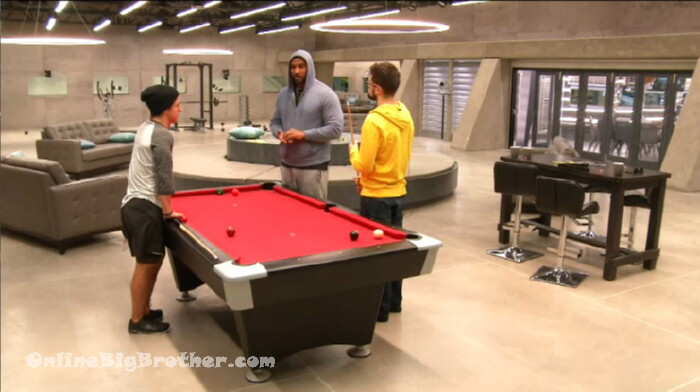 1:56pm cam 1-2 Anthony, Mark and Dane
Dane – Sam needs to go next week.. (Did Dane hit on Sam and then get shot down or something. He really wants to her out)
Dane – do you all not agree with this
Anthony – I’m very hopeful.

Anthony presents them with the theory that the girls could all form up, Esti, KIKI, SAM, Chelsea, Kyra. They could start coming after the guys.

Dane going on about “having” esti and KIKI. They told him that they wanted to put up Adam and Sam on the block so Adam doesn’t win the veto and uses it on Sam.
Dane – I don’t know how to spin that off.. 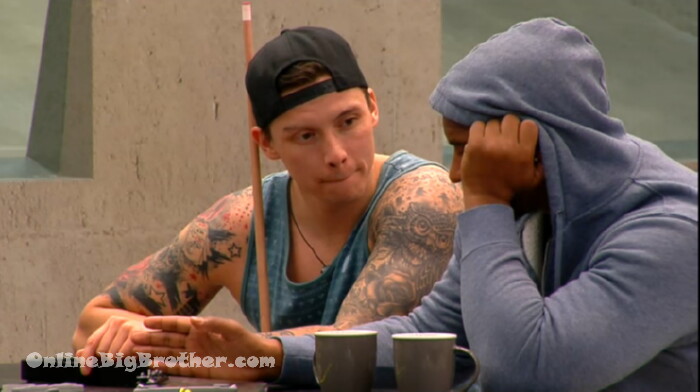 2:23pm Cam 1-2
Anthony tells Damien that it’s looking good for him. He’ll now have a easy target in the event he wins HOH like Kyra does.
Anthony says people really comment how calm he is when on the block it’s helping him, “this is who you are you’re not hurting inside.. A lota people are talking about the MA situation apparently she stirred some things up with those girls. They really really want her out they are good because they never said nothing.. 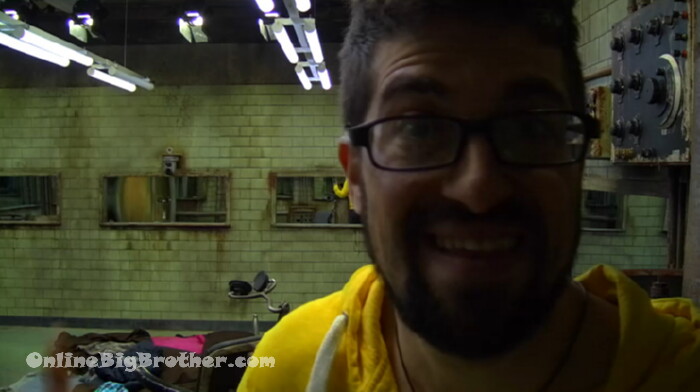 2:40pm Mark alone in the have nots

Mark – right now my relationship with the girls is not good (girls = KIKI and esti)
Mark – they are straight outta failed acting school if they think everything is fine.. Cause honey I can tell something is up.. Which is good.
Marks plan is to have DANE get closer and closer to the girls then he just has to focus on getting close to Dane and Dane will filter the information to him.
Mark – there will be blood figuratively not literally if there was real blood someone would get kicked outta the game. Very bad don’t want that to happen.
Mark – my idea this week is to lay low and solidify my thing with Chelsea a bit more
Mark – my perfect final three is my Chelsea and Kyra .. the problem is the PB boys are way dead set on the slightest of those things happening
Mark is going to play along with the PB boys and keep planting seeds and ideas. 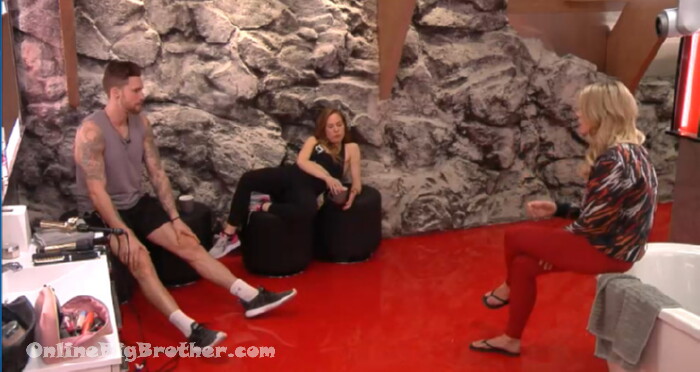 4:00pm HOH Chelsea, Adam and Sam
Chelsea is saying they can team up with the girls and Dane but she doesn’t think Dane will pick them over the girls.
Sam doesn’t think they have Anthony on their side. Mentions she can’t think because of the slop brain.
Chelsea – when I think of who I am working with it’s you guys..
Adam says “the boys” don’t consider Kyra as part of their group
Chelsea – with mommaK leaving who is still working with her to split this.. To make us a bigger target
Adam – the three of us?
Chelsea – yeah that’s who she is going to gun for.
Chelsea – I feel that I really trust Cory and Anthony but I’m suspicious to everyone other than you guys
Chelsea – Mark is so shady..
Sam and Chelsea say that Anthony will blindside them.
Adam – he won’t come after you guys.. Definitely not Anthony
They think Dane will go after Cory and Kyra
Adam says 100% Damien will come after them if he wins HOH
Sam – Eddie would put us up..
Chelsea says Eddie would put up Kyra

Chelsea and Sam go on about not trusting Mark, “he’s so shady”
Chelsea – he’s doing a bad job of playing both sides..
Chelsea warns them that Anthony is having the same conversation with everyone 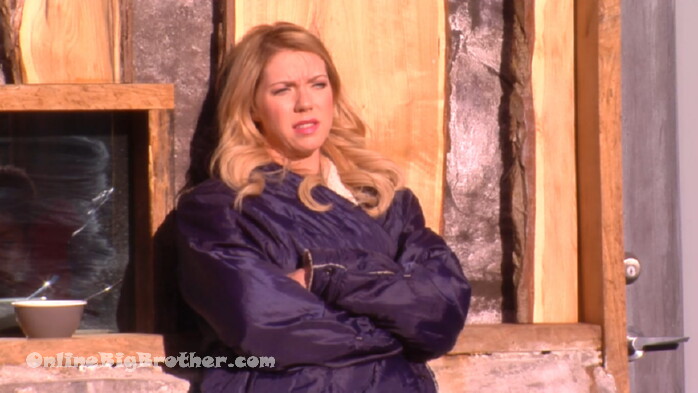 5:33pm Chelsea and MOMMA
Chelsea – “as a person I respect you” adds that a lot of the house is fake she doesn’t want to feel that tension.
Ma – I can’t roll over and die it sucks the person I’m beside I love..
Chelsea wasn’t avoiding Ma she was giving her space.
Chelsea says how tough being the HOH is, “We’re all human beings and we all want to be here” 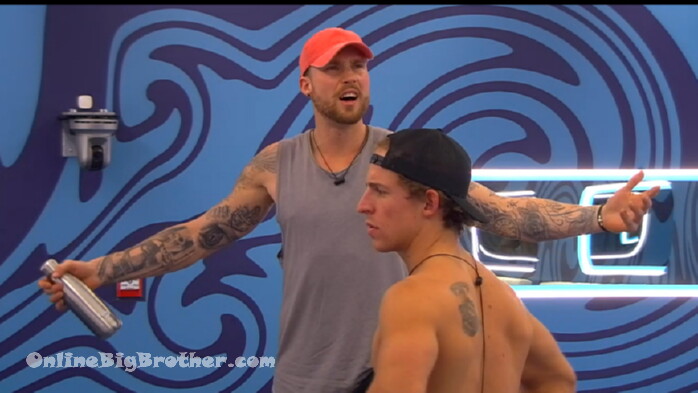 6:08pm Adam and Dane
Adam says Kailyn’s pitch is you keep her in the game and she will got after Adam and Sam.
Adam – just trying to f* with people’s head making them think we’re top dogs..
Adam – me, Sam and Chelsea are just 3 people.. we can’t do anything with three people we need numbers right now
Adam says Chelsea and Sam really don’t trust mark at all
Dane – mark is playing a little too much..
They agree it’ll be funny when the girls find out the guys were all working together
(someone in the house gets in trouble for talking about production. Adam and Dane thought it was them hence the screen grab) 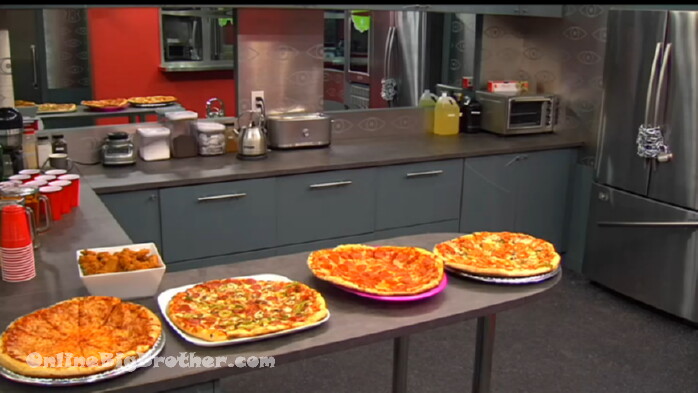 Arrivaderci Kailyn.
Glad to see her go.
Anthony is indeed condescending as Kyra pointed out.
Hoping tha Sam is the next to go
Ciao

insomnia sucks. just throwing that out there.
viewer vote thoughts: chances of a pretty boy getting it: about the same chances that i’m actually typing this in my sleep.
chances sam gets it: bwahahaha. oh. that’s funny. is there a less than zero chance option? i don’t think she deserves all the hate she’s getting, but she’s getting too much hate to be given an advantage.
kyra? if somebody gives that schlumpy sadsack an advantage…. kyra would still whine.
chelsea? she’s too attached to the sam and adam train so will lose by association.
everyone has already counted kailyn as gone so little chance there. though seeing how she’d use the information to say her spirit guides have given her a hit… nope.
added together i give everyone i mention a share of about 15% of the vote.
cory? doubtful. i’d give it a 5% shot. she hasn’t lit anyones fire as far as i can tell.
stef? realistically she’d be too timid to actually USE the info, and her face would give away what she’d learned. maybe a 10%
kiki? the non feed people have seen about four minutes of her on air in three weeks. in the background. when the camera was blurred. they aren’t voting for her, they’re asking who’s that girl that got nominated. still… maybe 20 % because she’s a nom still to episode only viewers.
eddie? eddie would do exactly nothing with the information, except keep it to himself and drop the occasional hint while floating to whoever the hoh is at the moment and lounging 16 hours a day? 20 % chance because of the diary persona they’ve got him playing.
damien? he already knows about the boys alliance and hasn’t done anything. if he is given every viewer advantage and somehow wins…. will he forever be known as the guy that didn’t play much but got viewers to play for him? in other words will there be an outcry of yeah, but what did he do to deserve the win without the viewer perks? still, viewers will likely give it to him at about a 30% shot.
okay. sleep attempt number 2, 312. night.