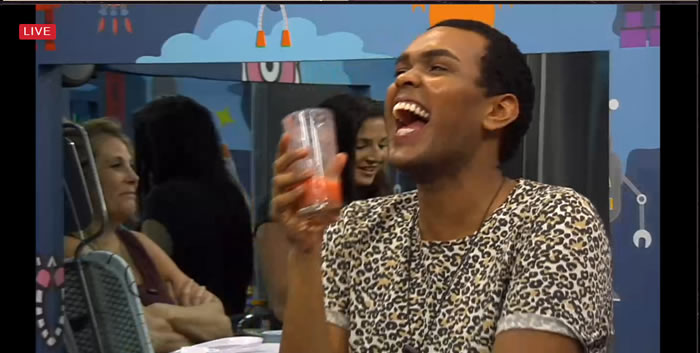 8:18pm Dre and Ika
Dre – Everyone is annoying
Ika says the person they would put Dre up against is Gary, “She can’t stand Gary” (Neda)
Ika tells her when she looks at Dre she see’s herself on season 2
Ika mentions how once they win HOH Neda’s side will crumble.

Ika says the reason Dre has trouble is because she’s real the people in the house that are feeling natural are fake to begin with.
They laugh that Jackie ha 5 personalities, sweet, victim, sassy, vengeful and one where she’s just a meek little person that has been manipulated.
Ika – I’m sure there’s more to come
Ika says if Dre feels bad about CAssandra she should just put it on her say that Ika isn’t going to vote to keep her therefore the votes aren’t there.
Ika – just win HOH… we have to
William joins them.
Ika – we’ll be OK guys.. We’ll be OK you just can’t go home.. The good news is we’re safe this week..
Ika says Emily and Dillon would be worst case winning HOH for William.
Ika – I’m not sure about eh boys.. If Neda is working with them she has pull

Ika tells them every week the target changes, “Whoever wins power she’ll run to them” (Jackie)

Gary – Jackie is acting like she knows a lot.
Karen says she told Jackie “Cass is going you’re staying”
Gary – why would you do that
Karen – so we’re not on the outs with Jackie
Gary says Jackie has a piece of toilet paper in her room that she has notes on. It’s her study sheet.
Karen – I told you she’s got to go

Gary comes in.. “There was a point today where we had Ika’s vote and Demetres”
Gary says Ika is going through her own personal turmoils right now about her kids.
Cassandra says that Dre told her Ika is saying that Dre is the target next week because she’s been talking to CAssandra.
CAssandra – Dre doesn’t think we can get Ika’s vote

Karen says she told Casss he’s staying and told Jackie she’s staying
Gary laughs “You need to lay low”
Cassandra joins them and Karen leaves.
Cassandra – you’re the only one that can get (Ika)
Gary tells Cassandra all they need is Ika and Demetres.
Gary – You f*** up .. so I have to go back.. don’t talk to her for the rest of the night.. Stay away from her and Demetres

8:40pm Emily and Jackie Hot Tub
Emily – are you feeling good about this week
Jackie – no..

Cassandra – 2 nights ago on Sunday Ika came to me and Said I don’t have the votes..
Cassandra adds that yesterday she said she had Ika’s vote and now today she doesn’t have Ika’s vote.
Cassandra – now Ika’s all mad at me.. you’re a liar don’t talk to me..
Cassandra – there’s til a lot of time left.. Should I call Jackie out
William doesn’t know “I really thought I could trust her” (Jackie)

9:04pm Kevin, Bruno and Neda
Kevin says if he wins veto he’ll nominate Dre and Karen.
Neda says if veto is played William or Gary.. “We have options”
Dillon and Emily join them.
Neda says Dre made an alliance ‘LA Cinq’ (The five) Gary, CAssandra, KAren and the french Connection. When Cassandra goes they ware going to try and pull in Jackie.
Neda – once Dre is gone we can talk to William more.. “Dre and Gary are so scary”

They decided on calling their alliance (Dillon, Emiy, Kevin, Bruno, Sindy, Neda) “Black and Saints” ( this is the name of Neda’s clothing line.. A bit much)
Neda says the name is “just random”

9:16pm Hot Tub Cassandra and Dre
Cassandra is trying to figure out what Jackie told Ika to make her pissed at Cassandra.
Cassandra says As long as she’s in the house Dre, Ika and Gary are not targets.
Dre – Neda is trying to convince them on how to get me out.
Cassadnra says their side is the underdogs Neda’s side are the “Cool kids”
CAssandra – should I put Jackie on Blast
Dre says Jackie will go cry and make it look like Cassandra is the bully.
CAss – Neda doesn’t have Ika’s back.. Bruno, Sindy, Kevin and Dillon will all go after Ika I won’t.

11:00pm Karen and Ika Bathroom
Karen – Dillon is already targeting me. Ika – why?! I haven’t heard that. Karen – who else are they going after?! Dillon and Em think they’re so safe. Cass is convinced she has the votes. Ika – she is going home. I trust you, Gary, Demetres. Everyone is lying in this house. Karen says Neda is in an alliance with Dillon, Emily, Kevin, Bruno and Sindy. Ika agrees says they are always together. I was trying to not believe it because we had our thing. Karen – and she’s safe for another 2 weeks. We we just doing what Neda wants, throwing out Cass. Or is Cass just too much of a wild card.

11:15pm CAssandra and Gary
GAry tells Cassandra she needs to work on Demetres.
CAssandra – I’ll be really upset if I leave
Gary – you’re not
Cassandra says Neda has been a huge bitch
Gary has noticed..

11:22pm HOH Neda and Sindy
Neda tells her they are going to make sure Dillon and Emily are on board with putting Dre and William up with GAry being a Backdoor plan. Neda – Emily said she likes you, so I think its good. I think Dillon and Emily will be okay with Ika and Demetres for a while too. Neda – Cass has a whole other day to cause a lot of damage. Karen just eats it up. So does Dre and William. I don’t think anyone sees the 6 of us. Cindy – no. Neda – we should just no let them know we know about the 5. Cindy – I’m feeling a bit of a vibe from Dre today. They talk about how it could be a double eviction coming up.

Neda – if Gary is here he is going to go after one of us. Cindy – I know but I feel like if you weren’t trying and you were like constantly throwing it in their face .. like whatever I’m safe. I dare you! Neda – I should. Cindy – I feel like if you did that, then they would go after you but right now its not constantly reminded in peoples heads. Neda – karen brings it up every 2 seconds. Cindy – I think that because you’ve won HOH, people are forgetting that you have a different power. You haven’t been spoiled or ungrateful. You know that if Gary had won that he would have been like whatever! What are you going to do! He would taunt people with it. Imagine if Cass or Gary had that power… and she thinks I’m on a high horse. Neda – once Emily leaves I can lead Dillon to do blow up after blow up after blow up..

11:32pm Ika and Demetres poolside
Ika – she does have those 4 votes..
Demetres – don’t do this to me right now
Ika – no no no we’re not keeping her
Ika says Karen, Dre, CAssandra, Gary and William all hate Neda.
IKa thought that everyone was bullshiting Cassandra
Demetres says it doesn’t make sense for them to keep Cassandra but it makes sense for Dre, Will, Gary and Karen.
Ika – Neda was so rude to her during that Veto comp
Ika – her (Neda) Ego is getting to her head she needs to slow the fuc** down 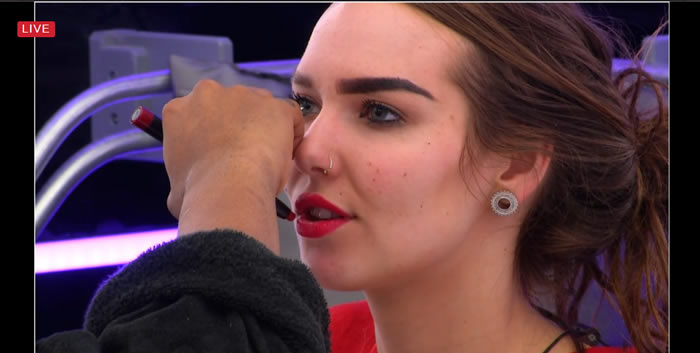 I am Gagging at the Will-Kevin conversation. I cant wait for that upload. My heart hurts after that one. ?

I’m waiting for the world to see the dillion and gary upload. That was BIZARRE. Gary coping feels and dillion loving it

Ika is playing a pretty good game and no one suspects her of playing both sides. Let’s see how long before they can figure things out.

those guys just sitting there going along with the group who are planning to pick them off, in a particular order is lol. its like they think if they don’t vote with the house they are going to be targeted, but they already are targeted, like next, next, next, bang bang bang.

maybe if they keep cassandra they have more numbers, especially if the others think they will pull in jackie. they would never be able to pull in cass if she stayed, they would have a number in jackie, making it so much easier for it to be karen, gary, dre, and william up on the block and out the door one after the other.

at this point i don’t have anyone i dislike enough that i want them gone so they don’t win anything, so that’s a change from other years. i still think gary should not be there, so i guess he’s the closest i have to not wanting to see him win anything at the end. right now i wouldnt mind overly if any of these HGs get to the end.

Wow. Emily is actually the prettiest person in the house now that I’ve gotten a good look at her.

I don’t understand a few things about this week.
Dre and William are sketched by Jackie because she is talking to everyone all over the house. Someone on the block is talking to everyone…. isn’t that called campaigning? Obviously two people that haven’t been on the block yet don’t understand that campaigning means talking to everyone in an attempt to gain / keep votes.
Cassandra’s campaign appears to be playing the victim and getting people to hate the people she hates. Beyond saying she’ll campaign for any of them if she stays, she has nothing to offer. Let’s say two of the ones that would keep her are on the block together… which does she campaign for? And who does she campaign to? The same people she’s just spent a day and a half disparaging? Gee, say hi to Dallas. I’m trying to think of a good argument to keeping her… but at this point even her campaigning strength is no longer viable.

sunny dee
Reply to  another name

she’s always done that, basically offering nothing, and get others to target each other. still can’t believe she thought a guy on the block should go target a guy not on the block who had a vote, (demetres told to fake a fight with dillon) a while back. it never made any sense

Who the heck would have thought Ika would be the voice of reason?? (That’s in regards to Neda having a big head)
Now keep Cass!

Can someone explain why Neda is against gary to me, where did the fallout happen.

I think she’s trying to get rid of all the popular players.