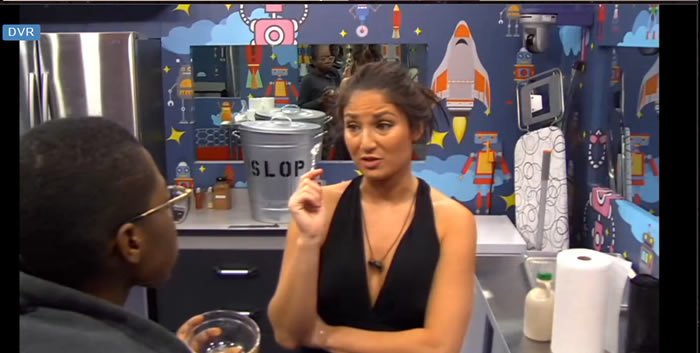 10:30am Storage Room Dre and Cassandra
Cass – right now I want to figure out if Gary is lying or not.
CAss explains that Gary told her they have the votes. She didn’t think so because they still needed Ika and Demetres. Gary told her he had Dre, Ika and Demetres in a room and they all confirmed to vote out JAckie.
CAssandra says Ika told her she doesn’t have the votes. CAssandra told Ika she has Dre, Karen, Gary and William. Ika told her to bring Gary over to confirm acting like she doesn’t have Gary’s vote.
CAssandra wants Dre to confirm with Ika if asked that her and William are voting to keep her because she’s feeling that Ika is thinking they are being shady with the vote.
CAsandra – we can have the votes as long as we can solidify Ika and Demetres.. we can’t have both of them on the edge.
Cassandra is confident she has karen.
Dre – I told William I don’t trust Jackie.. I don’t
CAss – he would vote me to stay
Dre – his otehr friend is on the block
Casssandra – Yesterday we thought I was dead gone I think we can get the votes.
Dre – I think so to
Cassandra says every chance Neda gets she takes a jab at her.
CAss – I was talking about zsa zsa gabor and she was like aren’t you always a b1tch.
Cass – Everytime I walk into a room she does something.. I just gotta keep my cool. 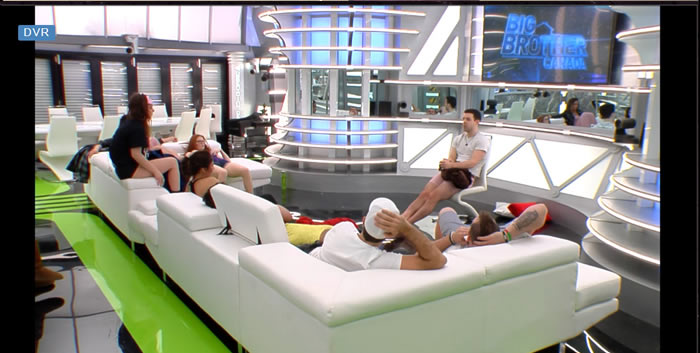 11:14am Bible study with Kevin

Cassandra – we have the votes
Ika – I just don’t want people to say we do and we don’t
Cassandra is worried about how close demetres and Bruno are.
Cass – he has to remember who has been loyal to him..
Cassandra reminds her that Kevin and Bruno were trying to get Demetres out week and they were only “Buddy Buddy with him” last week because he was HOH.
Ika wonders why when she brought up the wise guys alliance to Neda she didn’t care
Cass points out it’s because Neda is part of it with Sindy. Once Casasndra goes Dre, Ika and Demetres will be the targets.
Cassandra says Sindy is playing a good game “She’s under the radar”
Cassadnra brings up the season 3 3 person alliance that Kevin told her about.
Again Cassandra says if she stays she’ll always be the first one to go out of their group “it’s dumb to get rid of me”
CAssandra – voting with them is just being pussies..
Ika – if we have the votes I’ll keep you
CAssandra says they do have the votes everyone is just sketchy about Demetres and Ika.
Ika says William thinks that Neda made up the story about CAssandra throwing him under the bus.

3:40pm Dre, Gary and Ika
Talking about Cassandra’s fate. (they’re voting Cassandra out)
Ika – she’s leaving I don’t want her talking to me
Dre warns Ika about Jackie she lies and she doesn’t look like she can lie.
Ika doesn’t want Cassandra in the house.
Ika – Black people don’t get anxiety
Ika says Cassandra is a shit player, Gary and Dre are giving her too much credit.

They get a task if they can clean the house to Big Brother standards they get hot water and the “HAves” get to eat regular food again. They have 1 hour.

Bruno says Dree, Gary, Karen and Dillon all on slop would be a “Terror week”
Demetres – we got to do that.. it would be good for entertainment and good for our game

i would trust ika and neda over cass.plus neda should be able play pov or hoh because her safey

Go home cassandra. You are a horrible Canadian.

I just hope that Ika, Gary and Dre are next to go

fuck no dre for the win

B
Reply to  Tim

Racism at its finest

Of course. the only black folks and you want them gone.

I hate how Neda said in the diary room that Emily and Dillon are like a low brand, no name version of her and Jon. Arrogant much?

Cassandra is messing too much with the game of others …I would rather she went.I find she has not learned any thing since last year and is just making the same mistakes.

Isn’t today … Podcast day?
Last weeks was great.
Is there a link?

Thanks! glad you liked it. Recorded Sunday night Usually up by MOnday morning.

Thx .. got it bookmarked

Literally obsessed with the Ika-Dem powerhouse force that they’re serving the BB house this season so THANKS for the uploads of all their convos even when its not game related. My ideal final 5 would be them, french connection & Gary. They give the feeds SO much entertainment.

Me too!! I love the Ika & Demetres conversations by the pool this week! They crack me up. I think it’s fun how they sort of counter balance each other’s temperament. Demetres is usually level headed and stays positive and upbeat most of the time – even on slop. He mellows Ika and she makes him review events occurring in the house from a different perspective. I really like them together and find them entertaining. I hope they go far in the game.

I’m sorry but this is the worse big brother yet. They are all boring and I can’t stand watching Neda anymore, wasn’t she the one who said she can’t stand fake people but she is definitely the fakest of them all. I loved watching Cassandra last year and will not be able to continue watching with such boring people left in the house. Out of all the people who apply to be on this show I can’t believe this was the best of the crop, I think it’s time for them to get some talented people in production. Done for this year once Cassandra gets voted out.

The Six
Reply to  Denise

These Cass fans are hardcore losers. This is why I stopped reading comment sections regarding big brother. Last year it was Mitch, this year its Cass.