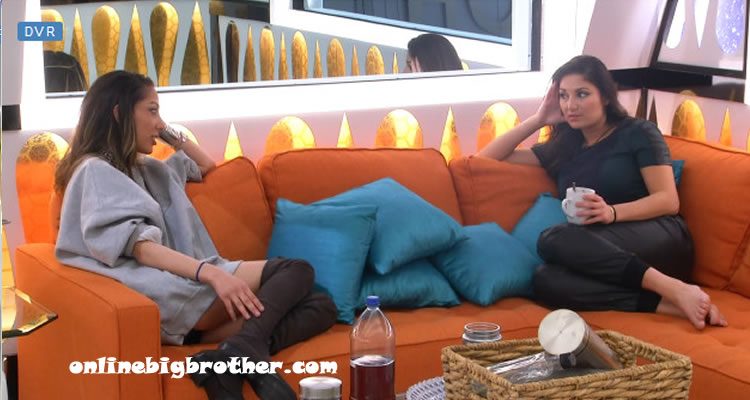 Nominations are happening soon. OFFICAL **Neda says she will be putting up Cassandra and Jackie. Primary target is Cassandra secondary if POV is played on Casandra is said to be Gary. Eviction is a world away so none of this is in stone. (The pawn always seems to go home)
Tomorrow the Power of Veto is played**

10:00am Neda and Kevin
Neda tells Kevin they have their 5 votes and EMily and Dillon enough to evict Cassandra.
She’s not worried about Cassandra coming back pre jury they’ll just get her out again.
Kevin wonders who leaves if CAsandra wins Veto, JAckie? Neda says it’s pointless they should get rid of Gary. (Ohh shit)

William comes in and wrestles with Kevin.

Dillon’s got all the moves

11:13am Ika and Cassandra
Ika – I feel like EMily and Dillon feel safe
Cassandra – they are safe they are not going up
IKa says the other people that are in trouble would be french connection, Jackie and Cassandra.
Ika says Neda knows what she’s doing and when she says she doesn’t she’s lying.

11:18am Ika and William Storage room
Ika says it might be Cassandra and Jackie. If that’s the case they should get rid of Cassandra. William says Cassandra is like a shield for them.

12:45pm
Neda tells Ika that Cassandra threw everyone under the bus.

Cassandra and Ika bedroom.
Cassandra goes over her conversation with Neda. Says she only brought up Dillon and Emily as targets. Ika plays dumb says that Neda never gave her a solid answer of who is going up.

Ika calls Dillon and Emily “Dumb and Dumber” Adds that she;’s pissed that Neda is so close to them all of a sudden.
CAssandra- everyone is going into her room saying Dillon and Emily
Ika – I don’t want to go into her room..
Ika – Sindy is so F***G annoying she’s shady as hell
They agree Sindy doesn’t like Ika she’s jealous of Ika.
Cassandra – she (Sindy) has something against you.. don’t let your guard down.
Cassandra tells Ika that she doesn’t need Sindy she has CAassnadra “And I’m never going away from you”
Ika says Neda is pissing her off.
Cassandra – my favourtie Newbie is Dre
Ika agrees.
Cassandra – Jackie is trust worthy she’s loyal.
Ika says the problem with Neda is so many people respect her and will vote for her to final 2. 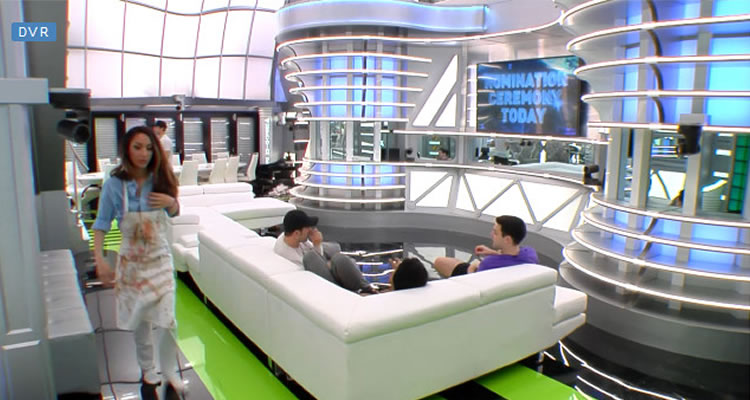 6:05pm jackie and Dre
Dre says that Cassandra threw all their names out to Neda.
Jackie – I feel so betrayed.
Jackie asks her to pull her away if she gets “heated”
Dre says Cassandra is the bigger threat.
Jackie points out that Cassandra didn’t even give Dallas a vote that proves how disloyal she is.
Dre – do you feel it’s newbie vs veteran war
JAckie – I don’t think it’s like that.. doesn’t feel like that.. 2 vets outta the door
Dre – they are going to turn on each other..

While this conversation happens Neda is downstairs with a collection of other houseguests. She says after her alliance was shattered Sabrina became a useless player and that is why they kept her around. Demetres pointed out that Sabrina won 20 grand. (Sabrina added so much freaking value to the feeds that season.)

6:52pm Kevin and Karen Storage room
Karen is complaining about the game and how manipulative people are. She’s talking about Dallas in particular. (If you watch the Kraken hour on youtube this is an example of 9 Kraken moment.)
Prior to this conversation Cassandra was in the storage room with Kevin saying she didn’t think Neda would put a Vet up. (She’s fishing for info)

Totally! The look on her face when in the HOH with Neda and sindy.. Haha it’s going to be a wild week

I am sorry that Cass has played so badly this year so early. I thoroughly enjoyed her last year, but see now that without Tim there to bring her back to reality and tell her to stop (which he did do several times last year) she totally exploded her game up. Now unfortunately, she is going to pay the price of her deviousness. I have felt really bad since the first episode about the way she targeted Bruno, and every chance she got, threw him under the bus. I am impressed about the way he kept his cool with her. He knew she was doing it, and kept it pretty much to himself. He might not have known however, how much she was doing it, so when Neda gives he speech while nominating Cass, and blows Cass’s game up, I won’t feel sorry for her at all. Cass won’t have any credibility at all from this point on, and no one will believe a word coming from her mouth, and lets face it, her whole game is manipulation. I am afraid she is gone this week, unless something really weird happens.

Thanks guys so much for making my exceptionally boring Friday manageable. Really appreciate all the effort you put into keeping us up to date on what is actually happening in the house.
Cass really needs another Tim in the house. Someone to tell her to calm down and pick her moments, she really just can’t stop.
I was a Kevin fan, but he clearly feels way too safe. Someone needs to shake things up and make a few of these players feel some pressure.
I was also really looking forward to watching Neda play. She really was a background mastermind during her first season, but there was no way she was going to be able to play the same game coming back in. Now with this stupid twist she doesn’t have to do anything. So frustrating. They should have made it a weekly vote. Canada can vote to give one player immunity each week until jury, but each player can only win safety once. That way the newbies had an actual chance to win some protection.

why does the OBB watermark need to be in the middle of the screen obstructing every ones faces?
Can you stick it to the bottom??

I can fix that

No Problem. new batch of videos will be optimized 🙂

Neda would be better off getting blabber mouth, back stabbing Ika out instead of Cas.

i’m not sure about Ika, but i am pretty sure that getting Cass out seems like a waste of an HOH. the only thing is, neda is managing to be working with just about everyone thinking they are her special someones. even her saying well then Gary can go if cass wins POV is lame. (tho i don’t disagree, i do NOT endorse having any actual winners come back for a 2nd chance. and Gary won in his season, he should have been first to go out. the only thing is he isn’t stirring up dramatics, so he doesn’t have any real target on his back.

i for one, as a female, am mind boggled as to why any of them are not concentrating efforts on getting bruno out, after the way he was in his season. maybe he learned a lesson (or got an earful when he got out of the house for his hatred of women, which obviously backfired on him lol). but the idea he would closely align or final 3 with any woman in the house has to cross their mind that he. will never do that

Hope Cass wins her way back in the house gets final 2, and Neda first jury. I never liked Neda.

I totally like Neda as a gamer and felt she should’ve won instead of Jon but to give her safety until jury is bullshit! All the other returnees have to fight and play the game with caution but Neda can make big moves and don’t have to worry about the backlash because she’s safe til Jury. Also the fact that she can also be HOH too is extra unfair. I feel if she’s so great at playing the game then she shouldn’t have an advantage because without the advantage she would be playing the game differently. If she wins the game I’m not giving her any credit! Bad move on production putting this in the game when they had to know Canada was going to give it to a returnee and a newbie never had a chance.

calm down, jury starts after 4 people get evicted. after this week 3 people will be gone so Neda gets one more week of safety.

What they should have done is have Canada vote safety for a newbie of their choice until jury – that would have been more fair! Make all the vets battle it out on the same playing field!

it will forever be a hollow victory for Neda

relax, Neda didn’t safety the first week, won hoh the 3rd week so she would have been safe this week, and jury begins after 4th person is eliminated…so it’s not like 2 weeks of safety will make her win (if she wins) less amazing! besides trust and believe that the minute her safety is up all the vets will be gunning to take her out!

oh neda will say she was the mastermind again this year again glad dem said back to her but sabrina won 25 grand what did neda win that year ..oh she went with jon and coat tailed his publicity. does dem forget cass saved him first eviction.

OMG
Reply to  To the Curb

Yes Cass saved him because she made him do something shady to get into it with Dillon. There is not one good thing Cass does for anyone. Everything that has her name on it HURTS other players. I have absolutely no sympathy for her, and hope the door doesn’t hit her on the ass on the way out. She is one nasty-assed person who finally is going to get what she deserves. Even at the finale last year she tried to take all the attention away from the final 2.

To the curb
Reply to  OMG

what was up dallas tattoo blacked out?

Frodo………it was the word F–K. It was blacked out last season as well I think

I always thought that Kevin was a waste of space, but this Kevin/William thing is making me so happy!