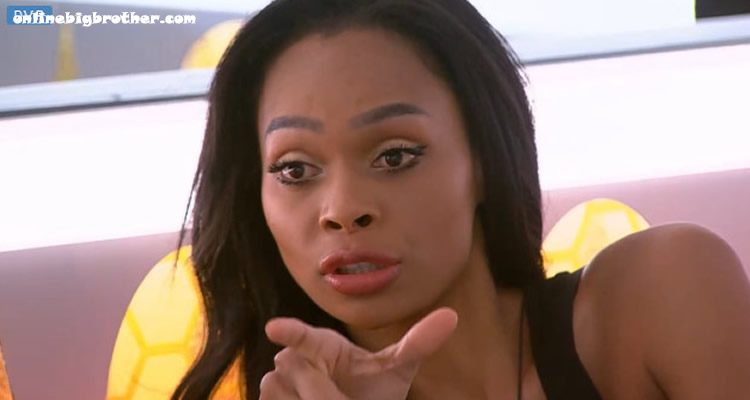 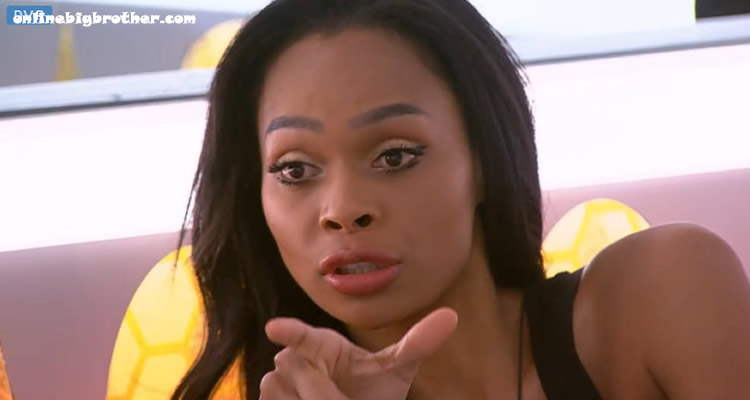 Ika and Sindy in the head of household

Sindy is saying that Cassandra is throwing them all under the bus. Sindy says she’s the type of person that “sits” here and tries to ‘Understand”.

Sindy says you can see the tension with Ika
Ika “I’m sorry Emily and Dillon are coming after me and you’re running around playing best friends with them, that doesn’t make me feel very good. I’m sorry. It really doesn’t” (damn)
Ika explains how these people are coming after her and someone in her alliance is HOH and “Not only are they off the block you’re running around making best friends and deals with them”
Sindy – yeah
Ika – I’m sorry my tones a bit off to your liking that’s just how I feel
Sindy – NO.. I get it
Ika – no you don’t, you’re just being nice when did you become the voice of reason (ika is slaying)
Sindy – I get both perspectives you know what I mean

Ika – Cassandra never threw out my name or mine
Ika – Cassandra is the biggest liar and manipulator in this house. All the words that end is ters (wtf) that’s what she is.. She took all the words outta the dictionary”
Ika – the people that threw out our names are downstairs prancing around and their friends.. They’re cool.. Why weren’t one of those people on the block with her
Ika – because you’re making friends with them downstairs
Sindy – do you not trust Bruno, Neda Kevin with they won HOH.. like they wanted to go after Cassandra as well.. And Karen”
Sindy – Like LIke…. when I was in the blue room.. Like..

Neda talking about Ika being pissed that Emily and Dillon are not on the block. Neda says she thought it was their plan to take out CAssandra.
Neda – you guys I can’t work with that emotional of a fuc***g player
Kevin – she’s crazy she’s a fire cracker (ease down kev)

Bruno thought that was the plan mtake Casasndra out, “That’s crazy”
Neda – we’ve been talking about htat all along..
Neda suspects they Ika is worried that they are working with Dillon and EMily and She’s not included. (you are)
Ika – She’s going to flip on us so f****g fast guys
Neda – you guys are the only ones I f****g trust…
Kevin and Bruno confirm they will vote out Cassandra
Neda says she has to be with Ika all day long to stop her from flipping shit.

10:25 Cassandra/Dre Have Have nots cam 3-4
Cassandra names off the players that she feels will not flip: Neda, Dillon, Emily, Bruno, Kevin, William, Sindy
Dre says that Demetres has been spending a lot of time with Sindy and Ika
Cassandra says she thought she was close to Demetres he told her Ika and her were his 1 and 2.
Cassandra – I don’t want to even see these phony bitches out there.
Cassandra says Bruno is sketcher than Kevin. Confirms that Bruno lies thru his teeth mentions last night in the Hot Tub where Brubno lied to her.
Dre presses if Kevin has lied to her.
Cassandra says she called Kevin out, she knows she’s not getting Kevin’s vote. Cassandra believes that Kevin and Bruno are ride or dies. She also says Brno and Kevin have a season 3 alliance with Sindy and are in an alliance with Neda, Dillon and Emily.
Dre asks about Neda’s involvement, “Why Dillon and Emily.. what the fuck”
Cassandra complains she has to share the have nots room with Brubo “I’m going to get diseased”

11:13pm CAssandra and Ika/Dre
Ika – I’m over all these people
Ika asks “You sure you have Karen”
CAssandra – Karen…. yeah voer Jackie..
They count the votes… Ika, Dre, William, Gary,Karen, Demetres

12:10am Neda and Sindy
Neda wants Sindy to explain to her what is happening with Ika
Sindy thinks that Ika and Neda should talk
Neda says before Neda won hoh they were all in agreeance they should put up Cassandra.
Neda says Ika is being more selfish from a “Goups point of view”
Sindy – there’s a bit of miscommunication
Neda says she can’t plya the game with this miscommunication. “I understand she only made it to week 4 but you can’t play this game flipping like this on your alliance member.. it’s not OK to make someone feel like shit”
Neda – I can’t handle it.. she hasn’t talked to me all day long she’s had that look on her face all day long
Neda says Ika is draining and she shouldn’t be drained with people in her alliance all day long. Neda says she wishes this was allstars and she wishes Jon was playing. She wants Logical players so she doesn’t become drained.
Sinday says Neda’s nominations were good and she supports them.
Neda says Cassandra was after more of their people than Emily and Dillon were.
Neda says she keeps seeing Cassandra and Ika together on teh couch being best friends.
Sinday says Jackie is already spilling all of Cassandra’s secret.

Demetres and Ika
Demetres says people have backed down in confrontations with him ever since he’s started working out. 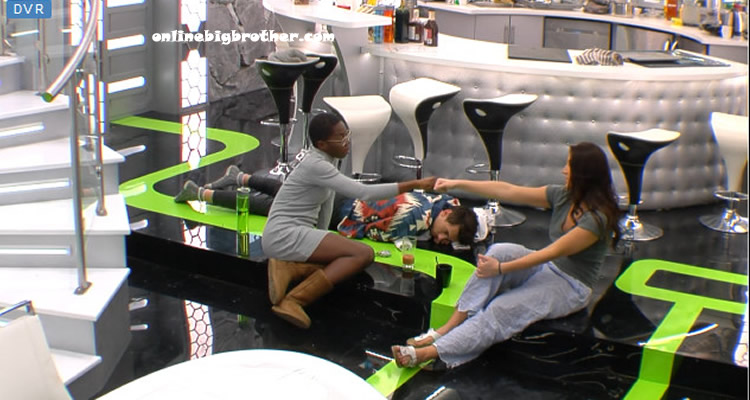 1:00am French connection and Casandra
Cassandra says she was more entertaining than Neda on her season.
Dre says she was serious that she’ll put up Kevin and Bruno if she wins HOH.
They fist bump. Cassandra tells her she’ll stand by them.

1:16pm Demetres and Ika
Demetres says that Cassandra staying in the game is good for them.

Late night Gary, Ika and Demetres
Ika says Sabrina wasn’t any worse than the rest of the people in BBCAN3
Gary joins them.
Gary says William is someone he would want to build a relationship with outside the house. Gary adds that him and Kevin are flirting.
Ika – boys are messy
Gary says Kevin is “100% gay and just doesn’t know it yet”
Ika – he knows he’s gay
Gary – he doesn’t know yet
Gary – it’s weird.. he always brings..(Can’t hear him).. . that’s his last thing you hold on to
Ika says she knew.

They head to bed. Gary and Ika meat up in the kitchen. Gary tells her they have to try and save Cassandra. there’s too many people on Neda’s side. They have to draw the line.
Gary now says they should get rid of CAss.
Ika – she’s a liability
Gary – the whole house is on the same page why fight it.
Gary says if someone is going easy let them go.

Ika – I don’t mind drawing the line for you or for Dre, but not for her
Gary – ok, we don’t need to draw the line for her (Cass)
Gary – so we let her go.. I’ll grieve her.. let her go
Ika – yeah
Gary – I just know she’ll never come after me.. me personally .. it sucks for my personal game
Gary – she payed this game too hard.. I’m over this Neda.
Gary – we need to get out Bruno first

i don’t get why ika is acting this way either, pretty sure i read in the previous recaps that she was all the way on board with cassandra being put up. if she wasnt i would have been reading her throwing up dillon and emily again, (which makes more sense anyway, since cassandra is a sneaky train wreck but she is definitely the sneaky train wreck on the vets side, just as dallas was. not too sure what the focus by vets to get vets out and not newbies, that has to be the shortest lived vet alliance ever.

all of the videos to that look the most interesting did not load right, so disappointed, will have to come back later 🙁
i like to see their tone and so on when they talk, like is ika serious about being surprised about cass being up or is she just playing that game she does

Takes a long time for these videos to upload. 🙁

I’m gutted with the deterioration of Neda and Ika. Ika doesn’t realize how much damage has been done between them. The fact that Neda confided in Bruno and Kevin is not good. Ika really is sinking her own ship but hopefully she she can repair things with Neda, but I don’t see how the core 6 will be whole again.

I think Ika doesn’t do alliance well. She does leader, not partner.
The first sign of Ika not getting her way, and she spends a couple days sabotaging herself.
Sure, she was given the slop excuse as a have not… but now it’s just sloppy.
If I’m trying to be in Ika’s brain, and correct past mistakes, I’m thinking she needs a security blanket because she got back stabbed the first time. Okay. That makes sense.
Problem: she’s a coin toss every day, or multiple times a day. She’s making it clear she will flip eventually. She’s being as sloppy as Cassandra’s overplaying in week one and two. Someone prep the letter shredder, we’re going to be needing it soon.

Cass has been doing nothing wrong. Neda and her crew are playing just as hard. Making friends and enemies. At the end of the day it comes down to your side winning power. That’s the difference. Gary is probably most at fault. He’s been sitting on the sidelines and paying the price.