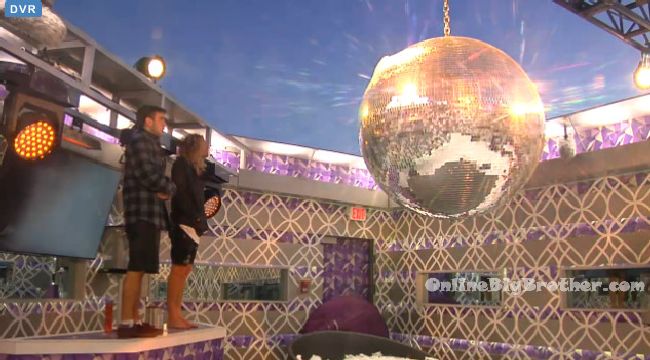 9:35am – 10am Nick and Tim stayed up until the sunrise and asked big brother if they completed their task. Big Brother told them they would get back to them. Tim waited another half hour and asked again. Big Brother told him again they would get back to them. Tim said he was going to bed because as far as he was concerned they stayed up all night. They then went to bed and got an hour of sleep before big brother woke them all up. Tim gets into the pool. I am so sensitive today. I feel like crying. I actually feel like I’ve been in a concentration camp. I know that’s insensitive to say, I shouldn’t say that. I just feel like I could snap at any moment. Tim says I am just a little fragile today. Nikki says I’ll look after you. Tim talks about how the tasks yesterday got meaner and meaner. Tim says I’m sick of being treated like a group of special needs mentally ill patients.

Hot Tub room – Tim tells Phil you know what I think Tim is doing. I think he is going to vote with us, he’s just collecting information like he did with the koalas. He’s leading Maddy and Ramsey on so that they’ll vote the other way. Phil says its smart but there are a lot of flaws.

10:25am Ramsey tells Mitch that he knows Tim doesn’t like Joels voice in the morning. I’ll pump Joel up, get him to start telling me a story and then ask him to finish the story outside (by Tim).

10:50am – 11am Big Brother blocks the feeds. Big Brother leaks a shot of the high roller room showing the house guests bed sheets. 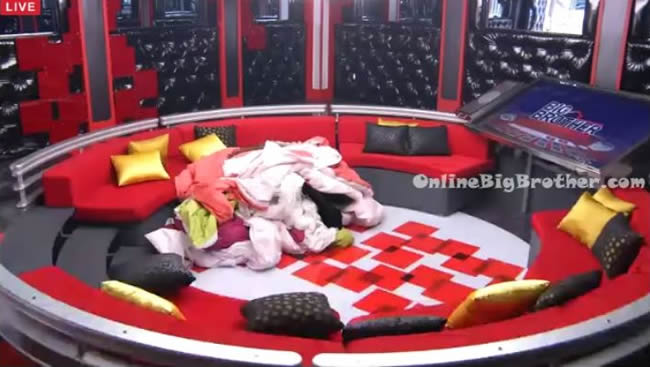 In the backyard – Maddy tells Ramsey that Kelsey follows Jared around. Its pathetic. Ramsey says whatever she needs to do to get through this.

11:25am Jared and Kelsey noticed the high roller room is open. Jared says I think we should keep this nest a secret. Kelsey says I think they’ll come looking for us. You’re a hot commodity.

Under the stairs – Kelsey tells Raul that if the four of us just stay strong, we’re good. If he (Tim) votes to keep Mitch .. what is he going to work with Maddy and Ramsey?

12pm – 12:10pm In the high roller room – Ramsey says if I win HOH and don’t put you up sh*t is really going to hit the fan. Ramsey tells Jared he wants to sit next to him in the end. I’m telling you next week we’ll be alone and I’ll be telling you I told you Mitch would be the one to go. Ramsey explains that its good if he votes to keep Mitch even though he is going to make it look like we’re not working together.

12:35pm Nikki sends Mitch some good energy. After Nikki tells him to not be on his own. When he is he sinks. Mitch says he’ll be fine. She tells him she loves him. 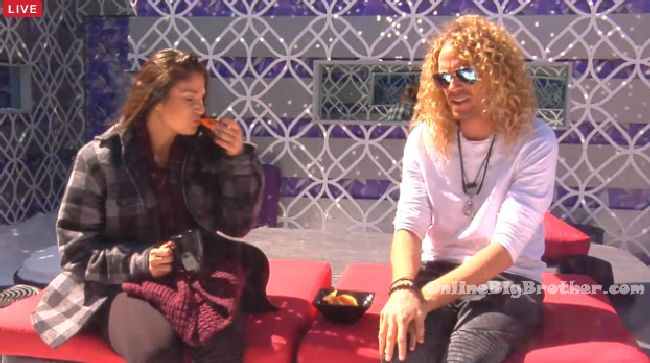 12:40pm – 12:55pm Hot Tub room – Cassandra says I think we might be the John and Neda of the season. Tim says I was thinking that too. Cass says Maddy and Ramsey need to go next week. They’re coming after me. What is your reasoning for keeping Maddy. She’s an emotional player. Cass says that Raul needs to go before Kelsey. Jared and Kelsey will take us to the end. Raul won’t. Joel and the brothers will take us to the end. Maddy and Ramsey will not. We need to keep people that will take us to the end. Tim agrees. We’re doing good. Tim says I like that nobody in here likes you. Cass asks why? Tim says because I want to be at the end and say that I was the only one that loved and respected you. People think you’re annoying and not smart. I see that you are. Tim says we’ve been friends through thick and thin. Its not an alliance. Its a business contract. The next time you put tanner on I’ll help you. Cass asks are you going to put it on me? Tim says no, I’ll tell you to wash your hands after. You look like an idiot. Maddy joins them.

Maddy get over yourself…jared wants kelsey and not you. Enough said.

Why is Cassandra mad at Tim now?

she seems to say how she is ignoring tim and doesn’t want to look at him every day, yet she is hanging out with him an hour later. Seems to just be nonsense

Perception is everything. In making the house guests think she isn’t as tied to Tim as she is, Cassandra is attempting to make the two look less like they are a strong duo in the house. Yes it’s foolish to say you want no contact and then hang out with him within the hour, but thus far the house has bought more of what she says than observing what she does.

Cass, Jared and Kelsey will not take you to the end.

Tim and his Kenny G hair makes me want to vomit! I seriously cannot stand these people. There’s a special place in hell for Cassandra and Tim!

Go outside and get some fresh air, dude…

And like clock work, Ramsey is kissing up to the side he is voting against.
He tells Tim he’s playing with integrity (ask Loveita and Dallas about the measure of his word). He tells Jared he’s still with him, he’s just voting to keep Mitch to divert suspicion.
How exactly are people still buying this?
At some point somebody is going to have to say, “hey Ramsey, put up or shut up. Can’t be with me if your history shows you’ll work against me.”

Ramsey would make more friends if he voted with the majority, it isn’t a ‘diversion’ if he votes for Mitch to stay, it’s a signal that he is working against everyone else. I assume Maddy is the one telling him what a good idea it is to do this? ok, lol

Cassandra, you and Tim are NOT the Jon and Neda of the house. please just stop that. No one in the house is like them, not the ones left in the house that is. just like jared is not a power player, being on the block twice, HOH once and one pov is not a comp beast i don’t think. i don’t think anyone has anything to worry about if they got to the end with him, other than people who hung out with him more likely to vote for him, as opposed to whoever the best player is.

feel bad for Joel right now, seems a bit lost. Good for the brothers who do always seem to be there for him.

And the other thing Cass was serious (on after dark) saying that she and kelsey were the ‘only’ ones in the house who were ‘never’ catty towards others girls, but ‘all’ the others were and are a catty group.

OK sure, yup, whatever you say.

I bet Joel would get on the Oklahoma Sooners NCAA Basketball Team…judging by his pool basketball talents!
WTF isnt he trying to save himself?