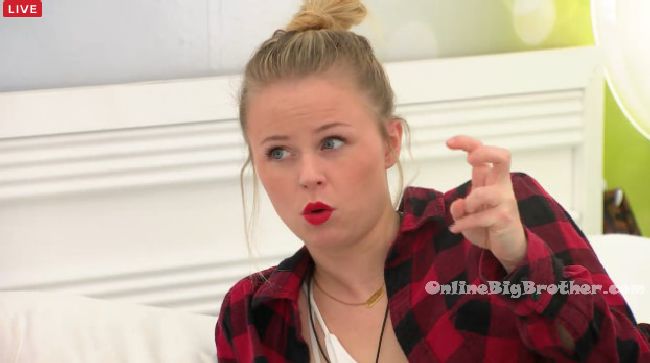 1pm – 2:15pm In the bedroom – Mitch tells Maddy to be careful with them. They play people to get information. Be careful what you say. Like want information you give out. Maddy says Jared and Kelsey approached me and Ramsey saying that they wanted to work with us. And that we’re to still pretend we’re going after each other. If you really wanted to keep this rivalry why would we vote with you. Maddy says F**k no am I doing a final four with you f**k heads. Mitch says that’s something that could be used to tell the brothers. I wouldn’t be surprised if they were doing the same thing with the brothers. They’re creating a false sense of security. Why do the brothers see so secure? They’re probably getting the same deal. The brothers just need a reality check! Maddy says f**k.. once they’re on the block they’ll get their reality check. Mitch says if we can use that to convert the brothers… They’re (Jared/Kelsey) trying to set themselves up for when you/Ramsey or the brothers win HOH so they’re in with you. If I’m not here, work with Tim. I think he would want to work with you guys. He’s not with them. He’s his own player. He’s very smart. Actually to convince Tim that its not the safe decision, its to shake things up. My argument to him isn’t that I’ll keep him safe, its that its going to be a sh*t show. Maddy says that Joel will do whatever anyone tells him to do. Mitch says Joel will go wherever the power is. The incentive to keep me, is to go after the threesome. Maddy says even if there was a double or a triple there is no doubt in my mind I would be putting them up. (Jared/Raul/Kelsey) Mitch says I want revenge so bad!

2:15pm – 2:45pm Nikki joins them and brings Mitch a bowl of soup. Nikki tells Mitch and Maddy that she’s going to work on Phil. She tells them that Cassandra thinks she’s so in with them. Mitch says the only way you be sure that it won’t be you that goes up next week if they win is if I am still here. Nikki says I would give anything to get HOH next week. Maddy says she wants it so bad too. Nikki says I so could have gotten the last one. I didn’t know we could use two hands. Maddy says I guess what’s best for me and Ramsey is that we keep our “relationship” with Jared and Kelsey to stay under the radar with them. Mitch tells them to keep it a secret about the final 4 deal until tomorrow night because that could be used to get the brothers. 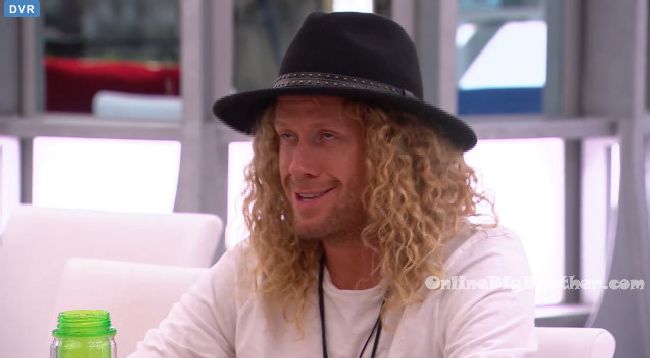 3:10pm In the havenot room – Maddy tells Ramsey she told Mitch about how Jared/Kelsey want to work her and Ramsey. She says that Mitch said if it comes down to the wire on Wednesday night we could use that to get the brothers on our side. Ramsey says he thinks Cassandra will vote to keep Mitch. Maddy says I f**king doubt it. Ramsey says right now his first thought is to not use the information. Maddy asks why are you doing this with Jared and Kelsey it doesn’t give us anything. Ramsey says it buys us another week.

4pm The house guests are lounging around. Raul is in the kitchen cooking “restaurant quality food”

5:15pm HOH room – Jared, Raul and Kelsey. Raul says I feel so bad for Mitch right now. Kelsey says I do too. Jared says he’s doing it to himself. I don’t understand how I had the power of veto and he didn’t talk to me once. He had two routes talk to me and convince me to save him or the house will save me. Kelsey says if the house saves him then we know they’re all after us. Raul says I okay if they f**k me over and send me home. I’ve gotten what I came here for.

6pm – 6:25pm In the bedroom – Tim and Cassandra are talking. Cassandra says lets start stealing things. Those guys can only eat maple syrup lets dump it all out. Tim says there’s only a day left, lets just hide it. Tim says lets just start messing with peoples minds. They plan to set up both Maddy and Nikki so each thinks the other took something of theirs. Tim says I’m happy to live like this the rest of the time .. away from the group.

6:40pm In the living room – Joel tells Nick and Rual that he has Nick, Jared, Kelsey, Cass and Tim’s votes. And in the event of a tie you (Raul) would break it. Joel says I’m not going to run around if I don’t need to. I know for a fact those two (Maddy & Ramsey) want me out but they don’t have the votes. Joel asks if Maddy likes Ramsey for real? Nick says no just like for me it wasn’t. Joel says for Ramsey I think he thinks its real. Nick says that girl couldn’t work quietly with someone even if she wanted to. 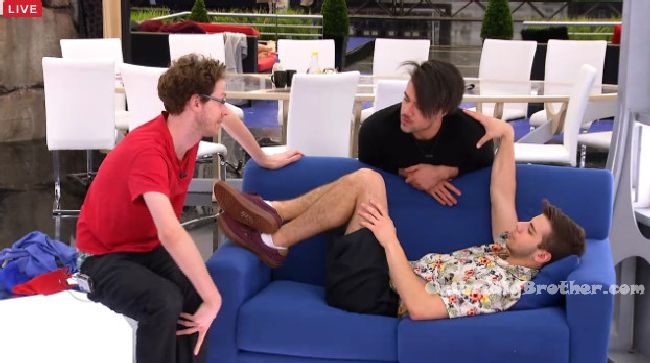 7pm The house is pretty quiet. All the house guests are bored /

I would like to see Jared, Tim, Mitch and Joel get together and do a final four. If any of the rest of the house guests win I won’t be happy, they are all idiots!

Hope you realize that Jared is apart of the said idiots.

Ya I know, I was just saying that would be my “best case scenario”. I like Jared when he’s away from Kelsey and Raul, they are like poison to his game. Raul hasn’t a clue what is going on….can’t believe he confronted Mitch like he did. Wish he’d kept his mouth shut and Mitch wouldn’t be in this position. And Kelsey had all this opportunity to go back in and play a better game and she’s blown it, Lovieta must be going crazy! If they were smart they would have utilized Mitch, still too early in the game to start taking out allies.

Phil is the Alex of this season. Thinks he’s way smarter than he is and is a complete douche bag

Thanks for the updates! Nikki saying she didn’t know she could use two hands but assumed one helps settle some debates online. I still feel if production wanted they should have disqualified Raul and given the brothers hoh…..if they wanted….

Stan7777
Reply to  Guy From Canada

Reality is that statement was production bull crap. I still have it taped. The entire explanation before the comp started was ONE hand period. Nikki was just a production mouth piece because a few folks like me called the cheat for what it was in social media.
Think it’s better if Mitch stays versus the production fix. Don’t think he has a chance in h e ll..

then it should be played by the rules

I wish Nick could play alone :( I like him. I can’t take his cocky bro.

Is it because I don’t watch the feeds?

I don’t mind Cass.
I mean she is better than 3 headed monster (Kelsey, Raul and Jared) , Ramsey and Maddy. (they all suck and hope none of those 5 win anything) lol

The secret veto won’t come out til Kelsey is on the block again. :P

What’s interesting unlike last year the majority of fans appear to dislike “production queen” Kelsey. Not going to use twists related to Canada’s vote. Production on this show is more unethical than a politician. Lower than a snakes belly.

Could someone explain to me how these 3 self-absorbed airheads are so threatening to anyone? There are more of the ‘other side’ and there’s three of them who do nothing but segregate themselves and talk about how superior they are. So what gives. They are not even doing anything that could be seen as ‘powerful’. Anyone, someone? Raoul and Kelsey have the same tactic – rubbing everyone’s hair/body to manipulate but it’s so transparent.

ISEEU…I think they know this, and if anyone but the “3 self-absorbed airheads” wins this next week, you might see a move against them. They have to do something now while they have the numbers.

Someone for the love of God take Jared out.

Kelsey has the worst habit with her hands they are always fidgeting with something. It’s probably a nervous habit of hers that she can’t help. Everytime i watch her its like nails on a chalkboard.

I love when the house plays games.

i can’t grasp that Cassandra has supporters/fans. like any. I. just. cant.

The answer to the heads is exactly what Mitch explained last night, you get in with them than your odds go up. Like someone said they need to get rid of them now while they have the numbers. Jared diffidently won’t make it to the end guys like that never do. Wish Raul would have been disqualified that would have been good tv.

Jared’s voice is so annoying! It sounds like his nose is stuffed up and he can only breathe through his mouth.