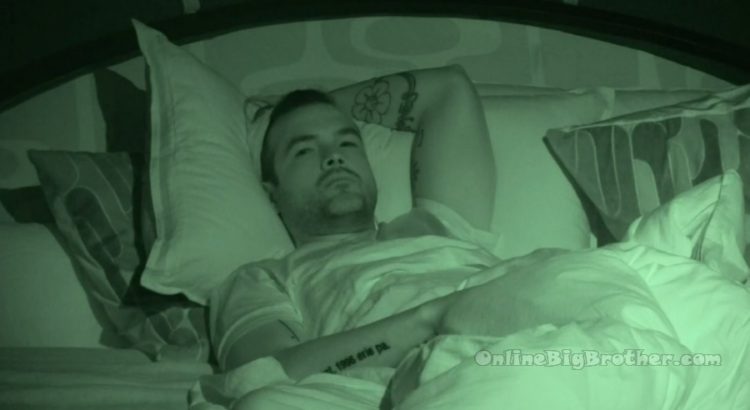 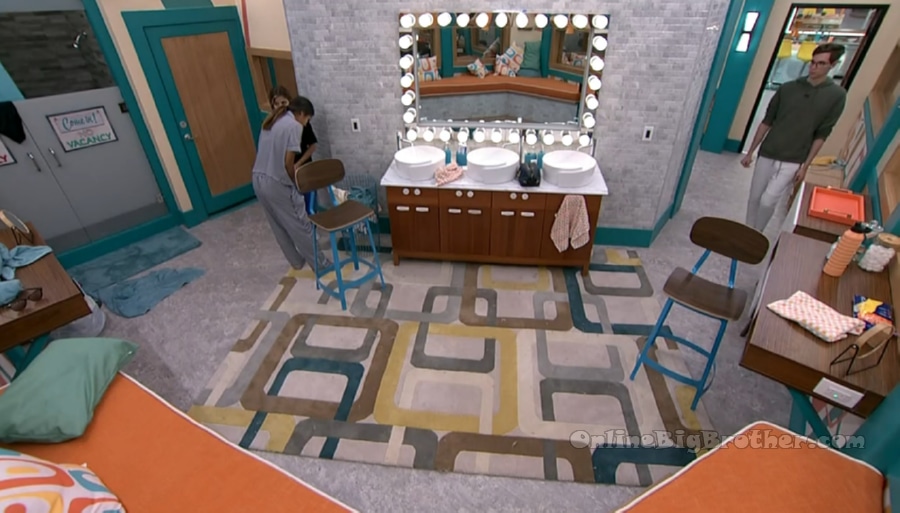 2:30 am Paloma and Ameerah
Paloma – final 6 alliance let me know if you are here for it girl. Kyle, Monte, POOCH, me, you, Alyssa. what do you think?
Ameerah – you already talked to these people
Paloma – we’re locked in like glue. I was trying to find you all day. You are the realest person in the house. I’ve been ride or die with your name all day. Talking with Daniel.
Paloma – I talked to all these players and they are locked in.
Ameerah – are they cool with me.
Ameerah turns on water to hide their whispering
Paloma – are you kidding me? Three girls, Three guys. 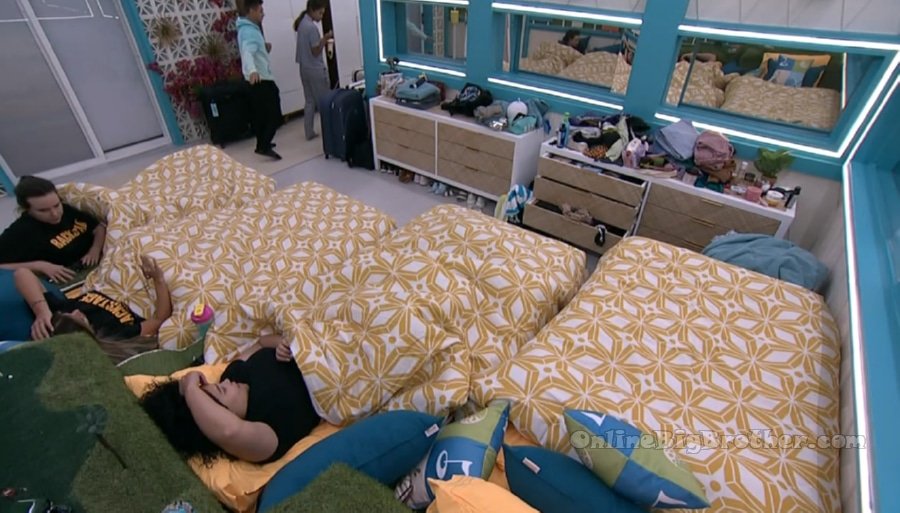 2:48 am Paloma, Brittany and Jasmine
Paloma tells them about getting caught whispering to Ameerah but Michael.
Brittany says Joe would be good to have on their side. Paloma agrees but wonders if Joe “Bro’s up” too much with the other guys.
Brittany says she caught Turner and POOCH talking in the storage room
Paloma – Really? Everyone is just talking too 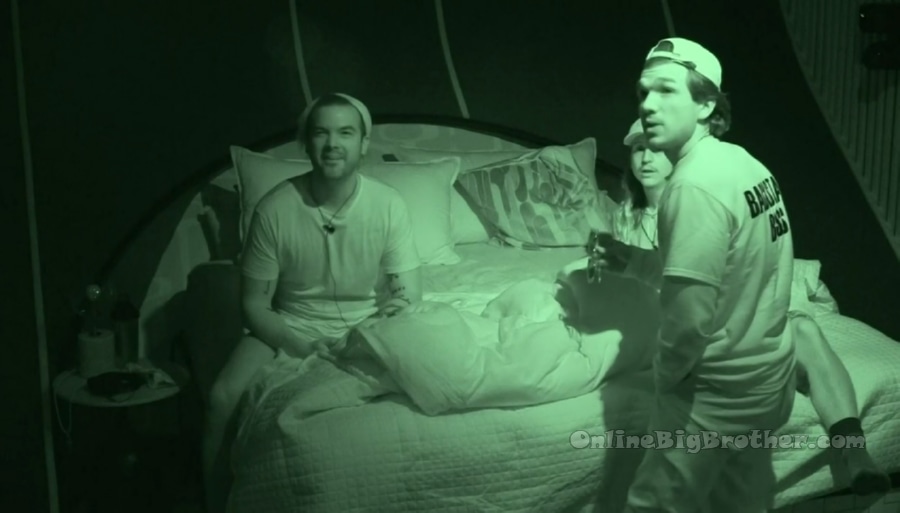 2:52 am POOCH, Turner and Daniel
talking about their final 3.
POOCH – you got to realize we’re not going to win win every HOH. There’s going to be a week or two
Turner – yeah a week or two. one of the girls?
Daniel – We got to start bonding with the two bros
They talk about Taylor being a ticking timebomb
POOCH doesn’t want to be the HOH when the group decides to evict Taylor.
Turner – there’s a solid chance we can get a fuc**ing rotation
POOCH – Even if we win 5 out of six HOH that still leaves one.. that one we want to make sure it’s a breeze. We want to make it like we are HOH
They agree Joe is someone they can use.
Turner said Brittany and Michael came to him and were pointing out how good the three of them get along. Turner suspects they are going to pitch an alliance to him. 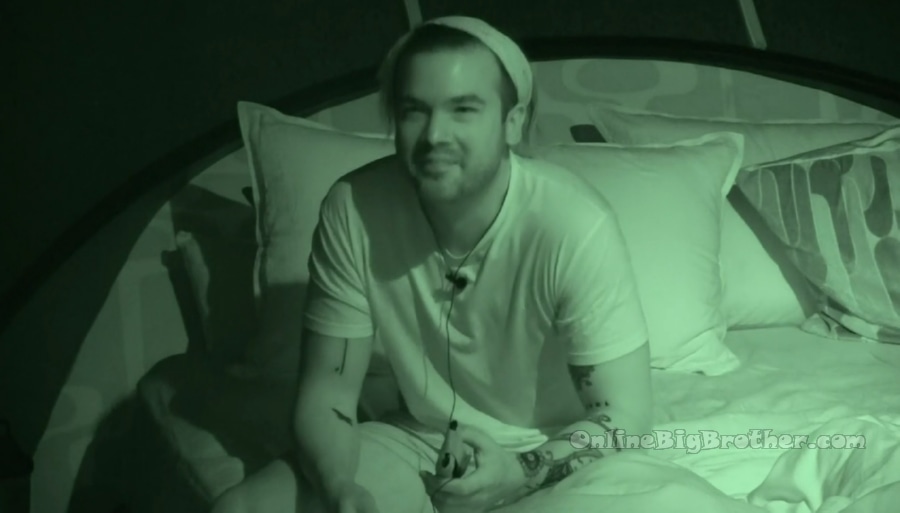 3:05 am Daniel alone in the HOH
Daniel – I do think it’s a good idea they bring in the two bro’s because they play bumper pool with them.
Daniel – I got to make sure they don’t go too big too soon. They can’t be pulling in a bunch of people yet. Those two .. I need to connect with those two other dudes.
D – POOCH knows this game pretty f***ing good he just gets a little over zealous and wants to have it all right now. I have to reel him in
D – if they are in this feux alliance the easiest way out might be Michael and Terrance on the block.
D – I like Terrance.. who cares dude you like everyone shutup 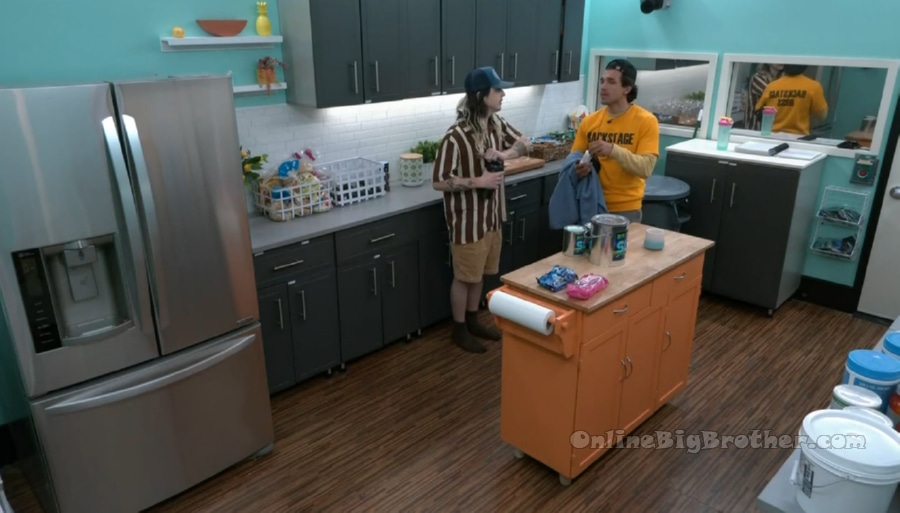 4:32 am POOCH and Turner
They’re talking about a final 2 and final 3 with Daniel.
POOCH says when they talk to Daniel with a plan it’ll be like they’re talking about it for the first time but actually it’ll be something the two of them have already discussed. (Final 2 inside a final 3)
Pooch – we decide how we will bring it to him
Turner – for sure final 2 is f***ing locked
POOCH mentions bringing in Joe “he’s a strong person he can win HOH”
Turner – he’s a sweetheart too
POOCH – he’s a good kid 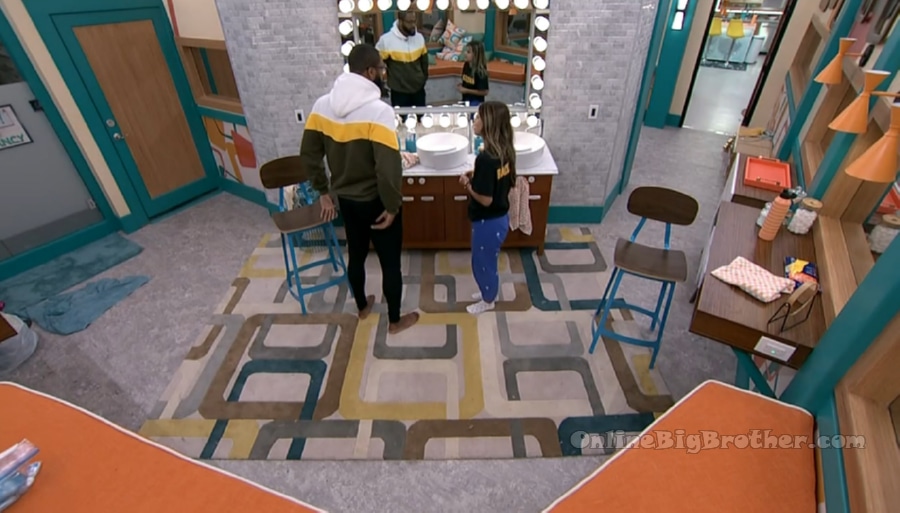 4:41 am Monte and Paloma
Paloma – do you have any names for our final 6?
Paloma – Is POOCH part of the final 6?
Monte – I don’t think we’ve talked to POOCH about official sh1t yet
Paloma – I’m very skeptical about him I just say him talking to Turner
Paloma – I talked to Ameerah and Alyssa we’re covered. Ameerah is locked in dude.
Monte – me and Kyle were talking a lot. He’s a bit of a wild card with POOCH.
Paloma — you think Kyle is a wild card?
Monte – no no no me and Kyle were saying is POOCH is the wild card
Paloma – I feel the same way. No one told him about the alliance?
Monte – we have a conversation with the four of us remember. Me, you, POOCH and Alyssa?
Paloma – so the conversation was already made so he knows it is brewing. MAN
They talk about JOE being in the six. Paloma comments that everyone loves Joe but he “wears his emotions on his heart”. 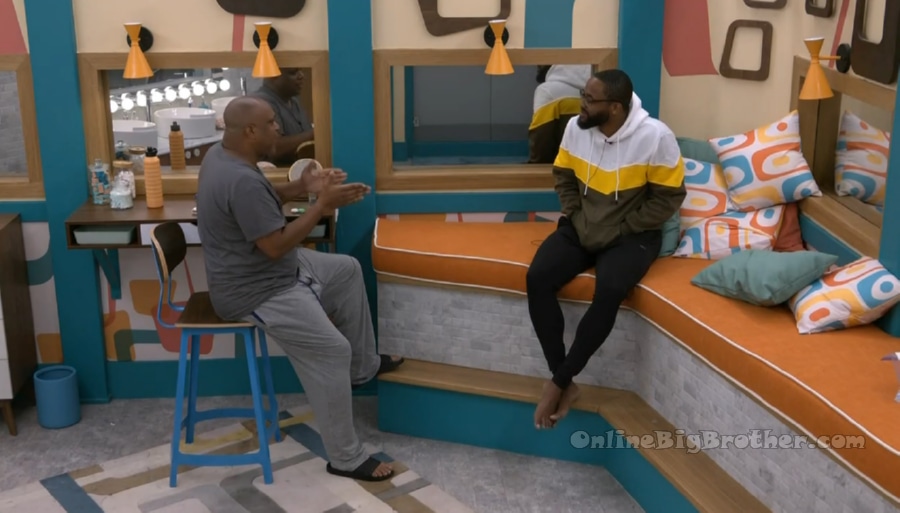 4:52 am Terrance and Monte
Terrance – you know I got you. I don’t know what is coming next
Monte – stay light on your feet. How have you been feeling so far?
Terrance – I don’t know BRO .. I haven’t tried to have a conversation with him (Daniel) there’s no way to have a conversation with him
Monte – a lot of people have been saying that too. You can never talk game with him. You never get one on one time
Terrance – he’s surrounded himself with everybody
Monte – Today everybody is going to try to make some effort.
Terrance – with us we have to take a honest look at what happened last year. That’s got to be on their mind whether they say it or not. You know we’re not going to let them do what they did last year.
Monte – That’s what is on peoples minds. I’m just trying to parlay keep my hand in everyone’s.. you know
Terrance – same with me..

Monte – I have no reason to want you out this week.
Terrance says they have good people “you, me, Jasmine, Indy”
Terrance – Indy … maybe. That will be something solid
They agree to stay solid. 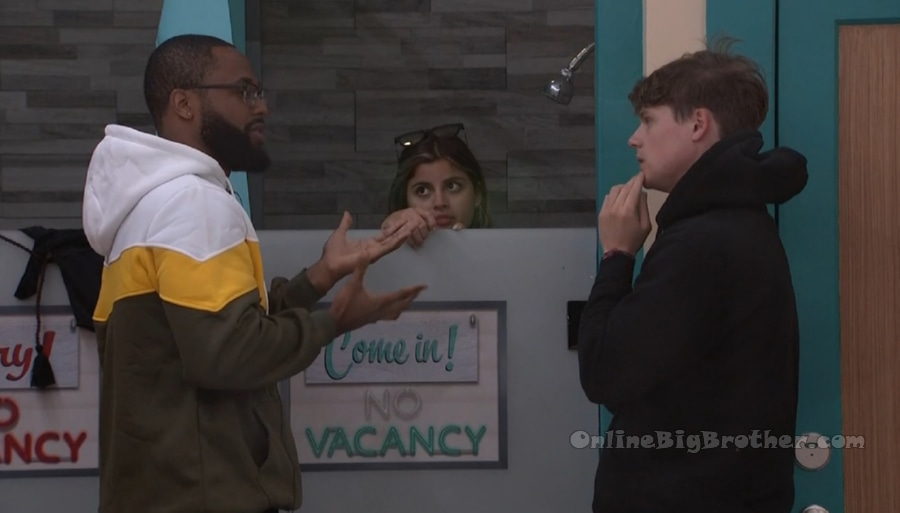 5:00 am Monte, Paloma and Kyle
Paloma – what do you think about POOCH
Monte – if he turns on game mode he might be the one we can have in the six
Paloma – what’s the name
Monte – I was thinking of something when I was in the toilet
they scamper to the bathroom.
Monte “you know KObe Bryant.. what about Mamba”
Paloma – I don’t think that will get passed.
Monte – you think
Paloma goes on about how strict production is with alliance names.
Paloma – I saw POOCH this morning him and turner were talking
Paloma – Michael is so sweet he’s so loyal and I know JOE is loyal too.. I just know we need all angles covered.
Paloma – I have a feeling JOe is going to be put up on the block
Kyle – why would he put up Joe?
Monte – that would be a big move
Paloma – he wants to make a big move

Monte – what is you gut saying?
Paloma – my gut is saying Michael he wants to play so bad.
Monte – Michael keeps his cards close to his chest that’s the only thing
They want to drop POOCH from their group and pick up “maybe” Michael the problem is Monte had already talked to POOCH a bit about an alliance. Nothing official though.

They go back to alliance names. Sounds like they will shoot for MAMBA.
Paloma says her, Ameerah and Alyssa cover all the basses for the girls.
Monte – if you are all good with Michael I’m good with Michael
Kyle – I think so
Paloma – no one is going to expect it that is what this game is all about
Monte – I think we are the first big solid alliance 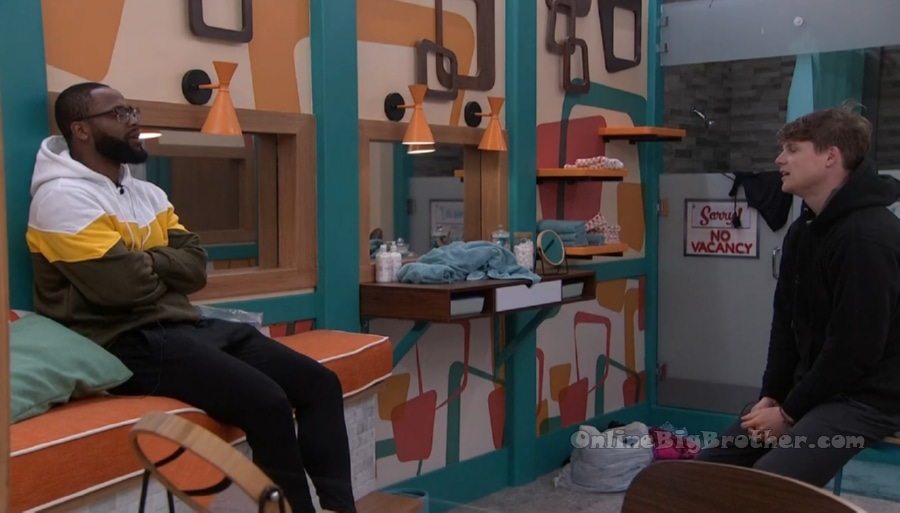 5:22 am Monte and Kyle
Monte – the Michael move that’s a colie move
Kyle – can he win comps
Monte – Michael can hang for awhile..
Kyle – true.. he’s smart
They decide to pause the game talk and disperse. 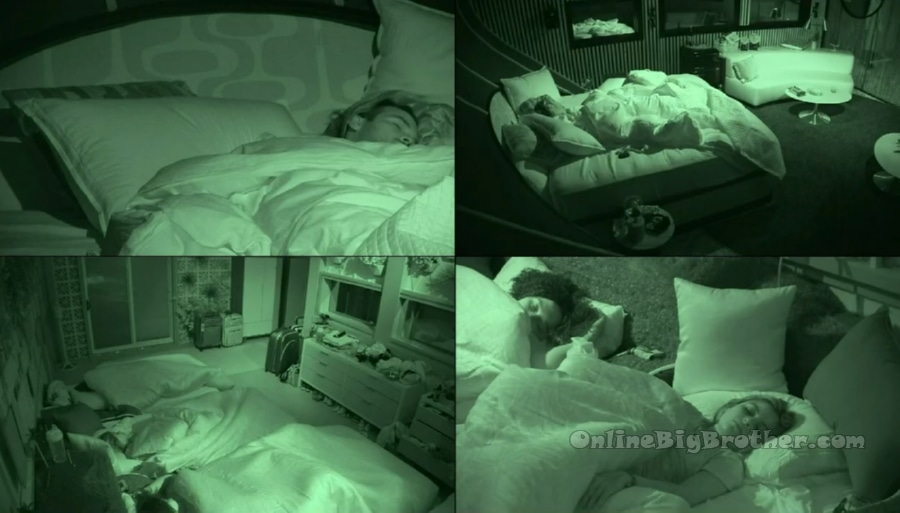 Also if I heard correctly, I just have to laugh at the “Don’t target any Have Nots”

Pooch, Daniel , and Turner talking about Taylor being a ticking time bomb but to some people let’s just put this all on Palo and Alyssa being jealous haha god It’s Taylor’s game play for being targeted everybody not her looks!

Is that what you are sensitive about? You are sensitive about two white women being labeled as jealous of a black woman? lol Let if go! If it walks like a duck, talks like a duck then maybe it’s a duck! Alyssa and Palo have the behavior of jealous women. Plain and simple! The “angry black woman” trope they are trying to give to Taylor is an example of microaggressions. Palo is very spicy and feisty and so is Indy but of course Taylor gets the negative stereotype just for being human and existing. If you were in a house full of jealous girls targeting you for no reason then you’ll become a “ticking time bomb” too. I think Taylor is just introverted and maybe socially awkward but she’s harmless. People expected to see her be the typical black girl with self-deprecating humor and low self-esteem. Some people like to see women like Taylor be humbled but she’s confident and assertive. Sorry.

I hope Taylor gets voted off first so you can stop obsessing over her.

Anyone else think Turner and Hooch whenever they read Turner and Pooch?! Hahahahaha 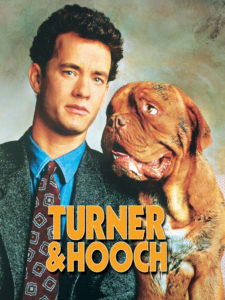 HAHA that’s the first thing I thought. I hope they stick around just for the lolz.

Yes! Me too! I think you should call them Turner and Hooch here on out just so I can laugh every time I see it! Ha!