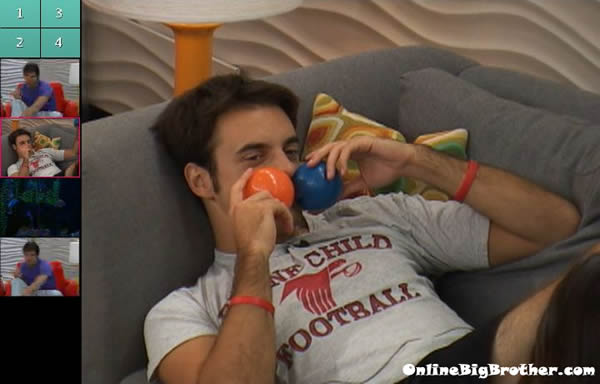 9pm – 9:25pm When the live feeds come back, Dan, Jenn, and Shane are in the living room talking about Jojo. Ian is in the diary room. Danielle brings up how Jojo told her that she is the type of girl that guys cheat on. Shane says that Jojo was too much for him, he could never date a girl like her. Danielle brings up how Jojo liked an*l and told Danielle not to knock it till she tried it. Dan keeps asking what other questions they were asking that night. Danielle says spit or swallow, have you ever done it in a public place, etc. Dan asks Danielle if she thinks Jojo ever made out with Willie. Danielle says that she thinks she did, Willie tried to make out with all the girls. Shane tells Dan how he thought about coming into the house acting like the gay guy. Dan asks do you think you could keep that up 24 hours a day. Shane says no that’s why he didn’t do it that and he didn’t want America to think he was gay. Dan brings up how Ian said that in a different countries Big Brother they had a guy go in that had to act like he was retarded. Shane asks if he got every far? Dan says he thinks so, ask Ian when he comes out. Soon after Ian come out and joins them. Dan tells them to tell them the story about the guy who had to act like he was mentally retarded. He says that guy ate and talked slow. 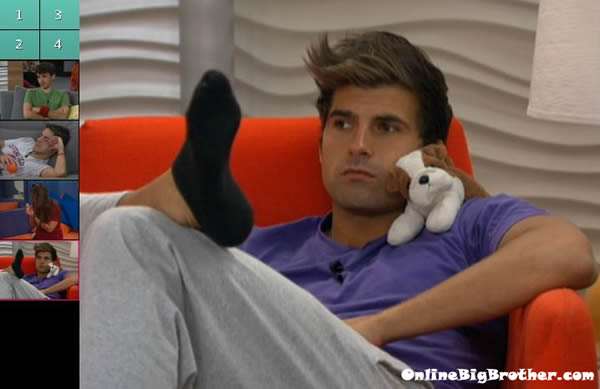 Simon and I work 24/7 all season long to bring you all the live feed updates and spoilers, please consider donating. Any amount is greatly appreciated, your donations go directly to paying the server and bandwidth fees needed to run this site. Donation Link

How did Wil deserve to win??? He didn’t win shit, and had absolutely no strategy..
That comment makes no sense.

No Sign of POV winner yet :( Everyone seems in good spirit

anyone but dan for the win, ABD, ABD…

As long as Ian didn’t win veto, everything will be good.

i hope IaN DOES WIN AND I HOPE WHINY DANILLE DOESNT WIN IT ALL ..THO SHE PROLLY WILL SHE HAS DAN AND SHANE WRAPPED AROUND HER FINGER

Dan and Ian on the block. Shane decides. Get rid of fanboy or the guy that he knows tried to get rid of him. Wow.

Too bad Ian is gone because Danielle won

Shane says no that’s why he didn’t do it that and he didn’t want America to think he was gay.

I know it doesn’t matter since veto is most important, but I want to know the nominees!

still in love with judas baby

How come it says Jenn was there thought she was gone?????

Simon
Reply to  still in love with judas baby

Wasn’t that the cleaning dude with the red streak in his hair?

still in love with judas baby
Reply to  Shrek

Shhhhh… lol that was mean.

The houseguest, that laid low, until the game was about over, oh but left with class, because she did better than me, if I got evictedand being on slop the whole time ,and out comes the offering of a peanutbutter,jelly sandwich. Yea Jenn left with her dignaty

did anyone see the clip of brit and frank fighting in the bb jury house… so disappointed with tonights show .. was hoping to see some action from the jury house

still in love with judas baby
Reply to  marianne

Where did u see that? U have a link?

where did u hear that Brit and Frank was fighting and if so about what?

Here is the clip of Britney and Frank fighting in the jury:

It is a preview for the show tomorrow!!

the Ghoast of Lil' Joe
Reply to  marianne

yup, she is blaming him for her game sucking……

marianne
Reply to  the Ghoast of Lil' Joe

still in love with judas baby
Reply to  marianne

Just thinking of that. Thanks

I saw the clip several times last night, Notice cbs has,nt keeped the viewers up to date on the jury house,

ahhh – feeds back! wonder if we’ll even find out who is on the block before the show tomorrow? hmmm

still in love with judas baby

Ian should win this he’s played the best game eventhough he made a terrible decision putting jenn up….Danielle is love drunk kind of making woman look bad Dans game is ok but the lies will catch up to him… Shane win it but he’s a dormant player

Who is nominated? Disappointed we haven’t seen the jury house yet. Poor Brit – couped up with Ashley, Frank, Joe and now Jen.

It seems as if Ian and Dan were nominated and Danielle won POV!!

Now that Danielle has the HOH, …
Does Shane put out this time or get out?
(Probably depends on how much wine they give her.)
(Remember how mad she got last time she had HOH ?)

He should’ve put out a long time ago, I don’t think she likes him like that anymore, according to the personality that was talking to Jenn

still in love with judas baby
Reply to  DanFan

No doubt it is gross. Her and brit are bad for picking s**t of their faces.

still in love with judas baby
Reply to  DanFan

They should get the pimple popper game…

Funny the very people, like brit, and danielle, were the ones allways complaining about joe,s dirty hands, and since julie chen offered jenn a sandwich after eviction, maybe she will return the nice gesture, and hand danielle a bar of soap, to wash her hands,with some zit cream to go with it.

I missed the first few minutes of the show, how much of the jury did they show. Have they shown other clips from the jury?

I didn’t see any clips of the jury house on the show. At the beginning they just recapped last week.

Just heard Shane tell Dani to “not forget veto” before she headed into DR. Ian is in trouble.

Big Brother 15 All-Stars 2:
The Good, the Bad, and the Floaters

None of the HGs would be made aware of the theme however, and the show would be called like a horse race.
Disgusted, Julie Chen quits the show, finally giving Dawg the job of narrating the show.
After one game manipulation too many, Simon freaks out and takes the set hostage, stoving in AGs skull to ensure a clean game. He forces the production team to continue under threat of being locked in a room with Jessie and Rachael.

The end of this post was heavily influenced by the tone of Dead Set. (Which if you haven’t seen is an Endamol zombie flick taking place in the UK BB house.)

Thank you again Simon and DAWG for enhancing the Big Brother experience.

I just can’t wait until the finale. I hope it’s Dan/Ian or Dan/ Shane. Dan’s gonna get raked over the coals and denied the 500k bigtime. The mist won’t work on the jury.

I’m FAR from sure, but I believe I just heard Shane says something to Danielle as she was walking out of where they’re all talking, like “did you just pick up your veto?” Based on that, that would mean she’s both HOH & POV. That would make sense to me, based on the mood tonight, because I believe Ian would be the least outwardly devastated, since his QP making final four was so personally huge to him….

Nominations are Dan and Ian

Did anybody just hear Shane tell Danielle to “get your veto?” Worst. news. ever.

Sorry, I forgot to refresh. Looks like others picked up on that, too.

Dan and Ian are on the block. His worst nightmare just slapped him in the nuts. Shane knows he tried to ace him out. Somebody has some serious ass kissing to do. I think it’s 60/40 Dan leaves right now.

THE CULT FOLLOWERS OF THE DAN GHEESLING RELIGION

looks like Danielle won POV. goodbye Ian, you made some horrible stupid moves there at the end. now go quack yourself to the jury house and don’t forget to take your hammock with you.

The world is ending this year. Worst final 3 ever. Fuck Danielle. Fuck Dan.

Great…we could possibly be looking at the worst possible scenario of Danialle and Shane being the final 2……………………..UGH!!!

Just saw on another site that Danielle won POV. There goes the game. She’s going to win the whole thing, I just know it. Well, at least now there will be one thing in her life she can brag about that will be true, how she won BB14. I hope it doesn’t happen, but it seems inevitable to me. No one in the Jury House other than Britney has much sense of how to play the game, and I suspect the overall winner will be chosen based on residual bitterness rather than judging how the F2 all played the game. I can’t think of a more frustrating ending , though, than Danielle winning the season.

Saw the memory wall and Dan and Ian are nominated

Is Dan in danger? Or isn’t pretty much certain that Ian is gone? I can’t ever figure out where Shane stands and sometimes I can’t figure Dani out either….I just hope Dan is okay!

when are these stupid girls going to learn …. danielle really now you have to choose between your head and heart. shane is playing he said so many times that he can only look out for himself. would be awesome if Dan and Shane make the final two. if she picks shane for the final two she sure is going to be pissed when he is all over kara at the after show. OMG … these girls that go into the house!!! hopefully, dan wins hoh or else it’s shane and danielle in the final.

Dan and Ian on the block, awwwww shit put your mist repellant ON

If Dani wants Shane in the F3, she has to use the Veto on him (if he’s on the block) because both Dan and Ian will vote him out.

OK, Dan and Ian were nominated, so Shane’s safe and he’ll keep Dan so she probably won’t use the Veto.

It looks like Dani won the POV. Probably Ian is going home. Unless it is Dan who makes the decision and behind Dani’s back goes against her wishes and evicted Shane instead. I would not put it pass Dan to backstab one more time. Dan is definitely playing a nasty game this time around.

Are there any peep shots this season? Just asking for..ugghhh..GrandPa.

What do you all think the chances are Dan mists Danielle into taking him off and putting up Shane? I could see Dan doing that just to make sure he’s not on the block, which means he would control another HoH. Do you really think Danielle wouldn’t do it if Dan asked her to?

no way she’d put her future hubby on the block in final four, c’mon…

maybe shane will remember dan orchestrating brit’s eviction, and will send him packin’…

part 2 of the will show is out! it has dan’s funeral, brit’s coffee, too much!