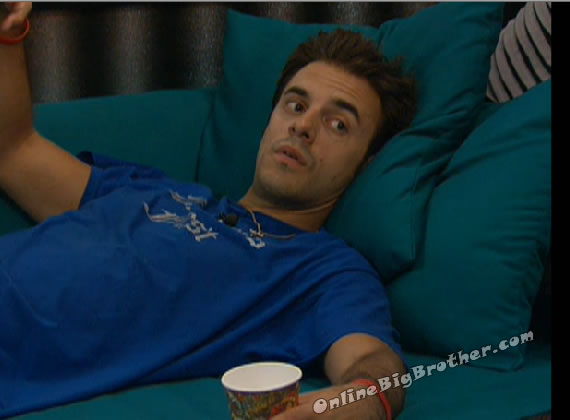 Danielle thinks Frank will put Ian up and try to backdoor Dan.
Dan wants Danielle and himself up on the block

Dan: “Ian said if the perfect scenario came up he would use the POV… sometimes things work this way.. like if you won it or I won it was a waste of a veto.. “

Dan :”Something Bad For Frank”
Danielle: “Ya it was good for use”
Dan: “That wasn’t good for him because 2 people can be protected”
Dan: “Ohh my god I’m so glad I didn’t rat him out.. “
Danielle: “You now have to get close to him again”
Dan: “We can keep 4 out of the 5 safe this week.. perfect scenario”
Dan: “I’m embarrassed.. I’ve never acted like that in this game…” 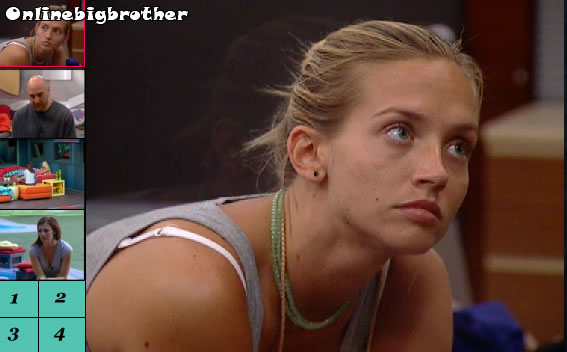 4:50pm bedroom SKAP POrsche opened Pandora’s box and now I have to eat my Keyboard..

SKAP are scrambling saying that the Veto comp will be duos Jordan and Rachel, Shelly and Adam and Porsche and Kalia. Porsche leaves.. Kalia asks them why the BLANK did Prosche open pandora’s box.. it was perfect yesterday.. Shelly: “We’ll a kid her age 5000 dollars is a lot”
prosche comes back.

Adam is trying to be optimistic.. telling them it’s the same as before they need to win Veto this week because the goal is about to get Rachel out of this house.

They start going over the possibility of the POV comp.. Shelly points out that JJ did not win one duos comp the entire time.. Brendon and Rachel won them and it was mostly BRendon.
Porsche: “Their going to scream at each other the entire time”
Adam points out that rachel does not do well under pressure. Shelly mentions it might be the comp were they take punishment. Adam: “Dude i’ll take everything to win that” SPK all swear they will to.

( They don’t know if the comp is played as single or duos.)

SEE what they CAN’T show you on TV! 3 Days FREE No Commitments 5:23pm Kitchen Enzo, Brendon and Hayden Enzo is telling Brendon he has to go up and tell Brit that she is safe next week if he wins HOH. Hey can put her the BLANK up but for now she needs to feel safe. […]

Watch all drama on FLASHBACK! FREE 3 Days TRIAL   3pm Rachel comes into the house and says that she is BACK BITCHES!!! RACHEL IS BACK IN THE HOUSE FOR 24 HOURS!! Rachel asks who is on the block. Ragan said he is. Rachel says oh what a shock, so you’ll be joining me […]