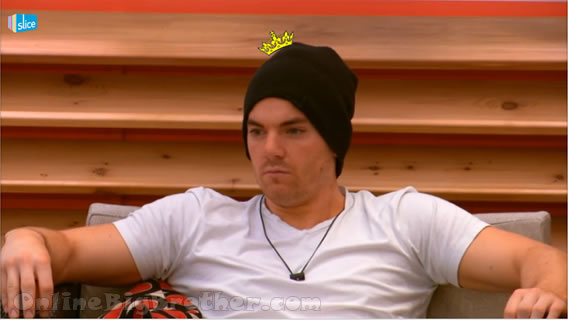 Peter is trying to become a actor he was trying out to be “Background Actor” for the new superman that was filmed in Vancouver but he never got the part. Andrew asks what is a background actor like a extra. Peter says Yes but Extra is a derogatory comment.

Peter: “I want to be a voice agent.. need to to get an agent”

They start chatting about actors that are a$$holes on set. Peter met Tom Cruise and says he was the nicest guy. They chat about christian Bale and how he freaked out on someone on the set. Talk moves to other christian bale movies.. The Machinist, Batman.. etc etc.

It’s your run of a mill morning conversation

Talla joins them and starts telling them she doesn’t want to see pillow on the ground after she’s gone through all this trouble to organize them. Talla also wants them to reuse their towels because right now they are washing too many towels and wasteing detergent. She goes on and on about these pillows and she really doesn’t make sense. Andrew leaves when He comes back Tom: “you missed it” Andrew: “I know I went to look for a gun” Tom: “Everything she said is pointless.. we f**** with her for 15 minutes.. she got mad but now she’s over it” 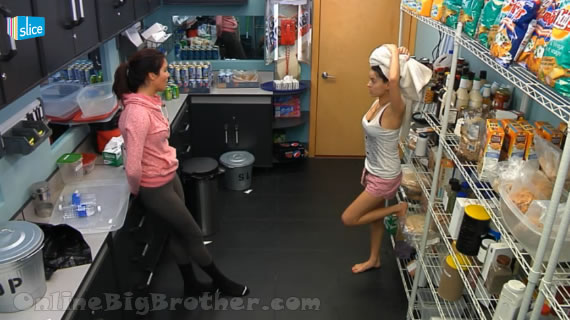 10:27AM Talla and Jillian Storage Room (The audio was messed up for the first minute of this conversation :( seems to be a common occurrence with these feeds)
Talla is worried that Topaz isn’t talking to her, Liza or Jillian she doesn’t know where her head is at.

Jillian mentions that Emmett really doesn’t talk game with her, he just kinda listens to her ideas.

Jillian says she’s been telling Emmett that the girls are easy to beat so they should start targeting some of the guys. Jillian adds that there is only so much she can do until Emmett win HOH then hopefully she can talk him into putting up the guys. 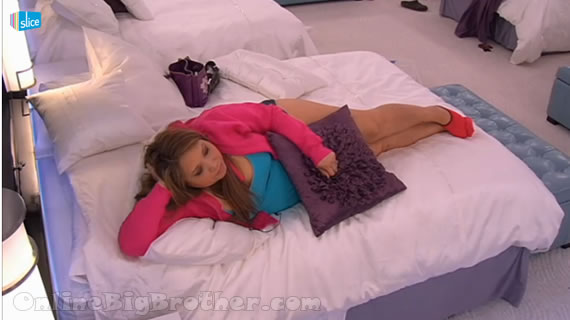 10:37AM Bedroom Suzette and Garry Suzette tells Gary that she’s seen Alec, Peter and Emmett talking a lot and she’s sure they have a final 3. Gary isn’t sure about it he’s thinking that Alec and Topaz are really close. Suzette disagrees, she thinks the “Boys” will drop the girls off in a heartbeat. She tells him if Gary wants to make it in this game he must get in with the “Boys”. GAry is busy working on his brand. While Suzette gives him Mad game talk. Suzette suspects that the boys had a system during the last HOH competition to ensure one of them would win she mentions that “You could see in the mirror all the answers?” . Gary continues to work on his brand while agreeing with Suzette and muttering “Gotta get in with the boys.. how did the boys get to run the house”

Suzette thinks Talla is on the way out after her then Maybe Aneal and GAry. She calls Aneal a rat says he won’t even talk to her. Gary agrees
Suzette: “where I come from we don’t respect a rat.. Game or no game a rat is a rat.. even in prison you’re a rat your still a rat” Gary: “A rat is a rat”

Gary is scared that the showmances are so tight that they might be targeting him next once Aneal is gone. Gary says he can see Alec in the kitchen through the mirror in the bedroom. Gary says he wants to get a makeup expert to learn the style Gary does his makeup then perfect it. 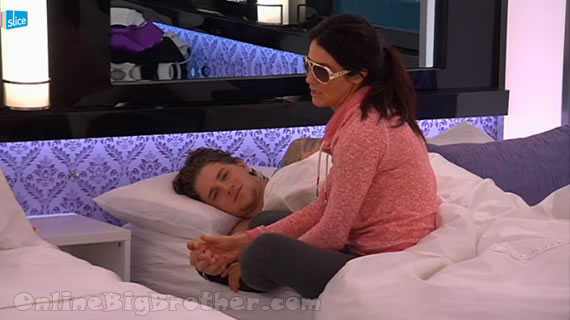 11:13am Bedroom Emmett and Jillian milkmancing Suzette and Gary are also in the room working on Gary’s Brand.. 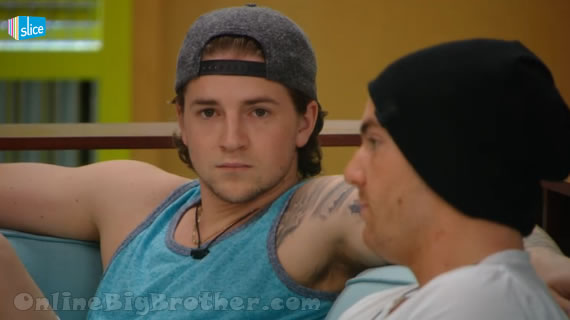 Tom says they don’t have Aneal, Liza has Aneal. Tom is thinking if he wins HOH then he

Tom: “If you win HOH man I know you will put up Aneal and Gary.. but I want us to BAckdoor Andrew”

Emmett: “On a personal level I talked to Andrew and he said AJ doesn’t want to make enemies”
Emmett says he’s worried that Liza is controlling Tom, he’s seen strange behaviour ever since Tom and LIza started spending a lot of time together.
Tom says that Anderw is making final 2 plans with Everyone Lilza included.
Emmett: “She controlling you”
Tom: “She’s not controlling me.. man.. I called her out last night told her poeple are startign to talk about her throwing comps.. ”
Emmett thinks Liza’s next play is to take out one of the boys (Alec or Emmett) Tom:” I won’t let that happen” Emmett: “We’ll if she wins HOH you can’t to f*** all can you”
Tom: “If she wins HOH and puts you guys up IU will treat her like sh!t”

Tom reiterates what he wants the play to be next week. He wants Aneal and Aj nominated and when Power of Veto is played

Tom: “Andrew has a fire in his belly because he likes Liza and she’s with me”
Emmett reminds him that Andrew only likes Liza because she’s flirting with him, he points out that LIza is flirting around with a lot of guys in the house. Tom says he doesn’t feel the same way about Liza as Emmett does about Jillian she can do whatever the F**** she wants.
Emmett thinks that Liza is controlling Tom and the Game.
Tom: “there’s always a C*** Behind the pu$$y my friend” (Wise words from Tom)
Tom asks Jillian if she would put up Aj and Topaz this week’
Jillian says that would not be her play

This is the lamest bunch of people I have ever seen. They are loud and obnoxious.
People should be watching Topaz, she is the one that is gaming. Then there is Talla.
Can anyone be the dumb.

i dont get it why suzette is after Aneal? i was beginning to like the the way she has found out about the boy’s alliance if only she could shake the house before leaving,that would be good to watch.i hope gary is listening and will act on what suzette is telling him but again gary is so caught up with his brand.

Suzette is just pissed at Aneal because he was kinda part of the outcasts and is now ignoring them.. Suzette has essentially given up trying to stay. She really hasn’t tried any campaigning

Peter an actor?
Needs to talk to more restaurant waitstaff/unemployed TRAINED actors!
What’s with all these delusional wannabe “actors”?
And controlling Lisa?
Maybe Alec needs to seriously keep options open regarding his end-game.

Gary & Aneal are disappointing.
Do you think they are emotionally overwhelmed?

If Lisa wasn’t engaging Jillian, would Jillian seriously play at all?
Am I underestimating Jillian?

I love how Tom thinks he is so in control, when he is absolutely being played by Liza. I can’t wait for the drama to start next week. Although I love Emmett, I’m really hoping hoping he doesn’t win next HOH, as everybody is now gunning to backdoor Tom. Can’t wait to see his face when he is put up on the block :-) Let’s just hope this veto twist doesn’t ruin the backdoor plan.

I like that jillian has a mind of her own and won’t let tom just push her into what he wants. As for hoh if tom goes then as much as the boys want him gone it would weaken them it would be to soon for him to go. It all depends on who wins hoh.

I really want Tom gone. Why are Gary and Talla listening to him, willing to do what he wants for his game? Don’t they realize that their only chance in this game is to take out the alpha males? Right now they have the numbers, but they are gunning for each other instead of sticking together to get out the threats! If Gary, Talla, Aneal, Andrew and AJ stick together, they are 5 votes. Gary could probably pull in Topaz, and if the votes are secure, Peter and Alec would be on board too. The only one that is thinking game is Andrew. I am getting tired of AJ, though. I am actually thinking that it is better for the house and the game if Suzette stays and AJ goes. Nobody likes him, even Andrew is getting tired of him. Tom would be livid if Suzette stays, and she might be able to stir the pot and rally the misfits against the guys. This is going to be really boring if something doesn’t change soon. It kind of reminds me of the first few weeks of season 11 when Jessie, PP and Ronnie were running the game. We all know how that ended! I say give Andrew a special power and then the game will open up like it did when Jeff used the wizard power to get rid of Jessie.

Emmett is getting worried about Tom. The way their conversation went about Andrew and Liza possibly having a more firm grip on the King than he can realize himself…Keep it up Tom, you’ll be missing your “big king party” in jury house you were planning.

I have to admit Andrew can be pretty funny. I laughed hard when Talla came out and he went in and back out after saying he went to look for a gun.

Alec could create pretty much his own 4 person alliance if he wanted to. He’s already got Peter and Topaz, he could easily get Topaz to reel in Gary. I personally think Alec is in the best position in the house right now.

I really think Suzette can save herself this week!!! I don’t know what she is doing! If I were her, I would start campaigning; she can convince the houseguests to blindside Tom by saving her!