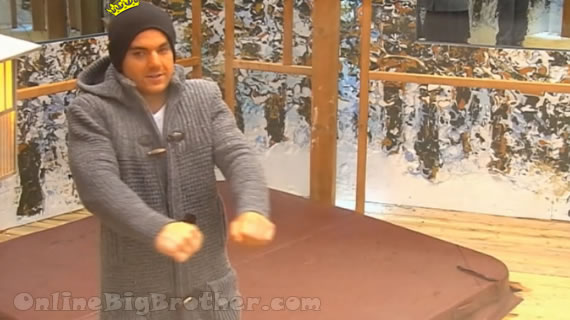 12:10pm Tom and AJ Hot Tub Room
Aj says that Aneal and Gary are not close at all because they saved him last week. Tom thinks That Aneal will put up Garry. Aj thinks it will be Gary and Jillian because Jillian put Aneal up.

Tom reassures him that he’;s safe this week. He tells Aj all he is this week is a “Seat Filler.. I just made that word up you are a seat filler” Aj: “The biggest thing I’m worried about this week is what to wear on eviction night, “I’m the pawn of pawns”. Tom: “No you are a seat filler” Tom thinks AJ, Anderw and himself should talk game more often but they have to be careful because of Liza, “Andrew is vibeing Liza” Aj points out that Liza is vibeing everyone in the house.

Aj is saying that Aneal will probably put up Jillian if he wins Head of Household
Tom: “Who is the male version of Liza in this house.. Peter.. he’s good with everyone.. he doesn’t win competitions.. Peter and LIza are playing the best game socially”
AJ thinks that Liza is playing too hard she’s trying to make everyone think she cannot win Competitions when they all know that isn’t true.

AJ mentions that Suzette had a chance in the game but it all flew out of the window when she had the blow up in the Storage Room. Aj likes Suzette as a person, as a mother and person she is great but as a Big Brother Game player she is the worst player he has ever seen.

AJ: “She’s older than everyone else but she’s not the brightest light in the chandelier”

Tom instructs him that if he wants to make it to Jury AJ needs to make strong alliances with Andrew and talk to Emmett and himself, You guys gotta win HOH”. Aj thinks Andrew will win the HOH. Tom agrees says he’s got something to prove “He see’s all these young bucks around and he’s got fire in his corner”

Aj says he doesn’t think Liza will make any big moves yet, He trusts Liza she seems like someone who will not put him up, “She doesn’t have the votes anyways”

Tom: “Liza has everyone in this house figured out” she has everything but brawn and that is why she’s attached to me. Tom understands that Liza is sleeping with him at night to keep him close, he sees it and isn’t worried.

Aj says if Talla goes up on the block even as a pawn she will freak out and get herself evicted. 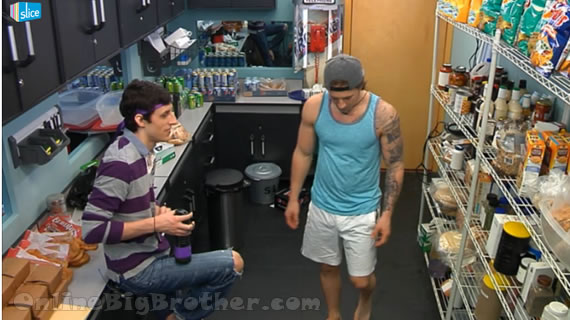 12:50pm Emmett and Peter Emmett tells him that Liza has all these final 4 plans and Emmett isn’t in any of them. Emmett is thinking about backdooring her when he wins HOH. Peter is against this plan says if Emmett does that it will start a war with Tom, “It’ll cause a BIG rift and i’m not sure we are ready for that type of shake up”. Emmett is convinced that Liza will put him and Alec up or backdoor one of them. Peter keeps trying to protect Liza he thinks that Tom needs to be talked to and everything will be alright. Emmett says that Tom has been throwing Topaz’ name around. Emmett brings up how he confronted Tom about the ideas he’s been having, “that stupid b!tch gave you these idea I don’t like them” Peter: “Tom’s thinking with the wrong head right now.. that will be the test if the play is for Andrew then we know what is going on” 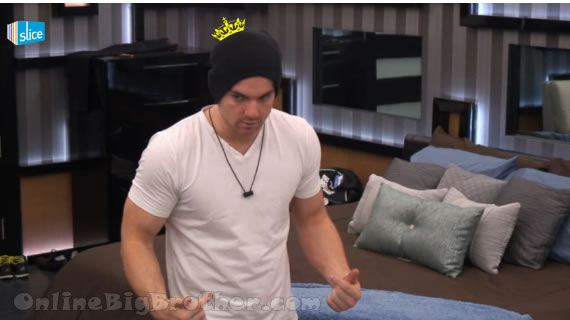 1:00pm HOH Tom, Gary and Talla (Essentially you have 25 minutes of Tom trying to convince Talla and GAry that Andrew is the target)
Tom: “Gary you need to win HOH this week or you will become a target.. Who would Andrew put up if he won.. you and Aneal”
Tom asks him who he would put up if hew won HOH.
Gary doesn’t know maybe Aneal
Tom goes on and on about Andrew wanting to win the HOH really bad, Aj had confirmed it with him earlier, “All i know Andrew is GUNNING for this HOH and he’s going to put you up.. i’m not trying to scare you Gary”.
Tom adds that Andrew might try to backdoor him because tom’s his biggest personal threat in the game and he’s the guy sleeping with the women he loves.
Tom adds that Liza is playing a smart game she has connections with everyone in the house, “She reaches everyone.. she’s the female version of Peter”
Tom: “I like Liza she’s the puzzle master she’s the queen but the one thing she doesn’t have is physical Brawn” (He points to his abs)
Tom: “She thinks she has me but I’m smart i know what she’s doing.. As far as I am concerned I like her a lot and never going against her but i’m smart to, I don’t want to be backstabed.. She will never backstab me though”
Tom explains that it was Liza that explained what Andrew was doing and he believes her because she’s a smart girl, “she needs me as much as I need her.. I need her mental power because I cannot reach where she can reach”.

Tom says that him and Liza think alike.. Tom says if Andrew wins HOH he’ll put up Gary and Topaz, he warns Gary not to tell Topaz this because she’ll tell Alec and Alec is close to Andrew. Tom: “If Aj or Andrew win it all of us are in trouble.. i’m just trying to be quiet this week i don’t want to tell you what to do”

Tom: “Andrew is floating by.. he’ll make his move once we get to jury”
Gary: “He is floating.. ”
Talla: “He’s gotta got next week”

(Tom really works them to take out Andrew. he actually spews out a lot of information much of it will hurt his game Talla won’t clue in but Gary might once Gary tells Topaz it’ll go to Alec. Talla is clueless BTW ) 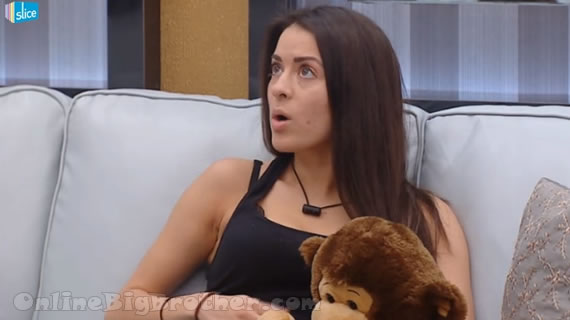 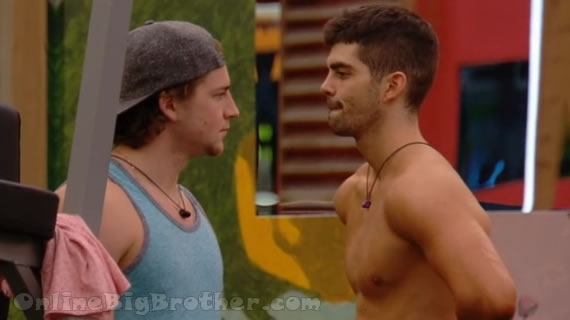 Emmett is saying that Liza is in this game to win it and she’s running Tom. Alec: “I know she is man.. and I know Pete really likes her.. . petes a smart guy too.. we can talk to him.. we need a f**** locked door in this house” 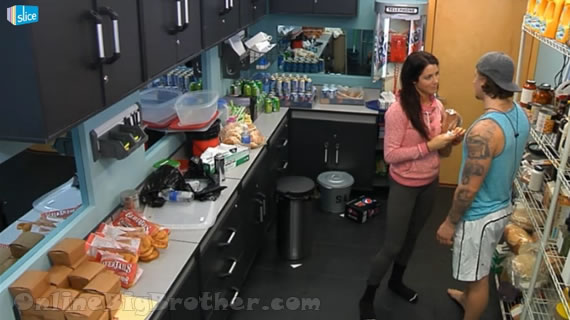 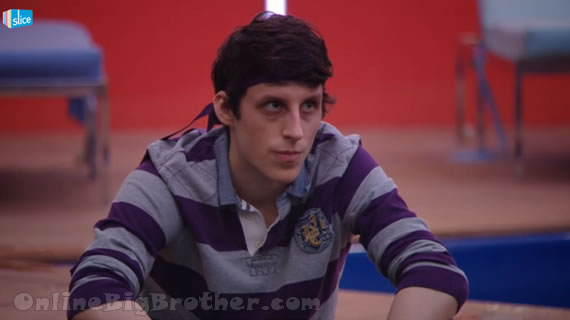 2:00pm BAckyard Alec is telling Peter that sh1ts gotta stop with Liza none of them trust her.
Alec doesn’t want to bring Emmett into Final 4.
Alec: “With Liza and Tom I say get them before they get us.. I don’t think Aneal can orchestrate a move”
Peter Agree about LIza and Tom but disagrees about Aneal he thinks if teh circumstances are correct Aneal will make a power move. 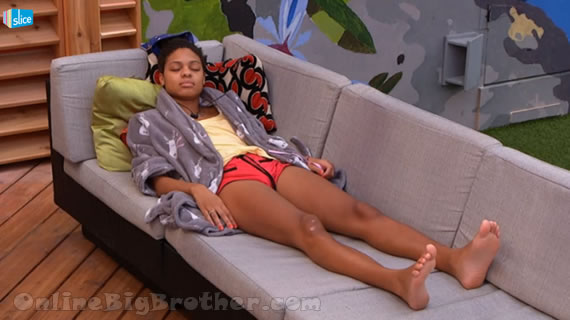 I wish Emmett and Alec could make the connection that Peter wants Liza around for a reason… Haven’t they seen the two of them talk before?

100% agree with you Violet! Going to Peter and trash talking Liza saying you need to boot her is like trash talking Jillian to Emmett. He’s not going to listen and will defend her all the way. Peter is thinking with the wrong head this time. Alec and Emmett should definitely understand this based on what they have seen with their own eyes.

I would like to see Emmett and Alec team up. They have Jillian and Topaz and Topaz has Gary. I think Andrew would go over to them as well so they could essentially control the house because the only other person left on the other side that could win comps is Tom and he can’t win them all.

Can you imagine the s#$t storm that will hit that house if Tom gets put on the block?? And even better if it was a backdoor and he was up there with Liza?! That would be the biggest play of the season I think!

I have a feeling this entire house is going to explode soon with Tom being in the centre of it.. Liza and him are doing too much talking. Peter can only protect Liza for so long.

Good call. I think Peter is actually tipping his hand a little too much, but that’s what’s so great about not having vets. There are no ringers; no Dan or Will who can play a perfect game.

She really has him brainwashed Liza isn’t playing a very good mental or social game if everyone knows you are doing it and since tom is in an allience with peter and alec why is he throwing his name. Tom diserves to be backdoor he is almost asking for it lol. Liza isn’t as smart as she thinks last night she said that emmit and jillian were sleeping through the game when in reality they are both playing it just they are both smart enough to play it under the raidar. Of course gary is going to tell topez and she will tell alec who will telll emmit and peter and emmit doesn’t need anymore convincing that he wants liza gone with good reason she is playing way to hard to early and she will get burned.

Simon/Dawg can either of you clear something up for me please? Did I miss something about the POV and a surprise happening? I have read back in a few posts and comments and seen some commenting on a surprise that will be happening.

Apparently Canada gets to be involved in the POV.. not sure when though.

As per an email from slice.ca, the Chevrolet PowerShift will be announced during Wednesday’s episode. Voting will be on the bigbrothercanada.ca website ending at 2pm ET on Thursday.

Ohh sweet thanks.. so it’s this week we’re the audience gets to manipulate the game. Kinda a waste given who is on the block.. still it might mean AJ will given the boot just drive Tom crazy..

Here’s the info on Power play 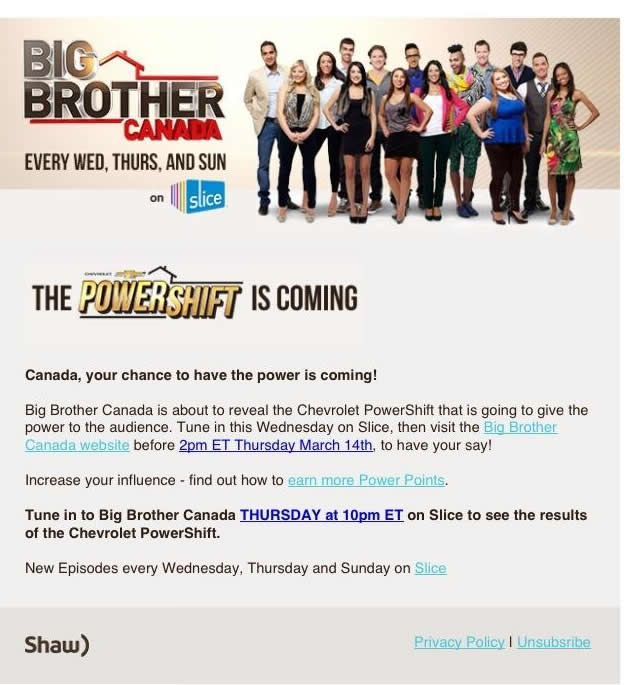 The house gets a punishment for Jillian “supposedly” sleeping but Topaz gets away with it? But then again i rarely see her awake

Wish Canada saves Suzette with the POV. It will be so interesting to watch Tom get mad.