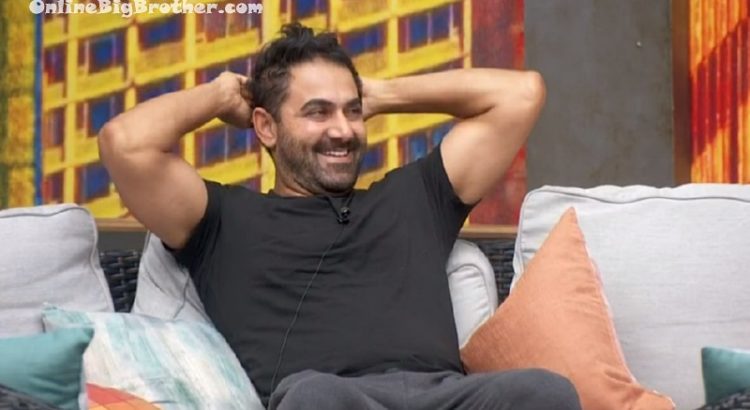 There’s been little action in the Big Brother house this morning. Mostly just people getting up working out etc.. 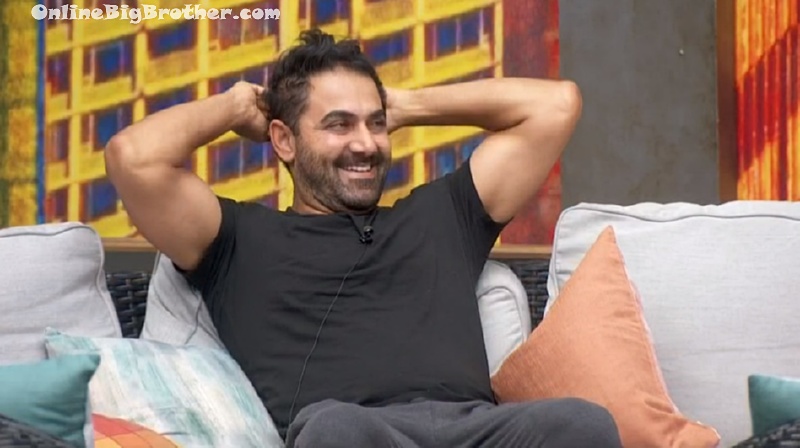 9:53 am Kaysar and Bayleigh
Chit chat about how hot it is outside.
They talk about how hot it’s going to be today.
Bayleigh says how happy she is that it’s hot but she still misses Swaggy-C
Kaysar – Sorry Swaggy-C she’ll see you soon but in the meantime, She’s hanging out with ..
She looks at Kaysar.. “don’t say it.. don’t say it Kaysar”
Kaysar – Swaggy-K
They laugh
Bayleigh – don’t worry in the meantime she’s got the knockoff version
Kaysar – she’s hanging out with Swaggy-K
Kaysar – she’s got the bootleg version of swaggy.. Swaggy-K little shorter a little older not as interesting
They laugh
Bayleigh – It’s fine it’ll have to do .. oh my god so funny
Kaysar says he didn’t bring any t-shirts so he’ll throw out his polos but there’s not crowd because of COVID so he’ll give it to Julie Chen.
Bayleigh says now one of her friends is going home it’s getting awkward.
Kaysar – I feel like I can trust you.
Memphis comes back. 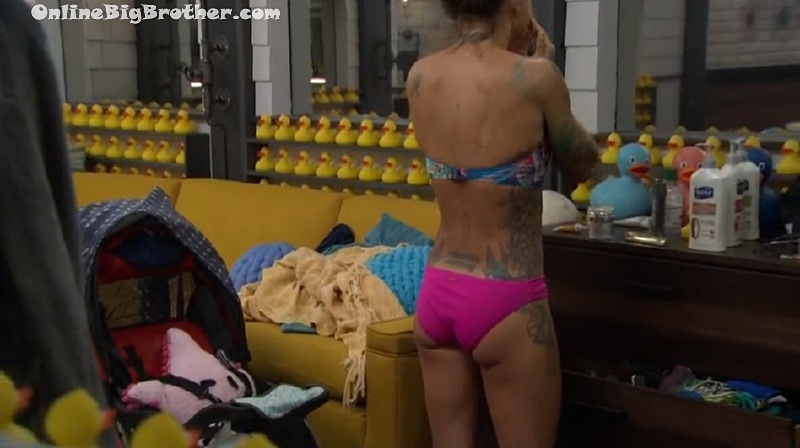 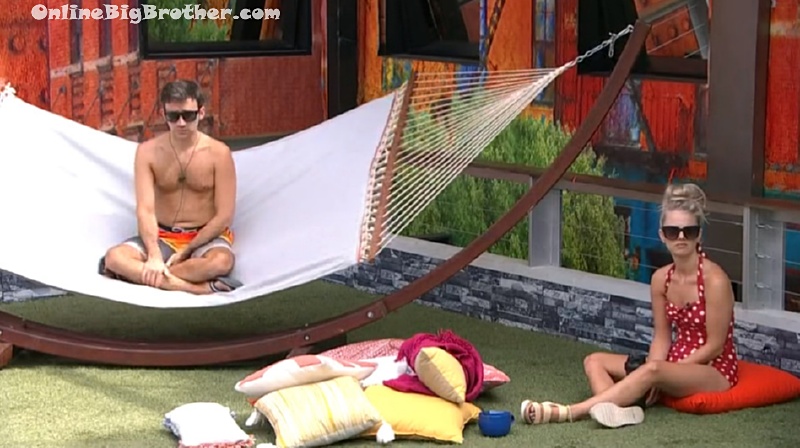 11:00 am Ian back to rocking the hammock..
He chit chats with Nicole about the beer he felt the beer he had last night. 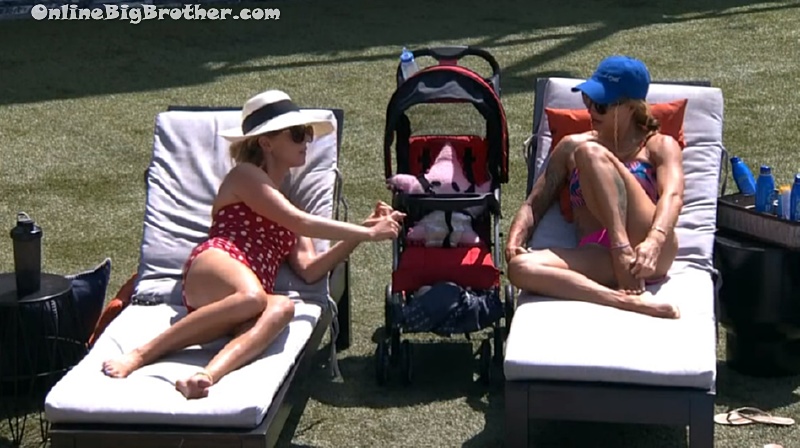 11:17 am Ohh neat Nicole is talking about her wedding plans to Christmas. It’s a three-day event she has three dresses..
This is fun :) 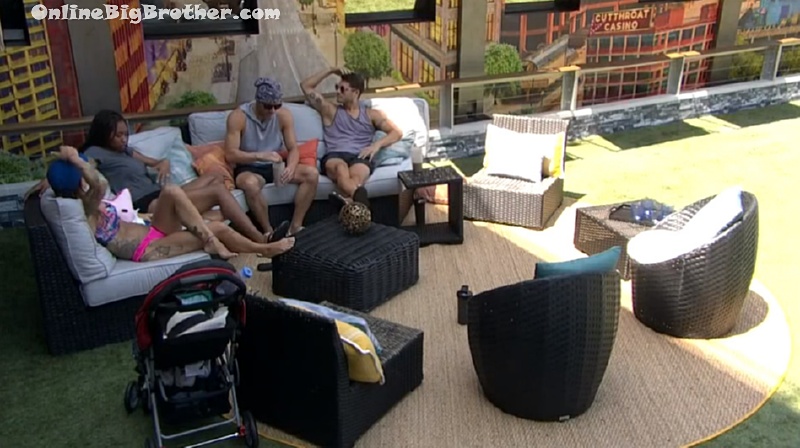 12:21 pm Kaysar saves the Duck. On the other feed there’s a close up of fan-favorite Nicole 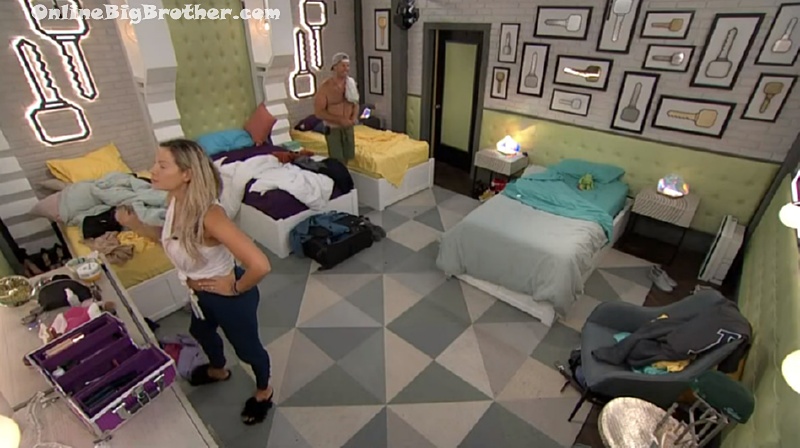 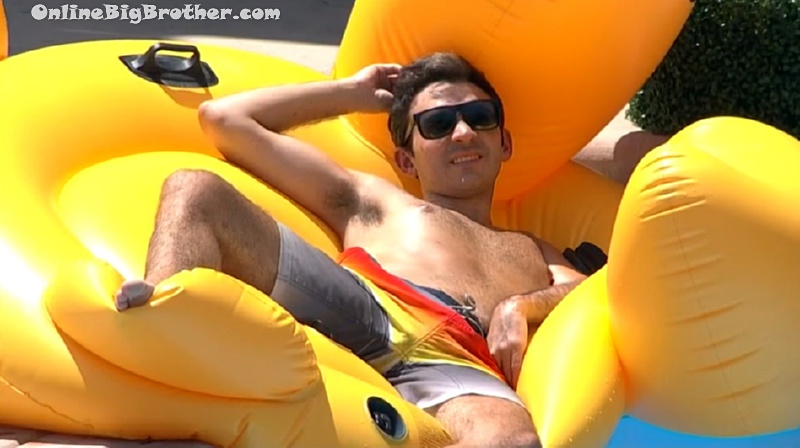 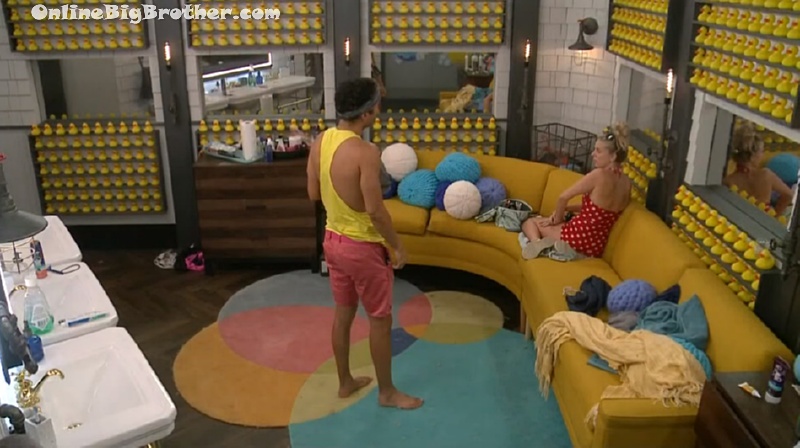 1:05 pm Nicole and Kevin
Agreeing to vote Janelle out this week.

Can Kaysar get any cuter…. Swaggy K. I adore this man

Met him years ago in Disneyland. Nicest guy EVER!!

Vow, so Nicole and Victor are having a really big wedding. Poor Janelle will miss the wedding of the year as she got uninvited.

I would give anything to be at the wedding. There will be so many BB stars

There won’t even be one…

The Beef
Reply to  BB22SomeStars

Oh I think he’ll go through with it. I give it three years. Tops.

My brother broke up with a girl bc she was whiny & needy, says Ratcole is even worse. Victor better get used to saying: “Yes, dear” for the rest of his life

What’s the over/under for when Vic wants out?

What did Victor see in her? How could he stand all that whining?

A tv wedding? Money? Chances to appear on CBS for more shows? They’re both delusional?

lol. I like her but i think her whining is part of her game?

Lol Raticole is even delusional about her Destination Hollywood BB wedding event of the century . The fashion icon she is needs to make appearances in 3 different dresses. WOW! This may make the tabloids if she pays them enough.

Haha wow, Nicole would have the ego big enough to have a three day wedding w/ three different dresses. I can only imagine the bridezilla she is going to be.

I had a 3 day wedding in 2003. Only 1 dress. Multiple dresses weren’t a thing then and not really my thing anyway. It’s not uncommon to have 3 days. Friday rehearsal dinner, Saturday wedding, Sunday brunch and go. Our friends still talk about how much fun they had, as do we. I don’t like Ratcole one bit and find her super annoying. If you’re getting married you should be happy and excited, nothing should get you down then because you’re so happy.

The Beef
Reply to  LAMom

Is that a three day wedding? Then aren’t most weddings at least two day weddings, because most weddings have rehearsals and rehearsal dinners the night before? I know mine did, and most of the weddings I’ve been in (I’ve been in a bunch, although it’s been a while, I’m older now) did too. So what’s the big deal about adding a brunch on a destination wedding? Hell, that’s the least you should do for your guests if they pay big money to travel to some island for your wedding and pay big money to stay there for you. Of course given that selfish b!tches nature, she probably expects the guests to pitch in and pay for the brunch, and pay for their own dinner Friday night.

Julie’s been dropping hints…sarcastic on episode 1 about she’s “sure” that NicF isn’t a bridezilla…her comment to Dani was more about watch out for her everyone, Dani has been busy in the house (looks busy, looks like Busy…).
Julie always drops hints, she’s just more clever than most.

That wedding is going to cost someone a fortune.

So tired of listening to these whinny little bitches that win hoh and complain about not wanting to get blood on their hands. Or they say how much they want this person out but say it is too early in the game and nom the easy target that nobody cares about.

TmM
Reply to  Krusty the Clown

Right?! Isn’t this All Stars? Every single week they should be putting up the big threats, especially those to their own personal game.

Krusty the Clown
Reply to  TmM

Memphis threw a tantrum last week because he couldn’t get out Ian. The dumb ape didn’t tell his alliance members his plan and xmas picked Ian as her plus one. So, he passes a chance to take shot at someone big and targets David and NicA. Absolute waste of hoh. Everyone in the house is running around talking about backdoor plans but nobody has the guts to do it. Week 1 and 2 could have been backdoors but I am afraid and it is too early.

Gee.
Kevin and Nicf agreeing to vote out Janelle. I’m. Flabbergasted. What a shock.
I thought they liked her. okay. that’s the most sarcasm i can put in one thought without my eyes rolling right out of my head.

Wedding. Don’t care. Won’t be watching if she cons cbs into giving her a special. Never cared. Could not possibly care less.

This crying baby crap. I guess the lack of costume is what? Can’t shine a turd and make it likeable with a costume so why bother? We’ve already had the crying baby punishment going on for three weeks. Nicf is there.

Going to go out on a limb and assume everyone, by this point has figured out I greatly dislike or have no respect for Nicf and Xmas. I’ve never really liked Cody, Memphis or Kevin either (I didn’t even remember Kevin’s name… I was sure he was named David for years). I’m not a fan of actual David because of his hypocrisy in the game and real world. The rest i am somewhere between ambivalent and like, but in terms of past game play, have reservations about most of the rest. In terms of past game play… I don’t see any reason why some of them should be there.

side thought:
Janelle says her kids watch feeds, but the nanny turns them off if the house guests are saying mean things about mommy.
Janelle’s kids have not watched ANY feeds then.

Ribbet
Reply to  another name

Jaysar3456
Reply to  another name

“We’ve already had the crying baby punishment going on for three weeks. Nicf is there.“ bahahaha I’m dead

I thought this was accurate. 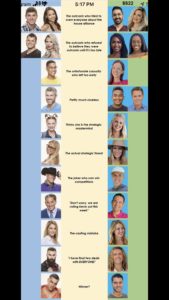 The Beef
Reply to  Bibbobaby

Actually, that’s pretty good! You’ve got a lot of them right on, except Dani is a lot more strategic and on top of things than ol’ numb nutz Raven ever was. She thought she was the general though for sure. lol

I know this is a long shot but why doesn’t Kaysar make up a lie, act kinda off and pretend like he found a secret power somewhere in the house and tell Tyler that keeps him safe and one other person safe for 3 weeks. He promises to use it in Tyler and that way Tyler might weigh using the POV. It’s a long shot but I feel like if he add some Dan G. Vibes it might work. This way one of them gets off the block and they figure something else out for Janelle. This probably sounds so stupid but it’s better than then being sitting ducks…Some elaborate fake power scheme.

another name
Reply to  Maybethisisstupid

House guests wouldn’t buy the find a secret power schtick.
Mainly because usually there is odd camera activity surrounding the hunt for a secret power, or in some cases, every house guest except for the searching houseguest are put on a lockdown. BBUS is better at hiding this than BBCAN, but in both cases there’s a sketch factor that the house becomes immediately aware of, even if they don’t say something.
Cody has already said he went to production complaining and told them he walks if anything saves Janelle and Kaysar. Before veto.

Maybethisisstupid
Reply to  another name

Shoot, I had a feeling and thought it was a long shot but I’m desperate for something to save them.
Does Cody really think that many people would care if he walked? I wouldn’t.

Jaysar3456
Reply to  another name

Cody saying that is reason enough to do it! I don’t want to watch another minute of him on the feeds.

BB22SomeStars
Reply to  another name

Who does Cody think he is, Dr Will?

Let him walk! I’m betting they have iron clad contracts against such a thing, not to mention he’d be walking with $0 because they surely wouldn’t pay him if he did such a thing. It would only be a catastrophe for CBS if he took three or four players with him, and I’m betting that wouldn’t happen because they are all so hungry for fame and attention they don’t want to risk pissing CBS off, and missing out on any future opportunities, not to mention THIS shot at $500,000.

Mar
Reply to  another name

I’m watching season 6 for the first time. I think Howie made a mistake nominating James and Sarah.

another name
Reply to  Bibbobaby

Howie made lots of mistakes.
Howie… i still don’t know how Howie ever passed a psych eval.

How are you watching??

CBS all access has all seasons.
If you never saw the first all stars seasons watch it. It was amazing and filled with actual all stars/favorites from the first six seasons.

How does production mind f*** the houseguest by simply waving the carrot in front of them that a power might be coming. So they get scared and don’t want to take a shot at any big targets.