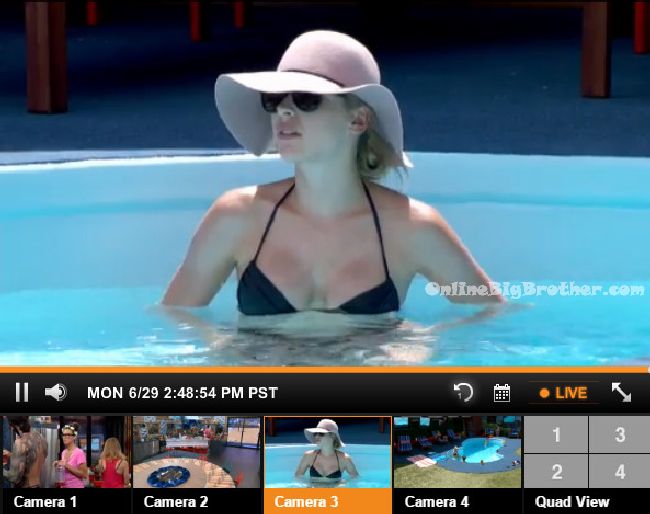 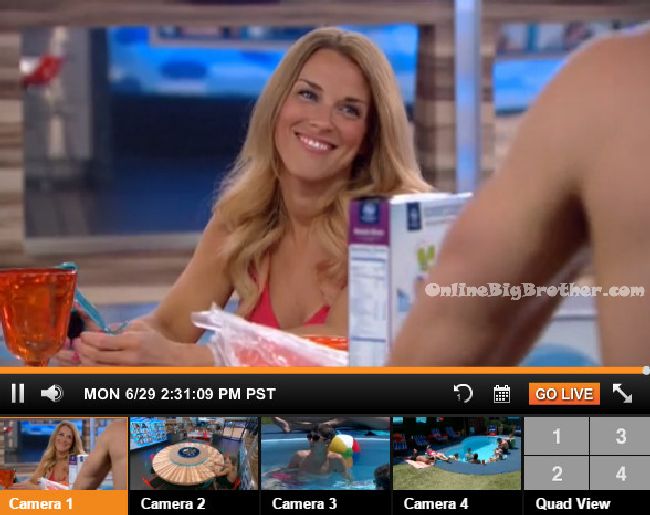 2:30pm In the kitchen – Shelli talks about the Twin Twist from BB5 – Shelli asks can you imagine this house without the other floor with the HOH. Jace says I definitely didn’t watch the earlier seasons. Shelli says there was season five where they had these identical twins, that like switched off. Nobody noticed! I mean like it was crazy. One of the twins was married. I think they switched off every 24 hours. They only had like 15 minutes or maybe not even that. They had to make it through 5 weeks and they got like 50K for that. Then after no one noticed both twins entered the game.

3pm In the havenot room – Jace tells Vanessa I’m probably going to take a nap too. For no reason formulating plans. Vanessa says I have no idea what to expect. Jace says expect something cool. Expect Jace. They talk about how uncomfortable the dentist chairs are. Jace says if I were you I would go up on the block as much as you can because then you get an chance to stay. If I had an opportunity to compete in that comp I would have won it. If I stay this week I will volunteer every week to go up on the block. Jace asks what do you think I am going to do in front of 9 million people… put on a show. Vanessa asks if she gets a preview. Jace says no. 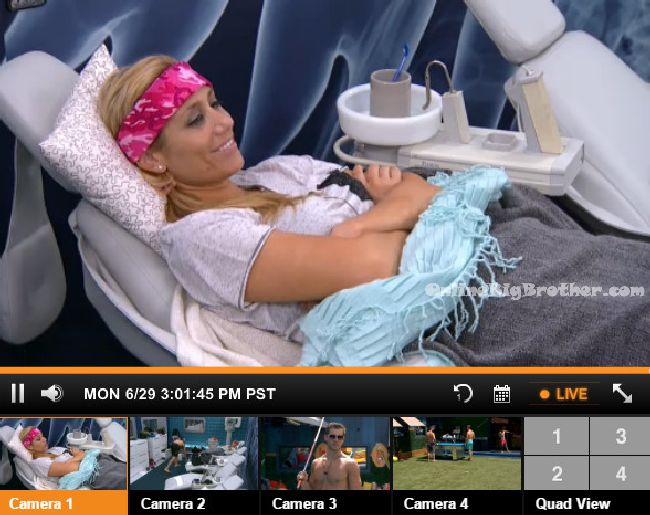 3:05pm – 3:10pm Jace heads to the other bedroom and tells Audrey and Meg that last night he had a dream that told him exactly who stabbed him in the back. I don’t think I’m even going to call them out. Before I went to sleep I asked god to show me who it was and then I had the dream. I’m obviously not going to confront someone just because of a dream. Jace tells Audrey our arguing is done. I like you and arguing with you was retarded. Audrey says I actually don’t think you’re the source of the drama in here. Jace says I want to go out on a positive note.

[polldaddy poll=8954355]
Live Feed subscription gives you CBS All Access thousands of archived shows. Live Shows like Big Brother, all the Big Brother Seasons, and 24/7 coverage of what is happening inside the Big Brother House. Plus there’s flashback that lets you go back to any second of the feeds and rewatch what happened. Simon and Dawg will index the season just watch the parts worth watching.
All this for $5.99 a month try it out 1 week free. Support our efforts and get your feeds via a link on this site. Live feed subscritpion Sign up

Well – have the Thought Police shown their hand re Shelli’s comment – too soon for this info to come out. But having said that – I’m not following the beginning too closely,

Geez, I’ve had a lot of catching up to do (long day at work).

So basically everyone minus Clay, Shelli, Becky, and Johnny are aware of Audrey’s lying, but still seem hesitant to take shots at her.

Clay’s obsession with Da’Vonne is starting to get as creepy as Audrey’s psycho eyes.

Jace is finally content with be the first evicted (unless we get some surprise fireworks Thursday). If he does call a mastermind out, let’s hope it’s the right one (#stopblamingDa).

Next weeks HOH’s are going to be pivotal in the direction of this season.

Johnny has been told. And Clay knows he just thinks he is in the “in” with her and trusts her- Shelli knows a little too. I don’t think anyone is afraid to take a shot at her. I think there are several people who will go for her next time they get a chance. Others like Jason and DA want to use her for information and take out people they feel are bigger threats aka Austin, Liz, Vanessa, Becky. And in all honesty now that everyone knows Audrey’s game she really isn’t a threat.

Yeah, his hatred for her is puzzling and annoying. What’s the reason?

Every year it’s the same thing and I wonder, why don’t they give these people something to do? What harm can it really do. Supposedly they only give them the Bible & rules of the game to read, chess is the only allowed board game and the scant amenities outside b/c they want them to have little to do and are therefore forced to talk game. To a point this make sense, but I think they would get more live feed subscriptions if they could see them doing something interesting or attempting to do something new. It would also make for better episodes if they show footage of them doing something besides talking game, sleeping, working out, sunbathing or swimming. This is the main reason I don’t think I could ever be on the show b/c after one week of idle activity I would go insane. I could put up with a lot for 500K, but I have my limits and this would be one.

that was the nice thing about BBCAN3, there always seemed to be a task or a secret challenge. the nice thing about having sponsers like that lol, and HGs could win cash or prizes. rather than everything being about HOH and Veto in other words, and giving people something to work on, and live feeders to watch.

i think it is odd that of all the things and all the seasons, someone (shelli) should come up with a twist from season 5, over 10 years ago, about the twins given that we have 2 identical twin HGs and one non identical HG twin, and that at least one of these sets of twins is playing doubles.

i didn’t realize before that Liz has an identical, she mentions how her sister is a big live feed fan,

Liz, Johnny and Jeff have identical twin siblings and Shellie has a fraternal twin.

I hope jace does not get evicted, but it won’t be a unamious vote maybe. Austin will have to force becky or shelli to flip to save jace that is the only way because jason and day are not flipping. I can’t wait to see what happen in the pov ceremony. It suck jace is leaving I felt a bobby/hayden vibe from him it just sucks. My fave going forward will be austin, james, johnny mac, vanessa, steve, jason, and maybe davonne. For my favorite houseguest if he goes into jury will be johnny mac and james but it will depend on how they play the game when its jury phase. And when will jeff probst enter the bbtakeover can someone ask him I know for sure he will be there to promote survivor second chance. I wonder what will be twist for him maybe immunity idol, two votes, or maybe another cast. Liz is the twin for sure because 3 reason she does talk about her sister on the feeds, her sister did not appear in the second episode when her family say goodbye to her, and third she was the only person to wear a blindfold when doing the interview check her interview with rachel odd.

Why does everyone like Johnnie Mac. What am I missing? I rarely see him or hear him say anything on the feeds. and on the broadcasts he does that weird, fake, schreechy voice in the DR.

I don’t get the Johnny Mac thing either. He doesn’t register strong emotion with me either way (I don’t like or dislike him). Just another HG who’s told to shout loudly in his DR sessions as far as I can see. Otherwise he’s a background player,hardly noticed.

I think that’s the point- at least for me, I like that Johnny Mac is laying low on the feeds, because it translates to laying low in the house. Pretty much no one is gunning for him, and he’s been likeable.

I also just think that when he does show on the feeds, the moments are absolutely golden…

plus, random sidenote here: if you can find it online, look up his youtube channel, because I watched a couple of his guitar videos, and he’s amazing!!! Also, steve has a youtube channel as well with videos of his singing, and they’re quite precious.

considering the theme of next season’s survivor is second chance, undoubtedly probst will show up when they do the whole america votes to bring back an eliminated contestant twist they’ve consistently been doing the past few seasons.

Johnnymac reminds me of Ashton kutcher in diary room.

Hey .. Dawg .. Simon .. Quick question … This is my first check in to your boards this year .. I have only watched the first episode and the third one … Something felt immediately off this start .. It felt .,,, SCRIPTED !! Oh no !!! Did this show become completely planned out ?!!! All the shots felt forced and even the ONE alliance with the Asian, trans, homosexual, and African American seemed completely staged and ugh … The battle of the block was such a failure last season as it was exploited immediately by doing the numbers and putting an alliance of 8 together .. Obviously that needs to be done if you wanna defeat battle of the block .. Where is our alliance of 8 where is the million first day alliances ??!!!! What’s going on. (Yes I know the other four girl alliance but that dissolved immediately) IS IT STAGED ??????? Let me know and I’ll keep checking back!!!

Tons of alliances going on some of them are outlined here. http://www.onlinebigbrother.com/big-brother-compendium/big-brother-seasons/big-brother-17-alliances/

Thanks .. That makes me feel ton better … Ok I’m in !!! I’ll be reading, lurking, and randomly commenting all summer long !! You and dawg are awesome .. Love the transcription and love knowing what goes on before my family lol :) oh and I’ll be voting dawg in all the polls .. I’d vote for you too Simon but you are hardly a choice lolz :) .. High rolllerssss give me some fun summer reading !

Really believe that Liz is the Twin Twist! She never looks the same.

35 yrs later and I still dream of you

Wake me when they get some real cast members and get rid of these mannikens.