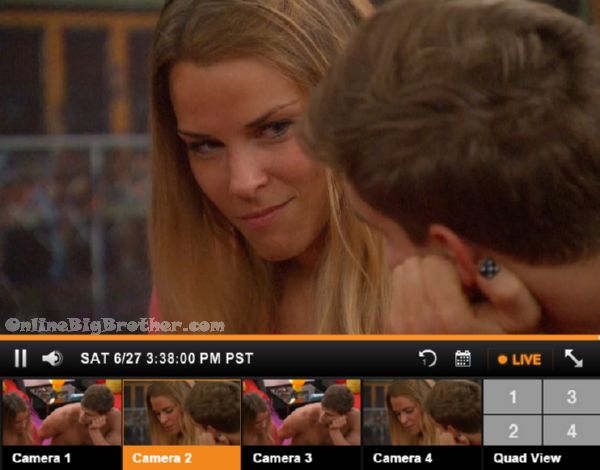 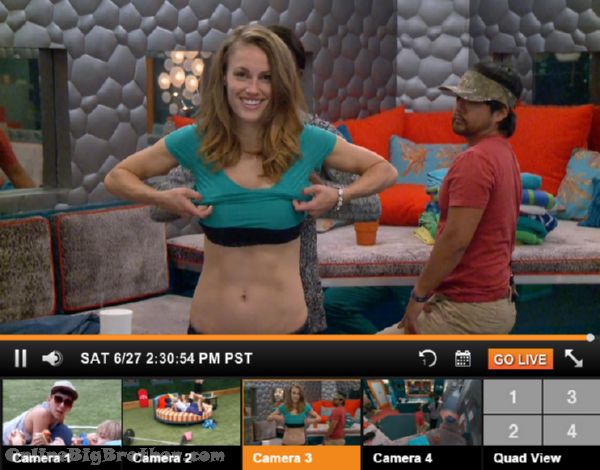 James saying he got into hunting by hanging out with his “redneck buddies”
James father was in the air force
Jace talks about his father who was in the special forces he met his mom in egypt while he was on a secret mission
James says his father worked on plane rader, James was in the air force as well was a combat engineer and fuel specialist.
Combat engineer that was the cool side we got to blow sh1t up..
Jace – did you make bombs
James – we didn’t make them we had c4, claymore mines, m16’s, 50 cal
James about a 50 Cal “You chop trees down with those things”
Jace – that take down a tank
James – we use Mach 19’s .. it fires incendiary grenades.. it’s really quiet too .. we practice shooting at tanks
James was in service for 6 years active 2 years inactive.
Jace asks what would happen if the country went to war and the president called a draft. “I know NAM caused such a up roar and a lot of people were pissed and a lot of people were avoiding the draft”
Jace says he can’t wait to play for head of household “I wanna Play” says that OTEV is his type of competition.
Becky has joined them tells him OTEV isn’t until later in the season.
Jace – you miss your daughter
James – ya..
Jace – how often do you see her
James – I see her a lot on skype and stuff… right now We’re coparenting.. she shows me her chapstick collection
JAce – feel like you’re a d dad bro 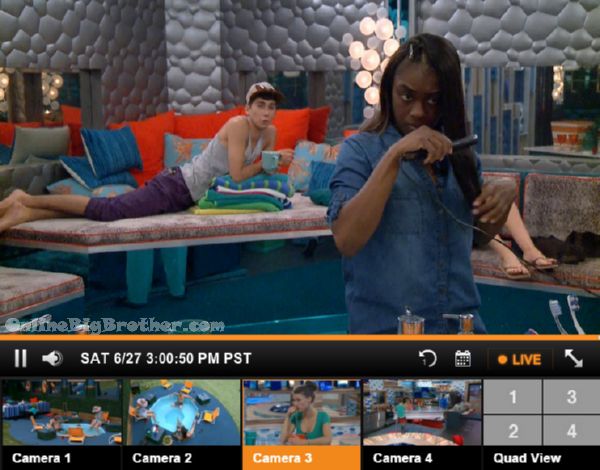 2:54pm Bathroom
Jason talking about BBCAN1 when Alec when his Pen1s was exposed on the feeds after Tom open the shower door. Jason thinks it wouldn’t have even been on the show if it wasn’t for Alec crying so much. They start talking about BBCAn1 and Topaz mixing up her final vote… 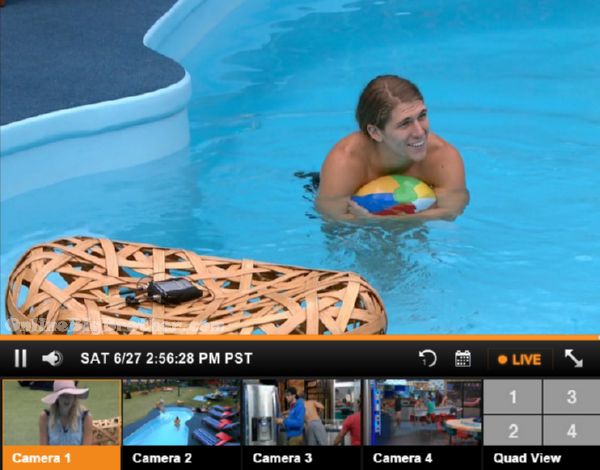 Jace is wondering if he has the votes against Jackie, Austin thinks they do. 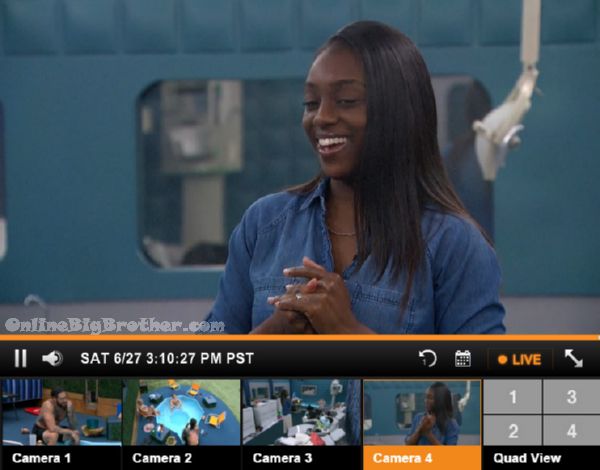 3:06pm DA and Vanessa
Vanessa says DA is not on her radar. Says it would be nice to have each others back because they will be targets. Da says she won’t nominate her.
DA appreciates Vanessa talking to her when she’s missing her daughter.
Vanessa brings up her time growing up in france. Mentions how they are much stricter there. She got in trouble and the teacher dragged her into the courtyard tied her shoelaces together and made her stand there. .. Feed cut.. 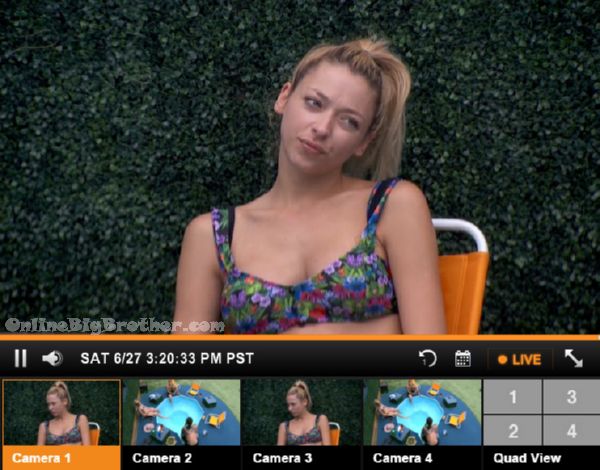 Complaining about people and their tattoos
Austin says people always come up to him and asks him what his tattoos mean. “It’s art for art’s sake” He’s pissed when people come up to him and tell him about the tattoos they plan on getting. Says why should he care the tattoos you are getting
Jace doesn’t think much of Fearless tattoos.. “you’re not fearless”
Jace says a girl in his high school got Fearless tattooed over her “Puss”
Jace – “that girl took more d!ck that year than everyone in the entire school”
Liz says getting a tattoo takes a lot of thought because it permanent.
Austin recommends she doesn’t get one on the lower back

3:34pm Shelli and Clay
Shelli is crying she’s having a hard time in the game, it’s much harder than she thought. She’s not a fake person she doesn’t want to be fake. Shelli doesn’t want to send Jace out of the door. Some people in the house haven’t been kind to her she wants to evcit them not Jace.
Shelli – “He’s somebody I want around.
Shelli says she’s only close to Audrey, Clay and and Vanessa. If they weren’t in the house she’s wouldn’t know who she would connect with.
Clay comforts her Tells her she’s a tough girl she can get through this.
Shelli – thanks for letting me be a girl
Clay – you’re hot
Shelli – I know.. I feel better now
Clay – lets get to that point.. it’s week to week obviously
Shelli – It’s so rough in here you can’t even keep your nails pretty
Shelli mentions Audrey being worried about getting put up on the block this week “The whole thing turning around”
Clay doesn’t see that happening.
Clay’s main target it DA they have to concentrate on getting her out these next 2 weeks.
Shelli asks what is going on with James, “Audrey doesn’t trust him either”
Clay says JAmes is with DA he doesn’t trust James.
Clay tells her to not cry “Just don’t do that again” 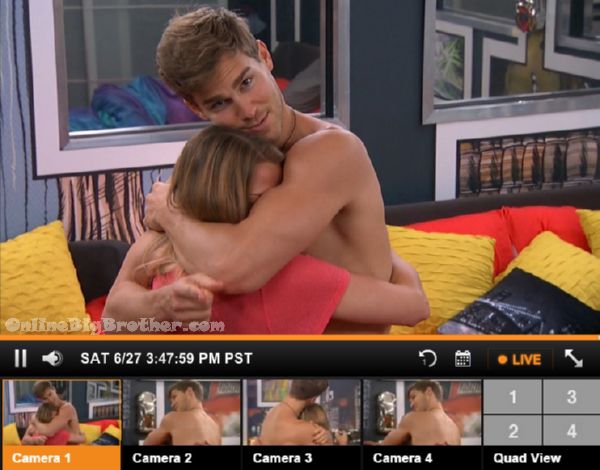 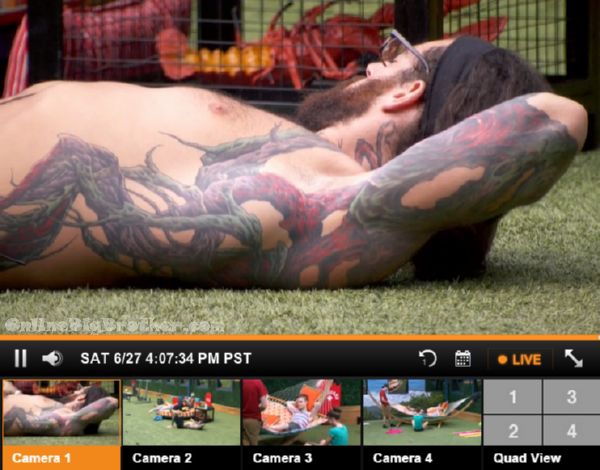 4:08pm Austin, Vanessa, Clay and Shelli outside
Austin talking about his tattoos. “I like the dichotomy of full and not” adds a lot of emotion is involved in his tattoos “It comes from an emotional place” 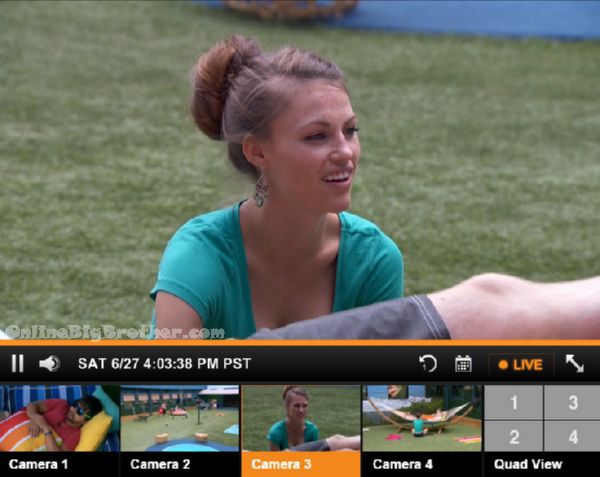 4:00pm Hammock, Becky, Jason, meg and Steve
Becky talking about all her pets. Mentions she use to keep Salamanders.

Johnny Mac + Steve for the win!!

I wish we had subtitles when Clay speaks.

Jace is such a tool! I am glad he will be the first one evicted and forgotten.

Is it just me or is John invisible where the hell is that guy?

I’m confused why is Clay so adamant on getting DaVono out..I really don’t see it. And do Da, Shell and Audrey still have an alliance??

No they dont have an alliance anymore im assuming. And i honestly dont get why clay is targetting ger. Maybe racist. But is anyone else sad that davonne is public enemy number 1 next week?

Why does everyone dislike Jace so much? I’ve read most of what you’ve posted, but I can’t figure it out. Is he a jerk on the feeds? Did he do something that made everyone mad? Or is he like Jesse and just rubs people the wrong way for some reason? It sounds like something has been happening before the feeds were on, but from what you’re writing I can’t quite get it. Plus this is a big cast, but it seems obvious who production wants to get a little further, I mean where are Johnnie, Steve, and Meg all this time?

Jessie is misunderstood during her season, a lot of catty girls that needed a lot of attention and bitches around as a hobby. She also became the scapegoat even though for the most she was ‘innocent’. Day resembles more of Jessie in terms of game position and Steve in terms of personality.
Jace on the other hand is just annoying, he acts like he is the best at everything and is in control when apparently he is being played by almost all of the house. Not to mention he has intimidated Steve who is slowly becoming the Donny of the season. Also from what they’ve been saying on Day 1 of the feeds, he made some error of making several alliances to different set of people (Clay, Audrey, James) that are already aligned with each other and compared notes against him.

Johnny appears here and there on the feeds. Steve and Meg have been featured on the feeds quite a bit.

the impression I got from him wasn’t a good one. he’s been trying to play the game too hard too fast (kinda like audrey), but more than that, he’s rude. I mean, really- “scaring steve a little bit?” More like bullying imo….

I don’t get the feeds until later in the season usually, but by the end of the first episode on tv I was annoyed with Jace. He is loud, obnoxious, always has to be the center of attention, and was constantly cutting people off. From what I have read he is also cocky- thinking he is a cool kid and talking down to others.

In my opinion he is the loudest most annoying HG ever.

I hope Clay gets out of the spot he is in. He is one of the handful of HGs that I like.

I don’t have the feeds yet so I missed whatever happened with Clay? How did he get in a bad spot? I hope he gets out of it too.

Shelli quityerbitchin’ about your nails. At least you don’t have to make fire or strangle a chicken to survive.

I took Jace in an office pool and now I hope I lose. The guy is sooo too much.
See Ya Jace

Yeah shed those fake tears Shelli, congrats you hug those abs. Next step, cuddle at night. That lady head over heels for Claybar hahaha

There is one every season who say they are here for the game and then end up in a showmance. Only a few of the showmance a have survived outside of Big Brother

It’s very weird, she’s so old and he’s way too young for her. I would feel gross being with someone that young, and I would say the same if the guy was older. Something’s off with Shelli.

My guess is why JohnnyMac is laying low, is because of the TWIN TWIST. Makes sense that if you and your twin are changing out every 3 days, to kind of lay low, so you don’t mess up. A lot easier to just take in information and pass it on to your twin, then to have 100’s of conversations to have to pass on to your twin. If JohnnyMac was having a lot of conversations, then his twin switches out with him, he won’t know the full extent of all of those conversations, and would look very forgetful in future conversations with the other houseguests.

He must’ve recoiled in horror at how complex and dynamic this opening week was and slowly backed away!

Okay, so Austin “hates” it when people ask about his (or discuss their own) tattoos, buuuuuuuuut it’s okeydokey for him to talk nonstop about them? I’m so disappointed in that guy; he’s an ego-saturated tool.

Liz is the one with the twin

I’d like to think most people apply and have a equal chance of making semi finals and finals for Big Brother casting (if producers find them interesting enough), but then I see people like Shelli and Becky in the game. I just feel like they applied to another show that theu didn’t get on and were handed over to be on BB. At most, Shelli will ride on Clay’s coat tails. Becky is aligned with absolutely no one and is going to probably keep going up until she gets knocked out.

I love Clay so much but was super disappointed in him when out of all the attractive girls this season he said he thought Shelli was hot… she is the one who looks like she used to be at a man at some point…. just no