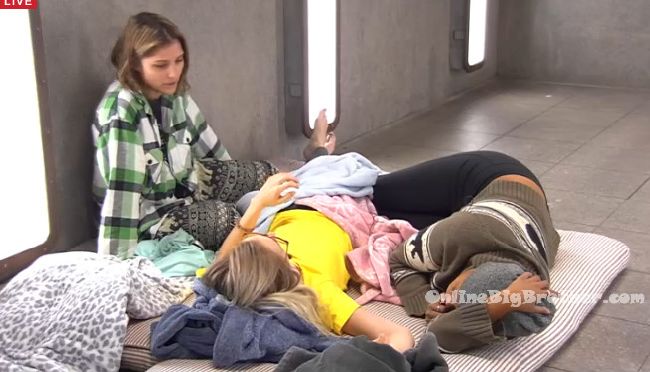 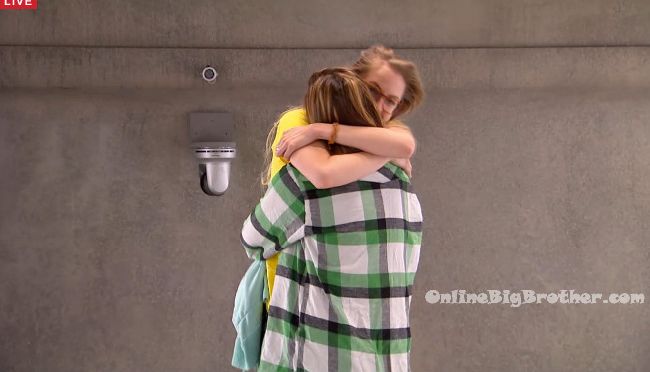 8am Big Brother wakes up the house guests. Zach gets up still wearing his French Maid costume and puts pants and a hoodie on. He then puts the heels on and hobbles out of the havenot room to the kitchen. Sarah tells Willow that before Kevin nominated B he told me this is one of those things where I’ve got a plan and you’ve just got to trust me. Willow whispers and Big Brother tells her to put on her mic. Sarah says I am stressed out about today and I shouldn’t talk to those girls (Pili & Ash). WIllow says I might be one of the smarter girls in the house .. well maybe not. Sarah says when I tell someone to watch out ..I’m looking out for their best interest. I told Ashleigh we need to stay close to Pili because she is closer to Kevin and then she went straight to Pili and told her. I gave Ash too much credit I thought she was a smart strategic player and she’s not. Just like God when he gets any information he gets so excited he goes to tell everyone. Sarah says I love that Big Brother did that to Zach and Kevin and that they’re actually pissed at it. They don’t even know what cleaning is ..like in the bathroom they just took everything, put it on the ground and said clean. Brittnee asks today is the POV ceremony do you think there will be any twists today. Sarah says it would be a double or an instant eviction.. there’s already been a secret veto.

Up in the HOH room – Zach tells Kevin “We don’t have to wear the heels.” Big Brother blocks the feeds. Bruno and Godfrey

Out in the hot tub room – Brittnee tells Godfrey that she’s trying to think about what to say in her speech today.Godfrey says to say you said I was a pawn, prove it by taking me off the block. He says to use his speech from last week. “You put me on the block, I’m coming after you.” Brittnee says that Kevin is obviously using the veto on Bobby. And that secret veto thing its so weird that you would use a veto on someone who has a secret veto? I don’t get it. But he’s obviously not a target for Kevin. Godfrey says I suppose.

In the kitchen – Bruno tells Bobby from what I understand its Godfrey (going up on the block). I think Zach is starting to panic and he might not be coming for us any more. Bruno says they want us to go after each other. Kevin and Zach are bigger threats than Sarah and Willow. Zach and Willow join them.

9:30am – 10am The house guests are making breakfast. Bobby says that slop pass for the rest of the season is so key! Willow says it really is. Zach gets called to the diary room and Big Brother blocks the feeds. When the feeds return – Zach has his heels back on. He motions with his hand to his head like a gun. Big Brother then calls Kevin to the diary room. Kevin comes back with heels. He tells Pili it would actually be pretty sick if I got to do the veto ceremony wearing this. 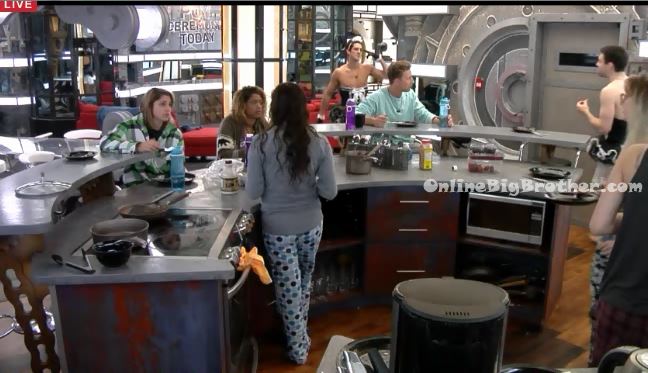 10am Big Brother blocks the feeds.

11:15am The feeds are still blocked for the POV ceremony.

So, what the f!ck is happening with the Veto? Every single person has a different idea as to what’s Kevin doing. But what IS Kevin doing? lol

Kevin’s plan as of last night is to not use the veto. If Bobby doesn’t have a secret veto he gets voted out “that’s what happens to liars” and if he does have a secret veto (which he doesn’t) and uses it then Kevin would then nominate Bruno and try to get him sent home over Brittnee.

Kevin cannot plan for Bobby or Bruno to go home if both of them are not on the block together because Kevin cannot control the votes. Kevin is not even the tie breaker. How can he plan to evict someone if it is not in his hand anymore after the veto ceremony. Kevin underestimates the power of the house like Zach does. Unless Kevin is a bully, he should not expect the house votes as he wishes. Either Britt or Bobby stays this week, Kevin will be on the block if either wins HOH next. Kevin thinks he will be safe next week if Bobby goes. As the time he feels comfortable, he will be on the block. Kevin is delusional if he does not think he is a big target as well like Bobby. Kevin thinks by not putting Godfrey or Sara on the block, they will own him once and will not break up the power couples. If Sara and Godfrey do not break up power couples, what will they suppose to do? Might be Kevin thinks Sara and Godfrey will destroy each other instead.

Now POV ceremony starts. Kevin hasn’t talked to anyone. I believe, the noms stay the same.

I’m so confused by Kevin’s indecisiveness right now…..Is he gonna put up Bruno or not?

This idiotic plan of keeping the noms the same is going to backfire on the DA.
Kevin’s original plan to take Brit down and backdoor Bruno was great, but his dumb, delusional alliance members completely shut that plan down.
Really hope that if Britt somehow ends up getting evicted, Bobby/Bruno win HOH during the triple and put three of the DA on the block.

Interested in what you folks a) who you hope / would like to see; versus b) who you think will be
next HoH
the 3 nominees
POV winner
and 2 evictees

Although, these types of things are Simon and Dawg’s to authorize

Yess Kevin keep the noms the same you clown!

Cannot wait to see this backfire on you and Britnee going home!

You and Pili will be all alone and your ass will be going home in the triple!

I like Britt as a person although she’s kinda catty and seems to have an arrogance and sense of entitlement for some reason. She didnt win the HOH on her own but clearly by the talks Ive heard is counting it as “her” win. But she seriously has no game. Lays around moping instead of building relationships with other hg’s. Bruno has always had her back yet she doesnt foster that relationship – instead she talks against him. She could team up with a few others in there but doesnt want to put any effort into anything. Also something really telling in her gameplay future is how she told Sarah that she can’t do physical comps and that “i dont know any of the comps or task info for mental comps so im counting on you to win for me”. Surely Britt could get off her ass long enough to study with the rest who had been doing so in 3-4 different areas at different times. Hell – she could still lay there studying on her own if she didnt want to join them. There was a study sess going on in the very same bed she lay in and still chose not to include herself. Alliances were studying with their opponents & vice versa so she cant use that excuse for not having a study partner. Sorry but she’s dead weight and I could care less if she does end up being the one evicted.

I agree with what you said and I want to add one point. If you sit on the block with her, you will go home! I would vote her out in a heartbeat if it meant saving someone I could work with. At least you have a fighting chance if you get put on the block against anyone other than Britnee.

I am sorry but the two words “Willow” and “smart” should never be used in the same sentence. Sarah drags her around like a pull-toy, and Godfrey put it right when he said “Man, that girls not all there”. She is extremely insecure, but that in no way excuses her actions thus far in the game. Sarah tries to talk game to her, and right in the middle she goes off on another subject that has no game value at all. Sarah must have a lot of patience to deal with her, and has to bring her back on topic constantly. Sarah has been extremely smart by treating Willow like a “showmance”, thus giving Willow that feeling of security.

I think it’s more than a showmance and I also think, that Sarah gives Willow not the feeling of securitiy, but security. You will see. I like both of them and I think they care for each other a lot.

OMG I know .. its so frustrating .. the people she whispers too can barely hear her … who does she think is going to hear her?! No one else is in the room.

BB should bring her into DR and have her watch some of her stealth whispering. And they should explain the challenge it is to feature her on the show since they can’t capture her.

if Bobby and Brittanee stay on the block what are the chances of Zach and Ashleigh voting against their diaper allies and keeping Bobby. imo, its actually fair odds.
(it’s too early and they’re (bobby/Bruno) too loyal and they’ll appreciate us and won’t target us being the logic).

It looks like Kevin might keep the nominations the same, and I am so disappointed. The houseguests should really stop getting our hopes up. They shouldn’t dangle the possibility of a big game move and then just snatch it away. I do not believe in nominating someone just so he or she can be a pawn. If you win HOH, you should nominate two strong players. If the veto is used, another strong player goes up on the block. If you do this, your HOH is not wasted. A strong player WILL go home. Kevin should use the veto to save Brittnee, and replace her with Zach or Bruno. How does Kevin not realize that Bobby might actually have the votes to stay in the house?

Zach and Ashleigh won’t cross Kevin and Pilar.
Bobby also told them that he’d use his fake veto for any of them if need be, so the fact he never had it is a pretty big lie. Not exactly a “we’re allies, so you should save me!” situation.

OF COURSE it was stupid to even think the Blond of the BB house (a.k.a. Assleigh) wouldn’t run and tell to Zach and Bruno everything she was told by Sarah! Assleigh is pits!