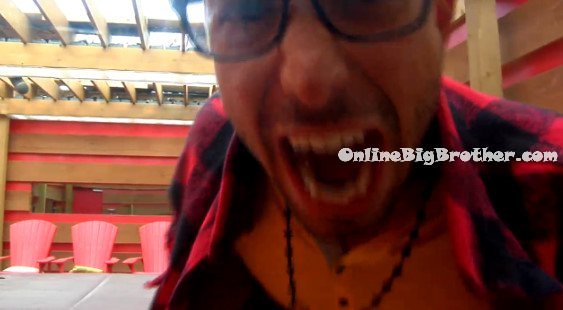 The House Guests each took a punishment to see their loved ones yesterday: 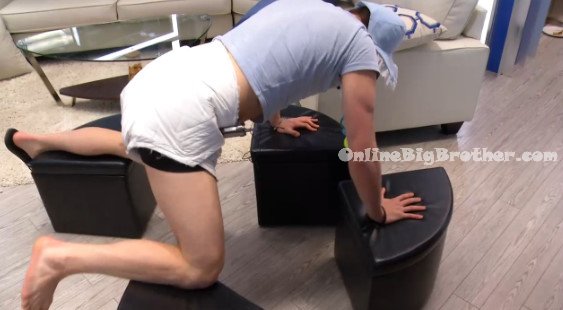 4pm In the HOH room – Jon took down his fort. He then rolled around on the furniture trying to not touch the ground. Jon is beyond bored.

Meanwhile – Neda, Heather, Adel and Sabrina are in the bedroom talking about past events of the season. They talk about how disgusting Andrew was because he would burp and fart around them all the time. Neda and Heather say they both used to tell him he’s disgusting all the time. Heather and Adel leave the bedroom. Sabrina says she won’t leave us alone. When I ask if you want to come out side.. come! Neda says okay. Sabrina starts talking about jury votes and who she thinks they will vote for. Sabrina wonders if Neda will take Jon to the final two. Neda says that she isn’t decided yet. Neda says I just want to be able to talk for awhile but its so hard.. now that there are less people in the house its so hard! Sabrina says that everyone has a better chance of winning against me. Adel would probably have Canada’s vote too. Heather joins them and the conversation ends. Adel joins them.

Sabrina says we’re like oil and water. Adel says you wish!! Sabrina laughs and says he doesn’t understand .. oil and water don’t mix! Sabrina leaves. Neda comments on how she thinks this weeks HOH will be endurance. She says if we keep Sabrina and she magically makes it to the final 3 I’m worried because she’s so good at memory comps. Neda tells Heather that Sabrina is the worst campaigner ever! Don’t tell us how good you are at days! Neda asks Adel if he would have accepted the video chat with his friend again. Adel says oh don’t make me answer that. Heather asks why? Adel says he wouldn’t take the punishment again to talk to his friend. Heather says that’s mean. Adel says well its different you got to talk to the love of your life and she got to talk to her sister. 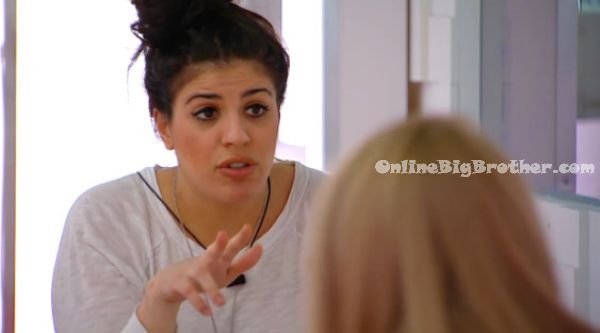 5pm – 5:25pm Adel heads out to the hot tub room. He screams at the camera “AAAGGHHH!!! How am I going to stay up for 36 hours!!! He looks up and says I’ve got to break out! I gotta get out of here! He finds the left over cigar and starts smoking it. Adel tells Canada to stay up all night with him. He says send me a message inside the house to tell me what to do tonight. He says if you what me to annoy someone then let know and I’ll do it. Sabrina joins him and they start arguing. Sabrina tells him that Rachelle put that cigar out in puke. Adel blows smoke in her face. She tells him not to blow smoke in her face. Neda joins them. Adel leaves. Sabrina and Neda talk game. Sabrina tells Neda that if it comes down to me you and Heather and I get to choose.. I would choose you because you deserve to win the most. Heather joins them. Sabrina asks them if they are going to keep her. They both say they’re leaning towards keeping her. Neda says unless something changes.

5:40pm Adel is out by the pool carving Neda’s face into a watermelon. When he finishes he heads insides and asks if they can guess who it is. Adel tells Neda that its her. Neda says it doesn’t look like me at all! Neda grabs it and show the camera … she asks does this look like me?!!? Neda then starts saying Hex you! Hex you! 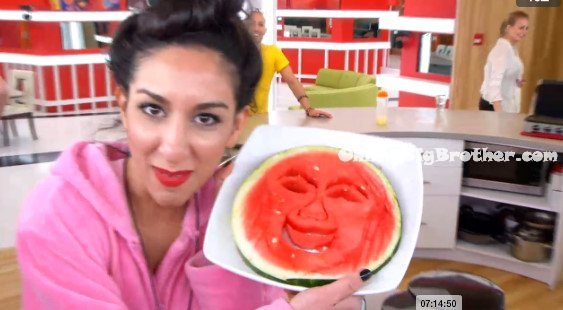 6:10pm Heather, Neda, Sabrina and Adel are hanging out in the kitchen.

HELP keep the spoilers coming.. Show your support by making a donation. ANY amount is greatly appreciated! Simon and I work 24/7 all season long to keep you updated on everything that happens inside the Big Brother house. Your donations go directly to paying the fees required to run this site.

I hate all of these houseguest if they keep Sabrina in this house for one more week!

I really like this final 5, I feel like watching a dysfunctional family xD this is better than last year’s F5 and definitely better than BB15 final 5

I think Jon is losing it.

He lost it when he decided to take out adel instead of neda. Good on ya

Well that’s what happens when you’re trapped in a house with Sabrina for 2 months.

UGHHHH I hope Sabrina leaves. I have no idea how she is still in this game! Everyone is so dumb for keeping her. They think oh she’s weak and they can beat her when in reality she is just getting by by acting all weak. two people in the finals should be people who deserve and worked for it. Heather and Adel final two all the way!

You girls are a joke. I do not like ANDREW, but you think he was disgusting because he burped and farted in front of you. HELLO!!! What about JON? He burps, farts and gropes himself constantly along with the nose picking. What a bunch of losers. And now SABRINA is bad mouthing him too. I thought he was her soulmate.

Adel sealed his own fate by not securing with heather and taking Jeda out with her, he would be in a more secure position if he had got her vote and had Jon cast the deciding vote. Neda is deserves to win for maintaining her spot as the safest house guest through the majority of the show, whilst still exposing her strength both socially and in competitions.

Adel is smart though
Reply to  TeamNeda

Adel’s strategy could work if Jon did a right decision. but on the other hand, Adel underestimated Jon’s feeling to Neda. That is sucks. I think he should talk to Heather more and get Heather works with him in this game, but as Jon is HOH, I don’t see how heather can help him to stay.

Ok…. Just lost a bit of respect for Adel. He just said he wouldn’t want to travel to some places in Canada unless they paid him. How could you NOT want to travel across Canada to visit the fans, if you had the means to do it?

Would you travel to compton, detroit, or any other U.S. Ghettoes free of will?

If they keep Adel, he will win the next HOH
And he will put up the girl. There best bet IS
To keep sabrina.

I don’t understand why everyone hates sabrina
So much? She is just a typical Italian that uses a
Lot of expression and emotion to display her emotions.
I mean deep down she does seem like a real
Loyal person if given the chance. She does have a big
Mouth at times but so does everyone else but she
Only gets backlashed for lying and being dramatic.

Jon May have the same dirty manners as Andrew
Did but there is a difference. Jon is more like an indisciplined child
Where as Andrew looked more like a dirty old man lol

Adel is a typical MAN that would rule his home
And rule his woman if she spoke out of turn.

Neda is a fuckin spoiled brat that walks around
Like she is a witch with her big nose casting
Spells all day long. She is boring and doesn’t
Know how to have any fun. I hate watching the show
Because of her. If you go against neda, watch out
People!!! If she gets Evicted, I’m happy!

And what about Annet?? You’ve forgotten to add how do you see/judge yourself !

Why does everyone want Sabrina to be in final two all of a sudden?! Have people forgotten that he hasn’t done anything to deserve that 20 grand

Very true “delta” — Its all good for Jon to do this but not Andrew! Sabrina is just agreeing with them on purpose—but Heather has a crush on Jon and Neda is really head over heels in love with Jon! (she just can’t show it as she knows that he ‘loves?’ his girlfriend! –i guarantee ya if he didn’t this would have been a big showmance—but a lot more discrete than Emmetts/Julians! I think Jon has issues lol to put it lightly — I don’t want him to win as he is wimpy and such an attention seeker! (just my opinion-sorry Jon/Neda fans!
I really am unsure who I want to win now—as Adel has lost some of my respect lately too—but was all for him before!
Something has to happen very soon! (hopefully) to make me want/care to see a winner! So far as much as I hated Sabrina—she is still playing the game and surviving!

In reference to “name”, this site is to comment
On the players in the house and that is what
We are all doing. No one here is going to judge
Ourselves so next time write something that
Is worth reading.

I don’t think Jon has a crush on neda, I think
He’s really good at being social and faking
A lot of his behaviour. Him being a goofball will
Get him out of trouble.

Commentyes exactly! But you can only comment on their gameplay not their looks !! A NNETTE please go read your comment again lol no wonder you are sabs fan .

Next time please post a picture of you so We can judge too :)

I totally agree with what Annette said. Every word. Jon and Sabrina final 2.

Wouldn’t it be pretty cool if during the finale
Of the show, they made slop cookies for the
Audience members to taste? Lol along with
Maple syrup of course!

Heather is gangstaaaa!!! Shes a warrior & she literally cheated death & took herself off death row!! She creeped up on everyone as she played the blonde dumb to catch the wise & it worked (even arlie failed at that) So she ensured her spot in the final 4 hands downnnn…If she wins hoh & shes stronggg so it could happen she’ll be in the final 2 for sure…Adel can’t pray his way out of this one so he’s gone & i’ts still anyones game pretty muchh…Heather’s got hidden talents & serious Game & she is Currently Canada’s Favorite houseguest….This game is soo rollercoaster-like cuz its funny weeks ago Heather was labled the weakest link & now she’s the Woman on top….

Everyone still standing did something right & i give the ginal 5 all props!! Sabrina had game its just not the typical kind…she did win ppl overvw her kind heart she hustled all game went on the block like 5-6 times & is still in the Game…If thst’s not survival i dont know wat is. Yeah she’s a # & has been used to get ppl out but her role right there coukd lead her to the win. Imagine if she’s really athletic & goid at stuff in real life but just played the weakest link to stay in the game long cuz she’s a ‘super fan’

Sabrina for the win !

That’s so funny that Adel predicted that Jon would be on some type of roller thing in the hoh and then look at the first photo, he’s doing it!