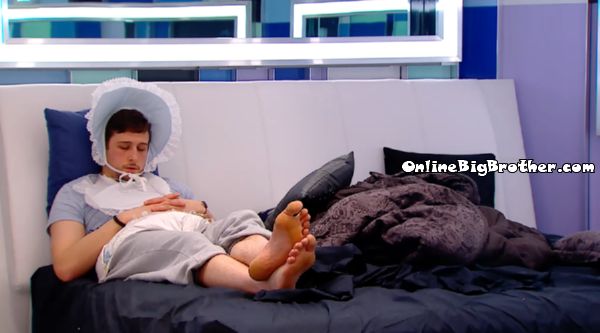 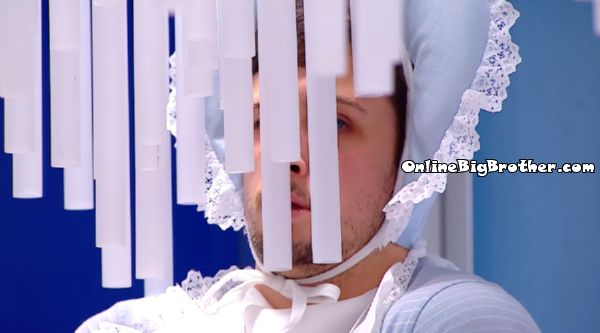 Adel – “I’m bored”
Neda tells them about the Vancouver riots when the canucks never won the cup.
Feeds are cut for 20 minutes when they come back they are playing hide and seek. Jon is “Hiding” behind the HOH lighting fixture Neda is “trying” to find him. (Image above)

Jon says he would “EGG” people actually throw eggs on them.

Neda points out hey only get one carton of eggs a week it would be a waste of eggs.

Adel about the HOH Lockdown “What sense does this make.. “
NEda says they are working on something in the house.

They start calling Heather “Barbells” (She has n1pple piercings)

Adel says he would love some mcdonalds right now. Sabrina tells him if he self evicts he can get it within a hour.
Neda says after you self evict you have to wait 24 hours before they let you out.
Adel says he almost did self evict, “1 Hundo” the time was after the movie when Sabrina acted like he killed her.
Adel – “I was like this girl is way too much for me such a f*** weirdo”
Sabrina – “I’m too much for you.. you were calling me a f*** cow and mooing every time I walked by you.. all I did was sit at the counter and cry.. DON’T INVENT STORIES”
Adel asks Neda if she had 4 nipples she would tell people
Neda says of course that is cool
Adel – “what if you can squirt milk out of them”
Neda – “I would show people”

Adel – “I don’t know how guys are not sh1t tard tired from last night”
Everyone says they are tired.

Jon says no one is watching this right now.
Adel wonders if they are showing this on the live feeds right now.
Jon say not a chance, “no one will ever watch Live feeds ever again.. look at us”
Sabrina doesn’t think this is on the feeds. 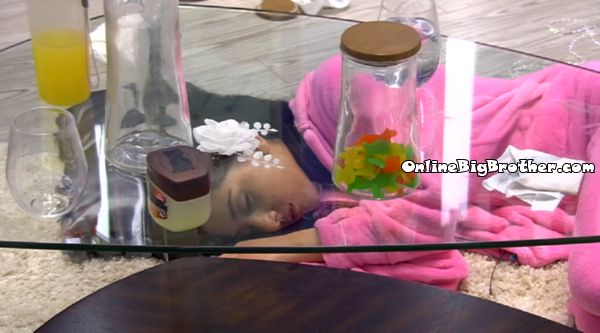 7:38pm Houseguests were all sleeping then the feeds went to Hush Hush 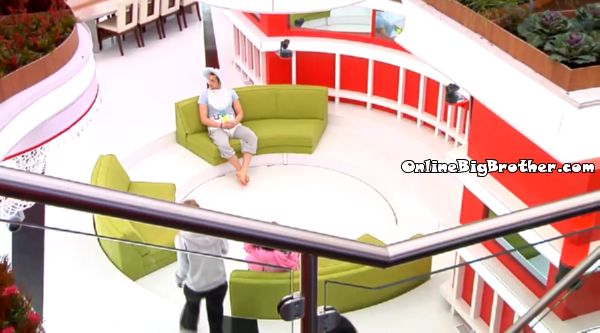 10:09pm Feeds back everyone in the HOH except for Adel.

Jon hiding from Neda reminded me of Lennie from of Mice and Men. I know it’s all in good fun but he’s such a big dummy. Wake up Jon and put your girlfriend on the bloke.

Interesting comparison Sass with Of Mice and Men. If Jon = Lennie does Neda = George? If this is the case then Jon’s game rests in Neda’s hands and it is over for him. And I doubt it will be painless or happy for him.

The Babies sense the evil in Neda

Neda is evil. Not a fan of her at all! Go Heather!!

Hey I just wanted to apologize for the rant I made earlier about breaking Heathers knees sorry bout that, I really like heather just a bummer she’s still staying for another week.

You should have just said, you’ll go all jihad on her ass. (just a joke, i’m not islamaphobic)

I could tell you were joking. But people can’t always tell when it’s just words on a screen.

Too bad Adel will be leaving in her place. Not really, he’s only played a fraction of the game Heather has. He’s played a better game than Sabrina though and it’s a shame they’ll keep her over Adel.

I just want Sabrina out this week. Please.

By this point, I really wouldn’t mind if either of the 5 win. Except Sabrina. If she wins votes from the jury out of spite, I’ll be pretty furious with this season.

You cried, deceived, fought, laughed, manipulated, shared, made friends/enemies, etc, that’s how you play the game of Big Brother despite your not winning HOH yet, Go Sabrina !

I hope Heather wins HOH and takes Jon or Neda out, Neda really needs to go

The fact that Heather is leading this poll baffles me.

A truth and an absolute truth. The last 2 BBADs have been beyond terrible! Today has been like watching paint dry but way more boring. No ones talking game and everyone is hanging together. Wonder who that benefits? :P Production should of just let them get 8 hours rest after the all nighter. The result of 5 hours sleep is 5 turds floating and no one has the energy to flush!!! I know this it will take me about 1 minute to delete BBAD by the look of this day. Barring the ridiculous Adel goes up tomorrow…. oh god we get 3 plus more days of this. Next Sunday the feeds likely end and we are out of our misery.

Neda looks way good atm and I think Adel survives but needs Heather to stay loyal to force Joneda’s hand to keep him over Sabby.

On the couch thing and the dining table. The table isn’t the focus in the house so unlike BB USA where they make/replace it with smaller ones the focus on the kitchen counter here I guess production said the heck with it. Speaking of which they don’t miss a trick. 5 sectionals and 5 HGs laying around we now have 3 sections. :P Gotta get bored sitting up I guess?

Seeing tonight’s nominations episode really turned me off Heather even more. What a whiner, it isn’t like there are that many to choose from to put on the block, it isn’t going to be Neda and Jon rightly said that Adel went up as the pawn last time. It isn’t fair for Adel to go up again this time too, if she wasn’t such a bad sport about it, she wouldn’t have solidified the groups desire to evict her this week.

Sure she won the POV, but that attitude alone would have removed all doubt from their minds as to whether they were doing the right thing. If she hadn’t acted so poorly, i bet even Neda would have felt badly about it, maybe even to the point of second thoughts. i will be interested to see what the actual POV comp was, and what those losers did to lose such an important POV, when they should have been playing to win. ;)

god neda is one lazy girl.. wont even wash dishes……

Yeah I’d be losing my shit if I was in there. She’s ungrateful too. She’s always like “Adel what’s for dinner? No I don’t like that… I don’t like that either….” Seriously one of the most spoiled brats I’ve seen in this game.

I’m glad Heather got POV! I think she really has to win out now though to make it to final 2. Good news for her is that Jon can’t compete this week, so she needs to win and take him out so the road to final 2 will be a little easier for her.

I’m getting tired of not hearing much gameplay seen on the show. Twice tonight is all I saw and was about 30 seconds of 2 HG’s talking. Seems like everything shown is geared to the HG entertainment. Yep I know ratings and all but come on, show some more strategy. On a different train of though…rumour has it that the wrap party is being held in Niagara Falls. Anyone know if it’s true? Would love to find out because I just so happen to live there :)

Watched Toronto Raptors win tonight over the Nets. Missed the Sunday night show.
Came online to see whats going on the the house and I can’t believe its nothing. I can safely say since Arlie left so did the season.
Can’t wait for BB 16.

I stopped watching BBUS when they decided to bring Rachel Riley back. BBCan started shortly after that and for all the bad game and deplorable personal habits, at least I understand these people. They’re Canucks like me.

Is it possible a member of the jury will re-enter the house? What do you think? Which houseguest would you like to see back in the game?

Hey Soil I totally agree that since Arlie left the game took a nose dive. Not only was he entertaining, but he was omni-focused on strategy. Further he never trash talked, he always qualified a remark by saying he was referring to a houseguest in terms of the game.
He is the kind of player that we rarely see, and frankly I wanted to watch because of him.

go ahead tell her what she suspected,,,,, if sabrina tells heather the plan this week im sure heather will believe her,,, sabrina tell her already i know youre dying to tell her….. the 3 stooges again interupts sabrina and heather …..

Sabrina can’t tell Heather before the POV ceremony. And she has opened the door to have Heather curious in listening to her. Sabrina still has game to play.
If Sabrina is voted out, then she has no ties to Joneda and can reveal her F3 with Joneda to Heather.

I rather enjoyed the feeds tonight. Adel was doing some major game talk with Jon. Sabrina is dying to talk more to Heather. She is more careful now than she was earlier in the game. I think Sabrina would love to send Neda packing. Sabrina is going to stir the pot tomorrow. Maybe Adel Heather and Sabs can get Jon to wake up because Canada is watching him and back door Neda.

Heather must be wondering why Neda wants Adel out so bad. Even I can see thru it and Heather is a lot smarter than me.