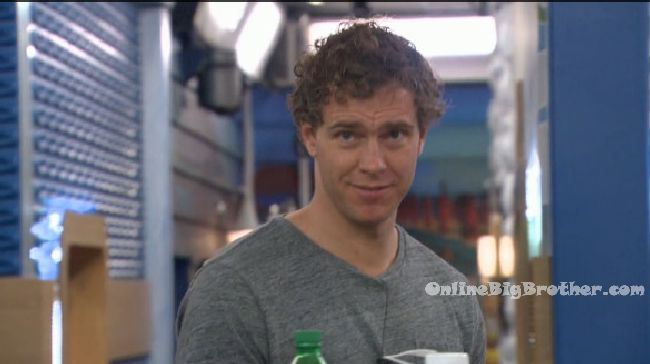 5:30pm – 5:50pm Michelle and Tiffany are in the havenot room. Tiffany says so its Frank. I’m f**king over this! I thought one of you guys were going to get it. DaVonne joins them. Tiffany says F**king Frank. Tiffany says Frank asked did anybody get it on the first try? He wanted to see who his competition was. I can figure it out by the process of elimination. Ain’t no winners in there. James joins them Tiffany asks if he won? James says no. I think Corey got it. DaVonne says that would be good. James asks why would that be good? Michelle says because then he could put up Bronte. James says Frank wouldn’t let him. Frank joins them and says Michelle won it! Michelle says no I didn’t. Frank says I know because I DID!! Frank says Bronte is going up. If she comes down then Natalie goes up. Michelle says I wouldn’t tell Bridgette because .. Frank says I’m not going to tell her. I’m worried she (Tiffany) will tell her (Bridgette) that I was the won who put her up. (For the first Roadkill comp) It doesn’t matter, I can back peddle if she does. Frank leaves. James talks about how Frank can win comps. They ask him what he thinks of Corey? James says he’s a good guy. DaVonne says to get him out you have to backdoor him. Michelle says he could still keep his word to Bronte and put up someone else. James says we need to win that veto. Corey joins them. Corey says damn he is good. I thought I won this one James says he’s a competition beast. They don’t call him Frank the Tank for nothing. 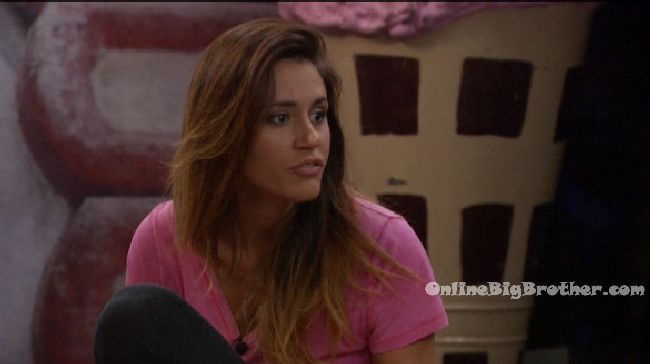 In the bathroom – Corey and Nicole congratulate Frank. Nicole says I’m not going to tell anybody. Corey says I felt like I had a chance but someone had to have gotten it on the first try.

5:50pm Havenot room – Michelle, Paulie and James are talking. Paulie says I’m not going to tell Tiffany because she already thinks he won it and we don’t need her freaking out any more. Corey says I was thinking of having everyone tell Frank .. since he’s already said you, Corey or me are interchangeable to go… having everyone to backdoor me so that maybe he’ll throw that comp. James says he might not want you to go first. He might want me or Corey to go first. James says Frank isn’t going to believe it if it comes from her (Michelle)… it might if it comes from Corey or I. Michelle says I think his plan is to take out all the guys so that he’ll be left with all the girls. Paulie says I think the best way to blindside him is to put up Natalie and Bronte. James says I think its going to be more believable if it comes from me rather than Michelle or Natalie about backdooring you. Paulie says we’ve got 6 days to figure out how we’re going to try and do it. Nicole joins them. Nicole says I can’t believe he told us he won… I think its to gain trust because he upset Bronte. Nicole says Tiffany needs to go .. she’s a ticking time bomb .. she keeps questioning me. 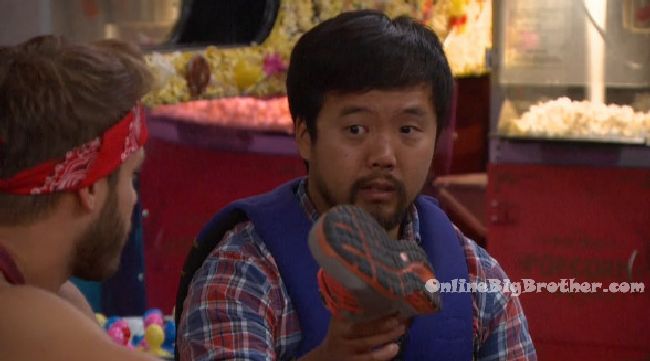 6:15pm – 6:35pm Big Brother blocks the feeds. In the bedroom – Natalie and Bronte are talking. Bronte says if I go home, I want to go home knowing I banded the girls together. To hear the girls are threatened by me is disappointing to me. If its true. 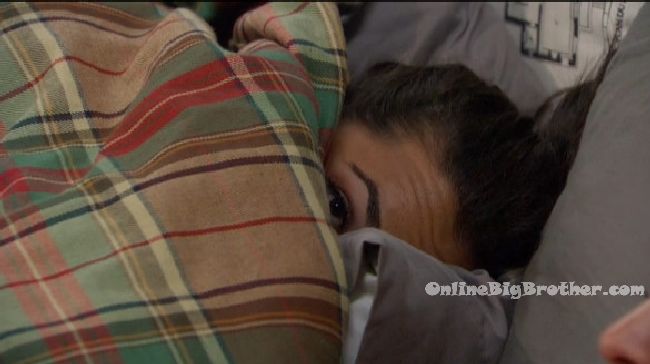 Day has to be one of the worst BB players ever. The girl is bad at comps, her social game is at best average, she can never shut up, she talks game too much with the wrong people and she has no emotional control. Frank dug such a huge hole for himself, unless he is safe because he is HOH or wins veto he will be on the block or be a BD plan. Why in the hell does Day go and tell him after the RK comp that she wants to split up Corey/Nicole? is she not in that alliance? Frank has almost the entire House gunning for him why give him a life vest

I believe Bridgette when she said she got the feeling from the DR people, they wanted Da to win this season.

If Da wins, it is because she got help. Her game is way too transparent and she can’t win comps for sh*t.

Frank and Day have zero chances of winning this game(unless they ended up the F2 then one of them wins). Frank has pissed off too many people, Day’s game is just way too horrible to get her to the end and win. Day has not learned what got her out on week 2 in her season…her mouth !!

I agree with a lot of what you say, but I don’t know why everybody isn’t trying to throw Frank a life vest….He’s a heat magnet and the longer he stays, the more eviction plotting he dominates, which keeps you out of it and in the meantime, ideally he takes people out in your path.

If I’m playing to win this game, I want Frank at the end with me. Nobody would vote for him.

If you want to be next to Frank in the Final 2, you would win. He is turning everybody off

What a waste of an HOH for Bridgette. Frank is totally running the show this week.

Dawg for the win

Why the hell is Frank telling everyone he won Roadkill. He’s such an idiot… So many missed opportunities because he wants everyone to know how much of a beast he is.

He has no clue the vets want him gone. If he did, he wouldn’t hesitate for a second to put one of them up.

If he gets the ticket back in the house, you better believe he will come in guns a blazing. Take out as many people before numbers finally gets him for good.

He has no clue that Paulie wants him out as well..he probably will learn some info by the end of this week, depending who goes home and who is HOH next week. He will 99% be a BD plan, but there are so many loose lips in that House its impossible he wont get wind of it. Dont know if he survives next week but if he does things will flip in that House and he could go much further.

Best strategic game…ass slappin is a strategy, right? I’m working these hos culos like a game of whack-a-mole and putting some stank on it.

Frank is not a nice guy. He won’t be AFP this year for sure.

I was happy to see jozea then victor evicted i couldnt stand either of them.. Weird now i kinda wish they were still around cause most of these players are becoming seriously boring to watch

Nicole to tiff: Come talk to me anytime. I mean it, let me know if you need anything.

Nicole an hour later: omg get tiff out she keeps asking me questions.

Lol stfu Nicole. You’re starting to take over the mean girl title. I really can’t stand her anymore. Whines to no end, clings to guys, freaks out over every little thing then calls everyone else paranoid. I wish Bridgette (or Dora as she’s called by live feeders) would of stuck to her original thought of putting up Nicole and Corey. But Noooooo she had to let frank run her for the week. Ugh!

Of course Frank is going to tell everyone. His braggadocious attitude is part of his character. This guy loves winning and if he can rub that sh*t in your face, he will do it with a cheeky smile.
He is literally the worst.

I think production has rigged this for Frank to win roadkill. The roadkill is so easy to rig because the house guests do the comps alone and there is nobody to witness them. The only ones that see them compete is production.

Next week of course HOH will be Fran or of of his team again.

Of course it is rigged, why else would they not be showing everyone’s time. We just have to take their word as to who the fastest one was. They have always given the times on other comps, so why not this one?

Damn… was so hoping anyone would win the roadkill instead of Frank man I’m so over bridgette hoh(FRANK’s hoh) I wish Paul would’ve won hoh he would’ve put some vets on the block and spice up the house but no production loves the “the messiah 2.0” FRANK .Bridgette did Nothing but listen to Frank . Tiff has to win VETO the veto is her last chance to stay in the house otherwise she’ll be seeing Julie on Thursday and playing in the battle back competition because nobody is going to take her off the block cause they don’t wanna get on frank’s bad side .

Frank’s an idiot for telling everybody he won the road kill. And he’s a bigger idiot if he nominates Bronte this week(he’ll also pi$$ off Bridgette, his only true ally). I have a feeling the house will band together and vote out Bronte and keep Tiffany just to spite Frank. We’ll see!