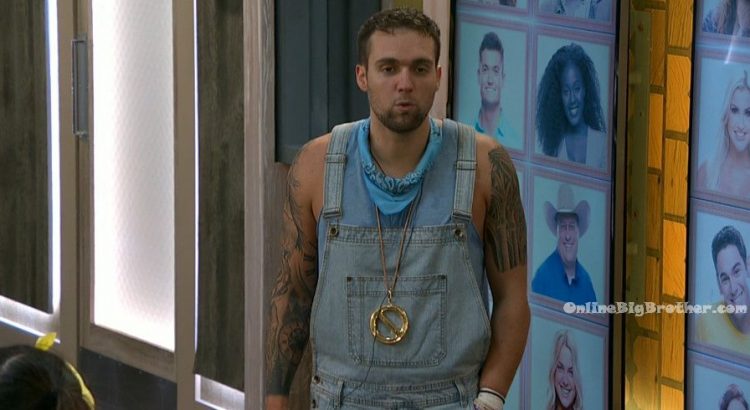 Powers in the game 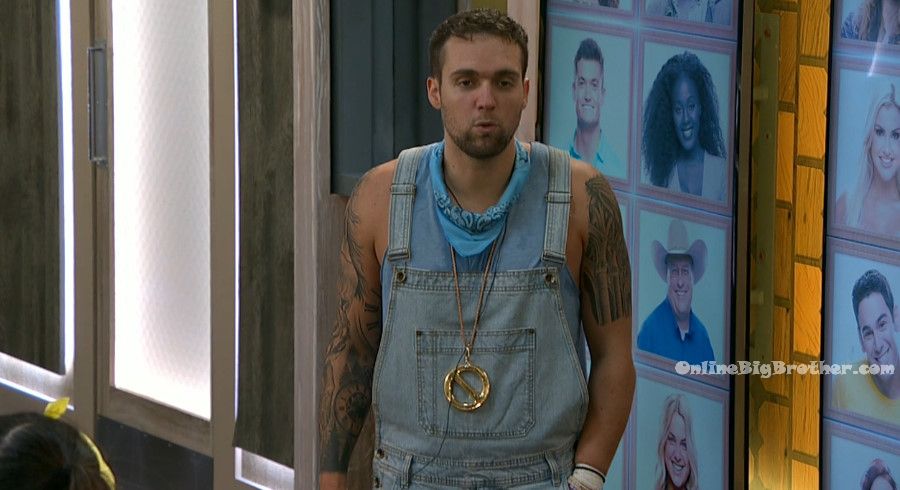 The live feeds return to the house guests all in the kitchen. Jack is in a dress. Nick has the veto around his neck. Nick – If I had gone against Holly in the first round I probably would have lost. Nick – when I had 12 I was tired. Tommy – you did great! Cliff – you figured it out! Is this your first veto win? Nick – yes. Cliff – When you needed it. It kept you in the house. All the house guests comment on how hard the competition was. Nick – I asked for an athletic on and they gave it to me. I told you bro I was going to win. Nick tells Tommy – I am going to win HOH next week. I’m back! I’m my own person again! Its my own game. Week one Nick! I’m not going to f**k it up again.

8:17pm Bedroom. Sis, Tommy and Christie. Sis – I told him (Sam) that if he doesn’t win it, he is going home. That’s why he’s sad. Christie – Nick literally came up to both of us and kissed me so hard… and same as her and said I love you so much. I am going to prove it. Sis – but do we trust him?! Christie – I still don’t but if he wins HOH he has the chance to regain it .. yeah. Tommy – you’re close to him. Sis – you think I am close to him after he told me he was going to put me up on the block? Christie – he came up to you and said he loves you. Sis – Christie. Christie – I know but this is his time to prove it to us. Tommy – everything that he has proved is that he is not good at coming up with schemes and manipulating. He is not as good as we think he is. Christie – and Bella is gone now. Tommy – what you see is what you get. 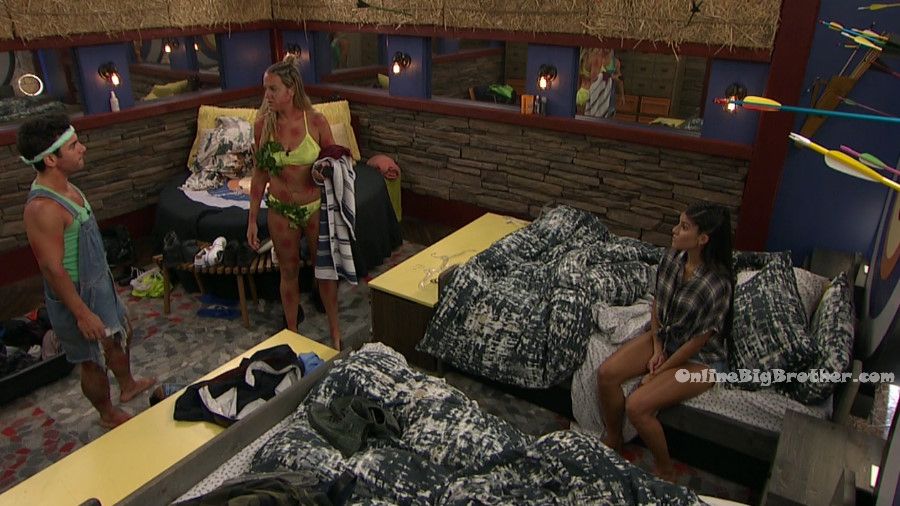 8:25pm Kitchen. Sam – When people started saying slide in my DM’s .. I thought DM’s meant v@gina. Nick – Shut the f**K up! Sam – I thought these girls were full vulgar. They were like so and so slide in my DM’s. I was like WOW! Do you know that’s on facebook?! I’d like it. Nick – its direct message Sam. 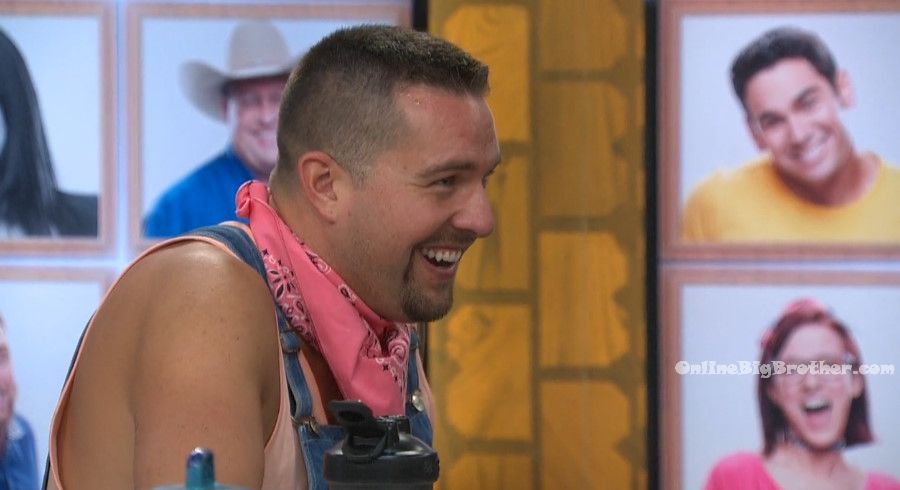 8:25pm – 8:30pm HOH room. Holly and Jackson. Holly – I was thinking about talking to Nick and Sam. Jackson – yeah… that’s what I was going to say .. one, why does Kat want us to backdoor Nicole? Two, I was a big proponent of putting up Nicole from the beginning. I am all for you putting up Nicole but that being said we have got to do some serious leg work with Nick and Sam. Holly – I only want to put Nicole up if she is my target. Jackson – well then send it! We can spin this to where Sam thinks Nicole is the target and Nicole thinks Sam is the target. For your sake. Holly – yeah if I put Nicole up I would probably tell her she is a pawn. If I was going to put up Nicole she would be my target. If I was going to put up a pawn I would probably put up Kat. Jackson – I think Kat will not want to go up (she volunteered to go up as a pawn if the veto was used), which I knew would happen. Her serious game talk is just funny. Holly – I know. I am bummed that Nick won. I was going to sit them both down and say hey .. I went with what the house wanted. Sis joins them. Holly – if I put Nicole up, I am putting her up as my target. Jackson – Nicole is wishy washy, she is unappreciative. She’s dropped a lot of people’s names and honestly the fact that she thought about keeping Bella after everything is mind blowing to me and she is sitting here saying that.. what did she say? Holly – she is saying that he and I .. like the whole plan or idea that Bella proposed to us .. Nicole is definitely going to vote to keep me. Jess is too and so I would just need two more and you guys could be those two. So if you want to go along with the plan just go tell Nicole “Blue Berry pancakes”. Nicole then went and f**king told Jess that he and I were voting to keep Bella. We didn’t even talk to her. Jackson – I told Nicole, if you’re going to vote with us let me know. Sis – at the end of the day its your HOH so you choose whoever would help your game the best. I don’t care if Sam stays, I have a really good relationship with Sam. I would have preferred Nick to go and obviously that can’t happen. So you if you want Nicole out then yeah we can get Nicole out but I don’t know if its going to sit well with other people. Holly – she is sketchy as sh*t but I also do see the point of making a new enemy. Like she is sketchy as sh*t and I don’t trust her but will she ever be in power to worry about that?! Jack joins them. Jack to Sis – who would you put up? Sis – Nicole because I would want Sam to stay. Jack to Holly – would you want Nicole to go and Sam to stay? Holly – I don’t know. I know I can’t trust her but I just put Sam and Nick on the block. Jack – and who has more of a chance of winning HOH. 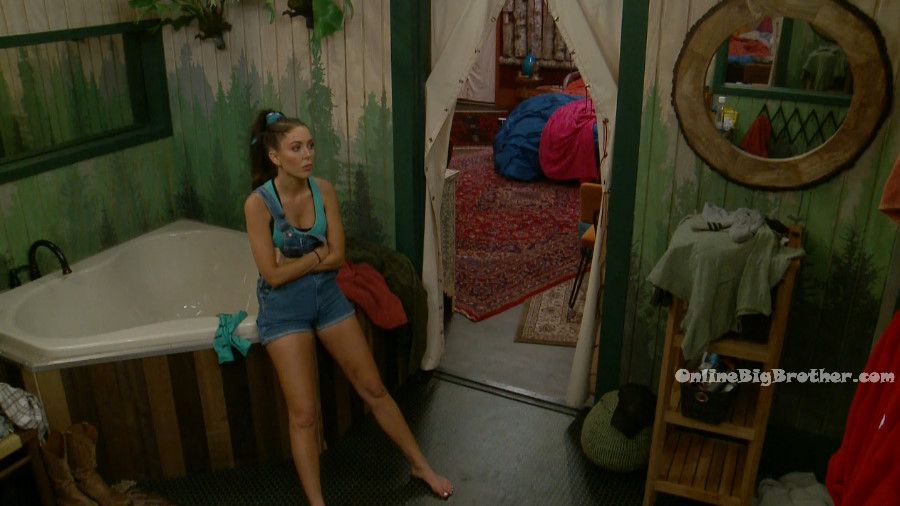 My only is hope is that somehow either Jess or Cliff get nominated, I feel it’ll probably be Nicole though, dang it

I wanted Sam to win! Sam is one of the most decent in the house. Hope he finds a way to save himself!

Damn I wish Sam had won….now if Nick wins HOH next week he’ll put up Jess and one of the other bottom feeders…..nothing good will come from this….goodbye Sam.

had cliff and his wrecking crew actually followed through and got rid of jack or christie this might be interesting.. but of course its not nick merely gets another week of torture sam gets to go home and we all continue watching this train wreck veer off the tracks

Yesssss finally some good news! While i don’t really like anybody in the house that much I’ve always been one to root for the underdogs aka nick and sam lol

Could be the topping point. Get back in good with the Jack’s!

You can trust them off they think they can trust you.

Obviously Veto was not a hot dog eating contest……..

Crusty doesn’t even bother pretending anymore that she doesn’t run Holeys HOH….how weak are these idiots that absolutely no one dares to challenge Crusty’s commandeering of everyone’s noms…..she will win most likely at this point. Cliff is gonna rue the day he didn’t force her to use that Grodner gifted power……it all comes back to Cliff’s coward move….Sam should shit in Cliff’s shoes before he leaves.

Can’t stand her! If she makes it to the end with Tommy. I hope tommy takes the prize

Christine STFU so annoyed by her she goes with power hope people quit being stupid and get her and Jack up and out.

It’s sad that Holly does not have a backbone but what is even worse Kristi Thinks She has a backbone but she still does whatever the boys say like giving them her power when they wanted it….

Christie saying that Nick can only prove his loyalty if he wins HOH. So, he’s in the dog house unless he wins HOH and then she doesn’t want him to put-up the 6-Shooters to prove himself? GTFU with that arrogance!

Holly needs to miraculously grow a brain between now and Monday and realize that teaming-up with Sam/Jack has real potential. Get out someone other than Sam! Anyone other than Sam! He’s our last hope for a semi-entertaining summer.

The way this alliance is I expect nicole to be on the block on this week instead of kat . Hopefully the target won’t shift to her but my thing is why isn’t jess in consideration for being in the block ? She has nothing to offer and is basically the living breathing definition of a coaster.

That’s why they won’t put her up, she has nothing to offer and they’ll drag her to the finals because who would vote for her

Like to be honest, lyyyyyyke, Why put someone up like who like isnt like an inkling of a threat in any like way, like lyyyyike shape or form.
I want to punch myself in the face when she speaks:! Ahhhh her voice with the “like, lyyyyke” f-in KILLS me!! I had hoped she was just acting clueless, NOPE, it’s
Pitiful how unaware she is of the game that’s going on around her.

Nick may have won but Sam is not going anywhere… This season sucks bad and Sam is the only one really entertaining. I know they put Sam & Nick up but I knew one would win veto n the other wld get someone boring enough next to them to get out like Jess/Nicole… I like Nicole but feel like even her trying to lay low wont take her to the end cuz the 6 will always blame her for everything. Big brother always has who they want in jury n lean it one way or another to make that happen. Nick n Sam will def be in jury, as well as tommy & christie & sis and prob jack… micky n holly are questionable as well as cliff but i think cliff has a good shot at going far in the game. These arnt my picks this is how cbs does it… I wish Jess was going this week but there talkin alot abt nicole so we will see…

Sam & Tommy are my two fav’s for wanting to win it all! I’m not sure if it can happen cuz there too likeable and too many hg’s are already saying that but I can still wish!

Tommy? Tommy? He has to be the fakest, a$$ kissing little worm in the house. I definitely don’t want him to win. So far, he’s been about as good as Jess in comps and he plays all sides, everyone, by telling them all just what he thinks they want to hear. Can’t stand him or his dramatic personality!

Isn’t that playing Big Brother though?

Guy From Canada
Reply to  Jem

If Sam leaves this coming Thursday I’m done with this BS. I feel like he deserves it more than any of those liars

Why is Nick not trustworthy? Because he voted to keep Bella?