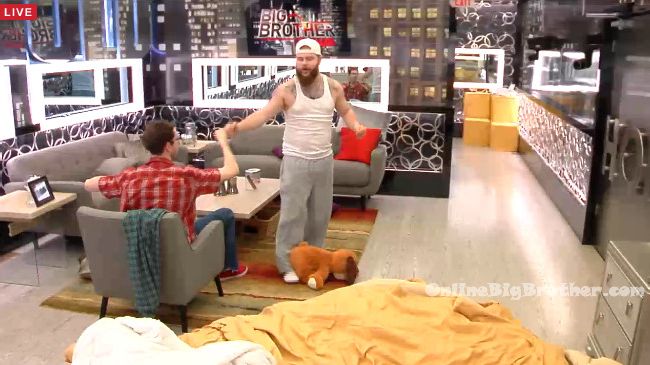 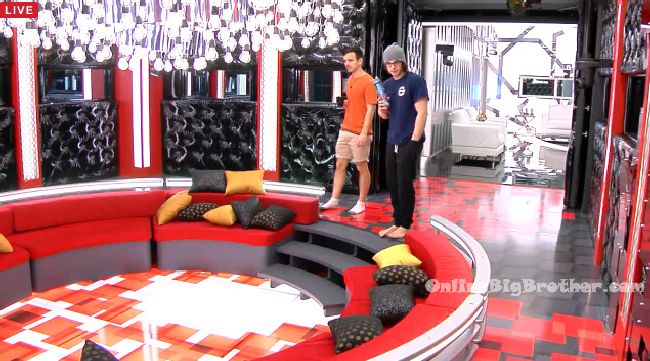 8:30am In the bathroom – Nick asks Kelsey if she set herself up okay in the havenot room. Kelsey says she didn’t really sleep. Kelsey says yesterday wasn’t fun especially with a hangover. Nick says I wouldn’t wish that on anyone.

8:45am In the kitchen – Jared comments to Mitch how the high roller room door is still open. (The room opened up last night and they’ve been able to go in it.) He says he got up during the night to go to the bathroom and it was locked. Mitch asks did you look around in there? Jared and Mitch head into the room. Mitch says when the right time come something will be on there (he points to the tv screen). (Likely when the jackpot lights and sounds go off again who ever gets into the high roller room first will get something) 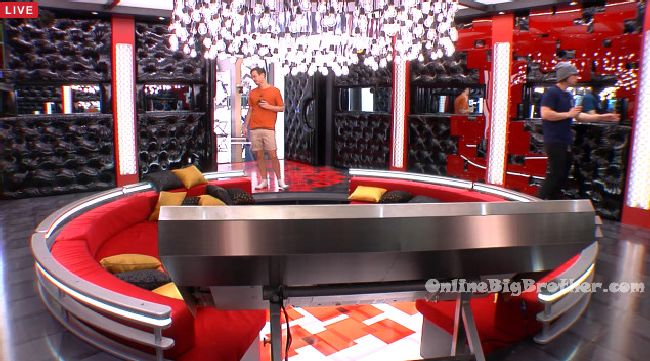 9:05am HOH room – Joel and Cassandra are talking. She tells him to enjoy the this. Joel says I am. Have you talked to Jared and Kelsey since last night? Cassandra says no. Joel says they obviously know one of them is the target. I made my decision and I stick by it.

9am In the bedroom – Rmasey tells Loveita that’s what they do, they make deals and alliances with people. I’m going to speak to her to help salvage your neck in the game. Loveita says this is Joel’s nomination. Not mine. Ramsey says right, he’s a grown a$$ man. He’s now the oldest person in the house. Loveita says Maddy is my concern. Ramsey says I would never let her write your name on the block. She is real. The reason why she is threatened by you is because you were able to make a move to further yourself in the game. Loveita says I stuck my neck out in the game and she back stabbed me. Ramsey says those people will make deals and break them. They won’t stay true to their word. This your week to start building relationships. Loveita says if Kelsey goes and one of the others Jared or Raul win HOH .. only one of them votes. After this week we have the majority of the votes. (Loveita, Ramsey, Maddy, Dallas and Joel) Loveita says I’m going to try and talk to her but she needs to listen and not get aggressive and leave. Maddy joins them. She asks Loveita what her hair looks like without a hat. Loveita says it looks like a rat’s nest. Maddy says you look beautiful. Loveita asks to talk to Maddy alone.

9:40am Big Brother blocks the feeds for the picking of the veto players.

Living room – Jared tells Kelsey we’ll say a church prayer before. We’ve got to win this, Raul is going to fight tooth and nail for it. They comment on how Dallas had such a smug look on his face. 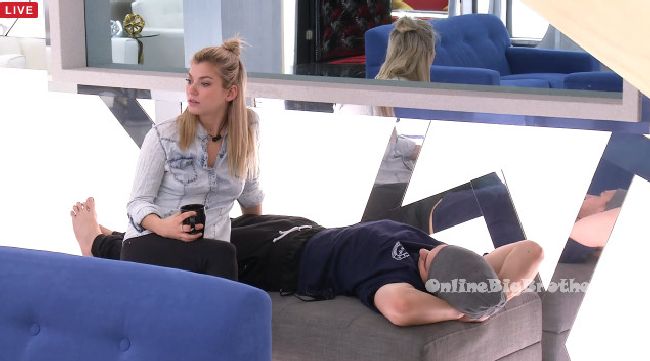 HOH room – Joel tells Dallas that he sees him right up there together in the competitions. You, me and Ramsey need to go hardcore to win this thing. Dallas agrees. Even if Kelsey won the veto it wouldn’t be as bad as Jared winning it and taking Kelsey off. Ramsey’s a beast! Joel says its not the worst pick in the world but him (Jared) being picked is not the best. I think everyone’s on the same page with who needs to go home this week. Joel says Now that he’s picked to play I’m really jacked and want to win. Dallas says we’ll get’er done. We just have to go hard hard hard. Dallas leaves. Mitch joins Joel. Mitch asks if Kelsey or Raul win would you put up Jared? Joel says he would put up Tim. And I have the votes. They are 3 people and if I let them go further they control one quarter of the votes. Joel says I don’t want Jared to win it. Mitch says that’s why Kelsey needs to go. Joel says I told Jared I wouldn’t put him up. Mitch says I think that’s good so that next week you’re not seen as the target and the Jared / Dallas feud continues. Joel says these were my nominations. Mitch says its good that you own it. I think you’re good. The threesome is shocked but you won’t be their target. I think you’re fine. I don’t see them coming after you at all in the many weeks to come. Joel says worst case scenario Jared wins Veto and takes Kelsey off the block. Tim goes up. Mitch says one will go home. (Raul or Kelsey) I hope its Kelsey. Joel says if I have to put Tim up I don’t want to tell Cassandra. I would only tell Tim. Mitch agrees and says Tim should know so he knows what the plan is. Mitch says once Kelsey’s gone I’ll have more influence in Jared and Raul’s decisions. Loveita asks who they want to go? Mitch says for me I want Kelsey to go. Joel says same. Loveita says that’s what she would want. She tells them how Maddy is voting for Kelsey to stay.


10:20am – 10:45am In the Hight Roller room – Phil asks Ramsey if Dallas or Maddy were in power would we (Phil/Nick) be in trouble? Ramsey says I’m going to let Dallas play his game. He put a huge target on his back with what he did with Jared. I see you extremely close with the trio. Phil says Tim is a guy you should look at to work with in the future. He loves the middle ground. It’s not just me and you in the middle ground. Mitch, Tim, Cassandra want to be part of the middle ground. I know who is at the top now. If we play our cards right, they will all fall. And then what’s left will be us.

11:10am Loveita tells Joel that she is having a hard time trusting anyone. Joel comments on how the nominations were his choice. Loveita says because I’m friends with you they’re like oh its her. Joel says because those 3 (Jared, Raul, Kelsey) are super tight I had to try and get one of them out. Loveita says I’m going to talk to them. I don’t think its fair that they put this on me. Why would I put myself out there and fight for them not to be on the block. At this point I could careless. I miss home and want to go home. I’ll stay but I just don’t care. Loveita says that she isn’t sure if she can trust Mitch. He’s just really good in with the Jared squad. Loveita tells Joel she supports whatever he wants to do. I have your back. 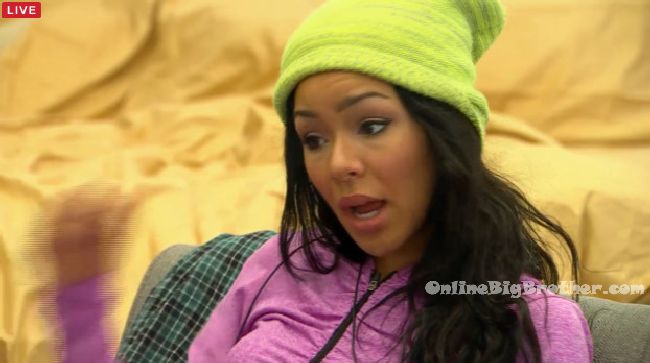 11:20am HOH room – Kelsey comes in to talk to Joel. Kelsey says there are no hard feelings. I think it was a silly move on your part. Jared, Raul and I like you and trust you .. and never would have put you up. Breaking up us there was a ticking time bomb and I get why you had to do it. Maddy hasn’t spoken more than a few words with you which is personal and not game. But there is also another group working together in the other room. (Ramsey, Maddy, Dallas) Joel says it was not an easy decision. I strongly take everything into consideration and whether its the best decision we won’t know till the end. Kelsey says and Jared said that you told him you would not backdoor him. Joel says that will not happen. I reassure you 100%. Kelsey says okay thank you. Kelsey says moving forward I want you to know that we would like to work with you even next week when you’re not HOH. 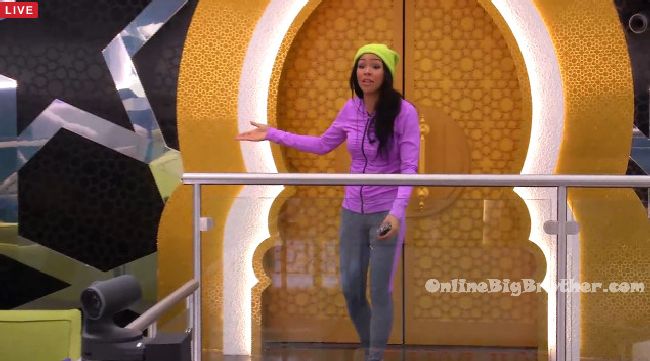 If you don’t mind answering: why are Cassandra and Mitch not have-nots if they were on the losing team? Thank you.

Bob the Builder
Reply to  sistersister

my guess is the winning team got to save 2 people, i wondered because the teams were so large, they wouldn’t normally try to put more than 4 in the Have Not room, so teams of 6 seemed pretty big for the competition.

i just wish they would have more Canada votes this year, it’s always disappointing not to be able to vote for extra Have Not foods because i just don’t agree with the slop only nonsense of the have nots, it kind of leaves the viewers out of the game when there is nothing each week to vote on, the have not extra food was always something to look forward to.

i also prefer a food competition, where the whole house can eat, but they have to win the different foods.

I can’t stand Maddy, she is so fake. When Loveita won her second HOH she was so far up her arse. And now she’s saying she doesn’t play personal and won’t vote out Kelsey, what?

Joel babe, you’re not just a moron, you are an EVIL fool! Say hello to your mamma-moronita!

Is dallas that damn illiterate that he can only use the F word when he can’t think of any other words?? He’s a disgusting, slovenly pig – get him out pleaseeeee!

Lovita saying “you’re my target” to both Kelsey and Cassandra and now “I don’t trust anyone” to everybody will only invite people to distrust her and go after her . By doing these, she signals she is untrustworthy , but she doesn’t see it. Not a smart woman at all…

this ariana grande is a troll…