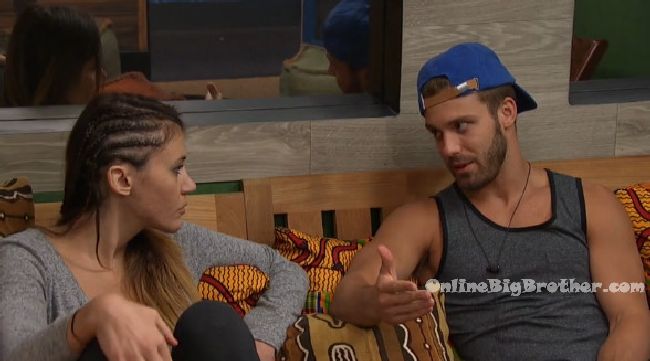 3:50pm Safari room – Tiffany says I really have to put 100% trust in other people. Paulie says I am telling you 100% I am putting him on the block. I’m going to go out and bust my a$$. I’m going to keep you safe as long as I can. You helped me out last week and I’ve got you. Tiffany asks if I was to win … put yourself in my shoes ..what would you do? Paulie says I think at this point you know everyone wants him gone. In this situation he doesn’t even have a chance… we didn’t give him a chance. Tiffany asks should I try and win it? Paulie tells her to go out and try her hardest. Tiffany says because I don’t want to look like an idiot .. where I win it and don’t use it on myself. Not that I would use it on myself. Paulie says after him the eyes are on Bronte and Natalie.. they’re no were near you. Its going to be unanimous. If you have a better relationship with Bronte then take her down. Paulie says at the end of the day F**K AMERICA they’re not in here. They don’t know everyone wants Vic out. Paulie tells Tiffany that after the veto he is going to tell Vic he’s going up/the target. I almost feel bad because of how blindsided he’s going to be. I’m part Italian … you’re still going to feel bad having dinner with a guy before you kill his whole family. You’re second in command to Jozea and as long as you’re here you’re a threat to me. Tiffany says I hope people don’t change. Paulie says it won’t, its unanimous. You can’t say too many thing are 100% but this is unanimous. We flipped everybody from that side and they don’t even know they’re lined up next. Tiffany says Bronte knows. Paulie says that if Paul wins he would put up anybody we say .. same with Bridgette.

Hand of the king

Anonymous
Reply to  Hand of the king

Who cares about polls? You think we should like or dislike someone based on a poll? Foh.

Frank talks to people like they’re a piece of crap. He thinks he’s so much smarter than everyone else, and he’s an arrogant prick. I can’t wait till his old ass is sent packing.

Actually I think quite a few people here do try to fit in and like what’s popular. They crave the validation of Thumbs Up.

The object of the game isn’t to be liked by sheep like you…its to win Big Brother. That means playing many sides, playing people’s emotions, and going beast mode during comps. You know nothing…

Your name is stupid
Reply to  Crooked Hillary Clinton

Why don’t we call it the top 5 or 6 and get Day Paulie and Zak in there. Well, doesn’t really matter anyway, if you ain’t #1 , you just ain’t. Folks talk about James too, he’s numero uno. So whatcha you really got to say. Zero.

Sykes
Reply to  Hand of the king

So what? Like that means you’re “right” or something.

Fancy Berries
Reply to  Hand of the king

I think what Hand is trying to say is how can the majority of the comments be negative towards those two, but the poll on this site, as well as every other site, have them in the top 3 most favorite.
It doesn’t add up.

No, he was clearly lashing out at people going daring to go against popular opinion. He was pointing out the poll as evidence of rightness or something. It was lame.

Lady Mormount
Reply to  Hand of the king

Frank dropped in HG Rankings from #3 to #8 on Jokers which is the US site the HG’s talk about on feeds. He’s just above Michelle, Paul, Bridgette, Victor Bronte…. perhaps because he’s been playing on that side more, divulging his team’s secrets, plans & shouting down & plotting the demise of his own teammates. #1 #2 Nicole & James were recent America’s Favs and telling Paul he wanted to put them, Day & Tiff up in Week 2, nobody with kids to Finals etc. was a big turnoff everywhere. Frank’s turned out to be more like Boogie than fans guessed.

Frank said he wants to play like a combo of Derrick and Mike Boogie. I think he should just be himself. It’s gonna backfire…

jim
Reply to  Hand of the king

These “polls” are arranged to look a certain way? Anyone with an ounce of common sense knows “the system” is rigged to make “ww” more likable and popular because of the pervs in their community! They praise ho’s, so what would you expect?

Zero
Reply to  Hand of the king

How dare anyone go against the sheeple!…

Frank will be evicted this week and we will no longer get to see dufus. Instead, the piercing eyes of psychopath serial killer Corey will continue to haunt us. Corey, hanging around in the closet is not healthy for your psyche!

This can’t happen. Frank’s team is safe from eviction this week.

Watch what you say about AMERICA Pauline! Your being watched by AMERICA & CANADA! We know what’s going down more than you’ll ever know! Clueless brain fart!

He was try to calm down the queen of paranoia. Poor choice of words.

Your Teacher
Reply to  Anonymous

No ned to be offended
Reply to  Anonymous

He s talking about that all knowing part of America that watches BB casually and swallows everything CBS serves them….all those ppl that loved Frankie in BB16 and had no idea why would anyone hate him..coz the show never really showed what we saw.

We don’t know what goes on in the house? Newsflash, you idiot, we have a really good idea, because of the feeds, Simon and Dawg, and BBAD. We see and hear stuff you don’t, so don’t get your panties in a bunch about how hard you have it in the house. And don’t you dare disrespect America. Ever.

That’s why they call him the tank baby!

Umm Paulie, America IS here and IS watching,,That’s kinda why they call it Big Brother

And yes many want Victor out, but keep running your mouth and you won’t be too far behind

we have nothing to do with the vote, so we have no power to get Paulie out, and I agree too many times has America messed up the game when they have been given a say in any part of the game. Let them play, let them decide who or who not to take out. Yes we see a lot of the stuff that goes on, but we have no clue what it is like to live in that freak show.

if I had to always calm Tifanny down , just after experiencing the block for the whole week..I d probably also not think to hard what to say just try anything to finally make her paranoia stop. Also…why so butthurt? half of the house is acting pretty badly and idiotic… i swear if this house is meant o represent america then humanity is fucked coz 60% of those ppl have no idea where they are…

Paulie – acting like that Godfather. Give me a break.

Paulie is acting like the Godfather hahaa Godfather quotes “Never hate your enemies. It affects your judgement ” “I’m going to make them an offer they can’t refuse”

If I was Tiffanessa, I’m not to sure I’d be trusting my safety to them. Some of the most memorable evictions have happened because a veto holder, didn’t use it on themselves. I’m looking at you Marcelle!

Who else has done not used it on themselves? I can only recall Dick using it on Danielle when they were on the block. There have been others?

I believe it happened only three times. Marcellus in bb3, dick used on Danielle bb8, and brendon on Rachel in bb13

Ok. I had forgotten that one.

Well Paulie you just lost me, F**k America, were the ones watching you better think twice before you say Sh*t like that.

If I was in that house I’d be looking at Paulie Paul an Corey… Those are the type of dudes who always make to the end an win. I’d want Paulie an Corey out first then Paul just cause I can’t stand him.

We can’t post videos. We’re an affiliate partner with CBS and its against their terms of use. CBS charges a small fee for the live feeds so obviously they don’t want people posting videos of the live feeds for free.

People can’t be troubled to type out Victor’s full name butt “Tiffanessa” rolls right off the keyboard? Every year there are several people who try like hell to get their personally created nickname for a specific HG to catch on. Dontcha think “Tiffanessa” is going to be shortened to “Tiff” anyway?? I give this nickname a D- . It ranks right up there with “Brenchal” in creativity.

Why can’t they talk without using bad words

Some people take everything so serious he was saying that they are the ones playing the game not America therefore the decisions they make are base on them being in the house . I do think that Paulie is playing a smart game and will make it far due to him being so close to Frank but the good thing is that Frank is the bigger target, same as Z and Nicole they are in a good spot because Frank would take out Day before those two. I’m starting to think that James is in the best spot. But things change everyday in this game so no one is really safe, with the 8 pack because their alliance is to big so it will be fun to see whotl turns on who first.

We can’t post videos. We’re an affiliate partner with CBS and its against their terms of use. CBS charges a small fee for the live feeds so obviously they don’t want people posting videos of the live feeds for free.

The live feeds are super cheap at $5.99 a month and you can flashback to any day or time.

So when there a Phoebe Cates moment, people will pay…

I don’t think Frank is anything like Boogie or Derrick. Boogie was never sneaky and never pretended to be anyone’s friend. He was loud and in your face. Derrick was so low key and knew not to push to hard. That’s the reason no one but Donny figured out his game until it was too late and, even then, they continued to play his game instead of their own. Over the years my faves have never been based on the polls. There have been times that my favorite seemed to be universally loved and times when I was in a very small minority with who I was rooting for. The first time Frank played seemed to be one of the years it was most split with half the comments coming from hard core supporters and half coming from people who couldn’t stand him. I don’t know where Nicole stood in the polls. My fave her season was Hayden but I knew with Derrick’s alliance and the BoB twist he didn’t stand a chance. Nicole was not America’s pick for favorite house guest that season though. That honor went to Donny.

F- you Paulie. From an American.

Oh, Paulie, Paulie, Paulie…your immaturity is showing. When you say. “Fuck America” it’s not pretty. We don’t take that sitting down. Definitely keep that in mind when voting for America’s Favorite after your sorry ass gets voted out.

Paulie hates Americans and so does Arianna and Frankie Grande.