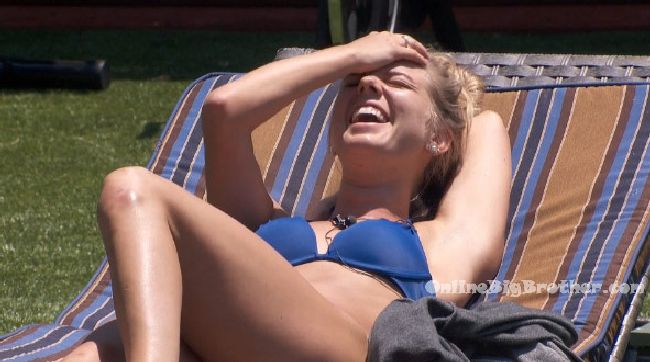 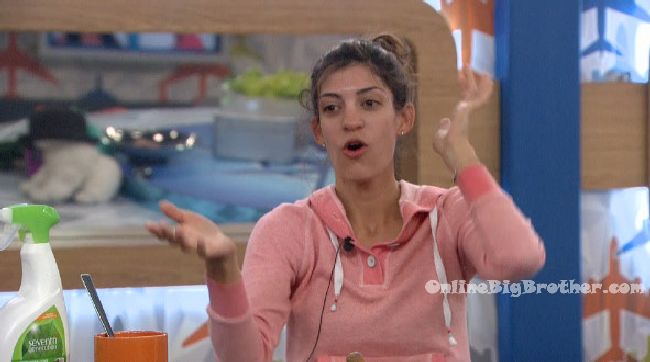 11am – 11:15am Cam 1-2James and Paulie are talking in the kitchen. Paulie says I just think there are people that are gunning no matter what. Plus the whole team thing makes the pool smaller. James says you’re good to go, I wouldn’t even worry about it. I’ve got you. Paulie says I trust you. James says you’ve got all of us. Just sit down and chill. Paulie says the only reason why the next HOH I would consider going for it is because I think if Vic won it he would gun for me. James says I think he would put up a vet. If you think that bro, go get it. Gotta take them out before they take you out. On my season I knew some people were gunning for me, I just had to win. 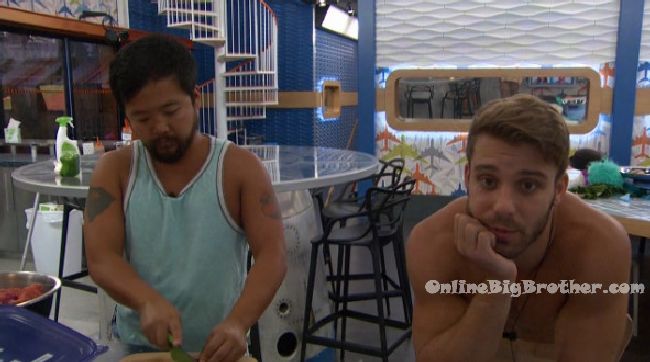 11:20am Backyard Cam 1-2 Paulie, Natalie and Bronte are chatting. Natalie talks about wanting to start her own non profit charity for the youth. James asks Natalie how many pageants she’s been in? Natalie says 1, Miss New York. James asks and you came in top 5? Natalie says top 15. Paul joins Bridgette on the lounger. She tells him to thank Bronte. She cleaned up after you all last night.

11:50am James, Frank and Corey are talking in the bedroom about how they pranked Nicole with shaving cream last night. James and Corey head to the kitchen. Nicole tells Corey that she’s thought of way better ways to prank him. Nicole heads outside. They talk about how drunk Paul was last night. Paul says what did I say when I drink.. I go o to 100 and then pass out. Paulie says F**king through the wall and then crash immediately. I told you how I drink I go 0 to 100 and then to 0 immediately.

12:10pm – 12:25pm Cam 1-2 Paul asks Nicole do you hate it when Michelle fawns over you? Victor laughs that Michelle has a stash of Nicole’s hair. Nicole defends Michelle and says she’s just well educated. Paul comments on how Michelle knew Nicole had recently seen Hayden. Nicole asks Paul if he thinks it would be weird if she followed him and knew stuff about him. Paul says I’d take it! I’d wife you up! 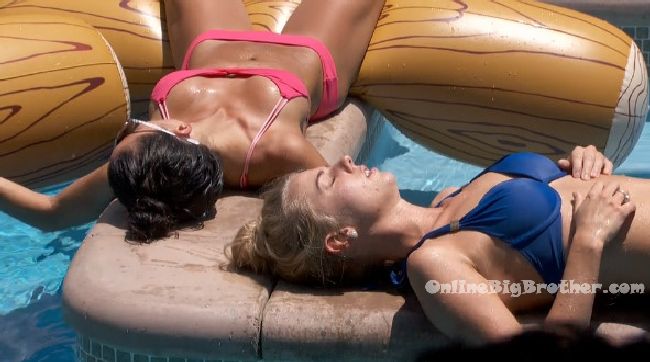 Nicole seriously needs to keep her promise. She is supposed to play independent with the group of people she trusts

Nicole better hope Da & Michelle keep the secret about getting Frank & James out, could see that tidbit slipping out & the guys siding while girls fracture… it’s a long time till Thursday, and guys may want to even things out a bit…

How does Nicole spending time with people outside of her alliance mean she’s going to break her word? That’s just good social gameplay, which is the point of BB

Hello Everyone! Oh My. What A strange season. Here is the T!:

– As a young gay man, I am VERY disappointed in Jozea. That over inflated ego is not cute and it is unfortunate to say I will be happy to see him get “blindsided” this upcoming eviction. However, it is until Thursday and the better move would be to get out Paulie to make a statement.

– And Tiffany, oh Tiffany, how like your sister you are. I do agree she seems more chill, but I just KNOW she is using her emotions to her advantage and it unfortunately is backfiring on her already.

-At this point, I want to like one of the guys but the girls they are really dominating strategy wise and I love it! These boys need to step up several notches to get into the competitive spirit of this game. Or face one being evicted after another.

For now, I am very Team Bronte (shes annoying and Its borderline endearing!) , Bridgette, Tiffany, and James.

Is Jozea still here? What’s taking so long? Him and his hat should be out the door! Now is not soon enough!

Bront is a sweet girl. I like her. She can’t help that she was born with a voice like she has.

Bronte is growing on me. She is level headed and not playing too hot. And she is actually quite cute. And in such great shape and beautiful .

Corey is the most disappointing from first interviews to now. A boring meathead. It’s hard to top Clay…but you buddy have. Duh…

I’m team Bronte! I do like Paulie too on the guy side. Seems like a standup guy.

Was anyone from Canada able to get CBS All Access without having to change VPN etc…?

Without a VPN it won’t work. The feeds are geographically blocked.

Who are your favorites thus far??

I don’t have a fave yet.. I’m still trying to get to know them.

Dawg,
Where’s Simon? Is everything ok? I’ve noticed he hasn’t made any posts and you’ve been working your tail off.

Hi Willow! I’m glad to see you back again!! And thanks for saying we’re doing a great job!
Not to worry, Simon is posting as well ;) This season Simon and I have different schedules than seasons past because I am now trying to juggle a full time job on top of working on the site 10 – 12 hours a day … :O

That’s good to hear. Glad he’s ok. Man, that stinks for you though. That’s a lot of work. Glad you’re still doing it though. Very thankful. Do you guys still have that donation page? And Amazon link? I’m getting ready to order from Amazon in a week or so.

Nevermind, I found the Amazon link :)

Can someone tell me how the next HOH is going to work? Will they still be playing in teams? Like will the other members of the winner’s team still get immunity for the week? This might throw a wrench in the giant alliance’s plans if Victor, Natalie, or Bronte win. Their names (along with Paul) are the only ones being tossed around as targets for next week.

too much immunity WTF is going on?

The teams are sticking around a bit and I don’t think they’ve said exactly how the teams are involved in HoH. Maybe it’s the team that wins picks the HoH from their team like last time. I just hope half the house isn’t safe each week.

I heard that Corey friend set a goat on fire, was that before or after he had sex with it?