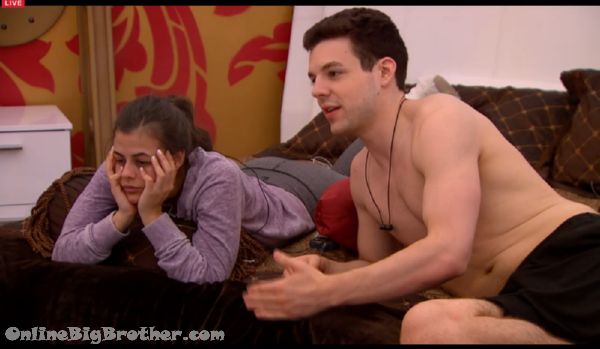 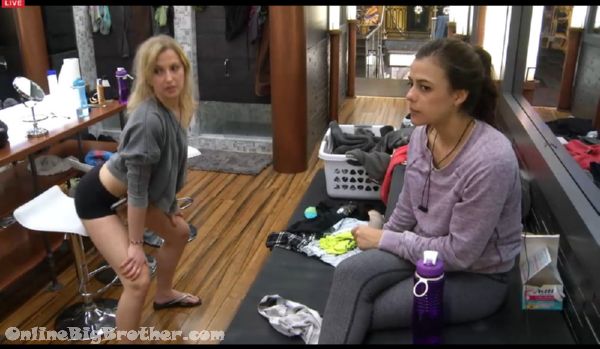 10:59pm Ashleigh and Pili
Ashleigh says that Godfrey is coming after them. Sounds like the girls want to backdoor Godfrey this week saying that no matter who wins the POV they’ll use it so they can put Godfrey up. 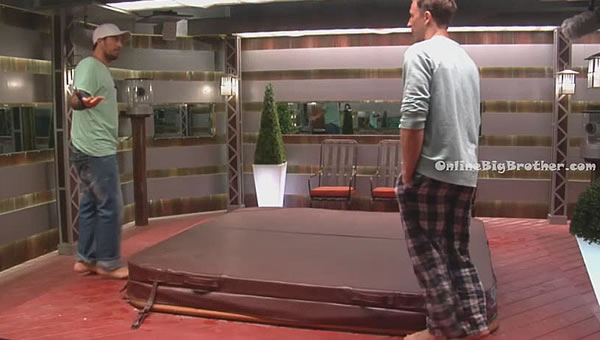 11:01pm Bobby and Bruno
Bruno says he’s pissed off about them not knowing they could change their answers.
Bobby – you think the girls are going to sell us out
Bruno thinks they might but for now they need to play it cool. Bobby wants to work with Godfrey way more than the girls. Bruno says they need to talk to Kevin and get a read on him. Bobby thinks he has a better chance to get votes if he’s up against Godfrey.
Bobby thinks his best chance in staying is getting up beside Godfrey. 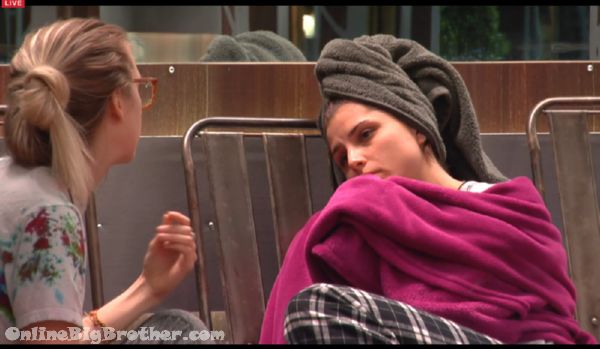 11:21pm Sarah and Willow
Sarah says she feels like that competition was for her to win. Willow doesn’t think Sindy answered truthfully. Willow says Kevin won’t even looks at her and Zach betrayed her.
Sarah – We need to make sure God goes home.
Sarah says if god wins Veto Bobby will go up then they don’t have the votes to save bobby. Sarah thinks either Bobby or Godfrey is going home.
Sarah says she’s talked a lot of sh1t in this house about the other plays but looks at her she can’t win comps she’s shitty to.
Sarah – we have to make it through this week.. we still have the numbers.
Sarah tells her she just wants to see Willow smile, “I love you so much” 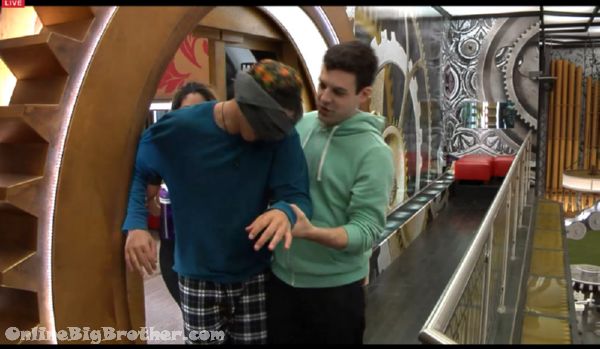 Midnight Chatting about the first day in the house.. laughs and jokes 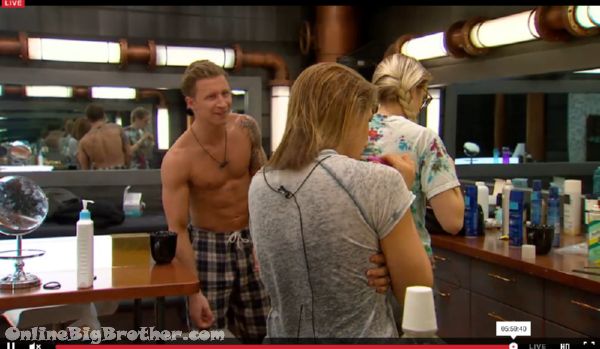 12:21am bathroom Sarah, Willow, Bruno and Bobby
Sarah saying it makes no sense for them to turn on each other, “It helps none of us” Sarah tells Bobby and Bruno stay as close as possible to the couples. Piliar walks in.

I’m team Willow/Britnee/Sarah all the way. As much as I really want Bobby to be evicted, I am Sindy’s biggest fan. I want Bruno/Bobby to win PoV so that Bobby can survive, actually start trying in competitions, and gun for Zach/Kevin- just so they regret evicting Sindy. They screwed up big time playing it safe halfway through the game.

big fan of sindy?? she is the worst BBCAN player of all time with an S

Hey, Simon/Dawg. How frustrating it is to listen to Zach’s delusions?

I find it funny actually.. but after abotu a hour it does get a bit much ;)

His arguments (?) are so circular and indicative of his lack of read on the HG’s. I wish he was entertaining while presenting them.

Kevin what are you doing? Is this alliance making you dumber? You have so much potential!

Why the hell do they think that Bobby/Bruno would go after Sarah/Brittnee? No, just no…

I haven’t seen the episode yet, so is this how next week goes? After Kevin’s HOH is done, then someone else becomes HOH and nominates 3 people? And 2 go home? So essentially 3 people leave next week?

I agree, Kevin is screwing up this HOH. And I think we can all agree after seeing him make pili suck mayo off his fingers that Kevin DOES NOT know the meaning of sexy.

Hate the diapers. Every single one of them.

I feel like a President just won his third presidential term. -_-

Attention Daipers: Stop thinking you’re smarter than the other side. If you are considering taking a shot, they probably are too. Also, tell me one good reason why anyone wouldn’t go for a clear 4 alliance? Mind numbing conversations going on in the HOH room right now.

That said, i hope you guys mess up and keep Bobby Bruno only to be taken out by them next week

But then our only source of entertanment, Godfrey, would go home. :(

Honestly Bobby and Britnee being the noms doesn’t sound too bad. Hopefully they would stay that way and Bobby will be the first casualty of this week.

Bobby would deserve to go home after throwing all these comps

Bobby shouldve been evicted first week for being the biggest douchebag

High Five on that on Jen!

I’m kinda hoping that the seagull wins the POV would hate for her to get Backdoored.

it’s too soon for a move that big. maybe in another 2 weeks.

SuZQ
Reply to  another name

Who the hell is the seagull?

That’s seagull with an “S” lol

It’s one of the birds that visits once in a while. Usually around the hot tub area.
It would be GREAT if, during a VETO comp, it would swoop in and grab the VETO by the chain (?) and fly off with it. I’d be laughing hysterically.

Does Sarah actually loves Willow or what

I think Willow is in love with Sarah haha

Willow is in love with everyone

It appears that after JP left, Zach’s logic and strategy had also left the house.
If anything this conversation should start raising red flags in Kevin’s mind as to why Zach is so adamant about not targeting Bruno/Bobby.

I don’t think there’s any room for ‘logic’ in Zach’s pea-sized brain. Remember, he thought no one would have the stones to vote out JP.

if kevin plays HIS game and goes after bobby/Bruno, I will regain the respect that has been waning for him. if kevin plays Zach’s game for him and goes after godfrey, my respect will stay where it is.
not saying this because of a dislike for Zach. or bobby or Bruno. I understand the value of working with an alliance. that doesn’t mean that a player should take actions that harm their own game in order to enhance another member of the alliance’s imo. their action should be the closest to beneficial to all of the alliance, but mostly to the hoh himself. bobby and Bruno are Zach and Ashleigh’s backup, kevin would have to be a fool not to realize it. godfrey is after Zach. bobby is/was after kevin for weeks. smartest for kevin to get rid of bobby. it keeps Zach and ash tied to him. it gets rid of the guy blantantly targeting him. keeping bobby and Bruno intact leaves kevin less secure.
if he steers the ship himself, cool. if he lets someone else be captian for the week, not cool.

“However, they did have more of an advantage talking to her and talking to her on a more personal level.” Are you shitting me right now Brittany? This comp was designed for Sarah and some of the rest of these guys, who spoke to Sindy all times of the day and spoke on these specific subjects and she still didn’t pull it out. When they say its their own fault and then try to justify it, its comes off as sad and unrootable. BB actually tried to give it to them, they even let Sindy CHOOSE who would win between the last two making it nearly impossible for a Diaper to win but they did it so they truly deserve a little less flack for that. The house and production were working against them and they beat the odds and they’re honestly not that terrible we just need more drama in the house, these Diapers lack personality and the balls to go all out. This episode was torture, I only watched the first 10 minutes and the last and then they had the nerve to cut us off after the first question after an episode full of of nothing. I’m still annoyed as you can tell.

You missed the 20 minute road trip! I live in Nova Scotia looked like the trip across Canada stopped at Ottawa. Guess production forgot what part of the country the1st two winners came from. ROFL

I hope Sarah and Bruno goes on the block!!! Or even better Sarah and willow and backdoor Bruno! Bobby is no threat!!! #ijustwantacalgaryplayertowin lol ????????????

Sarah shut up already! Stop complaining and start winning! Crying isn’t going to get you anywhere.

Sorry to interject with a little sarcasm, but so far, crying has gotten her the support of some hardcore fans (I really don’t get it), a bottle of wine while have-not and some gone-out-of-their-way help by production for the HOH comp (still not enough though).
Not bad, eh? ;)

Sounds like it is almost definitely going to be Bobby and Britt up. It’s difficult to call the Diapers meeting even remotely strategic. It’s really funny they still think the rest of the house is ignoring how close they are.

Well Britt I guess you’re going to be the Spencer of this season. She’s going to be p**sed when Kevin puts her up.

I hope Godfrey, Sarah, and Britt can survive this week and one of them or Bruno win the round 2 HOH.

Ideally the three HG leaving this week would be Bobby, Kevin, and Zach.

I would sanction either Ashleigh or Pili leaving as well. I would like to see how Kevin plays if he lost any of his closest allies.

Willow seems really annoying sticking her face in front of Sarah’s in an attempt to comfort her, obv she’s uncomfortable as anyone would be when their friend is crying but just let her cry it out jeez.

Just shoot in me in effin head, please thanks.

I wish Kevin would drop Zach! Listening to Zach and going after Godfrey, who is basically alone is a bad move! Godfrey should be a fall back option, but not the main target! Bruno is the biggest threat in the game outside of Kevin, not taking a shot at him now may cost Kevin the money!

Its boring when the power remains the same week after week i don’t know what bb can do about its become a big problem in bbus and now in this season of bbcan.

Hmmm. Bobby and Brit up is sexy? Hunh? WHAT?
Oh! I get it! Kevin is confused by the term “pawn star”. I forgot he’s still in diapers.

He’s speaking to the level his alliance thinks on. Kevin wants a chop member gone to weaken Zach’s alternatives.
If the other side can see how Zach deflected Kevin as a target, then surely Kevin see’s how Zach is deflecting the Chop members as targets.

What would really be “sexy” is if Kevin BD’d Zach in “retribution”. He’d definitely get both JP and CCCCindy’s vote .