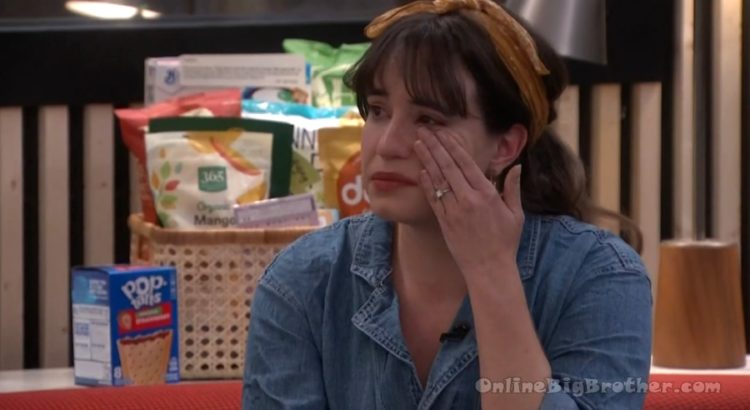 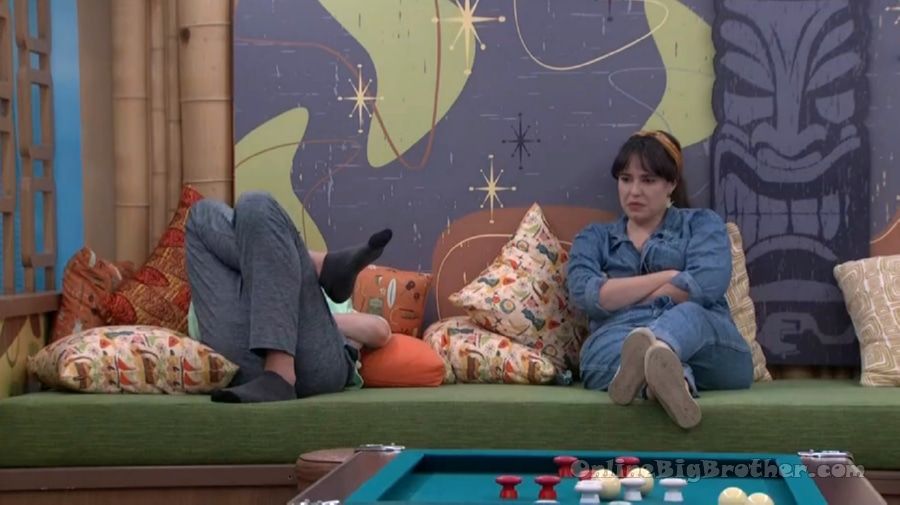 2:00 pm Michael and Brittany
They’ve been whispering for a bit.
Britt – maybe they are wanting to take a shot at Monte/Taylor. they don’t care about us enough.
Michael – could be
Britt – I just don’t think they would take a shot at us before them.
Michael – I’d be surprised especially if Kyle is in his ear
Michael – And Taylor had said she would put Turner up as a pawn.
Britt – so did Monte..
Michael – She almost did she said she was going to.
Britt – I forgot about that
Michael – I really want to talk with Kyle
Britt – I want to find out what happened without trying too hard

Michael – everyone is saying ohh Kyle you can get Alyssa to do anything
Britt – it’s like her worst Big brother fear
Michael – that’s what happened
Britt – she just doesn’t know how bad it is. Her entire game is defined by blunders of trusting Kyle.
Michael – Kyle used the veto on her that one week then didn’t use it to save her last week
Britt – I think she knows there is no shot at her winning
Michael – yeah
Britt – Terrance was saying Joe was trying to deny how close he is to Monte.
Michael – we’ll just never know what was actually said 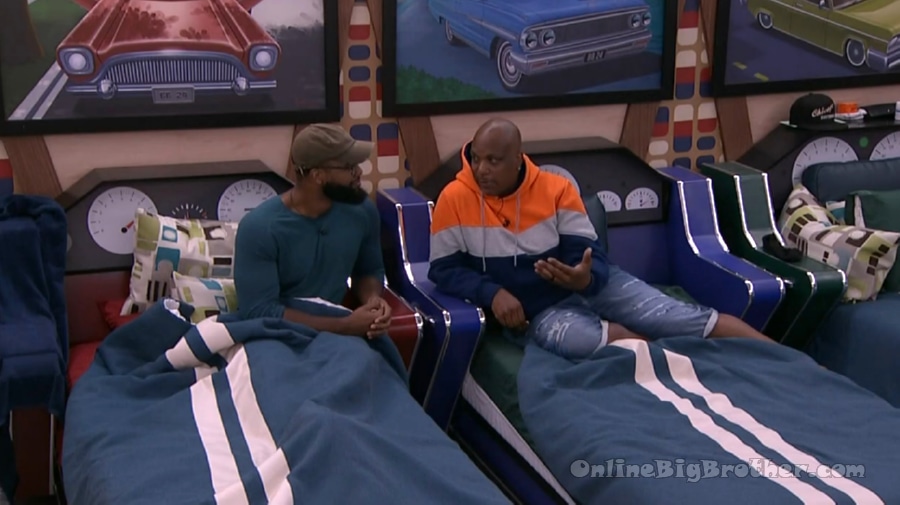 2:20 pm Terrance and Monte
Terrance – Dyre Fest.. oh man it was crazy bro I’ll be honest with you. I wanted to check the temperature with the showmance Bro that was my priority because at the end I wanted to see what was going on with Joe. The Indy vote was kinda throwing me off with things.
Terrance – Bro who you got? who you with? Why you change your vote at the last moment?
Terrance – Initially I put up him and Turner. I said like bro just talk to me let me know what is going on. He was really vague not really giving me shit. I was like alright bro. Then his story was getting kinda crazy.
Terrance – he was saying ‘I can go inside the house I can flip things I can show you I will sacrifice myself if it don’t work I’ll go home the next week I’ll make sure you’re safe’
Terrance – those are the things you can promise nobody Bro
Terrance – I’m still looking at the showmance. He’s going off the rail, you make me flak up on you. F*** it pull Turner down put Kyle up
Monte – then the vote takes care of itself.
Terrance – gave me a couple more days to think and see which one is the more dangerous Is Joe more dangerous or this showmance?
Terrance – Joe was making himself look crazy bro just the things he was saying.
Terrance – he was working everybody having all these private meetings .. Bro he was walking like Pooch to everybody.. you got a minute? you got a minute?
Terrance – even when the veto is over with.
Monte – I was always close to Joe but I warned him you can play this game and play multiple sides but it’ll come back to bite you.

Terrance says he was never included in Old Skool he was just in the room when Nicole formed it and he was added in.
Monte – on my side of things when it came to big Brochella it was a little bit confusing to me how Michael made his selections. He was forming what he thinks is the best combination to get jasmine out this week.
Terrance – the whole thing was to get Jasmine
Monte- it had to have been.

Monte brings up how Michael threw last week’s veto to Brittany. He adds that Micheal could have easily won that veto he’s a beast of a competitor they can’t beat him at this point

Monte says if anyone wins the veto they have to use it to put Michael up. Terrance fully agrees.
Terrance goes on about how Joe “Pooched” himself over played making evicting him an easy decision for them.

Monte says Kyle has been dialing back in a lot of competitions.
Terrance – I watched him not knowing how to play cornhole to this man sitting there studying it and developing a concept and beating the shi1t outta turner. Turner was good already because he played with his family.
Feeds flip to Alyssa, Brit and Mike chatting. 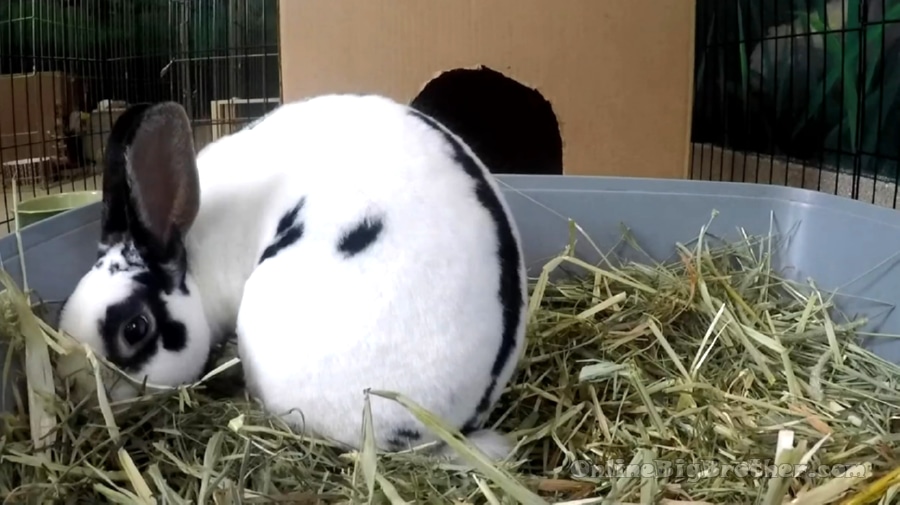 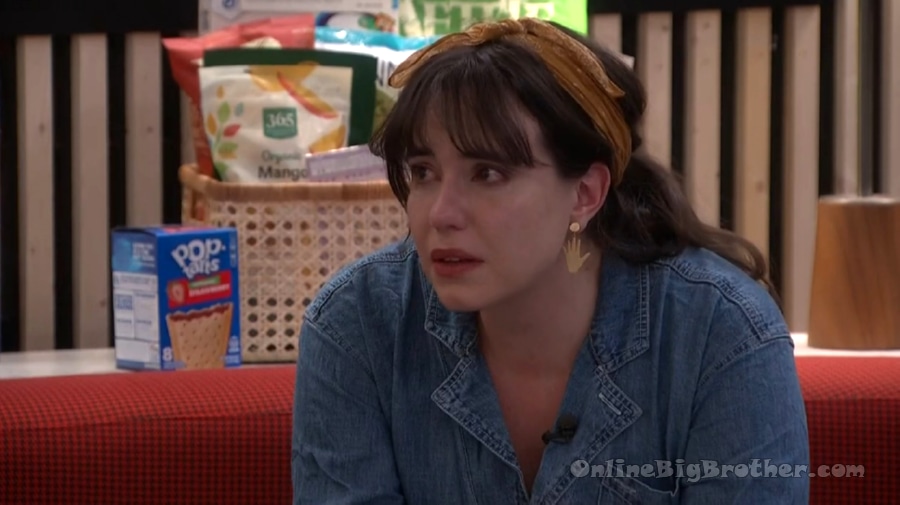 4:32 pm Brit and Turner
Britt – My head is hurting right now.. ohh my god
Britt – I don’t know how Joe would say something like that if it wasn’t true
Turner – he said Taylor asked me to go to the end with her and Brittany. Joe said no and killed it but clearly, Taylor has plans that do not include me.
Brit – Ohh my god and she told me like after I have a strong suspicion that Joe would want to go not only final three. her proposal was Michael, me, her, Monte and Joe stays he’s a 5th.

Turner – you are not going home this week. I’m sorry you were the one that got the shit end of the stick here
Britt – I understand. I’m just trying to processing I felt pretty close to Taylor and I’m just kinda processing like ohh shit why were you playing.. why were you saying things and trying to maneuver and you didn’t even try to tell me first? Give me a chance to say HEY. That’s not fair I didn’t agree to anything. She didn’t even propose a final 3 honestly what reality did she think? it doesn’t make sense.
Turner – I hope you understand why I put Taylor up and yo got wrapped up in this. I didn’t want to go rogue against the leftovers but at that point I’m like okay Taylor clearly has plans that don’t involve me.

Without reader support this site and these spoilers wouldn’t be possible.
Please consider a donation to keep the madness going.
Any amount is greatly appreciated!

If Taylor wins then Michael goes home. I am hoping no matter who goes home that Brittany wins the next HoH

If Michael plays in the veto and wins and takes Brittany down, who would Turner put up? Would it be Monte since he made it seem like he wanted to work with him. Or will Kyle convince him that a loyal person to him wouldn’t be wise because Terrance and Alyssa can’t win anything. I don’t like the game Kyle is playing, but he knows who he is dealing with and isn’t afraid to make things messy. It’s working for him so far.

I think it would be Terrance. Turner made it pretty clear to Kyle he didnt want to depend on Terrence and Alyssa to win comps and they needed to get Monte on board and he could easily say Terrance put him up last week so it’s an easy pawn though then he needs to hope Monte doesn’t flip back

And just like that Terrance has already started spilling the tea little by little. He will eventually expose Kyle. Terrance can’t keep his mouth shut.

And given the conversation between Brittany & Michael they don’t completely buy what Turner is selling and have an idea that Michael is the target. This is where jury management comes into play and Kyle won’t be winning at this point

Just a couple of comments…I know there’s a lot of Kyle haters, but he has given us one of the best seasons in a looooong while. His moves are reminiscent of the old Big Brother and I’m loving it. In Big Brother show’s introduction it ends with “Let the backstabbing begin!” And yet when someone does it, they get hate. He was the next target and his move saved him. People should not be there to make friends, they should be there to win. I get jury management is part of it, but if you don’t get to the end jury doesn’t matter. You tell them to vote on game play and not be bitter. I think real fans will put pettiness aside. Taylor won’t but that’s one vote, and Kyle was never getting hers anyway. He was the reason she didn’t get to give her petty speech about the trip…you know, the one Jasmine took! If you wanted that trip you should have won the comp!

After watching BB and Survivor all these years, great players have some allegiance. Kyle has turned on every allegiance including his girlfriend. He may not treat her as poorly has Mickie did his, but he hasn’t had the best of intentions and used her. In the end, I can’t see him staying loyal to Turner and Monte. Michael and Brittany already suspect Kyle for this. He has a long road to the end.

I totally disagree. He was loyal to LO until he asked to make a change that didn’t make any sense and was not beneficial to his game. If he didn’t do what he did, he would have been gone this last week.

And as far as Alyssa is concerned , he was having to play the middle with her. He was loyal to Lo while doing what he could to protect her.

If Kyle moves are “ reminiscent of the old Big Brother , I don’t remember it like you. As far as I’m concerned he is only reminiscent of Mickie, sc_____his showmance.

Exactly. Couldn’t have said it better myself

I think Michael and Brittany are such big fans and nice persons , to overcome this and see this as a game move that they would of done by themselves, had given the chance.

They gotta get Michael out. They have to or no one else stands a chance. As Terrance says, they can pull out their swords after Michael is gone.

Pulling for the dyrefest to make it to final 4. All the Bros need to go!

Brit throwing Taylor under the bus before veto is played is dumb. If Michael wins veto and saves her they could probably flip Monte back into voting with them to save Taylor over Terrence who I assume would be turners choice

I am betting if Michael wins veto, Monte sees the block to ensure Taylor goes home.

There are a lot of “ifs” in that plan but I agree, Brit stopped playing smart once the heat got applied.

Okay, that was a halfway decent conversation between Taylor and Turner

The Michael/Taylor conversation sets up interesting plot points depending on who wins the veto.

Omg
What if Brittany wins veto and DOESN’T USE IT because of the chance of Michael going up
?

I find it interesting that most people on here do not care what happens just as long as Michael doesn’t win.

I love Michael. Why does nobody want him to win? He’s the best player this season-he’s smart and he’s winning physical comps.

For those of you saying Kyle will win in the end, have you not watched the last 6 years. Jury management is key and Kyle’s is terrible. He went beyond betrayal and made some comments biased and personal. Game play is one thing but this went beyond that. And trust, if Micheal and bitter Britney are in the jury, every person of color will know about Kyle. Anyone in a f2 with him will win, even Terrance.