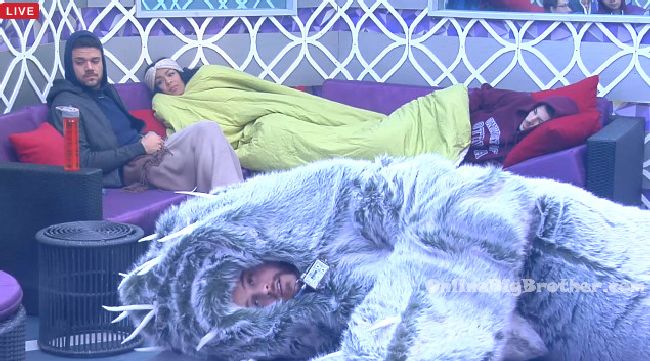 5:15pm Kitchen Table – Ramsey says its going to be hard for you. Jared says you have no idea. Ramsey says just do what I did and wait until the end of the day and do what the majority does. Jared says its a sh*tty week. Ramsey says I think its important for you to start thinking of the next week. Jared says it depends on who stays. Ramsey says Kelsey is ride or die with you. Jared says I can’t stand what she’s (Loveita) doing with Joel. It bothers me. Ramsey says stuff like this happens in the real world and you can’t save everyone. Jared says its ruining his game. You can’t even talk to him about it. Ramsey says he’ll get defensive about it. Jared says it makes me so mad because that one day he came down in tears and whispered to Mitch that she (Loveita) making me vote out Cassandra. Ramsey says after finding out the things that you’ve said its changed my perspective on her a lot! Jared asks what do you think of Loveita. Ramsey says I thought she was a stand up girl until I found out a lot of things. Jared says Joel was actually playing a good game up till this week. Jared asks who do you want to go after next week. Ramsey says I’m thinking of getting rid of some middle people. I don’t want to go after camps. I don’t know where I stand with Cass and the other one would be sitting down in my HOH and talking to everyone. Ramsey asks Jared who he would put up? Jared says Dallas because he’s said he’s coming after me. The other I haven’t put too much thought into. 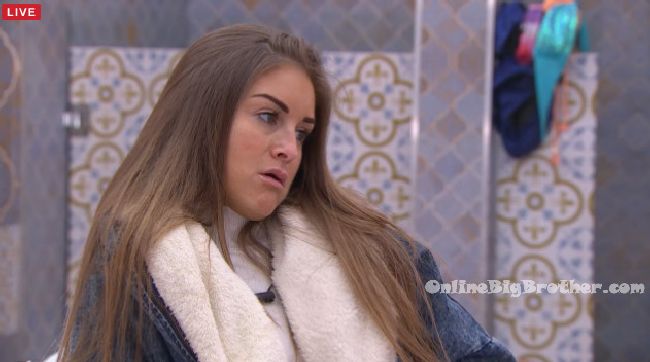 5:30pm In the bathroom – Tim talks about how draining some of the people are in the house. Nikki calls them energy thieves. tells Nikki the game talk is annoying. Nikki says yeah I’ve gotten to that point. Tim says I just don’t want to talk any more. Nikki says its been nice to have a break from Phil. He used to follow me around constantly and stare at me. There doesn’t seem to be an in between. I just want to be friends. It’s either that way or he (Phil) won’t talk to me. They head to the HOH room. Tim says I don’t want to share it (HOH) if he gets it. Nikki asks can I come in though? Tim says Yes, I don’t want any game chat. If people try to talk game I will tell them to GET OUT! I’m not having any game chat as HOH unless it’s had in a debate situation with the whole house. 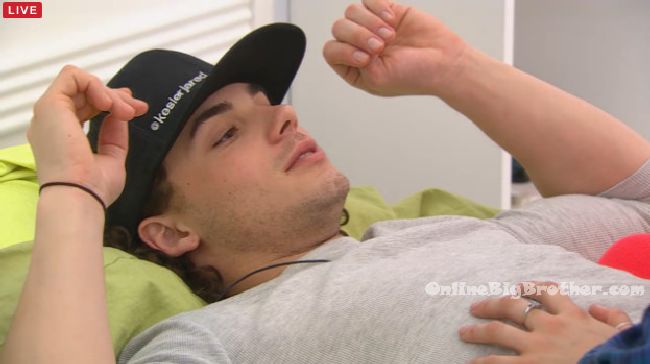 5:45pm – 6:15pm Bedroom – Kelsey and Jared comment on how they’re in quite the predicament. Jared says I knew it would happen, just not this early. Kelsey talks about her speech and says Dallas isn’t going to use it. I know you want me to stay. Jared says I never said that. Kelsey asks why strategically speaking do you say it would be better for me to go home? Jared says because then I don’t look like two people. Jared talks about how Maddy talked about how she is annoyed that Nick follows her around everywhere. I have a boyfriend. Kelsey asks why are you (Maddy) hanging out with him all the time then?!! Jared says he just doesn’t know what he is going to do. I’m going to talk to Mitch about it. Kelsey says he’ll tell you to do the strategic route. Jared says he wasn’t. Raul joins them. Kelsey says if I go you should work with the brothers. Jared says if you go I would work with Cassandra, Tim, the brothers and Mitch. Raul asks Kelsey what she’s thinking. Kelsey says obviously I don’t want to go. I want to stay here with you guys. If I do go I am okay with it. Jared says I just don’t want any part of it. Jared tells Raul that Ramsey said he would probably get rid of you. 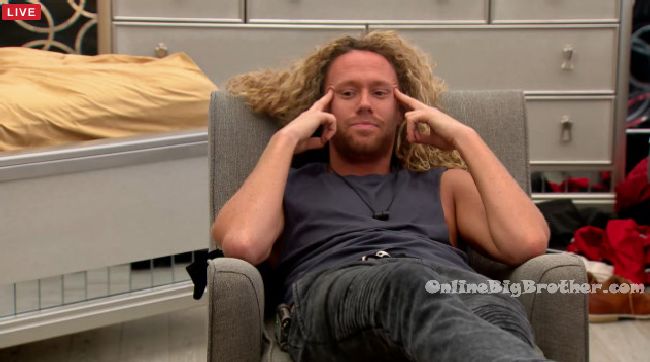 6:35pm – 7pm HOH room – Tim, Nikki, Joel and Loveita are talking. Tim says if he’s HOH he’ll hold a board meeting. If you don’t bring it up at the board meeting, why were you hiding it? What were you afraid of? Tim says he will do it like BBAU where he’ll get each person to name 2 house guests for eviction. If you don’t want to give names then that’s two points against you. Tim tells Raul its a sh*t situation you being up with your friend. A lot of people think you want it more than Kelsey. Jared and Kelsey will never vote against each other whereas you might vote against Jared. I think Kelsey staying is what most people want because it keeps Jared tied up with Kelsey. At the end of the day stay true to who you are and show that honest vulnerability to people. Whoever goes this week its going to be a player that changes the atmosphere of this place. Game on! Tim says there could be a hidden veto. If ever there was a week it would be this one. Raul leaves.


HELP keep the spoilers coming. Show your support by giving a tip :)

Tim talking to Nikki doesn’t help today’s growing negative feeling about Tim. I don’t know if it’s just because I’m cranky, or if it’s just the new reality for me.
What happened to we’re all equals / what’s mine is yours / I can’t stand when people sit on their throne in the HOH talk?
No sharing (it’s his throneroom). No game talk (I don’t want your opinion. Everyone has to reveal their plans or their on the block (don’t make me send in the secret police to inform on you).
How’s that dictatorship idea going?

Tim has lost the plot

If Maddy has a boyfriend, why is she making out with Nick.. lol

Because she’s a piece of shit.

because it’s just a boyfriend, i’, sick of people like you condemning a young girl for kissing a boy. F OFF!

Tim is so annoying.

loveita must be this years productions pet, I have never seen a better edit.they made her look like she just bent down to Joel. I think the fake DE this week is because Nikki & Tim have completed their contracts and will be leavng the show. I could be wrong but, some of their coments have sounded like they’re there for a good time not a long time. Don’t really care who leaves this week but, I hope they all wake up and realize Dallas is this years comp beast and will be hard to beat..

Sometimes i get the feeling that they double dose Nikki’s tablets on days where they want her to disappear, and then roll her out when there is a lull in activity in the house so that she can pull a Nikki for the episodes.
Tim is the production answer to “oh no, it’s gotten so formula, so boring and expected every year two big alliances battle it out blah blah blah.” So send in Tim with the mission statement that the middle will rise and take power.

Joel is a sweetheart. I would love if they gave him a makeover one night. Styled his hair, helped him a little to boost up his confidence. He kind of looks like Eric Mabius, the boss on the tv series Ugly Betty. That would be fun to watch on the live feeds