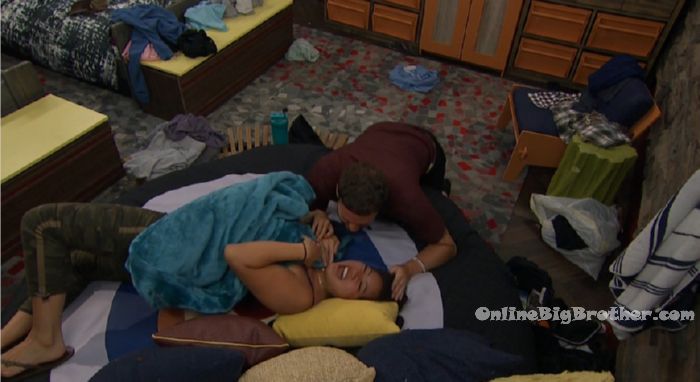 Big Brother Spoilers – Christie won the HOH, Nominated Cliff and Kathryn. Veto players were: Christie, Kathryn Cliff, Sam, Jack, Nicole. POV  Host was Tommy.  Sam wins the Power of Veto, it was called Food fight. Sam used the Veto on Cliff and Christie nominated Ovi as the replacement. Ovi Has a power he can secretly force the Head of Household to select two new Noms after one of the first 6 nomination ceremonies. WE’ve just had 1 nomination ceremony. 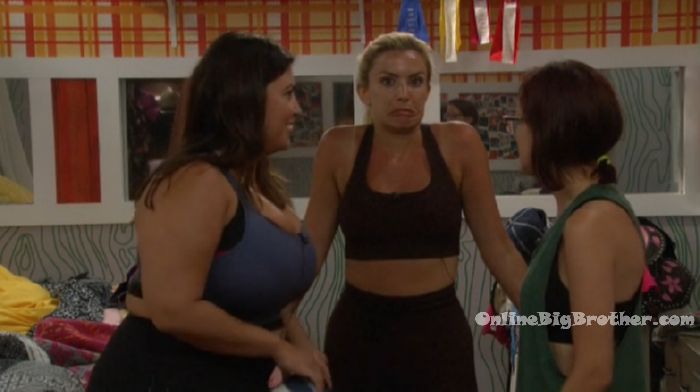 8:23pm Bedroom. Jess, Kat and Nicole. Jess – Cliff said that he would vote for you and Christie was there so everyone knows that we’re all pro you. So if there is even one vote for not against Ovi then we need to figure out who the f**k it was. Kat – yeah. If its just one vote I am not going to get caught up in that. 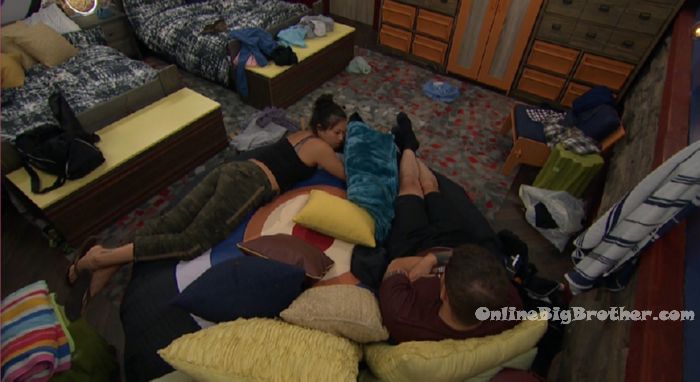 8:17pm Kitchen – Bella and Nick. Bella – ..something really irritated me so I knew I had to calm down before I said anything. For me I had this idea in my head and I like ran with it… and I was just getting really pissed off. I just like really got annoyed and I don’t want to talk about it. Nick – I want to talk about it. Bella – but I don’t .. I am still just so angry. I want to cool off first. After a few minutes Nick and Bella head to the bedroom to talk. Nick – who did you see .. oh when I carried Sis (Analyse) in? She asked me to do it. Bella – okay well that’s annoying to me. For me I am like well it doesn’t matter because its not like we’re a thing or anything.. but I just feel like sh*tty. Nick – well I don’t want you to feel like that. I asked you 3 days ago what you wanted to do .. do you not remember that?! Bella – yeah, but if you want to snuggle with everyone else then just don’t snuggle with me. Nick – ah.. okay .. but I do like you though. Its not my choice that I’m not with you right now. Besides that what else did I do? I literally told you I wanted to kiss you. I talk about you in every DR session I’ve ever had. I literally tell them how much I care about you. I told them that you’re my ride or die. Bella – I know but some times its hard to look at. Nick – okay well I’ll stop. Bella – the whole situation has me irritated. I’m allowed to be irritated. Nick – I’m not mad. I’m upset that my actions caused you to feel that way. The only reason I said that about a showmance out in the open is it puts a target on your back. Did you not see Jack and Sis yesterday? Bella – okay then we will just not do anything. Its fine. At the end of the day we’re here to win big brother.

Meanwhile outside the door…

Nick – I knew you were upset with me because you were avoiding me. All I do is care about. I literally can’t play this game without you. I’ll literally go out there and kiss you! If you want right now we will go out and do that. Bella – no I just want you to stop being all over everyone. Nick – even Christie?! She doesn’t like guys. Bella – its just too much. I just don’t want to see it. Its also not my place to say that. Nick – at the end of the season you’ll see how much I tell them. I literally like you a lot! I swear! I literally come find you all the time because you make me feel comfortable and safe. I flirt with other people to throw off the trail. I won’t touch other people. But what do you want from this because I asked you three days ago and you said it wasn’t a good idea because of your situation at home. I told you I’m committed if you’re in. Bella – I am in!! Nick – if you are in then that’s good but you literally told me three days ago that you’re not in. Bella – I’m in. Nick – if you’re going to say that you like me and that your home situation (live in boyfriend) is done with, then I’m F**king 100% down! 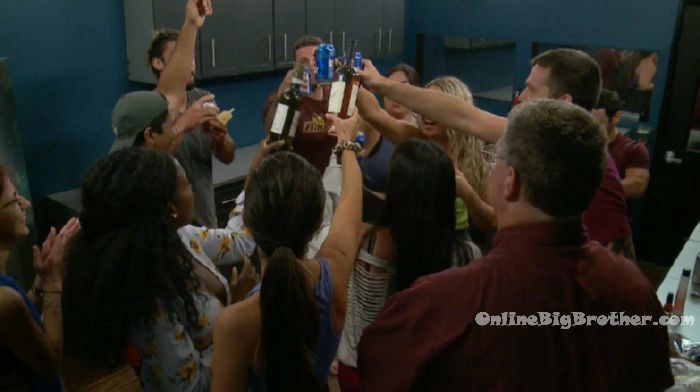 9:52pm – 10pm Hammock. Kemi and Nicole. Kemi – I’m going to be a lesbian when I leave this show. No because being a lesbian isn’t a choice. I wish there was a guy that I liked on the show. I mean I like everyone, everyone is amazing. Like a guy that I would be into. I wonder if I would be into David? .. No he was short. Nicole – you don’t know it though. I mean you know he was short but you don’t know if you would like him. Kemi – all our conversations were stand off-ish. He was cute. Nicole – he was gorgeous. Kemi – would you have showmanced him? Nicole – I’m not that type of person. Kemi – to showmance. On a personality level is there anyone here you would showmance? Nicole – I wouldn’t showmance any of them. Kemi – outside the house? Nicole – they’re all good looking men. Kemi – personality-wise would would you be attracted to? Nicole – Sam or Nick. Kemi – me too. They call Sam over. Kemi – can you tell me a joke. Sam – why do ghosts ride on elevators? Kemi – I don’t know why? Sam – Because it lifts their spirits. 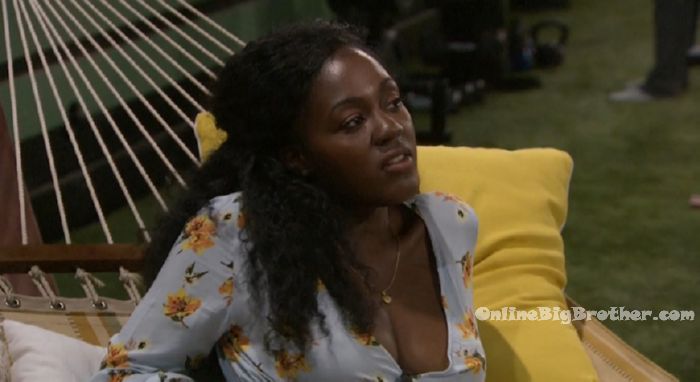 Holly and Analyse break a glass by the pool table.

Jackson to Kat – Just trust me when I tell you.. you’re safe. Unfortunately Ovi is going home. I say unfortunately because I like the guy. 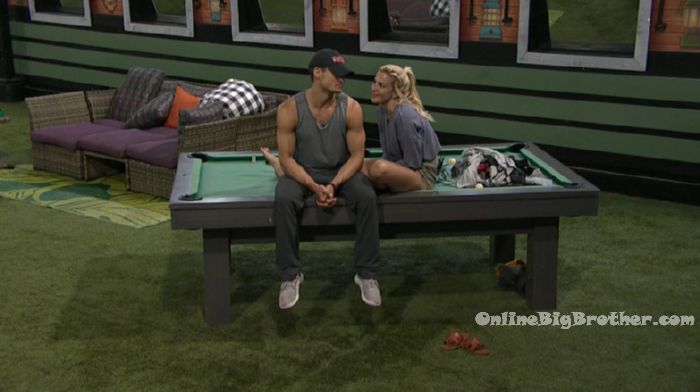 Backyard – Christie and Jack. Christie – speaking of kissing .. did you come close last night? Jack – no I didn’t want to. Christie – do you like her (Analyse) a lot? Jack – I think she’s great but I don’t know her. She’s not very much an open book dude. She is but she isn’t. She gets very nervous with me. SHe’s very cute, she’s very pretty but I am not going to just jump into something and hook up with somebody and be like f**k I just ruined my entire game for someone I’m not into. Christie – I said the exact same thing to her last night when she was like what do I do? What do I do? Because Holly was like what the f**k girl?! I wanted to go to bed hours ago. And she (Analyse) was like well why did you leave us alone?! I asked her do you see something outside of this game with him (Jack)? And she was like I don’t know. So I said okay then you don’t need to decide now ..take it day by day. 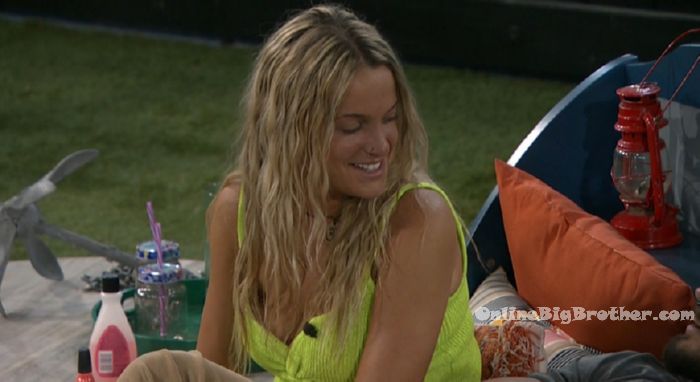 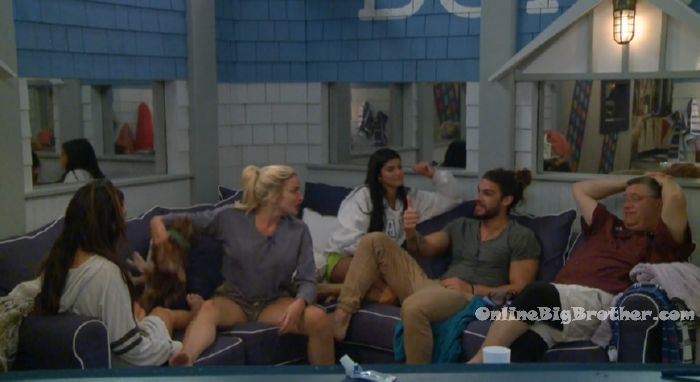 Wow so wait, Bella lives with her boyfriend, but is now going to start dating Nick? Yikes, hope the poor guy isn’t watching the live feeds.

The Voices in my head says...

Ovi is gonna win this season.

That was the most cringe worthy 8th grade-ish convo I’ve heard so far on BB. Ugh! This cast reminds me of some very miserable days in my life.

So let me get this right, Bella was upset at Nick for hanging around with Sis too much so Nick said he would no longer do that and told Bella he would only snuggle and be with her. Now flash forward a couple hours after having alcohol and we have Nick lying down sniffing the pits of Sis, yeah that will go over well with Bella… LOL