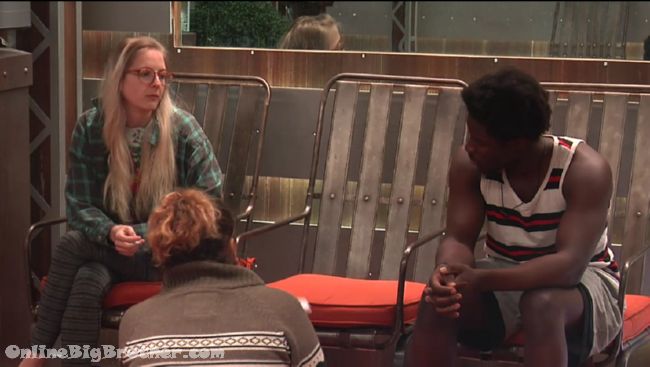 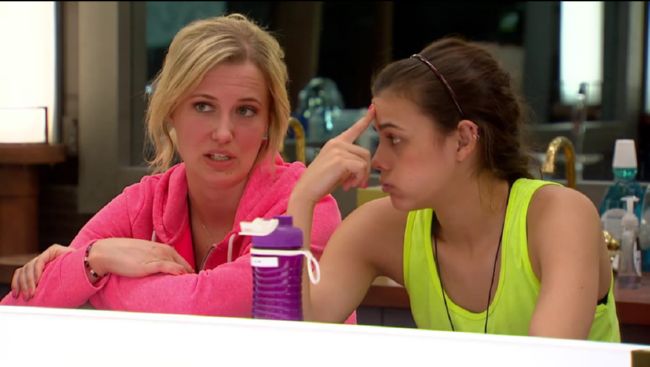 8:03pm bathroom Zach and Ashleigh
Zach wondering if they send someone other than Sindy home. AShleigh says Bobby and Sindy generally dislike each other.
Zach is torn about what to do with Bobby and Bruno says they threw the HOH.
Ashleigh thinks it’s too risky they should just take out Sindy, “Her staying is a really really bad idea”
Zach – But if Bobby really hates her..
Zach’s argument is Bobby and Sindy will target themselves instead of them.
Kevin comes in, Zach brings up how he’s worried about Bobby and Bruno thinks that Sarah got in their head and told them Zach is coming after them..
Pili joins them.. The Diapers thinks they should pull Willow in to their alliance so they have the numbers.
Zach points out that Sindy was originally targeting Zach and Ashleigh Not Bobby. she’s only targeting Bobby now that she’s on the block.

Kevin thinks they should take a shot at Bobby this week. Zach says they cannot trust Bruno and Bobby.
Pili – we’re going to back door either Bobby or Bruno

Zach – If Bruno is up against Sindy do we have the votes?
They believe they do have the votes to control who goes home.
Zach suggest they keep sindy and get rid of Bobby.
Kevin leaves.

PIli says she trust bruno but not Bobby
Ashleigh says they are the same player if you trust one you trust the other.
Zach – I can’t believe we are considering keeping Sindy
Ashleigh really doesn’t trust Sindy, “ I think it’s too soon”

ASh asks Pilar if Sindy ever talked to her about working with her and Kevin
Pili – No
Ash – that sucks
Pili says Sindy was first telling her to put Bobby and Bruno up.
AShleigh says she doesn’t want Bobby and Bruno to go to final 7 with them she would rather it be Brittnee and Sarah. bring usp how Cocky Bobby has gotten.
Ashleigh says they will put Bobby and bruno up next week and see how Sarah and brittnee respond.

Ashleigh thinks Bobby and Bruno will throw the next HOH because they want brittnee and Sarah to go after them.
Bobby comes by they tell him they’re thinking about Brittnee going up as a pawn 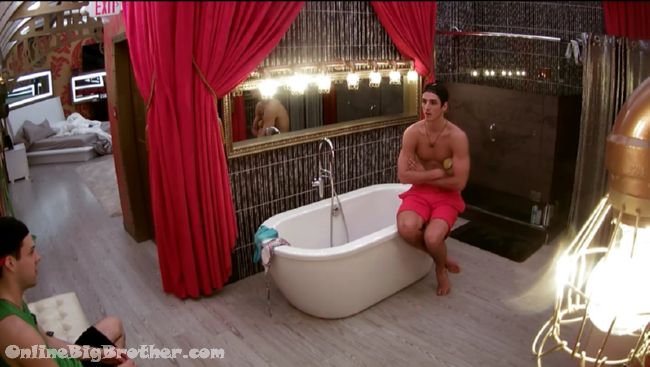 8:30pm HOH Zach and Kevin (Talking In Circles.. )
Zach thinks Sarah told Bruno and Bobby that he was targeting them last week. Kevin brings up the chance of Sindy really working it right now because she’s been pushing Bobby hard.
Zach calls Britntee and Sarah floaters.
Kevin wants to talk to Sarah and get a read on her
Zach wants him about Sarah “She’ll lie her face off”
Zach says Jordan was always saying how much he trusted Sarah and she was the one that flipped the house on him.
They think that bobby and Bruno are maybe being authenticate when they say htey are with them. At least for this week.
Kevin – I don’t think we should take a shot this week.. it’s authentic
Zach suggests they get rid of Sindy this week followed by Sarah then they take the shot on Bruno and Bobby.
Kevin says Bobby and Bruno are not that good at acting they want to work with them.
Zach is certain Bobby and bruno will throw the next HOH.
Zach – Bobby is not that good (To fool them)
Bobby joins them. Zach hints that he would want to target Sarah if he won HOH. Bobby says it makes sense btins up how strong of a player and threat she is.
Bobby says him and Bruno have a “bro” thing going on. Zach wants to call all the bros in and bring Godfrey in. 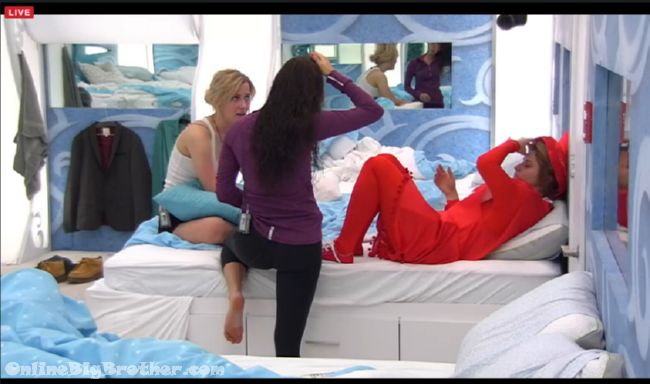 8:45pm AShleigh and Willow With some Pili
(Lots of rehashing talking in circles etc etc.. Pili and Ash want to pull Willow in with the Diapers.)

AShleigh says at some points Willow, Pilliar, Zach and Kevin need to get together and talk things over.
AShleigh says obviously Sindy needs to go because she’s a vicious beast in comps.

8:54pm Hot Tub Godfrey, Sarah and Brittnee
Forming an army against the Diapers. Godfrey swears bruno and Bobby are down with busting up the couples. Godfrey says he’s talked sense into him.
Godfrey – The only people that can’t win (HOH) are Zach and Ash
Sarah – Kev can either
Godfrey – that is true.. Willow
Sarah – Zach’s been playing all the f***g sides

God brings up Zach coming up to him saying if it’s double eviction next week they need to stick with the bros and take out the coasters. Godfrey laughs because points out that Zach put him up last week and he was a target. wonders if Zach has forgotten that.
Zach – he’s like Man we need to get the coaster out of her man we need to get out Brit and Sarah man”
Godfrey – “they are the coasters.. Dude you’re girls hasn’t won shit. I’m like Are you dumb dude.. ”
Godfrey reminds them that Zach has been wanting to get rid of Brittnee and Sarah for awhile.
Godfrey – Next week we gotta start taking shots at the other side..
God – Pils and Kevin cannot be that dumb they didn’t know about the chop shop
Sarah explains to him the showmance alliance is very important to them that is the main alliance all others are secondary.
God says if he got the DPOV (Diamond power of veto) he would put Zach up. 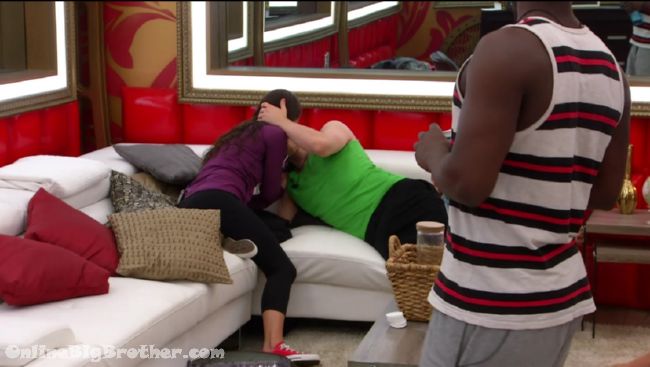 9:00pm everyone called into the HOH room

(The diapers are talking in circles they still sounds like Sindy is going but they are toying with the idea of flushing out Bobby’s Veto or Backdooring Bruno. Bobby and Bruno are pretty good at bull sh!ting Zach and Kevin)

I don’t see Sindy in the HOH, does anyone else see her?

Please just put Bobby up! He adds nothing to this game!

Come on Pillis flush that fake veto out

What the fuck? Zach is the BIGGEST floater in the entire house. He has been the one to float to every single side of the house.

It would be nice for Bobby to go up instead of Brittnee. He is completely delusional.

Whichever side wins this triple eviction will have the numbers to do whatever they want for almost the rest of the game.

While Zach has certainly used tactics similar to Floaters, he is not one. I love the Floater strategy, and am quick to distinguish it from the Coaster strategy (eg. people who do nothing, Coat-tail Riders, Free Agents).

Floaters are ultimately players who are only truly loyal to themselves (not a terrible idea considering only two people make the final 2). Floaters are active participants of the game. They have strategy behind their game moves, have strong social skills, and a blessed one is able to be manipulative.

Unlike a good Floaters (like say Jun, Shelly, Alison, and Andy) Zach and JP were VERY sloppy trying to play all sides of the house. A smart Floater would spread them self around the whole house and build strong relationships. If you notice in this season multiple HG’s have talked about someone or another has barely talked to them in 30 something days. A Floater would never do that.

Talkie talkie brought to you by the letter P…..production. B is the renom Cindy goes home. I highly doubt Bruno/Bobby are going to throw next HOH. Especially since its a double double. Tim Horton’s BB special! How’d the producers not sell that twist lol?
Wednesday will be fun until the HOH is crowned. From there on I fear the steam roller coming. BBG own the game after Wednesday IMO as I pick them as next HOH.

ashleig succeeds in talking ppl out of making a move that wuld be good for all of them.

this isnt BBCAN3….it is BBCANEXTWEEK cuz NEXT week is when everyone except SSB starts playing the GAME

By ‘good move’ do you mean allowing britt & sarah to dictate her HOH? Even after starting a clearly marked war last week by voting JP?

ashleig succeeds in talking ppl out of making a move that wuld be good for all of them.

this isnt BBCAN3….it is BBCANEXTWEEK cuz NEXT week is when everyone except SSB starts playing the GAME

I thought a couple of days ago that bobby would become the replacement nominee because he was so verbal about going after kevin for three weeks. I don’t understand how that’s been so quickly forgotten. talk of targeting kevin abruptly ends when his gf is hoh. strange how that happened and was just accepted at face value.
but i’m thinking that the diaper dynamic of sure thing not big move will impede that from happening. considering cindy going home is a good move for them and bobby going home is a good move for them, I don’t see them going past the easy move. a line was drawn? what line? no we’ll draw the line. later. at least that seems to be the way that things are viewed.
the more they talk about it the more I think it’s a weekend red herring and Britt will be the replacement.
i’m preparing myself for this because most weekend talk never really happens come pov ceremony. i’d rather not get my hopes up that something will happen while the diapers are waiting for godot.

Can someone please tell me why production is so against “Bruno and Sarah talking game together”? Haha, the apparent talk within the two of them during last weeks eviction happened during when the feeds are down and that is exactly what has happened again when Sarah spilled the beans to Bruno about the purple cobras.

another name
Reply to  Carlos

hey carlos… it’s a few hours later and I’ve been completely lost trying to find the video of that conversation. thanks for the info that it was on gold orange screen.
I still contend that production puts up a feed block every time a conversation that will be a plot twist happens. it’s a got to watch the episode moment that they can edit.
Bruno and sarah having an actual conversation?? was rod serling involved? twilight zone music should be put behind that one in the episode.