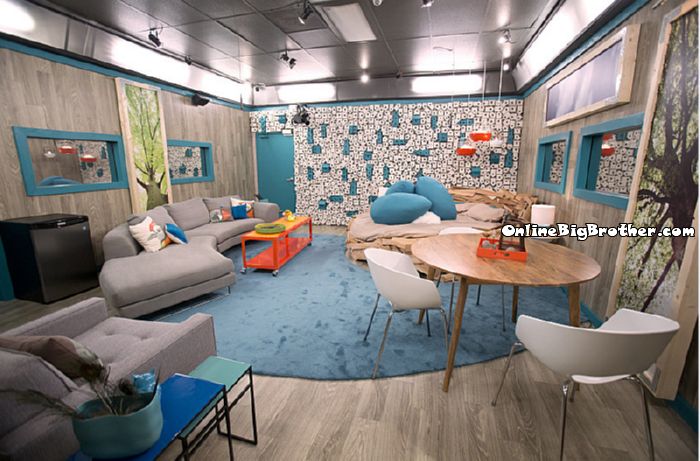 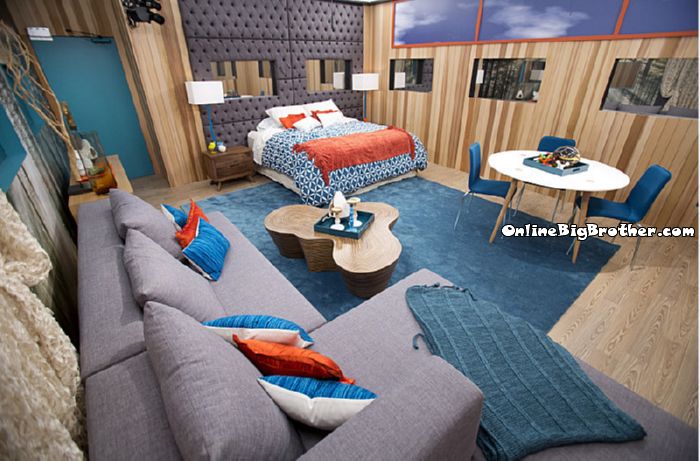 During last night’s premiere episode we caught a glimpse of the BIg Brother 16 House when the first 8 houseguests entered. We never got to see the backyard or the Head of Household room. Those will probably be shown on the episode tonight but for those who don’t want to wait.. In my opinion the HOH irooms are some of the weakest this season. It doesn’t really matter what the rooms look like unless it’s functionally uncomfortable it probably won’t impact the game.

The twist this year has 2 HOH’s so it therefore 2 HOH rooms, kinda like the setup they had in Big Brother 14. Theres also some clear shots of the “Wind Room”, “Fire Room” and “Earth Room” (Or whatever you want to call them) . The “Water Room” is the bathroom seen here. There is also the “Ice Box” havenot room which is sure to make this a cold summer for the havenots this season. We also get to see some of the fungi that is around the caves, really cool. Always glad to see the pool still has the duck. Has the benchpress been upgraded?

Next is Episode two where the remaining 8 enter the house and compete in their HOH competition. CBS released a video last that hints at the possible winner. Followed by the live feeds starting. Try It Free! Get 24/7 access to the house PLUS more for 48hrs before you decide!

wasn’t there a door with a hallway leading to the second bedroom beside the hoh bed, opposite the main door? can’t remember, the bb14 mentor season seem’s like ages ago…

I just realized something… The Windmill room is where the have not room should be. right behind the open bedroom at the end of the hall. Well then i was looking at the Have not freezer room pictures. They have the same “outsoor” lights on the one wall.
I guess they’re going to make them feel comfortable for the first week or so and switch it up on them.
Clever!

I’m pretty sure they had to add it on somewhere. The map of the BB house leaves nowhere for an extra HOH room.
http://www.onlinebigbrother.com/big-brother-compendium/big-brother-house-floor-plans/

Hey Bill! .. The 2nd HOH room is the Pandora’s box room, it was also the second HOH room for the coaches season. Its where the coach would sleep when one of their people on their team won hoh.

So do you have to go thru the main HOH room to get to the Pandora’s Box room? Cause that could get interesting as secret HOH meetings get walked in on by the other HOH….

Hey Simon or Dawg what happened to where you can read about what the house guests are doing through out the day & night like when they’re are in the back yard talking.. or are you guys waiting until after all the house guest enter the house?

Hey Nikki, The live feeds haven’t been turned on yet. They go live tonight at 10pm. Simon and I will be doing our regular live feed updates as soon as the live feeds start ;)

Dang Poo Poo is a dingbat