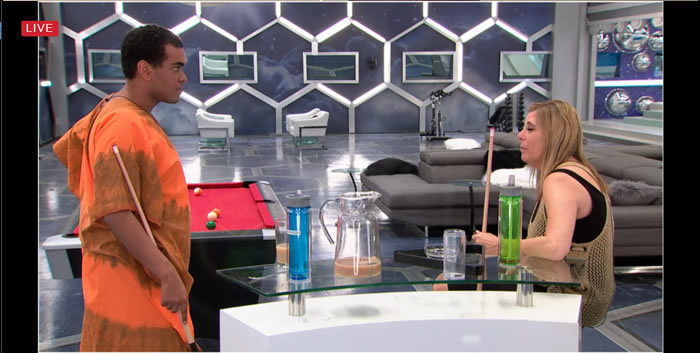 Cassandra says Bruno is trying to buddy up with Demetres. says the target is going to be Ika/Demetres, Ika/Dre or maybe Gary.
Gary doesn’t think he’s a target he thinks he’s OK.
Gary says Ika isn’t fully off board to keeping Cassandra, “She’s wavering”
Cassandra says if they have Ika then Demetres will follow.

10:02pm Gary and Karen
Gary says Cassandra thinks she has Karen’s and Dre’s vote. CAssandra is unsure about Iak because yesterday she told her she doesn’t have the votes.
Gary – just in case she’s a hog that comes back let’s’ not be too nasty.

Gary warns her about Bruno and Kevin they will turn on her. Points out that Bruno is trying to reel
Gary – Neda is walking around here like she is the queen sheba and it’s pissing me off

Karen says her target will be Kevin
Gar – I think you should put up Sindy and Bruno
Karen – I can’t put up Sindy
Karen – she helped me win that HOH I would not consider Sindy
GArty – just as much as you like Sin I like Kevin.. I can work on him
KAren – I would rather Bruno than Kevin
Gary – I have a bridge with kevin
KAren – Kevin is working with everybody.. Don’t be fooled by your silliness right now
Gary – Kevin and Dre? ..
KAren – she’s not playing game with me I don’t like it
KAren – Emily or Kevin and if one of them comes down Dillon

KAren – I have to take out Jackie next (Good god Karen you’re all over the place)
Gary – Kevin’s a target for later.. And I need my silly time

Gary says Dillon, Emily, Kevin, Neda, Bruno and Sindy are working together and they are trying to pull in Demetres.
They both think Demetres won’t flip on them.

Gary – the people with the mind on that side is Neda, Kevin and Bruno
She’s jack Nicholson on 1 flew over the cuckoo’s nest she got a lobotomy
Gary – she’s defeated she’s not as strong as she used to

Gary mentions that they are not the only ones that want to keep Cassandra. (they go back and forth on this)
Karen says 2 days ago Cassandra was trying to get Karen and Jackie nominated. Karen says Cassandra is “Gonezo”
Gary agrees adds that it’s hard to let Casandra go because she’s part of the family
Karen – she slit my throat.

Gary – I’m not going to lie for you i’m not 100% for Cass to go
Karen – how are you going to get the numbers
Gary says he’s not going to hustle for teh numbers but if Cassandra hustles the numbers he’ll do it.
karen – that’s going to hurt my game
gary – the house is already split
Karen goes on about how she’s the target if that happens.
Gary – If CAss gets Dre William, Ika and Demetres.. I’m telling you I’m voting for her to stay.
Karen – we would all become instant targets that wouldn’t be good game play (Karen you’re the worst)

Gary says the other side doesn’t know the power of the underdog.

10:12pm Ika and Dre bathroom
Ika says Gary’s name is getting tossed out a lot because of Neda.
Ika – She talks too much (NEda)

Ika says Dre needs to talk to Kevin and Bruno.
Dre – so I need to kiss Neda’s a$$
Ika – girl kiss that a$$
Dre – that’s not my character
Ika says that wasn’t my character season 2 that’s why I went home week 4
Ika – you need to go in there and you need to make her believe she’s the person you trust in this game and you will never go after her.

10:30pm Dree and Cassandra Bathroom. Cass – Gary is convinced that he can convince Ika to vote for me to stay. Is he full of sh*t? Dre – he’s full of sh*t. Gary’s telling Ika that she needs to let you go. Cass – he’s telling ika that? Dre – yeah .. he’s full of sh*t. I don’t want to hurt your feelings .. Gary is full of sh*t. Cass – F**k, I look like a dummy. Dre – you don’t, you don’t. Cass – he said that he was working on Karen. Dre – ok, then maybe he is (campaigning for Cass to stay). Csss – I think it’s Neda that doesn’t want me to stay. Dre – can you see if he is working on Ika. Let try and test him. Cass – he (Gary) told me that he was almost convinced that he could get her (Ika) to switch back over. He has been working on her. Dre – do you think she’s lying. Gary’s too good. He scares me. I am trying to figure out if Gary is actually campaigning or if he is full of sh*t.

10:37pm Dree and Neda HOH. Dre – I wanted to come and talk to you. I already talked to Ika. Yesterday when you told me the information I was a little bit shocked and annoyed. I feel like it was because in this game I trust Ika and I trust you and I trust William obviously. I feel like you guys are my people. And I told you that I was going to befriend Cassandra because I thought she was shaddy and I wanted to be close to her. When you told me about the stuff with Gary I obviously felt a little hurt because I felt close to Gary and I couldn’t believe he would say something like that about me. I feel like it was to save his a$$ which is annoying. But in a sense I felt like you guys didn’t fully trust me. That’s why I was like wait what?! I still feel like I can trust you 100. Maybe getting close to her wasn’t the best decision and I even wondered is this going to bite me in the a$$. Neda – what threw me off was that after she was nominated you guys were still like I don’t know .. and it felt like I don’t know.. It was just the vibes maybe or something. Dre – I feel like I put trust in him (Gary) when I shouldn’t. I don’t want to hurt you feelings but.. he doesn’t like you. Neda – no, I know. Dre – he did tell me that he doesn’t like you. Neda – I know. I’ve heard it from several people. Dre – I’m not going to confront him but I feel.. Neda – betrayed. Dre – yeah. I fully trust you and I fully trust Ika. You obviously know I’m not coming after you.

10:49pm William and Cassandra
Cassandra says in Neda’s own mind she’s already won
William points out that Jury is not that far just 2 weeks away.
Cassandra – you need to be careful about Kevin.. he’s using you

Bruno and Dre in the havenot room. Bruno about Cassandra – I gave it to her the way it is. I don’t want to say it was a waste of time trying to convince me but she knows its not going to happen. She can go and talk to other people. I just think she’s rubbed a lot of people the wrong way especially the people on the block. Dre – she did, she did. Bruno – the last couple days the things she’s been saying… at the end of the day she did it to herself. Honestly when I walked in the door .. I never met her before .. no actually I did at her finale but we never really talked. When I saw her I was like this is someone I would be excited to work with but for some reason she just totally went the other way on me. Dre – she did walk in with a big target as well because we know her strength is like being social or whatever. …but I’m not someone who is going to be easily influenced.

11:51pm Karen tells Cassandra she’s not staying. Cassandra says she knows she feels it in her gut.

12:30am Gar Ika and Demetres poolside

I will never understand why Canada voted for a vet to get the safety until Jury?! This is already their second chance. Neda just showed her true colours this week with all her bitchiness. She hasn’t stopped bad mouthing former player’s game play since she has been in that house. Her bright idea this week is to take out another vet and be down a number, and we all know big alliances early in the Season never last! That’s BB Rule #1 !!! Yes keep Jackie who will float to whoever has the power and doesn’t know who she wants to nominate. You are just asking for trouble keeping her around. Yes Cass is manipulative, but she’s a number you can work with early in the game. Bruno will never stay loyal to a woman in an alliance – If Neda had half a brain she would have learned that from his Season. Neda will be gone in 2 weeks.

Neda overplaying her cards can’t wait to see her face when she gets nominated.

Substitute Ika’s name for Dre’s and you have a second Naughty List !!! – Dre and Ika are spread pretty thin through out that house right now. Kind of reminds me of a little bird named Mitch. Only a matter of time before people figure it out especially with Ika – Except Gary will blow her game up if he is up on the Block ( or maybe before that ) and she does nothing to help. Which gives him a lot of power at the moment. Because if Ika falls so does Demetres by association and the SIX alliance members, including Neda.

I’ll be so sad to see Cass go, she’s one of the most entertaining houseguests. I really hope they bring her back for an All Stars season in a couple years when she’s had more time to reflect on her game. As for Neda, I know she has a lot of fans but I’ve always found her totally phony and completely over-rated. All her self-promotion this season only confirms that for me.

I understand why Neda would target Cassandra. If you know someone’s strength in the game is manipulation, and you know that person is not on your side… why wouldn’t you get them out of your way? Logically, if Cass is against Neda, then Neda should target Cass.
With Neda being a member of the six, and using Dillon and Emily as a shield on the side, the nomination pool consists of Cass, Jackie, Dre, William, Karen, Gary. The two people with the sway in the house to start a counter movement are Cass and Gary. Which one has already begun to build the other side into a group, in Neda’s mind: Cass. Targeting Cass is the best move Neda could make for her game. Sure, I think Neda is taking a bit too much pleasure in getting Cass before Cass could get her, but shoe on the other foot, I’d be saying the same in reverse.

let hope that gary or karen or cass get hoh nerxt week!