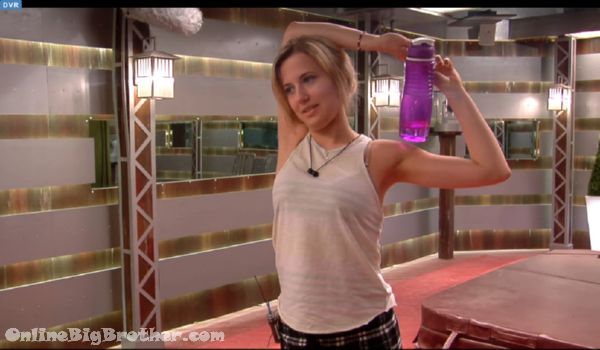 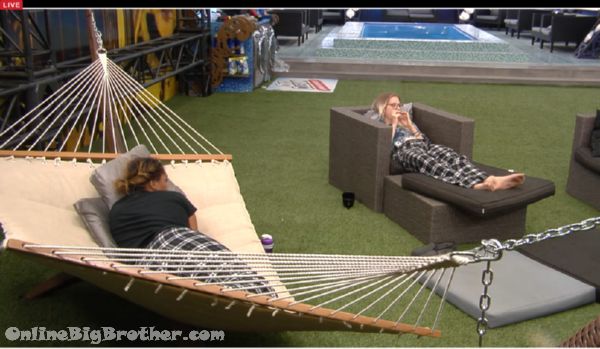 9:29pm Backyard hammock Brittnee and Sarah
Sarah says the boys only care about themselves. Willow joins them they point out she looks very sad. Ashleigh joins them 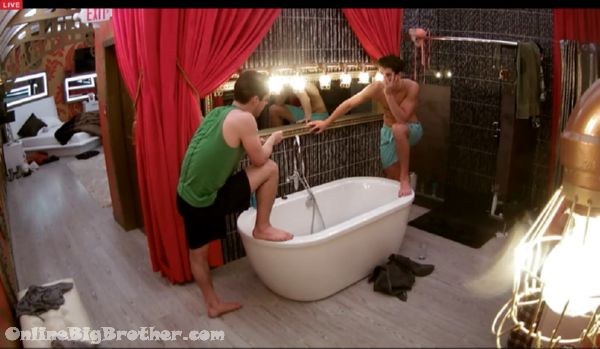 Kevin doesn’t want Bruno to know he was the replacement nomination if Bobby had a veto. Zach mentions how Bruno was talking to him pushing that the girls Sarah/Brittnee are the targets.
Zach – He’s really not concerned about you now.
Kevin says Bruno thinks he has the votes.
Zach – he hasn’t mentioned a thing with me.. i was just out there with Willow,Bobby and AShleigh and he didn’t say anything
Kevin – Worked out today
Pili walks in
Kevin – Hey Peels peels
Zach says Bruno is going to try and latch on to him and Ashleigh.
Kevin – Keep feeding him say we’re worried about B and sarah
Zach – I would like to win this HOH
Kevin – of course you’ll have to beat Pili
Pili says they’ve controlled 3 HOH’s in a row
Ashleigh rolls in they say with Bobby leaving their chances to win an endurance has skyrocketed.
Kevin says he’ still has processed everything that happened today. 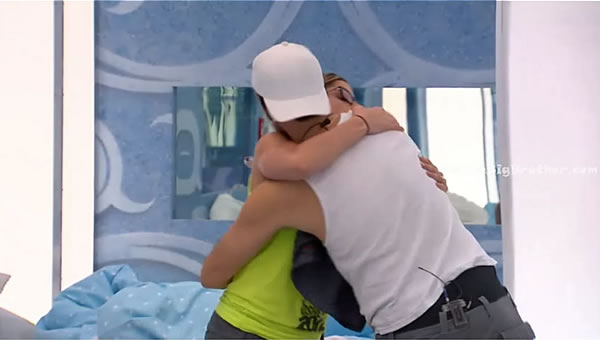 10:03pm Bruno and Willow
Bruno tell her she doesn’t have to worry about him he’s just trying to find out how keep this plan was.
Bobby rolls in. Bruno says Godfrey made a deal with kevin saying ‘I’m not coming for you i’m going for Zach”
Willow tells them that Kevin told Brittnee he was going to pull her off, “Why would you even say that to her” 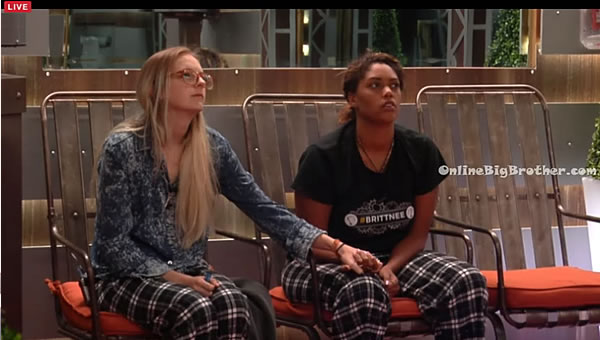 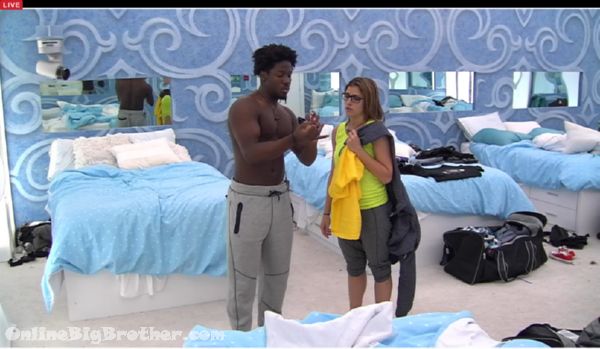 10:09pm Godfrey and Willow
Godfrey syas he’s not cool with Zach and Ash but he’s cool with Kevin and Pili tells them 100% if he wins he’s putting them up. 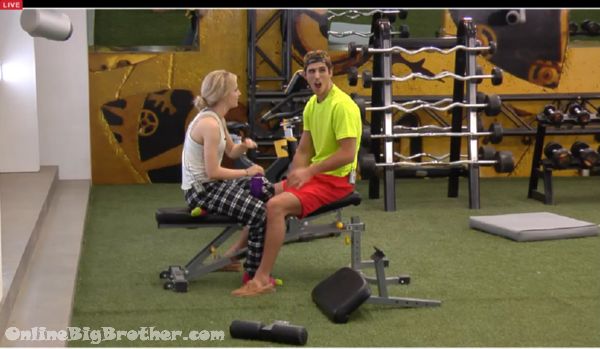 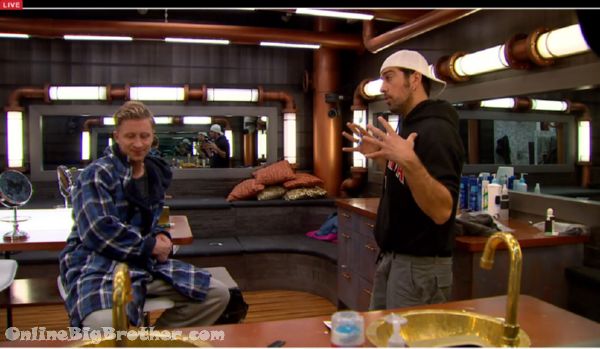 10:16pm Bobby and Bruno
Bruno says Sarah wants to keep all the girls till the end. He knows if he’s up against Brittnee Sarah will vote him out. 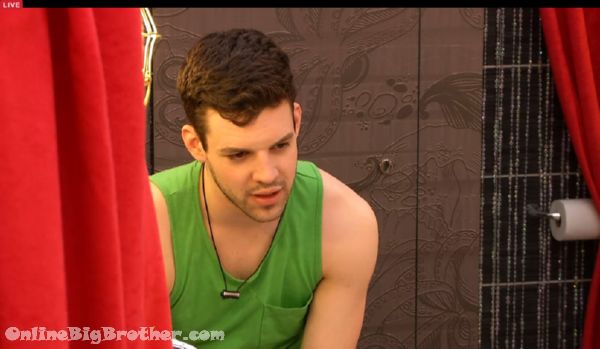 10:18pm HOH Kevin and pili
kevin – this week turned out really good for us

Maybe its just me, but watching some of these people makes my brain hurt.

Sarah brittnee and willow are fooling the guys really well

I am as well. Quite curious to see how the triple plays out.

Bruno is really irritating. I think the guys this season have been useless.

Yes, the women this season have been really strong and making strategic moves NOT crying at all or whining or being catty and not at all looking for showmances….

Oh definitely! Bruno turned into one of the most annoying floaters this year. His conversations reduced to permutations of, “I got you, man!”, “I’m 100% with you on this one!”, “I love what we got!”, “I got your back 100%!”, “We need to get those girls out!”, “Those showmances are dangerous yo!” — ad nauseam.

interesting late night chat by the pool between sarah and Bruno:
I don’t want it to sound like i’m campaigning against B but… x7
I know what you’re saying but I don’t know if I can… x7
you’re a smart girl, you know what we have to do x3
i have to talk to willow first and see what’s happening x3
so good that we can be honest with each other
that’s what an alliance is all about
no matter what happens this week we’re good
no matter what happens this week we’re good
and both of them walk away with smoke blowing out their asses.

Although I want Brittnee to stay (because Bobby is annoying as hell), I hope Sarah and Willow evict Brittnee as it’s much better for their games.

another name
Reply to  Argai

Zach has been a lost puppy without JP. He’s so scared of everyone. It’s kind of sad.

Zach has flip flopped the whole game and is scared to make any strategic move. In fact all the guys are scared to make a move. I would love Godfrey to win HOH just to see if he will make a big move because I really think he is the only one with guts. Zach, Kevin, Bobby and Bruno have all wimped out during theirs.

I really hope Bobby goes out this week… I love Brit as a person, not as a player, and bobby is useless in both contexts…

No Deal
Reply to  Ozzy

I really like Britney, and she was in original in my top 3…. However, I dislike Kevin’s Character way more. It would be absolutely delicious if Bobby stayed. The look on Kevin’s face would be priceless… and his BIG SEXY MOVE would be evicting B.

Whats sexy Kevin, is if you would’ve put up Bruno! That way someone strong would leave, but its too early for that I suppose :/

The diapers keep on winning comps but end up poopin the bed… LOVE!

Favorite line of the night….Zach trying to teach Ash the provinces & capitals-alright people are watching, we better stop, if we want you to be able to get a job again…..too funny, the girl is just so clueless

Love the noms this week, would have liked Bruno up there but, fairly certain Bobby’s leaving so that works for me…but, with this triple eviction on Wed. Kevin & Zach are gone if the DA doesn’t win HOH… Sooooo glad they are finally cluing into Bruno’s games…..Can’t wait for Wed.

so the only time we trust what Sarah says
is when she talks to willow or Britt?

Yes I said it

Ugh. Willow is like that annoying gnat that just wouldn’t go away.
I’m surprised more people aren’t on to her game play… Especially those leaky diaper alliance.

Carlos
Reply to  Yes I said it

The diapers have been so unaware of what is happening in the house. They all think that their alliance is so discreet and that everyone else is targeting each other. The only thing they got going is that they are winning HOHs but once their streak ends they are on their way to jury.

Frenchie
Reply to  Yes I said it

They all tolerate Willow because she’s just not a threat: they all know what she’s doing (telling everybody “I’ve got noone. I’ve only got you!” then saying “I SO want to win HOH” then throwing every comp so she doesn’t have to pick a side).
I had to laugh when the sunday tv show showed her in the DR saying “I’m playing both sides. If they knew, I’d be in trouble!”
Guess what: everybody knows, but she’s just not important enough to waste an HOH on her. Sadly for the viewers. :/

if I were Bruno, i’d perhaps be more careful in what I say.
before nominations he said to every other outsider ‘they aren’t after you girls, they’re after us guys, you’re sitting pretty.’ each time it sounded more like a condemnation than a congratulatory comment.
after the pov he goes from guy to guy to guy saying the women are getting us to pick off each other so that they can ride easy street to the end. he says this in a fishbowl where everyone tells everything that can be used against someone. instead of trying to convince them to keep bobby directly he’s trying to enhance paranoia about the girls. he even says it in front of Ashleigh (who is Zach’s second mouth, but female).
1/2 of his current alliance is female. facepalm.
at the end of the day he says ‘I don’t want you to think i’m against you.’
good luck with that. even if its just persuasion tactic and not his inherent belief. eyeroll. good luck with that.
while he was lying in bed eyes wide open like a suspicious owl for an hour after everyone else went to sleep, think he was wondering if half the allies he made into human speed bumps all day will even consider voting to keep him if he goes on the block?

Why does a lot of folks on here still think there’s a loose tile hidden veto in the have not room?
1.there isn’t any lose tiles.
2.the tiles you think are lose are the trigger for the air horns and red lights. That’s it…that’s always been it.
3. They wouldn’t make it so obvious…and it would be favoring also. For secret veto there would have to be a clue found…then another…and we all know full well….the trail would end in the vault 1 hundo % !

another name
Reply to  MrJWall

in the promo video and first episode arisa narrates that this season a super power is held in the lowest point in the house. in the have not room, the floor opens and a podium rises.

MrJWall
Reply to  another name

Ah I must a missed that….thanks another name.

I missed the origin of the (annoying) ‘diaper alliance’ name. Can anyone help me out?