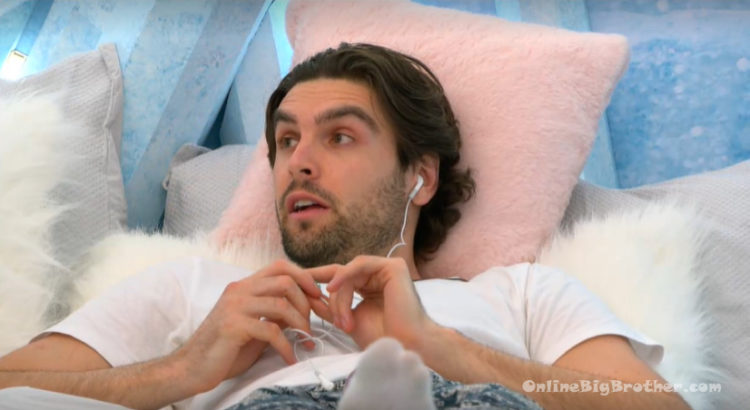 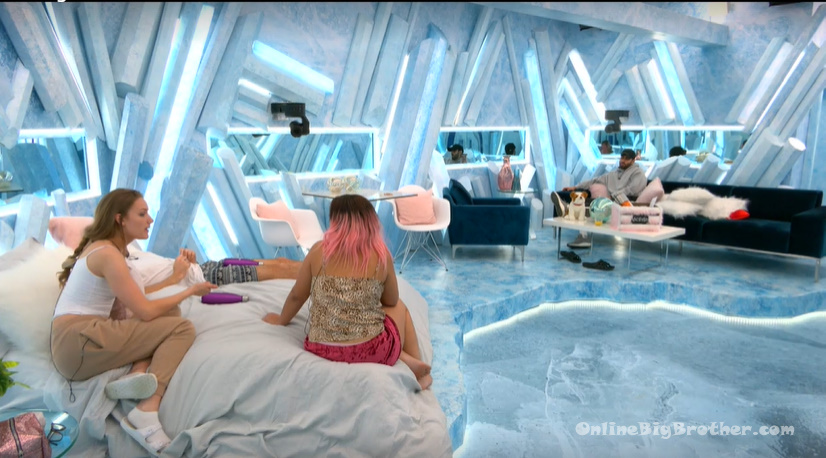 1am HOH room Victoria, Kyle, Beth and Rohan
Victoria – its sucky like you just don’t want the blood on your hands. I just feel like he threw me under the bus and Latoya has the history of flipping. Like its just good for my speech. Beth – yeah like that was f**ked. Victoria – it didn’t have to go down like that. Beth – I was so upset. Victoria – girl I know you were. Rohan – so like break it down for me Beth. Like what happened last night? Beth – last night .. was it yesterday when you and I had our chat in the morning? Rohan – ah.. yes. Beth – there was no doubt in my mind. And not because it wouldn’t be crazy like this .. and I even said to everyone .. because obviously everyone was considering both sides. If it is going to be a thing .. it needs to be decided TONIGHT .. and there is no bullsh*t.. no bullsh*t in the morning. We went to bed last night .. JOSH.. there was no question about it. There was no reason for you to be considered. So this morning .. 20 minutes before .. I was one of the last to know .. I was doing my hair .. everyone was going back and forth. I don’t know I get annoyed because I was expendable in this game. I was kind of upset with you today .. This vote is going off literally one person.. it was one vote away. It wasn’t unanimous. I was upset. I was like why isn’t Ro coming to talk to me? It was one vote off. Josh wasn’t coming to talk to me. That’s why I sat down on the couch with Austin and was like f**k it .. Josh is going home. And I was like you’re going to be the deciding vote Austin. It was unanimous. Victoria – It was unanimous because I didn’t do it and I was the swing vote. We were just not feeling it. Like that was not the plan. And it was because of Latoya. Latoya was the one heading it. She wanted you gone because she thinks that you two were going after the girls. Kyle – which is something she made up obviously. Rohan – You have to tell us who made that up because we don’t know.. we don’t f**king know. We just found out about that today. I didn’t know I was going after all the girls .. like that was news to me. Kyle – we laughed. He is coming after Tera and Tina and I am coming after all the girls.. it what we heard. Beth – I pulled you (Kyle) aside and got nothing out of you. Beth – straight up! The only reason why I wondered if that could be true is because you would never talk game with me. EVER! You have never approached me. Kyle – so we have chats .. do you want me to tell you everything and you tell me nothing?! Does the chicken or the egg come first? Beth – I tried to talk to you. In that room I was giving you everything and were giving me nothing. I am allowed to be honest about this.. like do you want me to keep this stuff secret? Kyle – no but it is frustrating. Victoria – it was f**king Latoya that spearheaded the flip and because she really believes you guys are going after the girls. And that is why I need her by Keifer because I do need a flip on my HOH. Beth – I was absolutely listening to both sides but Josh was out to get me so that is why I decided to vote him out. Kyle – its big brother. Rohan – I heard 6 things about me that I didn’t even know .. like sh*t is just coming out of thin air. Victoria – it ain’t us. You guys aren’t coming after us right? Ro and Kyle say no. Rohan – I hate the girls vs boys thing. Kyle – so are those the two that are making stuff up about us then? Beth – I wasn’t told anything. That’s why I can’t tell you what the guys or girls are thinking. Kyle – me neither. 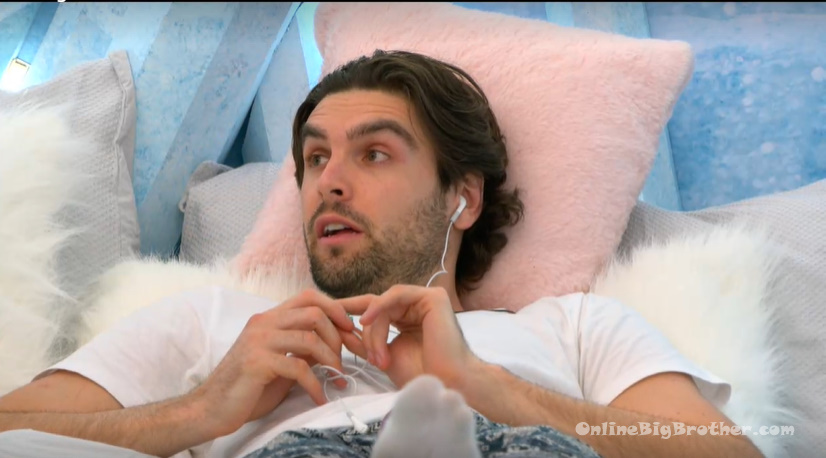 HOH room. Victoria and Beth.
Beth – you know I have you Vic! Victoria – I have you. You’re not worried are you? Beth – no I trust you. Victoria – okay, because you’re totally good. Beth – I don’t want to take advantage of your HOH .. this is your HOH. Victoria – thank you. Beth – make sure your eye’s aren’t closed.. That’s all I will say. Victoria – am I missing something. Talk to me .. do you think I’m missing something? Beth nods her head yes. When have those boys (Kyle and Rohan) ever talked to you? When have they ever given you an any information. Vic – I feel like I talk to Kyle. Beth – he doesn’t talk nice about you. Don’t make any moves now just remember that moving forward. Be very weary of what you tell Tera because she is all over the map. I need you to go far in this game with me. Vic – I want to go so far with you. In this moment I feel like those are the two best people to go up. I love that you’re telling me this .. because I need more eyes. 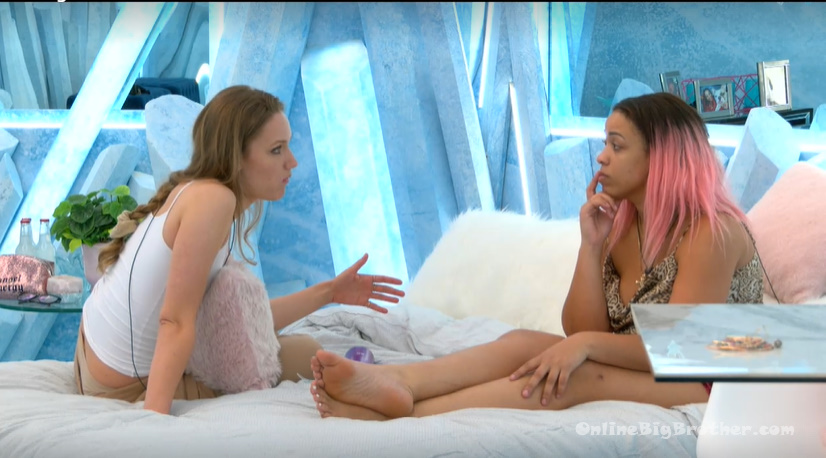 The fun begins. THAT IS ALL THE LYING…

Why was Rohan and Kyle sleeping beside each other in the same bed? Are they homosexual?