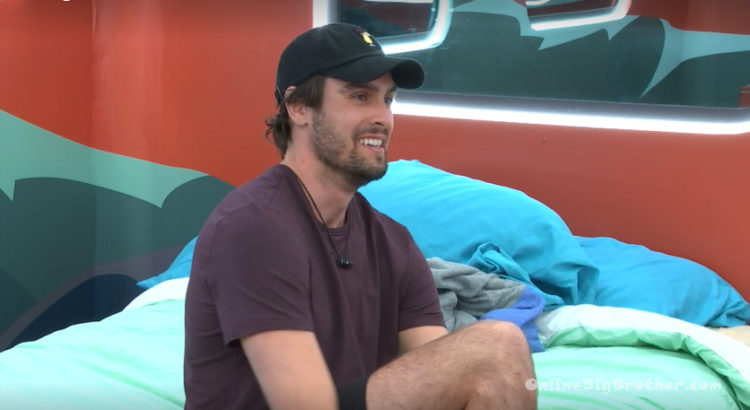 Head of Household: Victoria
Nominations: Kiefer and Latoya
The Power of Veto Players are : Latoya, Kiefer, Austin, Ty
POwer of Veto Winner : Jedson
Power of Veto Ceremony : Jed did not use the veto
Have nots: Kyle, Ro, Breydon, Austin, Jed

For some reason, the veto ceremony was Sunday and not Monday. Jed did not use the veto Kiefer and Latoya remain on the block. 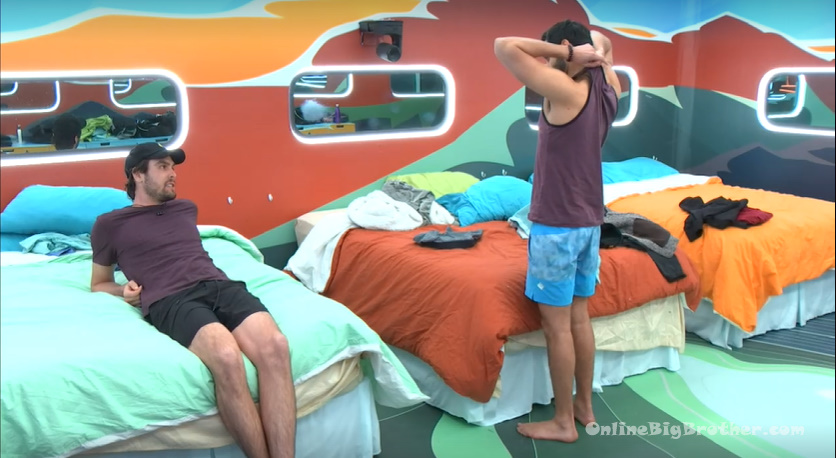 11:40pm Bedroom. Kyle and Rohan
Rohan – I just apologized for lying to some people but I didn’t apologize for what was said or what was done. Kyle – oh man I am going to roast LT in the thing. I just don’t think they know what they’re doing to themselves. Every single lie they tell makes the 7 stronger. Rohan – this is the 5 right here. Kyle – yeah.. if Tina and Tera f**k us this week.. I’m going to snap!! Rohan – no, you know Vic needs to go.. I am going to tell Vic to really work on them because there is only so much that we can do. She needs to go and tell them what they did.. like in that room the four of them. Like not like we tried to form a final five or anything but again they tried to vote tera .. again they tried to vote Kyle.. to flip Kyle as a replacement.. Kyle – she just has to get tell them exactly what she just told us. Rohan – and tell them that they’re straight up bullies too. Like Tina is not going to stand for that sh*t! Kyle – no. And what they’re doing is much worst than what we’re doing. The four of them going into a room at once. Did you hear what LT did? Vic was saying something to her and kind of spoke out of turn and LT was in the middle of a conversation and said EXCUSE.. Big Brother cuts the feeds. 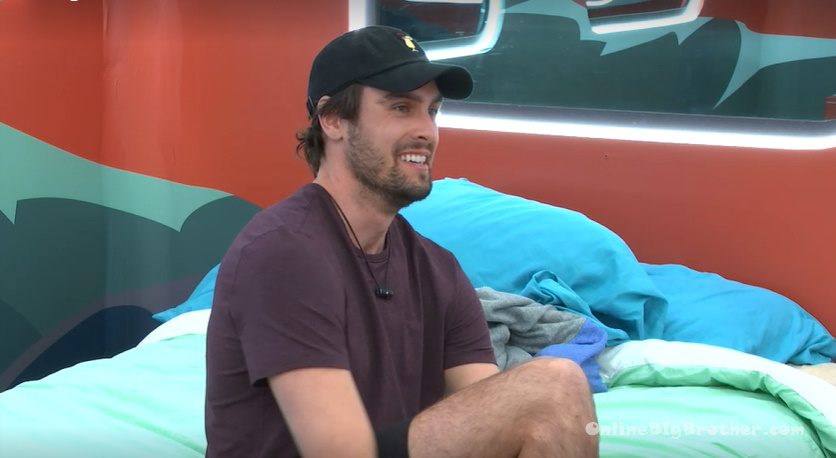 12:35am Bathroom. Beth, Tychon and Jedson.
Jedson – before I went out there I heard them scheming and sh*t. I couldn’t really hear that much but I heard them talking about you (Tychon) and I heard them talking about Latoya. And I heard them talking about me. Tychon – what were they saying. Jedson – I really couldn’t hear much. I heard Latoya, Latoya, Latoya .. and then a couple f**ks .. you know what I mean? I think they might be just sh*t talking. They were like I don’t think Jed is in the drivers seat but .. something something, something. They were clearly talking about us three. Tychon – who? Jedson – Ro and Kyle. Tychon – F**k! Don’t worry.. don’t worry they’ll have their day. Jedson – no it doesn’t matter .. you have to win sh*t to do sh*t! They ain’t going to win sh*t! Tychon – they’ll have their day. Jedson – She is like annoying me around them. Its like they je*k each other off. Tychon – it would be so much more fun if we had control of that room. We should have gotten rid of him when we had the chance. I knew it would be annoying but I didn’t foreshadow it being this annoying. Jedson – its like so annoying. Tychon – Had I known I would have been fighting more .. we’re doing this .. we have to. 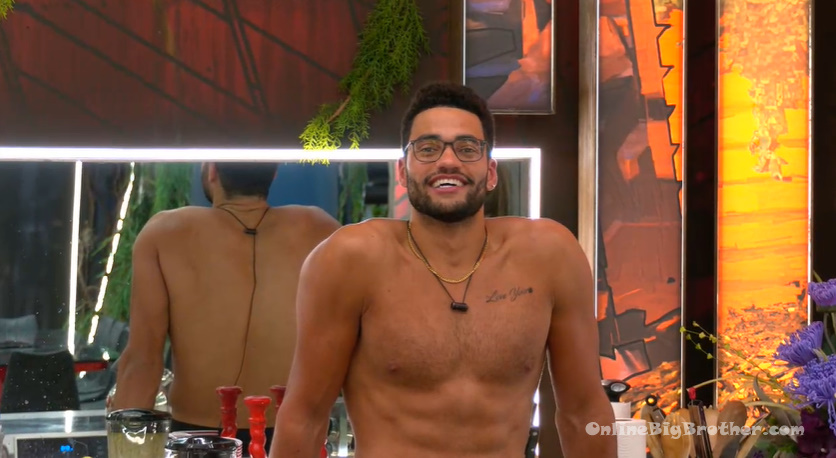 12:40am Tina and Tera.
Tera – I almost wish we could reconfigure the rooms. Better keep ours because we’ve got the numbers. The more I hear though .. the more I think.. they’re so sketchy. Like Jed, Ty and Beth. Tina – yeah. I still don’t fully trust Kyle and Ro but I am okay with that. Tera – that is fair. Tera – I trust them more than the others at three. But its still a game .. we can’t be kumbaya with everyone. Tina – lord no. Tera – what would you do if Julie and Josh came back? Tine – I don’t know but it would likely be more numbers for our side. 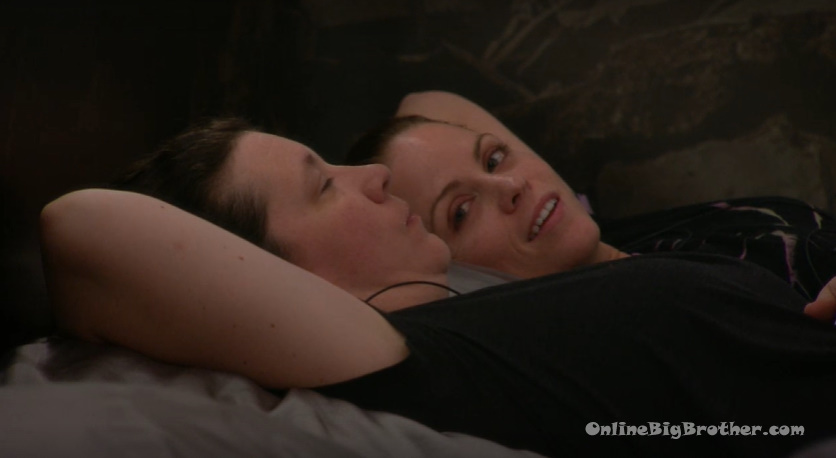 Yesterday was so fun!
Best rollercoaster ride on feeds we’ve had in a loooooong time.
I bet half of the social media base was screaming NO… the other half YES.
I enjoyed popcorn.

It makes me think they should have a special episode, and just play an edit of day three.
There is a reason I say this. EVERYTHING that has happened in the house in terms of game so far is directly linked to day three.
1) That’s the day LaToya voiced Julie had to go. We’ve seen what happens once LaToya decides.
2) That’s the day Josh had his infamous meltdown.
3) That’s the day Vic first thought LaToya’s attitude towards Vic was going to be a problem for her (as revealed in a conversation with Breydon, Vic believed LaToya was being obviously and intentionally rude and dismissive towards her in front of others).

I don’t remember the last time we watched an actual game of veto chicken. The sunsetters blinked and swerved. First sign of actual adversity in the game, and the alliance has lost their minds.
We’ve got Kiefer, mad that he might stay. We’ve got LaToya feeling a loss of control (oh this is going to get…), we’ve got Jed chest thumping and throwing copious amounts of toxic masculinity around like it’s his signature scent, Ty (the calmer one) pretty much shitting himself, Beth squawking like she was the prize hen, then learning she’s been sized for a bucket with eleven secret herbs and spices. And Tina… Tina has been excommunicated on the same day she’s jumping.
How much, by the way, that one of them decides they’ve got to pull Tina back in by guilt and maybe threat to ensure her vote and undying loyalty? First impulse in that alliance’s discussion has always been ‘let’s threaten them’, or ‘let’s go in there and show them our numbers, and that we control the house.’ Intimidation and threat is their go to first impulse EVERY time they discuss what to do next in the game.
btw, I know this may sound a little weird: Jed made my nope list. Not really going to elaborate much, but a few more of the things that came out of his mouth yesterday just made the decision for me. By somewhere around 1am, I’d decided. Can’t and won’t even try to be supportive of him in the game. My original impulse nope (the houseguest that my gut instinct on reveal day says nope about) didn’t even make it into the house, So I was hoping maybe I would only have people teetering on the nope list (Kiefer has been in that spot twice, Rohan once and Tera once), but Jed’s it. I won’t with him.
So there’s that.

IF production throws a secret room / secret power / previously unannounced twist into the game in the next 72 hours I’m calling bullshit. Especially because I HATE it when houseguests look into the camera and say “help us canada”. fine… where’s my cut of the prize money? No? Help your own damn self.
I figure they already did their own little Paras edit, Beth, a HUGE solid by bumping up the Veto meeting before she was able to talk her own ass on to the block.
Oh, we all remember Season 6. Every time an HOH would say ‘i want to nominate Paras’ in their Thursday night deliberations, they’d be called down to d/r for a half hour, come back and change their mind immediately with absolutely no explanation. For weeks in a row.
The minute Beth originally ‘volunteered’ in the heated discussion before the confrontation with Vic, i get the feeling a prodogremlin was on the phone saying ‘one of our showmancers is doing something stupid… what do I do?’

But regardless of my TINFOILHATCHAT conspiracy theory… yesterday was great.

a few notes over morning coffee. i know it’s technically almost not morning. I’m still one hour behind in my habits.

Cheers everyone.
Wait… did Jed just say maybe we should have a house meeting to expose Victoria??? do I have more popcorn? I’m not sure if he’s being serious….. or if i heard correctly….

This is the week in season 7 where Damian found his way back into the Leon’s Lounge to get secret information on two houseguests.

Big6
Reply to  another name

Thanks for the recaps!!