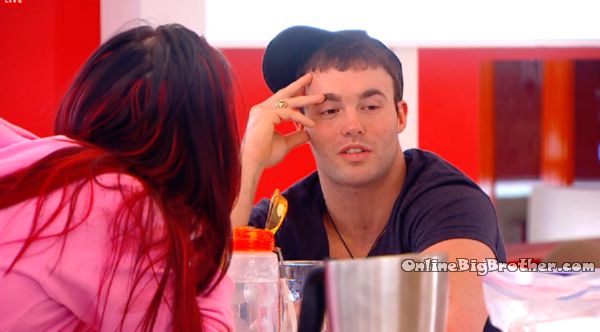 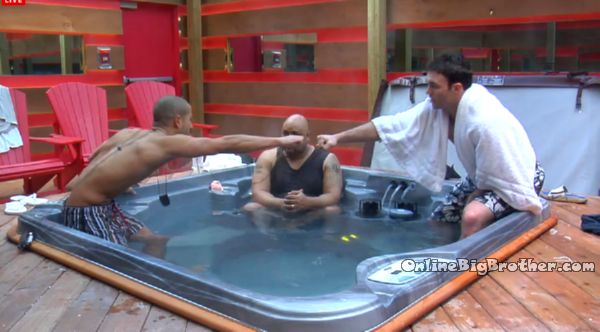 5:28pm Hottub Adel, Paul and Kyle
Kyle says he doesn’t trust Ika. Paul brings up that she gave him her word because he saved her as$. Adel raises his voice “You didn’t save anyone.. dude who did you save” Paul explains that he put Ika up against the one guaranteed to go home.
Adel: “paul you think you’re saving people you’re not saving anybody”
Kyle and Adel tell Paul Ika tells everything to Jon.
Adel tells Paul that nobody cares when he swear on his kids the other players out there are in this game to win the money. Adel says as long as Andrew puts up two girls they are safe.

Adel says the girls cannot stand Andrew.
Adel goes on and on about breaking up the newfy alliance (Kenny/jon)
Adel: “I’m putting up Jon and Kenny 1 billion percent 1 billion percent”
Kyle: “Me to.. me to” (They fist bump)
Kyle: “If I win HOH Jon and Kenny you are going up I’m causing a F*** sh!t show”
Paul: “This sh1ts got real… serioulsy dude”
Adel: “We’re going to run through this F*** game”
Kyle says to Adel “Jon and them know that you’re my floater buddy” 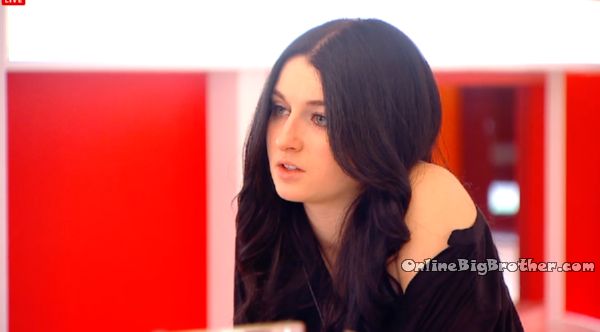 5:44pm Rachelle and Sarrah Sarrah shares how she has difficulty dealing with anxiety. In her regular live she can “Power throw it” but in the house it’s a bit harder. RAchelle says she hasn’t felt herself since entering the house. They are suspicious how Paul, Kyle and Adel were out in the hottub for so long talking.

Sarah doesn’t know 100% if she is safe ans she has no clue who is going up. She claims to have heard PAul and Adel’s name get thrown out there. RAchelle says her name has been mentioned. Sarah hasn’t heard that.

5:56pm Kitchen Arlie, Sarah and Kyle
Kyle says everyone is following Andrew around like lemmings. He thinks everyone has decided who they want to put up it’s pointless for people to keep sucking up to Andrew.
Kyle: “Everyone is either suck!ng d!ck to stay alive or nothing else”
Sarah: “Who is S******g D**k”
Kyle: ‘It’s sarcastic.. everyone is sucking up in the HOH room and not doing activities anymore” 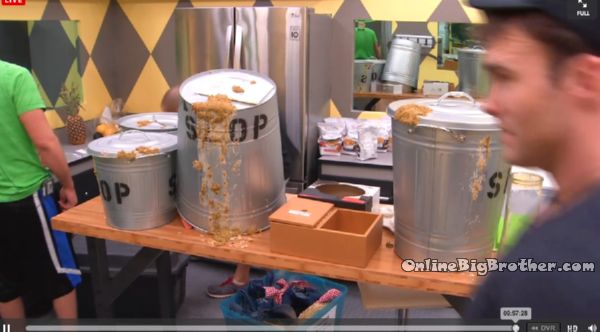 6:08 Kyle, Jon and Arlie storage room
Kyle tell them he’s exhausted, “I can’t even swear I have no energy”

Kyle adds that Racehelle’s boyfriend is a sucker cause she’s in the house chilling with Jon, 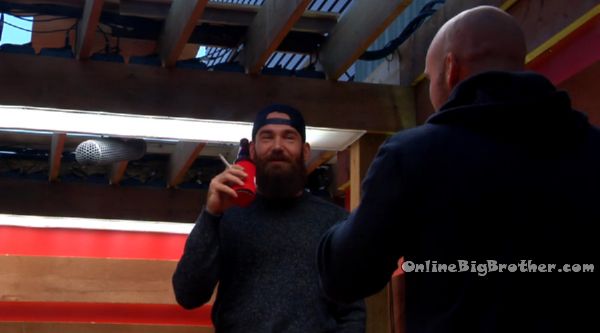 6:12pm Hottub Kenny and Andrew
Kenny is saying he’s worried about Kyle winning HOH if it’s physical but isn’t worried if it’s mental. Andrew says Kyle isn’t a tool but maybe isn’t as much of a mental threat as Arlie.

Kenny :”My goal is jury now”
Andrew: “All we need to do it knock out 4 more”
Kenny isn’t sure they might bring a player back into the game like last year, He’s guessing that Anick might have a chance to come back.
Andrew brings up how he made the right move when forming their group of 5 (Arlie, Kenny, Andrew, ?, ?)

Kenny says he’s worried about Kyle
Andrew: ‘I want Paul gone because he’s annoying the sh!t out of me”
Kenny thinks they should concern themselves with getting out strong players first.
Andrew says if Paul get pulled off the block he’ll put up Kyle and Kyle will go home.
Kenny again presses how Kyle is a big player and paul isn’t. Even though Paul is annoying they can deal with it.

Andrew: “Your point is very valid he (Kyle) posses a much bigger risk than PAul”
Andrew: “I really don’t want f**** Paul in the Jury”
They agree both Kyle and Paul will be bitter Jury members.

Andrew and Kenny both are thinking they are playing the game at a higher level than most the other houseguests. 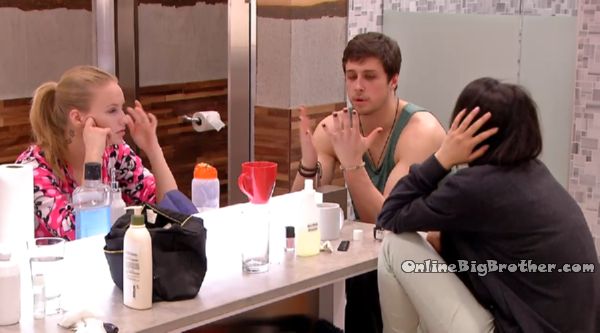 And here’s where the stupidity begins “Durrrrr if I win HOH I’m gunna ______ and put up _____ and _______” Like just shut up! People are putting targets on their backs just to get momentarily interesting conversation.

“Andrew brings up how he made the right move when forming their group of 5 (Arlie, Kenny, Andrew, ?, ?) ”

Not sure, but I think they mean Sarah and Sabrina… That’s what Kenny said when listing “the 5” in their talk next to the hottub.

Is there a first five alliance? Or just me tripping. I think Kenny Andrew Sabrina Arlie and Sara. I am just now catching up and thought I saw something emerging.

Yeah I just rewatched vote everyone did the hand signal 1 then 5 like first five. Except Kenny.