8:42pm Feeds back after an hour of Hush Hush

Kenny’s knee has been hurt.
Sounds like they got a reward and Talla and Gary came to visit them.

Sabrina organizes a Hot Tub PArty. Everyone but SArah makes their way to the hot tub room. After some random chit chat Jon, Arlie and Heather head inside. 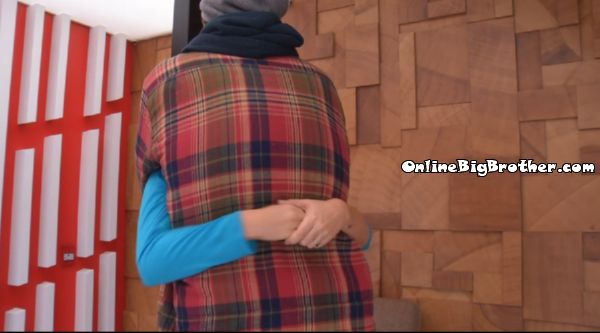 8:59pm Sarah and Jon (There was a DR leak with Arllie)
They high five for their new alliance with Arllie.
Sarah says she’s not with KEnny and Andrew she’s on the outs they don’t tell her sh!t. She asks him who he wants the replacement nominee be, “it’s not going to be on of the big dogs”
Jon doesn’t know.
Jon says that Adel has his mind set on taking out of the the “Guys” with his power. Jon asks her if she’s OK with that. Sarah – ‘As long as everyone is on board with it”

Sarah wonders if it’s possible that some of the players in the house do not have fans. Jon thinks it’s pretty obvious. They both think all the drama in the first couple of weeks around Adel, Kyle and Paul and how Adel stuck with his friends help Adel gain friends. They agree Adel being happy and uplifting helps.

They are wondering why Adel has so many fans. Sabrina thinks production never showed Adel’s nastiness they only showed him as a sweet funny person. They are all being portrayed as the evil people.
Sabrina – I want to take him out just for that
Sarah – “If they showed the things he was saying and doing people wouldn’t feel quite…. Crazy.. “

Ika doesn’t think it’s worth “Checking” Neda, Rachelle or Sabrina because they are just girls.
Ika – “Someone like Sarah i’ll go toe to toe with her.. Let do it b1tch”
Ika thinks that Sabrina is trying to be her, “She’s trying to bump my style so much..” Ika calls Sabrina a “Simple B1tch” because how she is acting around Andrew.
Adel says putting Sabrina up is a waste “She’s weak she won’t win nothing”
IKA says she’ll put up Sabrina and Andrew. 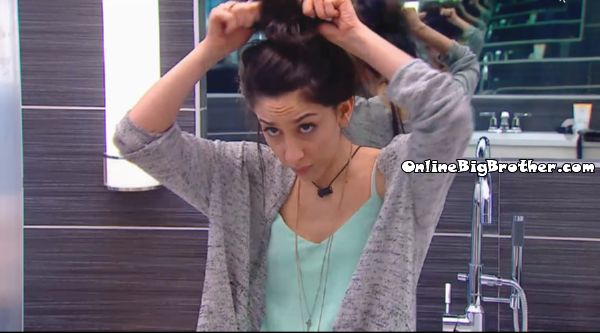 9:24HOH Neda and Sabrina
They chat about Arlie’s moose competitions early today, say some of the things he was saying he really meant.
Sabrian – “For little Arlie to tell her she asks like the devil is inside her”
Sabrian – “What he told me he really felt.. he started crying .. he said Andrew and kenny make him feel they are more superior.. he feels Sabrina is such an emotional person that he’s not sure how she will react.

Sabrina says from day one Adel was talking bad about Talla. She finds it odd that all of sudden he’s being nice to her. Sabrina is pissed that everyone outside the house likes Adel she wants to get him out of the house next week. 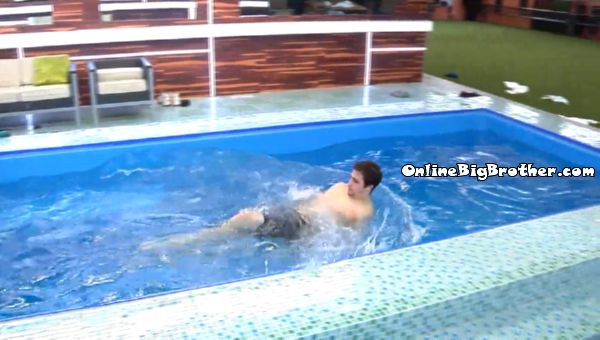 9:45pm Jon jumps in the pool.. Fog Horn punishment is almost over.

Sarah – “I thought you had a b*ner like crazy” 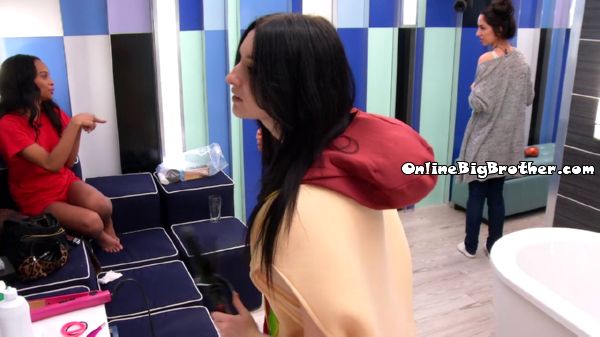 10:05pm HOH Ika, Neda, Sabrina and Rachelle
IKa says Heather came in and asked her if she felt safe. IKA – “I was like umm of course I feel safe my best friend is HOH”
Neda says she’s going to sleep in the main bedroom. Rachelle says “You’re going to sleep with Jon”
Neda says they are sleeping in different beds.
IKA rubs her two fingers together says “Whooooo”
Neda – “what does that mean.. i don’t know what that means”
IKA explains it means love
NEda says people need to stop saying that because it’s getting kinda awkward with him having a girlfriend. .
IKA acts all surprised “Really… OK”
Neda leaves and IKA says they can’t say that outloud anymore.
IKa adds that Jon told her Neda is the closest to his girlfriend’s personality. 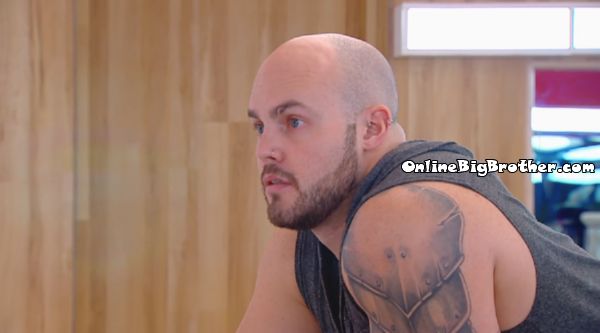 Andrew says his looks will fade but his personality will only get better, He adds he’s got 20 more years looking the best ever. Andrew – “I’m a Spartan warrior”

HE tells her after these next two evictions they will have nothing to worry about. “We’ll have to see who turns on who.. that is the question”
Allison – ‘Don’t you turn on me”
Andrew – “Unless you turn on me first” 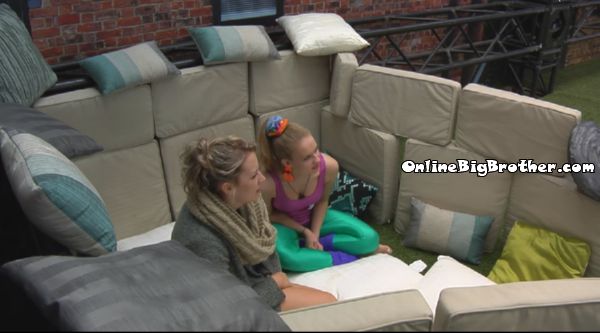 Sabrina is jealous that Arlie is well liked by the fans, so now she wants to nominate him next week. And she can’t understand why her team is being portrayed as the bad guys. She’s such a silly villan.

You mean Adel right? Not Arlie
I want those 5 to break to pieces so bad

I really believe kenny is not gay or maybe he is not sure about it cause can not read these horrible ppl..

She certainly will have a rude awakening once she leaves the house and meet the fans.

Sabrina is delusional. Yeah, we know Adel is not a saint, but he is more likeable than most people in the house. Every time Sabrina says that her alliance are “good people” I get “nerd-herd/the friendship alliance” flashbacks. I can’t stand Sabrina, I really hope she doesn’t win. But then again Maggie won so…..

the new alliance is legit?? i hope so

Wow Sarah … Adel is liked because he is a good person
Peoplw who can’t see their own
Bad sides drive me crazy .Sarah said in her intro she hates
Bullies and bitches … Well Sarah you are what you
Hate lol . I can’t stand that arrogant woman
No wonder she’s on medication .

Omg now Sarah wants to be on team Adel
Fuck that shit .. Stupid bitch stick with your first 5 .
Leave it to a Ativan addict to jump ship lol
What a disgrace

well, i think sarah and arlie realize that with rachelle being close to sabrina, and allison being close to andrew…. their spots are being replaced in the five. arlie and sarah are now #6 and #7

Sarah is just going to do with the boys what Sabrina is doing to the girls. She will gut them to protect the 5.

Making fun of someone’s need for medication is NEVER okay. There’s notthing wrong with getting help when you need it and she sure does not need people turning it into a joke or an insult. That is truly horrible.

some of the stuff shes putting her husband through with kenny is what is really horrible.

If she needs anti-anxiety meds she should never have auditioned for Big Brother, and never have been cast.

Really? I think it really attests to her strength to be able to go on tv show like this and open herself up to potential judgement from all these people. Anxiety is actually extremely common and I don’t see how that should disallow someone from any opportunities.

Anxiety? My ass!! It’s called life – grow up and deal with it.

It’s disgusting how ignorant some of you are about mental illness (anxiety).
You’re the reason there’s such a stigma associated with it & people don’t feel comfortable coming out.

What goes around comes around … Sarah bashed And said horrible things
About Heather , maybe she shouldn’t claim to hate
Bully’s when she herself is one . She thinks she’s
So evolved but in reality she is just a dumb sheep

Please don’t complain about bullying done by Sarah, by bullying her yourself.

Seriously Name? One minute you stand up for people bullying Sara, then you do it yourself? Hmmm…. Hello pot :p

See this is exactly what is wrong with the world
People go around firing off there mouth
Expecting not to get shit on in return . I say fuck
That . Respect is earned not just givin away
We need to stop defending and enabling people to
Continue on being assholes . As far as medication
Give me a break everybody has problems
Maybe if she did some soul searching
She could find the answers within instead of
Medicating herself like all the other sheep .
Medication is designed to not cure , not kill
But keep sick . $$$$

I don’t know how many months of screening or waiting or filling out paperwork goes into being a houseguest, but Sarah is one ungrateful b**ch. Not one day goes by without her saying “I hate this game”. I don’t know if that’s her ‘strategy’ or not but what the heck did she expect? I mean commit or quit. There are so many other people who could have been there in her place. She is mean, prickly, and miserable IMO.

can sabrina be evicted yet

What do you mean by ‘there was a DR leak with Arlie’?

There are live feeds. We are watching Adel. He’s not as nasty as you guys.

Haha I love that “Ratchelle”

Ika needs to stay because I want to see her check all the bitches. FOR REAL. This girl can’t leave. Same with Adel.

I’d love to see Ika’s pimple-ass self go to jail for beating up someone (she’s probably used to the prison environment anyway). She won’t be able to take her weaves with her though. That’s all she has as far as looks go and that is fake anyway.

Marissa87 I couldn’t agree with you more!

I can’t remember if they did a fake eviction last season. But, I hope they warn us in the beginning of the show that it may be a fake eviction and keep Ika in the secret war room.

Heather, Allison, or Rachelle should leave before Ika really leaves.

Well, now what is in recheals mind? Who she is going to nominate? BTW thanks to you Simon for all the updates!!! I’m a great fan of onlinebb.

ika asking explaining herself to dumb, dumb ..was so painful to watch!!!

What does Allison DO exactly??

The way it is