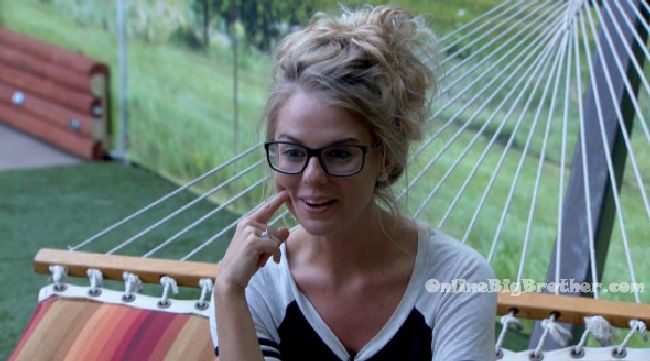 Jozea goes to talk to Bronte. Jozea says I think she (Nicole) was a snake on her season. Bronte says I don’t think she’s a snake, I just think she’s the one holding them together. Jozea says oh yeah, just like me. Bronte says if she wins HOH she would put Nicole & Corey up. We just need to get HOH and Roachcoach (Roadkill) and send all their a$$es home. I do not want them on jury. (Vets) Not a single one of them. Jozea agrees. We can’t have that. Bronte leaves and Paul joins Jozea. Jozea tells him about his conversation with Nicole. Paul says its good you covered all your bases. Jozea says see I did something for you guys .. so later when I need something from you .. you’ll do it. Paul says but that was for you. Jozea says true. I feel really really confident about this elimination. Paul says as you should.
FLASHBACK and watch everything you missed: Live Feed 7 day FREE Trial! 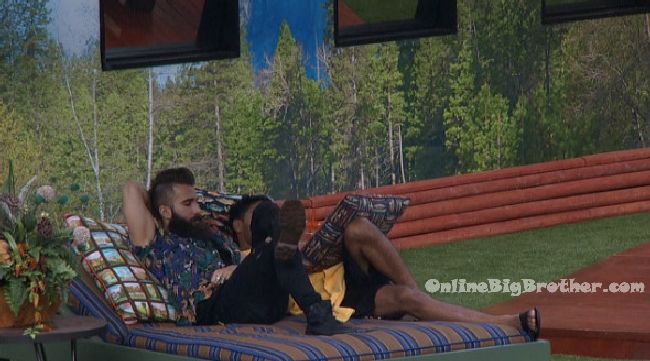 7:30pm – 7:45pm Cam 1-2 Nicole talks to Michelle in the safari room. She tells her about her conversation with Jozea. James joins them and they talk about what the HOH comp might be. James tells Big Brother to give them the wall. (James knows he’s made for the wall comp as he’s won one before.) Paul joins them.


Corey joins them and tells Nicole this reminds me of you.. 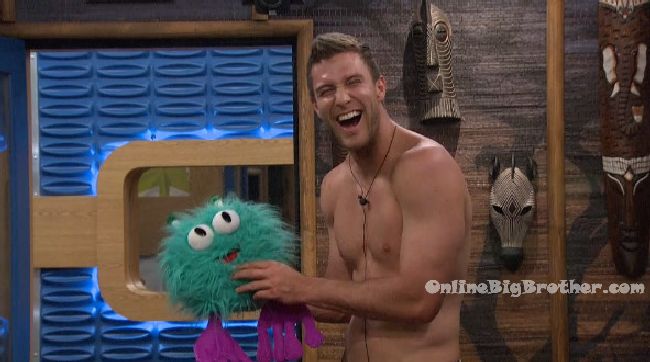 8pm HOH room – Zakiyah, DaVonne and Frank – James says Jozea thinks I’m part of the gang now .. he’s counting me as part of the vote. Frank says I can’t wait for the vote to come out. James says I see him looking at me and wink at him saying I got you. James and Frank laugh. James brings up how Nicole’s heard Bronte’s called her a b***h to other people. Frank says she’s a nice girl .. its one thing to call me a dick ..because I am.

8:15pm – 8:30pm Paulie, Paul, Nicole, Michelle, Bronte, Tiffany and Frank are in the safari room chatting about random things. In the kitchen – James, Corey and Bridgette are frying up some chicken.

HOH room – Tiffany tells Nicole if one of us find alcohol we should just take it up here and hide it. Nicole says yeah or just one bottle.

8:40pm The house guests are eating the fried chicken and coffee cake. Meanwhile Victor and Jozea are working out in the backyard.

8:50pm Tiffany is hiding out in the HOH room watching the spy tv. Meanwhile – James wakes up Nat Nat and tells here there’s biscuits and gravy. She hops right up. “You know how to wake me up!”

I’m tired of seeing these people in their blur costumes. If clothes reflect personality we’ve yet to fully meet these people.

Is this Jozea kid for real? LMAO.

Is it Thursday yet? I am ready for Jozea to go!

All he does is run his mouth in a non beneficial way. #OverHim

Perfect! Joz talks to Nicole to smooth things over, comes back & lies about her, then calls it a favor for the team?! Paul is like… errr… you’re just covering yourself. He can’t take any constructive input from his team, doomed from start to finish, they can’t save him from himself. Why in the world is Bronte drinking that kool-aid?? Frank said he thinks even Bronte’s voice is an act, & she needs to go next.

Paulie calming Tiff down while she says getting “passionate” runs in her family… if that’s what you call it. How many handlers does she need, lol. Paul needs to handle Vic, Bronte, Nat & Bridge who are super immature & unaware of how to play the game… they’ll implode when joz is evicted. Why didn’t they watch bb in sequester? Too busy Instagramming selfies?

Jozea has to be the least self aware contestant ever lol. I just can’t believe he doesn’t have even an inkling that he’s going.

If he keeps this stupidity up, he’ll make Frankie look downright cerebral.

my body is ready for Joz to gtfo

First year having the feeds. I have never truly understood the torture of costume punishments until now. I cannot imagine only being in my underwear for a week and nothing else. I think I’d lose it

I agree.. and to make it worse BB wasn’t giving them underwear to change into each day like they said they would.

I dunno, I’ve only put on pants like 3 times in the last 2 weeks to run an errand and it’s quite nice. Granted, I don’t have cardboard strapped to my underwear. And I do change them. So I guess it’s not the same. Never mind.

April in Paris
Reply to  Dawg

I’d like to see Allison Grodner wear
the pixels for a week oh wait no I wouldn’t and that’s why they never have fat girls. But big ole boys are ok what double standards. No I’m not fat just big butt… Like the song

Archangel
Reply to  April in Paris

Allison Grodner in a pixel bikini?? Not enough eye bleach in the world to erase that visual…

Jozea is beyond repair ” I did something for you guys .. so later when I need something from you … you’ll do it. wtf can’t Thursday come any faster

I am going to be sad when Jozea goes this week. He is just so stupid and full of himself that its entertaining to hear what is next from his mouth.

Jozea – ” I did something for you guys, so later when I need something from you – you’ll do it. ” – Exactly Jozea – They will all hug you on the way out the door !!! Bronte is going to blow a gasket on Thursday you just know it. I have a feeling she has a bad temper to and we just haven’t seen it yet.

Bronte told Paul she thinks Michelle is a man… she’s not as nice as her baby voice, giggles & headbands would have you think.

Jozea is probably the dumbest HG in the history of BB.

I don’t know Danielle from season 14. On Frank’s first season was pretty stupid. So was Ashley

I don’t understand how jozea and paul are so confident about this vote when they know tiffany and Michele are with the vets. Why on earth would jaes vote for jozea to stay just because the other 3 on his team are lol and even if he did they still wouldn’t have the votes how do they not see this.

I really don’t under stand the hate for Victor. He’s lost in the game, but he’s a nice guy. Also, why is Frank being such a jerk this time around. I loved him the first time, but now, he’s way too cocky.

Do Not Bend
Reply to  Anonymous

I think Frank has always been kind of a dick, taking shots at people and then laughing it off with a backslap and a grin. I mean, he’s mostly a good dude, but he’s also kind of a dick.

Frank was a worse Jerk, on his first season; Much of that came from Boogie! ( Anything too appease his idol, Boogie. )

I think Josea has a lot of insecurities, so he overcompensates.

I disagree, I have never seen someone so full of themselves.

I’m for the vilified.

I am curuious why the people in charge would prefer to keep in a player like bridgette who has a much better chance to win than Jozea. Jozea is so dumb, so delusional, cannot organize a deck of cards , that it almost would be better just to keep him for another week. He is so blatant and stupid that he almost is good for the vets game. Bridgette on the other hand is a little more clever and smart enough to keep her mouth shut and is a little bit sneaky, should fly under the radar, build alliances and win 2nd place because being perceived as weak might make her an advantage.

Haven’t you heard? Joz is “the glue that holds the newbies together”? Lmao

Frank is more tolerable this time around; doesn’t have Boogie… constantly in his ear!