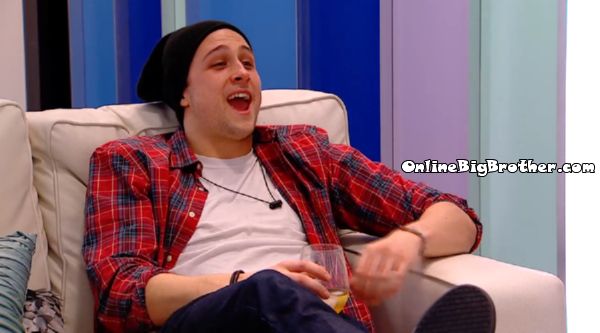 11:12pm HOH Sl**py seconds + the gremlins
Everyone happy or at least acting happy. The girls say Jon’s girlfriend Janel le is hot. Sabrina and Rachelle tell them they are heading to the pee hot tub Allison says she might join them later. Sabrina says it’s amazing how the power shifts every week. Jon says he’s sipping rye all night and getting messed up.
The gremlins leave..
The sloppies start talking about how they just steamrolled the other side into the dirt. Jon – “It was like BOOM ceya BOOM ceya BOOM ceya”. They congratulate themselves for getting out 3 strong players, Andrew, Sarah and Kenny. Adel is warning them about the gremlins says that they will be the ones voting for someone to win the in the end. 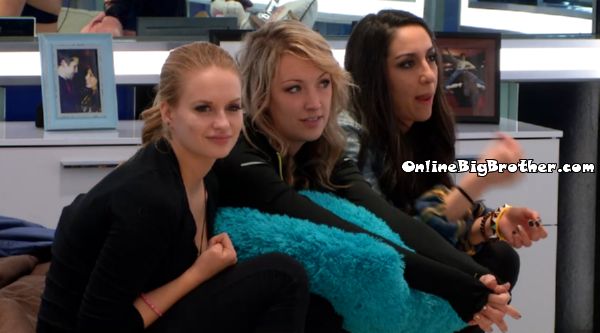 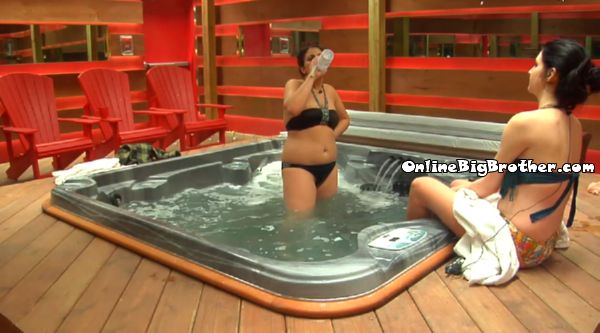 11:16pm Gremlins in the hot tub
Talking about being f*** in the game but trying to be optimistic

Jon comes by and tells them they are welcome anytime in the HOH. They thank him and Jon leaves.
Sabrina tells her that “They” (Kenny and Sarah) lied and screwed themselves in the game.

Sabrina tells Rachelle they otherside will be taking her out first. Sabrina adds that Heather said it’s Heather, Arlie, Neda and Jon final 4, “They had it since week 3”

Sabrina says going home is a bigger deal for her because she loved this show since she was 9 years old.

Sabrina points out how Jon is not going to win with Allison and Arlie in the game they have to help him realize that.
Rachelle says Kenny would randomly tell her she is so hot, “What the f***”
Sabrina says that was very mean of Kenny.
Rachelle agrees.
Sabrina – “he obviously will do anything”
Rachelle – “Can he still get a b*ner with a girl that’s like so weird”
Rachelle says she had no idea Kenny was gay.
Rachelle says going to LA with Sabrina is going to be way better than Big Brother. 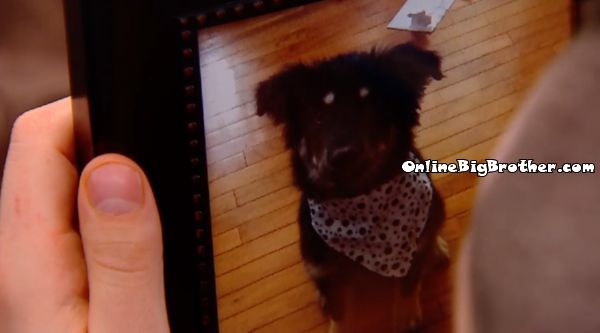 Question: is Kenny in jury?

So that means Canada is a jury member ?

I would think yes, unless Canada has a jury vote like some people have suggested

^ I say this because you can’t have an even number of jury members, incase there’s a tie. Usually there are at least 7 jury members, which would either make Kenny or Canada a jury member.

Kenny won’t be in the jury because he was told about Allison at the aftershow. Maybe another player is coming back to play…

Is anyone talking about Allison telling Kenny that production has a way of keeping him from playing in POV so he better win?

I would love to see Arlie ,Heather and Adel
Stick together .

I can’t watch the live feeds right now. Any mention on it coming out that Rachelle voted out Sabrina yet?

How did my question get 2 thumbs down??? Are questions not allowed???

I think people often thumbs down as a way of saying “No”.

@Ann, it’s the internet. All kinds of strange species here.

Wait, I thought Neda was HOH or did they just have another one after the instant?

How is kenny a have not when he was evicted?

He was a have not, then got evicted. He’s not a have not now.

Didn’t Sabrina question the vote to evict her?

Does anyone know why Adel had A and C on his face?

For his girlfriend… Abby Chebli

For his girlfriend I think

I Know I'm Not The Only One

Sloppy seconds: Don’t thank yourselves, Thank Canada without them the would be no sloppy seconds alliance 1st 5 would of steamrolled = snooze fest

On a second note: Grems vs Sloppy seconds steamroller = another snooze fest

Either scenario would been a lost for Canada. IMO No Villain

Max
Reply to  I Know I'm Not The Only One

I have a feeling it won’t be smooth sailing though. BB may have something up their sleeve.

Maybe a Marsha’s Mystery Box on the TV Screens in the HOH room?

Marsha needs to make an appearance!

AS much fun as the sloppies are only one person can win sooner or later shots will be fired.

Sooner than later I bet. It’s gonna be more entertaining than people think.

Simon + Dawg were 100% dedicated & amazingly accurate
when chronicling for us all the insipid & not so inconsequential
game!play in BB*u$a*15 and i’d like to thank them both again
for it. we know Heather just showed a resolve equal to Helen’s
and still has one big target on her, but she did what IKA failed
to do. We know this is the lull before the storm, its a honeymoon
interlude, they all do not get prize money, instead most likely
they will pick up a well earned check for being the jury. they will
be living with Kenny real soon now, most likely. I’m assuming
that Sabrina goes next, but if Allison playz thru her Red-Veto this
has Rachelle in a desperate bind. I don’t expect a real powerplay
until May day but I might be totally wrong. I am rooting for Heather…

Mel
Reply to  I Know I'm Not The Only One

Arlie does. I guarantee he is planning to take Jon out next week.

I think Arlie’s more likely to try to take out Neda than Jon (and rightly so, since Neda doesn’t trust him at all, especially since in the first HOH tonight he asked her if she wanted it and then threw it even after she said no). IMO Arlie’s dream F4 would be himself, Jon, Heather and Allison.

It would be a good move to take Arlie out now – while he can depend on votes from Sab and Rachelle. I’m sure Arlie’s gunning for him.

Everyone in the house is in shock…even the HOH group (since they actually got 3/first 5 out).

So since Allison still has her Scarlet POV, that means she probably won’t have to use it on herself this week.

I feel like PROD is going to persuade her to use it, since it was such a big deal to find it and expires after this week. Who knows? She may use it on Sabrina or Rachelle if she decides to break away and create another alliance. She may feel like shes on the bottom of the Sloppy Seconds and want to make sure she is safe next week.

Arlie may flip (again if he argues with Jon) and join Allison, + 1 gremlin, and 2 other people.

Funny to see Sabrina and Rachelle talking trash about Kenny now that he is gone. These two have no shame, they can’t even say nice things about someone who was on their side to the end.

i really think neda likes jon a little more than a big brother… i believe it in my heart that she wishes jon was single.. must be breaking her heart the way jon talks about janelle ,just look at how sad she is while chatting with them in hoh room…. fake laughing at them…

Although 1/5 seemed to be full of ‘big players’ it was doomed from the start. Sabrina came up with the idea (1st debit). Too many egotistical personalities (Kenny and Andrew and Sabrina). Just as fast as Sabrina seemed to escalate as a great social player to some, she crashed and burned just as fast. With her on your team; nothing but loss. Her tactics were shall we say, less than desirable, as was her personality and constant need to be told she’s great.

Pardy in the house right now! Jon drunk dancing wearing underwear on his head. So funny.

Nothing to do with the above, but does Slobrina know that Rachelle voted to get her out over Kenny? I didn’t see that coming but it made me laugh. Also, I hope they at least give Neda her letter.

I hate this show and won’t watch it after this Arlie is a complete trader and asshole!

If the Gremlins had any sense at all they would split apart NOW and start trying to create bonds with the other houseguests. One of them IS going home and the other needs friends for a chance to survive once the Sloppy Seconds have to nominate one of their own. They’ve already lost in their minds, just like they’re lost in real life.

Poor Rho-Rho. Slobrina got her hooks in and she’s just going to drag Rho down with her because she’s so emotionally needy.

I’m so tired of hearing Sabrina’s voice. Her voice is loud and unpleasant like Chalk on a Black Board. The sobbing whiny voice, with out tears, so phony.
Please do yourselves a Favor and get of Sabrina ASAP.She is a Major Liar!!!!!!

Ya and Heathers voice is so much better….don’t worry production is fixing it just like last year so the majority can get who they want to win . This year they won’t let a Topaz type screw up happen. Won’t be surprised if Gary gets voted in or has the final Jury vote. Why is Peter on the side show? I hope Evil Dick beats the shit out of him man he is so annoying. He makes the side show unwatchable

It blows my freakin’ mind that Sabrina is totally making it all about her getting fucked over! Your alliance is not even playing the game anymore and you are still talking shit about them and spreading lies about them. Who cares!!! They are gone and you are still in the game. You have no idea what its like to get fucked over till your walking out the door. I hope they have a straight jacket (and a muzzle)waiting other side when its her turn to leave beacause it is sure to be a shit show. So sick of her endless pity party

Did she cry a lot or are her fake tears now all gone?