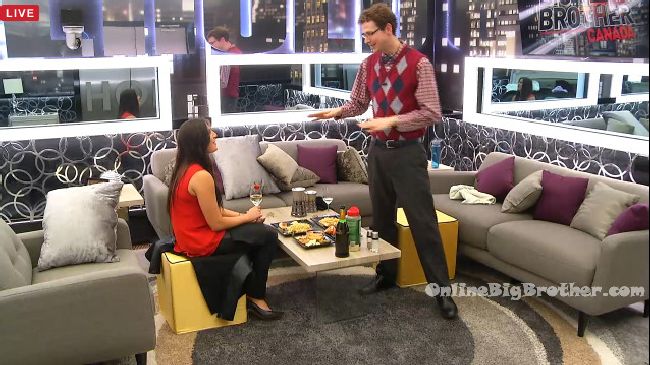 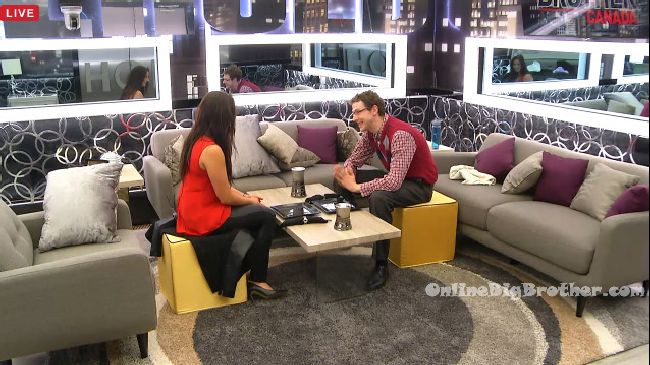 Joel gets really quiet and Cassandra asks him what’s wrong. You’re getting really quiet. Joel gets up and says that he’s going to go. It’s just not vibing for him. It’s not you its me. Joel leaves.
Joel sits on the couches outside the HOH room. Others ask him what’s wrong. Joel says that everyone was upset at him that he asked Cassandra. Maddy tells him its not crazy. He says its just a lot to take in. Lovetia tells him I’m not upset at you. No ones upset at all. Joel says he wants to just sit and chill by himself for a while. Nick asks Joel if he wants to talk in the bathroom. Joel says that the whole dating thing is just new for him. Nick tells Joel that if its not right, its not right. You’ll find the right girl some day. Joel asks how do you guys do this on a regular basis!? Nick pulls Joel in to comfort him. Joel says things just didn’t feel right with Cassandra. 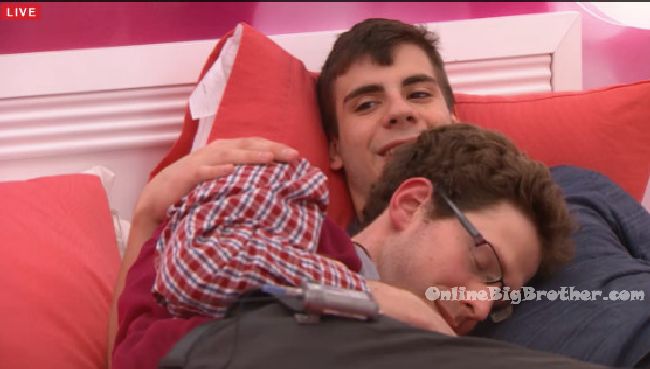 5:10pm Storage room – Tim tells Raul that he told Loveita she should consider a backdoor plan to get rid of Dallas because if you don’t get rid of him now he’s going to get dangerous. But she didn’t want to do that. I don’t think she’s going to put you up. 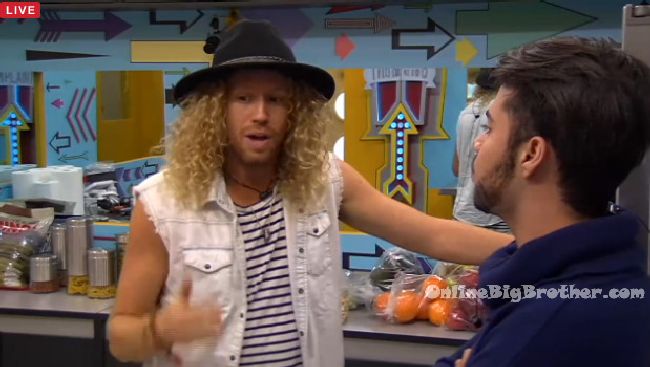 5:15pm HOH room – Cassandra sits in the HOH room alone to eat the dinner. She asks am I getting punked again!? First time for everything (Being left on a date). Big Brother then calls Cassandra to the diary room. 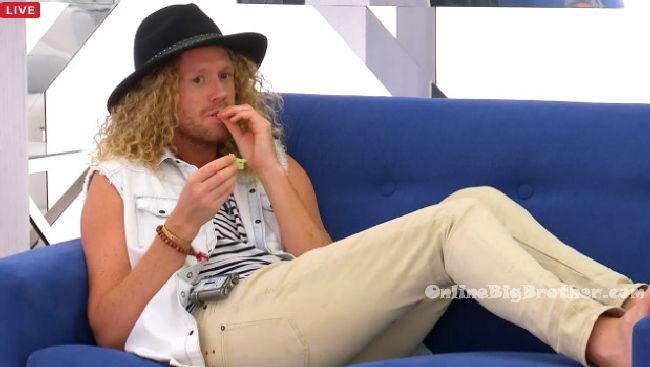 In the living room – Tim is upset that he made the meal and didn’t even get a thank you. Dallas says not all Canadians are like that. Cassandra joins them. She says she doesn’t know what happened and says that she was talking about different ways he could meet other girls. They tell her she should have changed the conversation. He was on a date with you. Dallas tells Cassandra to go show him your boobs.

5:25pm – 5:30pm Joel heads back to the HOH room to be alone. He starts eating the meal and finishes off his champagne. He then sits back on the couch. Nick comes in and Joel tells him he just wants to be alone. They hug and Nick leaves. When Nick leaves Joel laughs and says sucker! Cassandra joins him again in the HOH room and Joel says he just wants to be alone. Big Brother calls Joel to the diary room and then blocks the feeds again.

JOEL during his mission to punk Cassandra @bigbspoilers #bbcan4 pic.twitter.com/14UYJBpf8p

6pm Storage room – Tim says even if you go against them, there are only three of them. Nikki asks have you had second thoughts about me being up. Loveita says no, you guys are nice people. I like you guys.

In the bedroom – Joel tells the house guests “Thanks for playing along guys!” Dallas says no problem. Thanks for the booze! Joel heads to the kitchen to finish eating his dinner. He says it feels okay now that everyone knows I was joking.

In the bathroom – Dallas says so we’re going to get sauced up and then do nominations?

6:15pm – 7:30pm Big Brother blocks the feeds again… When the feeds return – The house guests got food and booze. They’re all doing toasts every time a bell rings. Ramsey says cheers to the two house guests who had to leave. Tim says they didn’t have to leave, you guys voted them out. 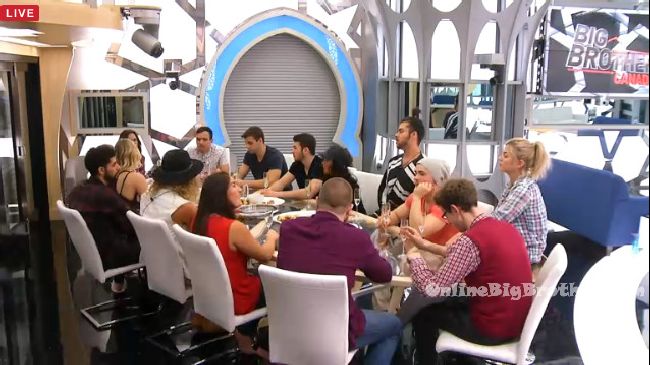 7:50pm The live feeds return again to the house guests lazing around. Loveita says that she isn’t sure what her noms should be. Joel tells Loveita that Cassandra is a waste of a nomination. Nikki says but she’s sneaky. Big Brother blocks the feeds again.

This task and Joel’s revelation about his tourettes syndrome on the last episode makes me like him more. He’s not nearly as creepy as Steve and his mommy conversations were lol.

And let’s not remember him crying with his teddy bear, good lord… but at the same time that could lead him to winning the game i guess right? haha

are jared and dallas saying joels gay now? couldnt understand more than half of dallas whispering to cassandra

is there a twitter account @loveitashat yet?
It’s going to annoy me all season. stupid hats.
#issues.

Did they ever have noms after having been drinking alcohol the same day in earlier BB seasons?
This whole date task was kinda cute at first, but a weird timing, to do it today amidst all this pre-nom tension… hmm…

loveitas holier than thou attitude

lets all hold hands and sing and smile and give each other compliments, im the only one with morals

Hey lets bring in an inanimate object, say like a Complaints Department mirror, that will spice it up a bit!

Probably got sick of the entitled ones lining up every day to make requests.
They already seem to have a couple human mattress covers that do nothing but lie in bed and complain as it is.

Joel is a nice guy but he is just trying too hard to be entertaining, he just does not have it naturally so he needs to just be himself. Christine, I was happy to see someone above 40 in that House but she is so caddy, childish she is just as bad ad Kelsey or Maddy but double their age. It was so pathetic to see her talking to Love this afternoon saying how she does not play it personal…yah right you spent the whole week trashing Love and Sharry.

Tim saying “the eggs are so white, what do they do lay them in the snow or something?” & Nikki saying ” they must be snow eggs” is the cutest thing in that video (Tim Nikki Loveita storage room ) LOL

I could be wrong, but didn’t L / S try to make deals last week pre-nomination with Jared, while simultaneously trying to soothe Kelsey (poorly but at least attempted)?
What makes the deals any more attractive now that the shoe is on the other foot?
I don’t know if it’s the best game move Loveita could make. I know it isn’t the only game move she could make. But it strikes me that Raul and Kelsey seem to forget, while their alliance was in power before noms last week, the whole idea of letting bygones be bygones was never even a consideration. What makes the idea better now beyond their own self interest? And did that matter to them at all seven days ago?
I don’t know what Loveita will do. But I tilt my head to the side and squint a little when Kelsey and Raul react to being questioned on a deal they’ve got no intention of honoring when they are being questioned for its’ honesty.

I hate watching Phil yell at Nick, Phil thinks he’s running the game when everyone has already said they like nick more because he’s more relaxed. Phill a fucking asshole and it’s hard to watch. If friggin Cassandra hadn’t made the comment after love it’s win HOH there would be no confusion for loveita right now. Like I get she’s in a tough spot because everyone expects her to go after the 3 but they want that because they know they’ll stay safe but if she doesn’t go after them they will obviously go after her she is in a lose lose. From watching the feeds Tim is on team wannabe now and wants Dallas out too? I wish someone other then loveita had won HOH she is reminding me of Vanessa 2.0 green beanie included

Loveita is probably going to end up nominated Christine/Cassandra.
I’ll be shocked if she puts up Kelsey/Raul she seems too scared.

another wasted HOH opportunity is around the corner. why didn’t she just throw HOH if she didn’t have a clear plan going into it.

she wasnt trying to win it.

I totally understand why Phil is mad at Nick. Phil is playing a way better game. That would be so unfortunate if Nick ruined it for him, and especially because of someone like Maddy, who is far below average in every way and even that is an understatement. I actually really like Phil, I hope he doesn’t get screwed over.

I partially agree. Phil is playing a more manipulative game.
I would agree about Phil’s anger in regard to Nick and Maddy if he hadn’t spent so long last night getting advice on how to woo Nikki. Sure, it’s all fake, he’s just using her to look like he’s less game and more play, while also getting more guarenteed time on screen, but the difference is negligible when you consider how the house seems to feel about Nikki. In that way he’s a complete hypocrite.