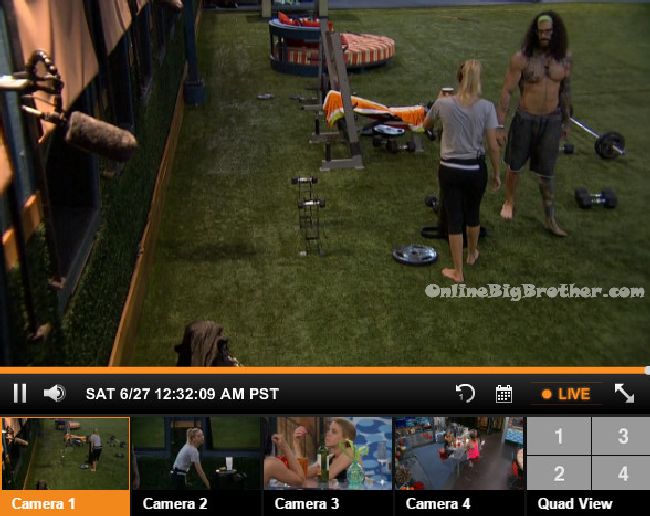 12:30am In the backyard – Austin and Liz are working out. Austin says that room sucks. Liz says I’m not going to let her intimidate me. Austin says she’s done! Austin asks did you ever think you would be rocking out all summer with a dentist? Liz says in a motha-f**king dentist room! Liz asks how should I talk to her? Should I talk to her tomorrow? Austin says wait for her to come to you. I told her to come talk to you. The cams switch to the hot tub. Clay climbs up on top of Jeff’s shoulders. Jeff asks where’s Becky …she said she only dates 7 foot tall guys. 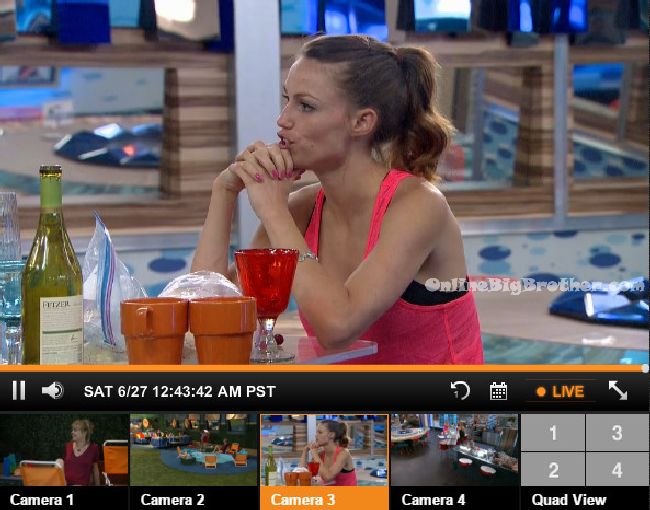 12:40am In the kitchen – Jackie, Shelli and Becky are drinking and chatting. Becky says look at Jackie’s butt. (She has a watermark on her butt) Jackie looks at her butt and says its my butterfly. Becky says I wish there were more super hot guys. Like there are lots of hot girls. I just wish there were more dreamboats ..like 3 or 4 of them. Jackie says at first I thought that but then I was like maybe its better this way. Steve says I’m surprised there hasn’t been any mac’n yet! Becky says I think we’re going to be the most boring ..showmancewise. 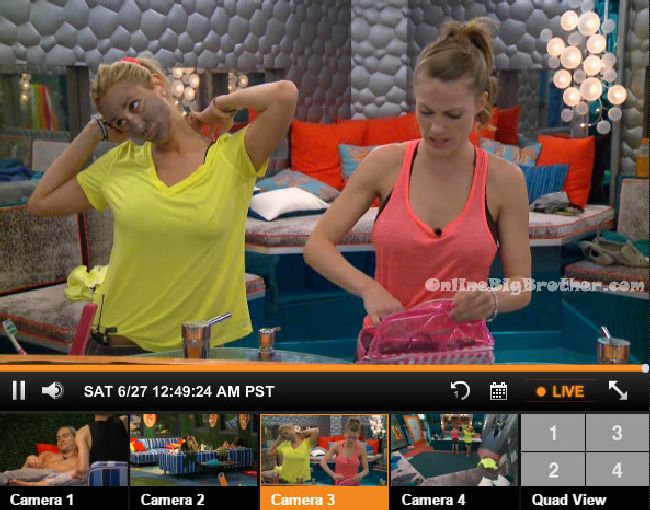 12:50am Out in the backyard – James asks how many beer did they give us? Jason says 6. James asks thats it?! Audrey comments that its so noticeable when people are talking game and they stop talking when you walk in the room. James asks who was talking game? He tries to guess but doesn’t guess right. (It was Vanessa and Becky.) Audrey then heads to the bedroom and talks to Shelli about how she walked in on Becky and Vanessa talking game. All I heard was because of today… Shelli tells Audrey that she feels out of he loop and when she walks into conversations she doesn’t know what to do. Da joins them pulls Audrey aside to tell her not to be the one to bring it to attention. (Talking about telling others that Vanessa and Becky were talking game) 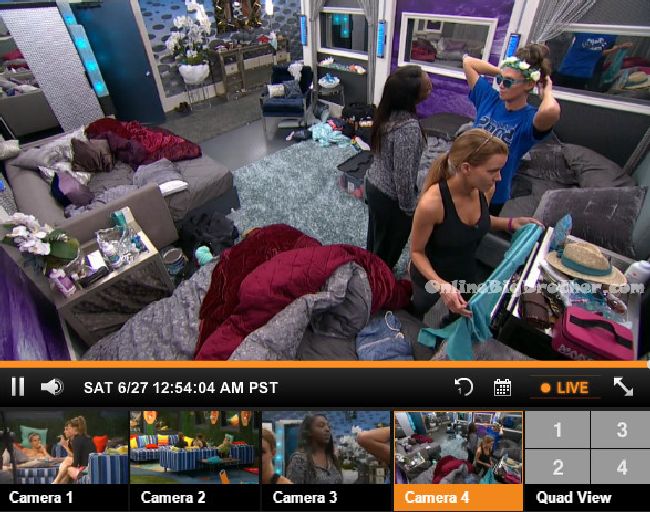 Audrey heads into the havenot room with Vanessa. They talk about how they haven’t talked much. Vanessa says that she told Clay you’re someone I can trust. I trust you. We are very similar type of people. One thing about me is that I’m like a vault if you tell me something and not to tell anyone I won’t. Integrity is the most important thing to me. I think you’re playing a great game and I meant it when I said I really do want you to do well. Audrey asks I’m curious about how much you know what is going on? Vanessa says I heard a certain person was being targeted and that person changed dynamic and may have caused some drama. Audrey asks is that person Jace or me? Vanessa says I will say its not you. Audrey says as far as I know .. the target has totally flipped. Vanessa tells Audrey she would love to work with her because she feels like Audrey will go far in the game. Audrey says that the only things people have said about her is that they don’t know where she stands. 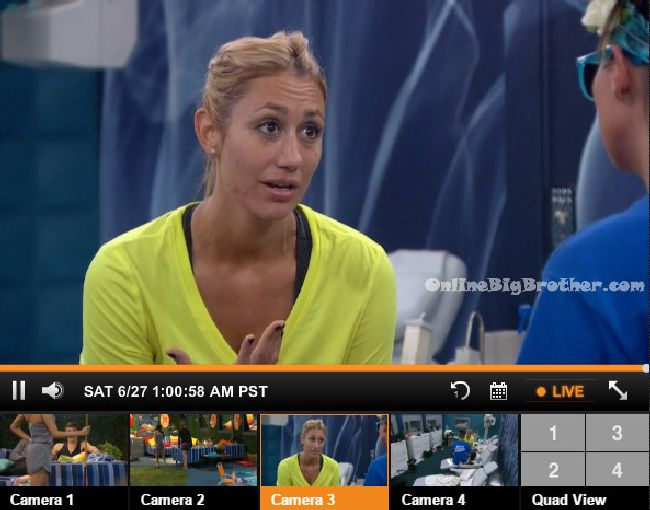 1:20am – 1:30am In the hammock – Jeff and Meg are talking. Jeff asks why did she (Liz) choose to align with 2 idiots (Jace & Austin). Jeff says Shelli is so hot! Meg says she’s so self-conscious though. Jeff says yeah she is hot as f**K! Jeff says its for his best interest. If they were gunning after him.. Meg says I would fight for him. Jeff says we can always meet up with him later. Meg says but I want to plant the seed now! Jeff says I want to play a clean game. As clean as possible, I don’t want to make mistakes. Jeff says I want us 4 to make it all the way. I think we would crush it. We would dominate. Jeff says I feel blessed that James has given me some trust. I don’t want what happened to Clay .. like one day just kick you to the curb. Meg talks about how Jace talks down to her. Jeff leaves. Jason joins Meg. 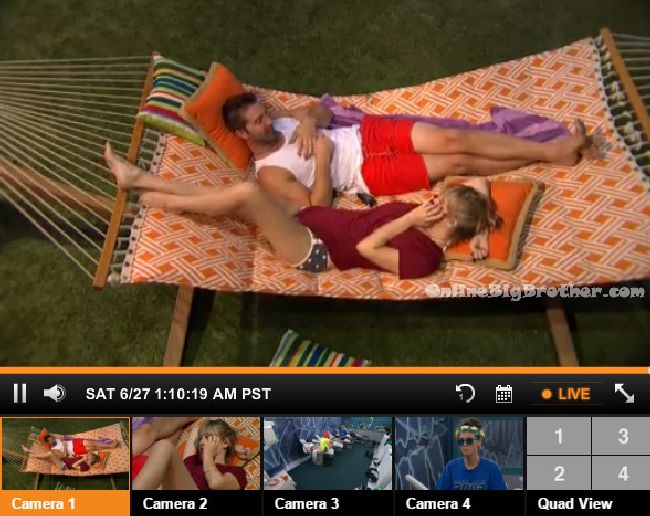 1:35am – 1:50am Jackie and Audrey are playing pool. Audrey brings up how she told the group Vanessa and Becky were talking game and then you ran inside to get her. Jackie asks me? Audrey says maybe its just someone else being paranoid. If you think she’s someone we can trust they I won’t say her name. Jackie says I think its too early to tell. I don’t know. They head inside to the cabana room to continue talking. Audrey says I think I just need to keep my mouth shut in general. Audrey says I told Jeff next week there’s going to be a new twist and we’ll have to adapt our strategy. I feel good about everybody. Audrey says that it doesn’t seem like James has second guessed his decision to get rid of Jace. Jackie says I just want next week to start. Audrey says I have just been too publicly social. Jackie says I just want to watch people self destruct.

1:55am In the bathroom – Vanessa talks to DaVonne about how she thinks being here is good so she can learn how to deal with things without a support system.

2am – 2:40am Meanwhile – Clay and Shelli continue to workout in the backyard. Shelli says I totally trust Audrey. Clay says I do too. Either she is totally playing us or she trustworthy. Shelli says Becky is a great girl and I would totally hangout with her outside the house. Clay notices Audrey and Jeff by the pool table and ask if they should go talk to them. Shelli says yeah. Clay comments on how Jason said his pee pee was getting hard while watching me workout. Clay tells Audrey so we have lots to talk about. Audrey says after Jace goes she is going to detach after what happened today. Clay says I don’t trust Jace. I wouldn’t tell him anything if I was you. Shelli says all I know is Clay came up to me and told me that Jace and Austin were going around saying you were the mole. Audrey asks if for some reason James puts me up would you and clay would keep me. Shelli says of course we would. Audrey says hopefully I make it through this week and then let those that tried to drown me .. drown themselves. Shelli asks is Jason still thinking he should have put us up. Audrey says no he doesn’t think you were coming after him. Shelli says I didn’t trust Da since day 1… I don’t trust her but why did she stick with you and turn on me? Audrey says I think its an insecurity thing with her. She needs to be constantly validated.

Shelli said she didn’t trust Da since day 1. Wow, It’s so …. predictable. Most alliances since day 1 don’t last longer than 2 weeks. Nut I hope she just talks like that before Clay, cause I luv this 3 girls alliance

I want to like Iggy(Vanessa) but I swear she seems like she is barely relevant in this game.

Hopefully Audrey can dial it down. She has talked so much game that you can tell that she is thinking game when she is not talking

Really don’t understand the hate towards Day…. I hope she stays a lot longer. As always awesome job Simon and dawg , when will we be playing the drinking game from BB15 Helen’s you know to bb16 Frankie joins the conversation lol

Dawg
Reply to  Jay A

LOL man I would be tanked with all the conversation crashing.

Is Jace still the target?

Do you think Audrey got her nose up too many asses in the house. She is stirring up too much shit and too soon.

Why is Jeff always talking about the girls? Literally almost every update of him is the same. He’s mad Liz went to Jace/Austin, Becky would never date a guy like him, and Shelli is madly in like with Clay.

Audrey knows she needs to dial it down, but after watching this week unfold I can’t help but think she’s going to be involved in a lot of the drama this summer.