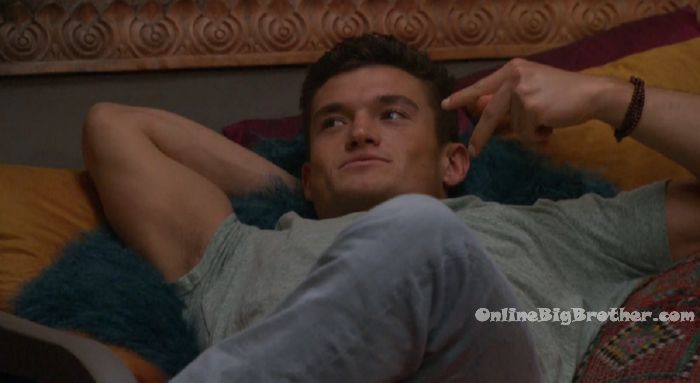 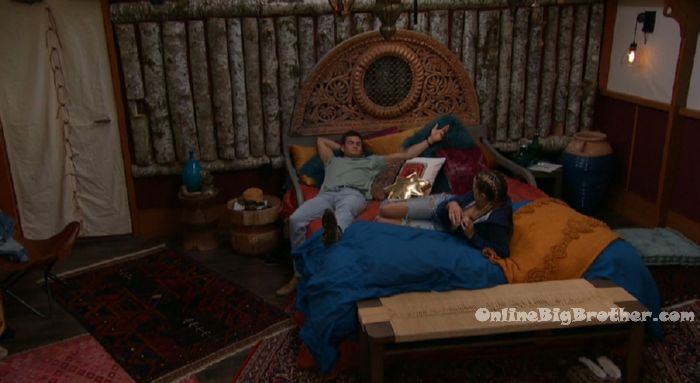 8pm HOH room. Christie and Jackson. Christie – But its good, its still good for us right now. Jackson – its a deflection. Christie – right. Jackson – he’s a big deflection. Christie – 100! Jackson – people are so worried about him being annoying that they’re not cognizant of people forming bonds, people that are winning competitions. Christie – basically us. Grateful! Jackson – Bella and Nick are getting close. Christie – but that’s fine. Jackson – which is fine. Let them. But no one is noticing because they’re so concentrated on the Kemi’s and the Ovi’s because they’re just grinding our gears. I almost want to keep Ovi .. well we have to keep him until week 3 because we have to get Jess out week two. Jackson – Sam scares me. Christie – especially after today. I don’t know how he caught an onion. Jackson – Sam has this look in his eye that frightens me. Christie – he’s dangerous. Christie – do you think he is going to use the veto? He told me he will. Jackson – I think that he will because if he doesn’t and he doesn’t win HOH next week .. he knows that there are 8 – 10 people that are head hunting him. Christie – I know. He told me I’ll use it, I don’t care .. its not like Kemi’s going to jury. I said I don’t care who you use it on.. no matter who goes up they go. Kat isn’t going anywhere.

Jackson – Obviously I slipped up. Christie – when? Jackson – a few nights ago. Christie – why, what did you say? Jackson – no, with Kat. Christie – oh, yeah but it doesn’t matter. Jackson – it happened. Christie – it happened, who cares. Oh is that why she was freaking out and was so nervous but wouldn’t say it? Wouldn’t say that something straight up happened. I wouldn’t say that I heard. Jackson – don’t say any words because we haven’t kissed, we haven’t hugged, we haven’t anything. Christie – its none of my business. Jackson – no, so its not going to make air (the episode). Christie – I know you guys aren’t in a showmance so you don’t have to go around worrying about anything. Its irrelevant. Jackson – but now she has that seed in her head. Christie fist bumps Jackson. Jackson – how many people can say they did it in the big brother house? Christie – right we were trying to mathematically figure out how many contestants there have been … and now how many… its a really small number. Jackson – right, exactly .. so that’s why I was like why not?! Send it! SEND IT!! So obviously I am staying close with Kat because one I never want a girl to feel used or that I’m taking advantage of her. Christie – she has such a good heart. Jackson – she has a heart of gold. I had this friend that we would sleep together like 40, 50, 60 times but she’s my best friend. There was never a relationship there. We were just really good friends. She’s the type of girl that if we all went to Vegas and I got with other girls there she would be all for it and supportive. Its a close friendship but in no shape or form would it ever be something that.. I could never be with Kat. Christie – I get it. Is she your type. Jackson – not really. I don’t want you and Jack to get a target on your back either. Christie – Oh we’re not. Do people think we do? Jackson – no, you’re just closer in public. Christie – we have a connection. Jackson – you do have a connection and its beautiful. Its been a long HOH. Jackson – Sis is my type. Those eyes .. if you look at any of my ex’s. Christie – they why don’t you talk to her. Jackson – because I don’t want to step on Jack’s toes.

Jackson – No one in this house is dumb. Even Cliff, everything he does is calculated to a T. The dude is smart. His social game .. he is pulling on the heartstrings. He has made more people cry than f**king Elvis. We’ve got me, you, Jack, Holly, Tommy, Sis… 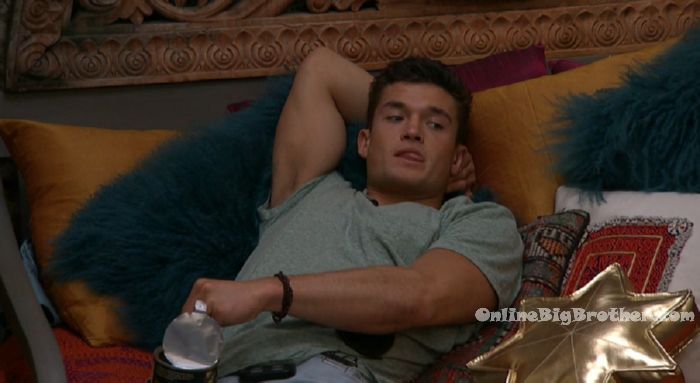 8:30pm Bedroom. Jackson and Kat. Kat is crying. Jackson – let it out. That’s why I’m here. Kat – no, I don’t want to be crying and there’s a camera in my face. Jackson – its real, raw emotions .. let it out. Kat – I really miss my friends back home. Jackson – I know. Just let it out. Kat – I’m sorry. Jackson – don’t apologize. If there’s one person you can confide in ..its me. You feel like you’re alone and you’re not. I told you I would come back. If I tell you something, I do it. And I’m back. Don’t push me away. Kat – I’m not pushing you away. Jackson – its okay to be sad but its not okay to be sad on your own. 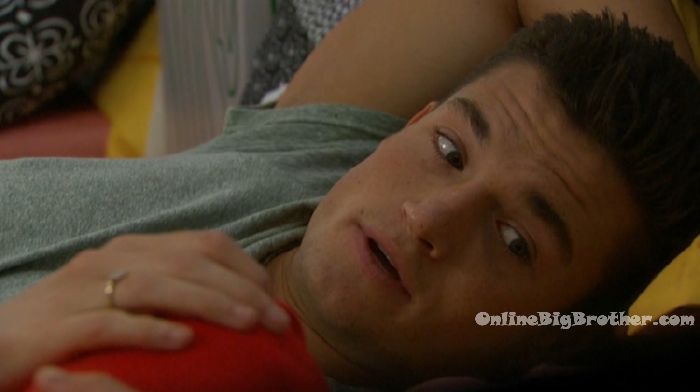 8:45pm Boat room. Jack – Sis is going to be a floater to me. Nick – unless she comes out of no where and starts kicking some a$$. We could always adjust. Sam – we all like Sis. Maybe we should see who everyone does in this HOH. Jack – okay just put it on pause. I just wanted it on your guys’s radar. I want a five. I want a five dude. Cliff joins them.

Cliff congratulates Sam on his POV win. Cliff – so what are you thinking? Sam – Kat came and asked me are you going to use it on me? Well she wasn’t saying that she was like are you going to use it? Well because we can’t say what we’re doing but I’m more leaning towards using it on you. You’ve been through a lot .. you deserve to be here more than Kat. And you also contribute more than Kat does. Cliff – I appreciate it. I would like to work with both of y’all. (Sam and Nick) 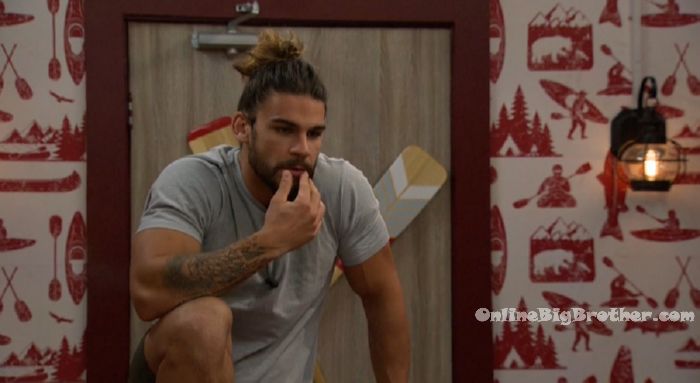 9pm The house guests start working out with Jack instructing them.

9:24pm Cliff wishes his son a happy birthday. They made a coffee cake to all eat together to celebrate it. 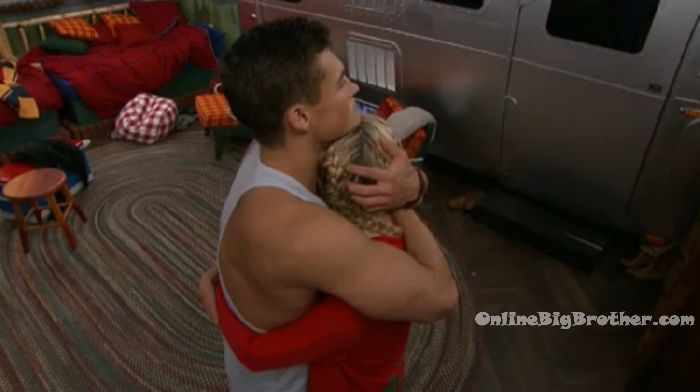 9:55pm – 10:27pmThe house guests are sitting around the kitchen table chatting about random things. They start playing the “I’m going on a camping trip and I’m bringing …” game where they go around in a circle repeating what they’re bringing and adding one more thing each time. 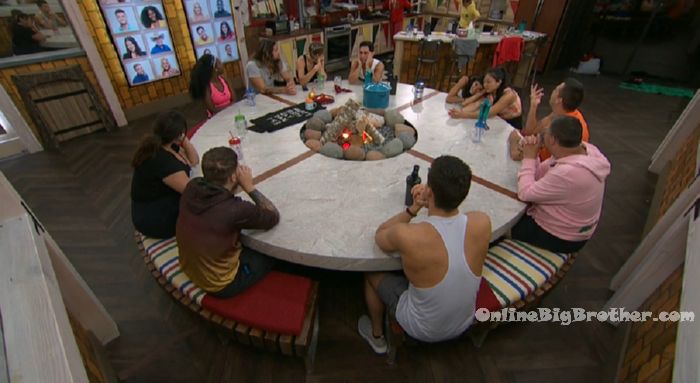 10:38pm – 10:45pm Boat room. Christie, Holly, Analyse and Jack. They talk about how Kat is freaking out. Christie – I’m scared that Kats’s going to dig herself a grave from veto meeting to eviction and like the house is going to flip and I’m stuck with the blood on my hands putting Kemi up. Holly – I’m worried about that too but I don’t think the house would flip. I had a long talk with her today and I was like you need to stop. Christie – This is like the 5th talk I’ve had with her and she is not getting it. Kemi never really did anything to me and I don’t know what to do about it. Ovi joins them.

11:30pm In the boat room. Cliff, Ovi, Sam, Jackson, Analyse, Holly and Nick are chatting about random things. Holly and Analyse do the titanic on the end of the boat. 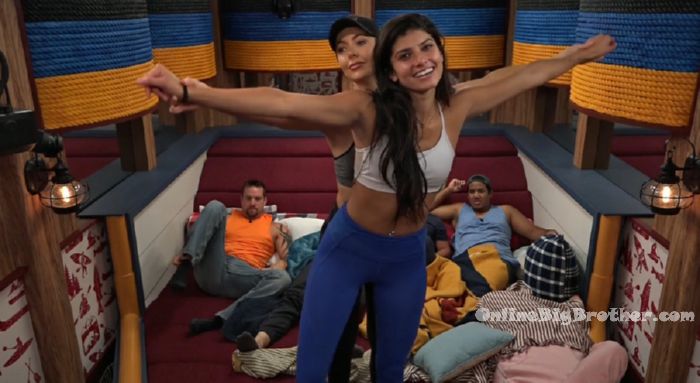 Ok, this is the 2nd night of live feeds and I still haven’t seen the HOH room. Have they talked about this? Is it closed for some reason?

So basically kat and Jackson had sex?

Yes, a few nights ago.

And Jackson seems to think only a few people have had sex in the house before…tells me he’s not a feedster. It seems more common in the last few seasons though.

And what a reason to have sex…gsssh

Ollie and April did it every damn where

Wow, what a start for Jackson. Camp counselor, firmly in the majority alliance and smashed the hot blonde all in week 1.

Welp! This explains why the girls were so quick to assume they were in the shower last night. I just don’t want to see it on screen (insert Swayleigh, Paulie/Zakiyah, Matt/Raven, Amanda/McCrae, etc., etc.)

Casual sex has become part of a stress relief plan. To each his/her own. Consenting adults…it’s their business. But, it does provide ammunition….makes that showmance a target.

So, I think if Sam doesn’t use the veto, Kat is out. If he does, he will take Cliff down and Christie will put up Ovi. Ovi would have to go.

Actually, from what I’ve heard it sounds like Cliff is coming down and they want to backdoor Kemi

yeah, it sure does sound like that will be the plan…..and IMO it’s the smartest play for Christie

He’s really looking like a douche bag. I thought I was going to like him based on his hometown preshow video… nope. His mom is watching this as he brags about all of his sexcapades . Cringe worthy.

I’m sorry if this has been answered, but Is “Sis”, Analyse?

Yup.. Sis is Analyse .. Sorry I should have made that more clear in the posts.

imagining what would be said by people if the person that talked about having sex not because they wanted the partner but because of the location also had a uterus. Hopefully this is a sign that we’ve left the era of slutshaming behind us?

Ugh, Jackson just seems like a sleaze ball to me. His good guy facade is wearing thin, to the point I need to drop him in the rankings. When he said I have a BFF girl back home and we sleep in the same bed clothed 50, 60 times all the time fully clothed….. no big deal ??? I thought – Yeah right total lie why are you sharing that info. Most guys don’t unless it’s a lie people who boast tell lies. He’s not going to last long.