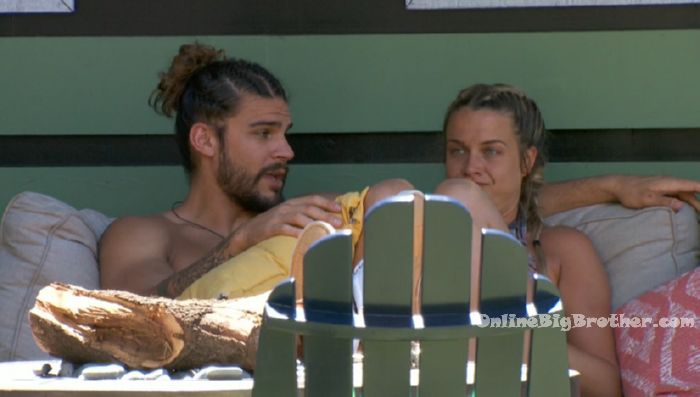 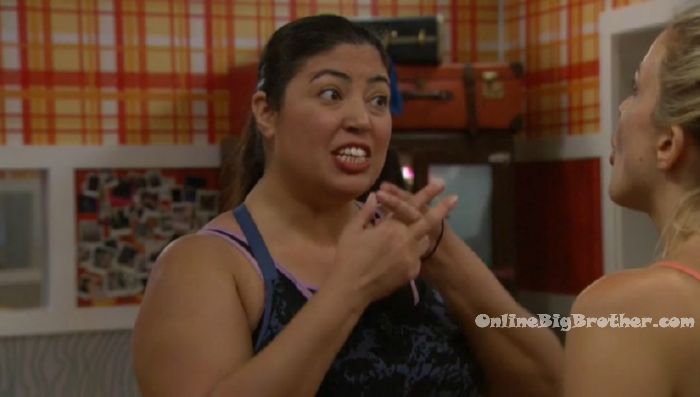 1:20pm Bedroom. Kat and Jess. Kat – this week I am not really going to do anything. I need to keep Jack in my corner because he can flip the whole house. I know the girls have my back but I also don’t know if Bella is going to flip her vote. Jess – she wouldn’t. Kat – I don’t know though. I have Cliff. I have I think Jackson. Jess – I want to say that Bella has more loyalty to Jackson than Jack. Kat – I feel like we in the long run we need to get rid of Jack. Jackson is more of a girls guy and Jack is a guys guy and a backstabber. Jess – I feel really bad for Ovi. Kat – I wish she (Christie) didn’t tell him he was a pawn. Because he’s going to keep acting … and he is going to get blindsided. Jess leaves. Ovi comes into the bedroom. Ovi and Kat both agree not to throw the other under the bus. Ovi – I really like you Kat. I wish both of us could be here. Kat agrees. Ovi leaves the room. 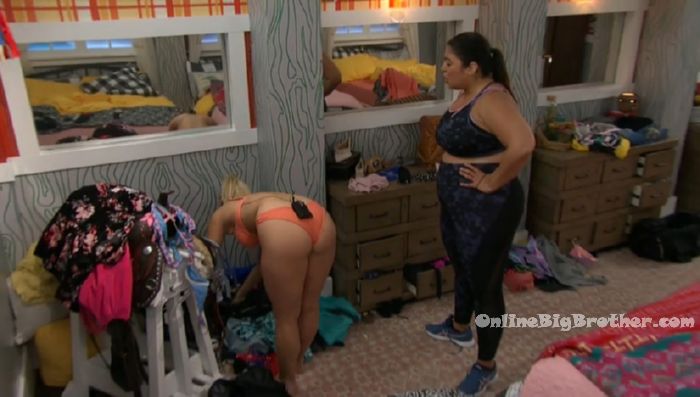 1:55pm Backyard. Jack and Christie. Jack – it will be a tough next couple days but you’re good. Christie – I know. I feel bad. Its sucks. Jack – I trust your decision with my life. I have your back to the Nth degree and I always will! Christie – I hope you’re not mad at me. Jack – nope! It totally works out for my game. The only thing that it would damage is if Kemi won HOH but she never will and even if she did coll we have numbers. Christie – 100%! Jack – I’ve never seen it in this show ..where cool go ahead and win HOH. Christie – I still feel like Bella and Nick are coming back. Like its not weird. Yesterday was weird. Jack – and you don’t have to talk to me for a long time.. like we’re good. Christie agrees.

2:15pm Kitchen. Cliff and Ovi. Cliff tells Ovi that he has his vote. If I hear something, I will let you know because I wouldn’t want you to be caught off guard. Nothing against Kat but I think she’s had too many breakdowns. I think next week when we have the next HOH we will see some battle lines drawn. I don’t think we will continue to the targets.

i’m assuming now that veto meeting is over, and Christie no longer has leverage, Jack will no longer be into Christie or feel the need for her to be in any of his alliances no matter how ‘i got ur back’ he says he is to her before saying ‘and you don’t have to talk to me for a long time’. Just a gut feeling. It won’t be long before he brings this up to Tommy. I’d assume by tonight.
I doubt Jackson will be any different in that regard. Face it, he already told Ovi that EVERY one wanted Kemi out except Christie.
I feel that production has stopped Kat from leaving knowing that it would ruin whatever plan they have set in motion regarding David, and out of concern that the replacement nom in Kat’s place would be more egg on the network’s faces in terms of public relations (valid or invalid egg in this case).

Production has convinced house guests to not leave quite a few times. it’s never a good thing for them if a cast member bails so they cajole, they may even placate a bit but they cannot simply say they can’t leave. Now I really want Kat gone.

another name
Reply to  Hmm...

last year they followed sam out the door, down the hall until the second left, down the corridor through the third door and out to the steet to convince her to return. That’s what happens when you sequester the one that just doesn’t get it to be a robot. they know the direct way out of the building.
yeah, they can’t hold them hostage. they will go to many lengths to convince them to stay.
remember a couple of years ago when that mouthy pots and pans dip tried to leave week one and two… and was convinced to stay. and won? when i say mouthy pots and pans dip i don’t mean dick. the one in the second he who shall not be thought about’s second runner up season.

Just when I think Jack can’t get any worse……

Anyway, it sounds like so many of the HGs are prepared to put Jack on the block of they win HOH.

This will be an exciting week, for sure!