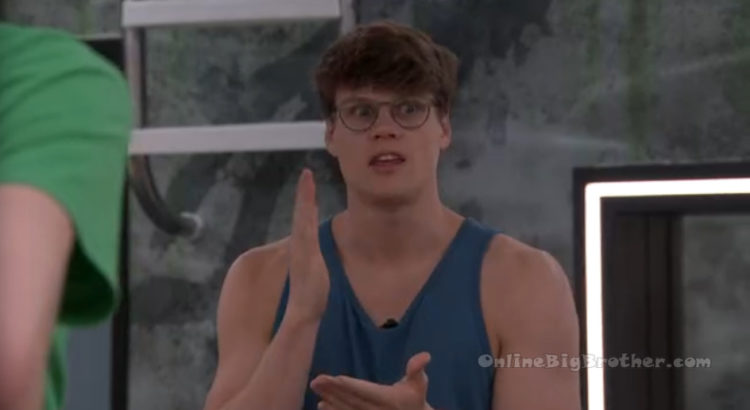 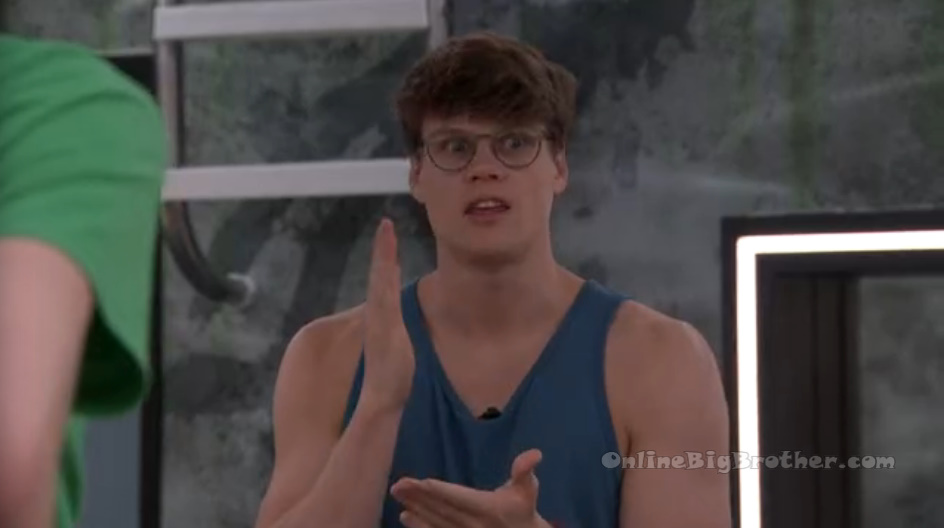 12pm Havenot room. Kyle and Michael.
Kyle – I feel like everyone feels like they have to win next week because if its another girl and then another guy goes home .. the only thing is and my pitch to Monte is like Ameerah and Nicole they say they have our back we get Pooch out this week, they’re promising Taylor next week. Like this is going to be a test. I am fine getting ride of Pooch at any point .. even if Taylor wins HOH and nominates you I still feel like we have the numbers and we can hold strong but I am worried the girls are going to gang up and if Monte is up .. lets take him out. Or Kyle, or you.. Michael – yeah like if the see a shot, they’ll take it. Kyle – exactly and they’re proving this with Pooch. They’re big thing is he is up and he’s an option, why not now. Michael – and if they have the numbers to take him out this week .. they will have the numbers next week to do that. Kyle – yeah. Okay they’re promising Taylor next week but then all of a sudden its Taylor and another shot. And its like okay we have the numbers… why not. You can’t fault them for that. They have a girl down… well we’ll see after the veto. Was it a good conversation with Pooch? Michael – I mean he did all the talking but …he talks so much.. and talks in circles that I am just like I don’t feel threatened by him. The best thing he can do is just keep f**king up. That’s why him winning the veto would be good because then we wouldn’t have to make that decision (to vote out Pooch or not). Then Taylor would go home. Kyle – and it would show Jasmines card of who she puts up. Then lets get rid of Pooch next week… like he is out of control. Michael – its just so funny that the best thing he is doing for himself is digging a hole.. that is going to be the reason to keep him around. Kyle – Jasmine is the same way, she just rambles. She spilled a lot of the beans. Its Nicole and Ameerah that I am worried about because they’re extremely intelligent. A women first alliance and the boys have kind of done the same thing but.. I am worried about Monte .. like they were legit yelling.. They head out of the havenot room. 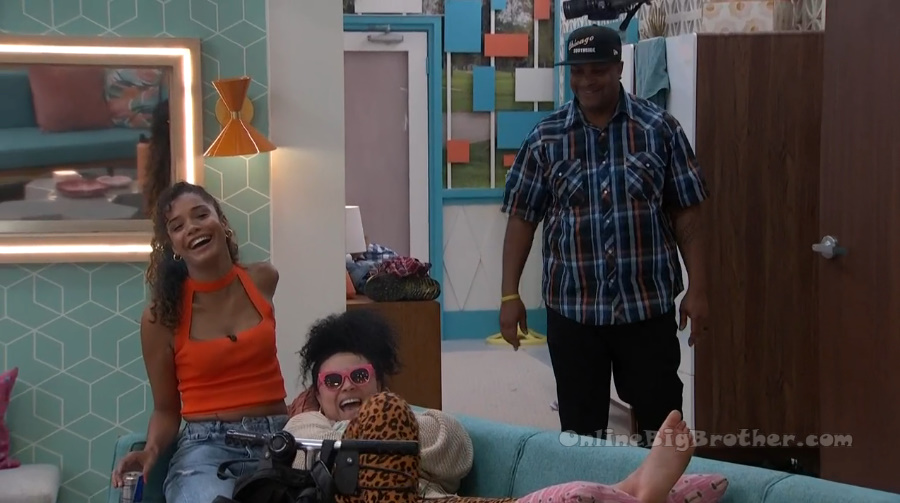 12:05pm Living room. Terrance, Alyssa and Jasmine.
Alyssa – what did they say (about her ankle)? Jasmine – that they’re going to do an x-ray.. and I could have a boot or a cast. A cast obviously is if its broken. Terrance – I don’t think its broken though.. like she still has motion. Jasmine – they’re going to do an x-ray but I also get a choice to compete. Alyssa – are you going to? Jasmine – if its something physical absolutely not! Why would I even risk it? But I feel good.. if it was anyone else… but I feel good. 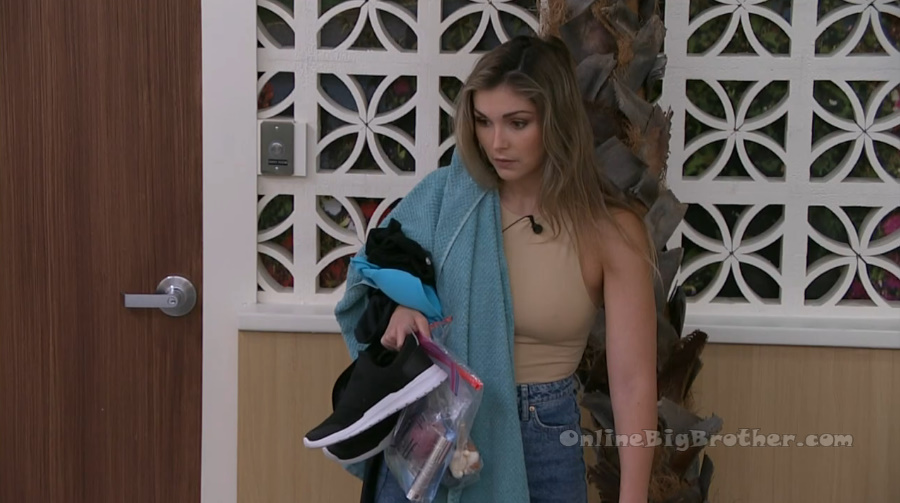 12:50pm Living room and Kitchen. The house guests are sitting around chatting while they wait for the veto to start.

12:58pm Bedroom. Kyle, Michael and Ameerah.
Kyle – I think all the outcomes will be fairly similar unless Pooch wins. Ameerah – and honestly even if he does its not the end of the world. Kyle – yeah I don’t think so either. Ameerah – its like whatever. Then we’ll just take out Taylor. Either outcome, the six of us are good. Kyle – yeah I’m not too worried.. Can one of us just win HOH next week? Ameerah – I’m going for it. Michael – I’m going for it. Ameerah – we all have to go for it. Kyle – the last one I was like as long as Taylor doesn’t win .. we’re good. Ameerah – I was actually good with Jasmine and I knew she wouldn’t put any of you guys up so she is not going for you guys at all. Kyle – no she is awesome.

1:03pm The live feeds switch to the kitty cams. The veto competition is starting now..

Here’s the thing I keep reminding myself:
Kyle stated multiple times to Monte last week that he didn’t want to be in an alliance with women. He wants season 16. He wants Cody and Derrick. He wants the detonators without christine… or with a christine as long as she’s as gullible as christine, and follows orders.
I keep telling myself I have to keep that in mind.
I keep forgetting and having to re-remind myself.

Kyle’s retell to Michael leaves out lots of stuff. Actually Kyle’s retells in general leave out lots of stuff.
Kyle knows Pooch has said Michael’s name. So does Michael. He knows Pooch said Ameerah, Alyssa and Nicole’s names last night. Kyle was pushing Nicole as the instigator.
He’s using the logic Nicole and Ameerah presented to Monte in Kyle’s presence, only applying it to the men. Instead of we’re safe from Pooch only because Taylor is here, otherwise he’s after us… that becomes it’s Pooch is our safety net to keep the girls from coming for us.

Everyone is right oddly.
The women SHOULD want Pooch out. He’s the one that drove the men’s alliance all women out talk night one. He has named every woman as a target, and Michael.
The men SHOULD want Taylor to go. She will target a man if she’s HOH.

In terms of alliances though: I’ve consistently said the Mamba group isn’t an alliance. It’s a shield co-operative. Monte and Kyle believe they should call the shots, and the group does their bidding. If they don’t agree with the rest of the group, they are fee to do what they want and the alliance should still have their back. That was totally working until….Nicole. oops.

again with Kyle.
Odd that he’s the one that has been conspiring to get rid of Pooch since night three.
He bonds with others using ‘i don’t like Pooch.’ His big point to Monte in the have not room that night: when are we getting rid of Pooch, gotta be sooner than later.
Conspirators remorse. He’s got his wish and doesn’t want it anymore. the actual fear of losing some testosterone in the house has him shaking. Finding out Taylor would target men? Icing on the cake that made his run back to Mantopia.
Kyle admits to Michael that it’s smart if the women go women first, because the men already have. Michael was not included and knows. Does that affect anything?

mamba was kinda paloma’s thing. without her it was pretty much over, but we’ll see. these houseguests don’t seem particularly bright (not that they usually are, this just seems a particularly dumb bunch). there’s way too much throwing names around and not enough just keeping your head down and going along to get along. why so much of the house is choosing sides instead of trying to get along with everyone is pretty baffling, but i guess it makes for good tv?

terrence is great (totally screwed gamewise, but i’ll be pretty content if he can make it to jury which i do think he can manage). joe’s growing on me, but the rest of the men i couldn’t care less about at this point. of the women, ameerah is definitely someone to watch, nicole i don’t have a great read on but could also be a threat. the rest aren’t looking great, but so much focus is on taylor it’s hard to really evaluate the game beyond her. and like yeah, it sucks what happened to taylor, but her game still isn’t very good, never was (why on earth would you reveal you’re a pagent queen? it makes you look super fake) and i kinda want her gone so that it’s over with and we can move on to something else to talk about.

Honestly, when it comes to Taylor i’ve said before that she was very obviously ignoring the women until she found out from nic that there might be a women’s alliance and they weren’t invited.
I don’t think the LEVEL of mob was required.
Has she proven that she has game? Not yet. Not to me.
Is it going to be harder because she’s stigmatized? Oh yeah.
The mob rule and shun aspect of her targeting is what i am unhappy with, and what i’m unhappy with in every season where it is apparent.
The thing is, Mamba recognized that Paloma was sliding, and got more cohesive for a bit, until it came time to fill her slot in the group and nobody asked Kyle or Alyssa their opinion.

i think taylor came into the game with a really poor strategy (if she had one at all), and as much as i too disagree the mob against her is unwarranted, she still doesn’t have anything indicating game to me that would place her particularly high in my esteem.

the thought of needing to replace someone when an alliance loses a member is generally a mistake imo. just make a new alliance that potentially overlaps with your old one.

Why is it okay for people to form alliances based off gender but it’s bad to form an alliance based off blackness (The Cookout)?

House guests can make alliances based off anything… my standpoint last season was pretty much alliances have been cool vs outsider, bros and showmancers vs everyone else, and that an all black alliance wasn’t any different than any of those alliances from a place of people looking for commonality in their bond.

If I recall my statements of last season, i believe a couple of times i stated that the changes to the casting directive leveled the field, so i wasn’t sure if the alliance was necessary from the standpoint of house numbers, but felt more like a right past wrongs not current policy objectivee. This is where i started saying there are 16 people playing big brother. I recognize they are all different, but they are all people and i’m judging them on that basis.

I think I was weirded out by season 22 when Bayleigh was supposed to be included in the alliance, but Memphis didn’t want her, he wanted Christmas instead. His reasoning was if you take Bayleigh you have to take Da’vonne and that logic escaped me.

I will admit, that I did think bias was at play. So did the members of the cookout on feeds when they worried that they’d be seen as acting out of prejudice by the public, and admitted they were acting out of bias for a greater cause.

What I didn’t like in the cookout was a couple of the cookout members saying Hanna and Kyland weren’t full members because they were only 1/2 black. That was just as illogical as the previous example.

I don’t know if I answered your question, but i’ve been honest.

I was LIVING for this …

Ameerah So why don’t you win HOH next week Monte
Monte: well of course …
Ameerah : (cuts him off) but you’re not even trying

Michael won veto.
He likely should not have done that….

if pooch or taylor was about to win he probably has to, but yeah, this puts a target on his back.

He TRIED to throw it to Taylor but she messed up (per her comments to live feeders). He was probably making sure Pooch wouldn’t win & he/Taylor sounds like were neck & neck so he can’t OBVIOUSLY throw it or then the house is back to targeting him anyway.