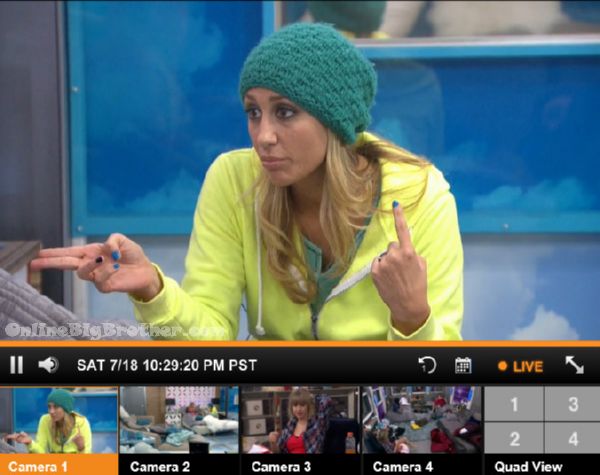 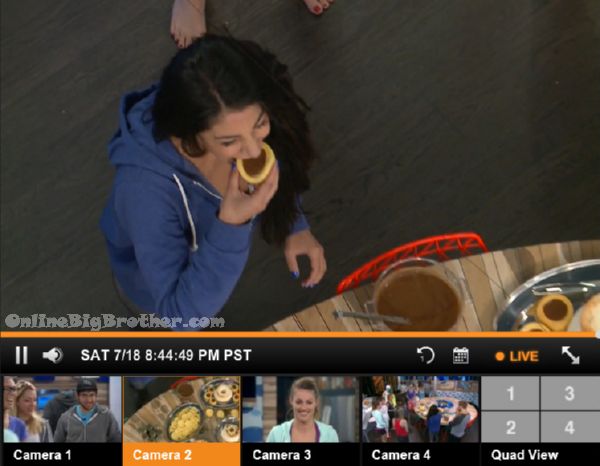 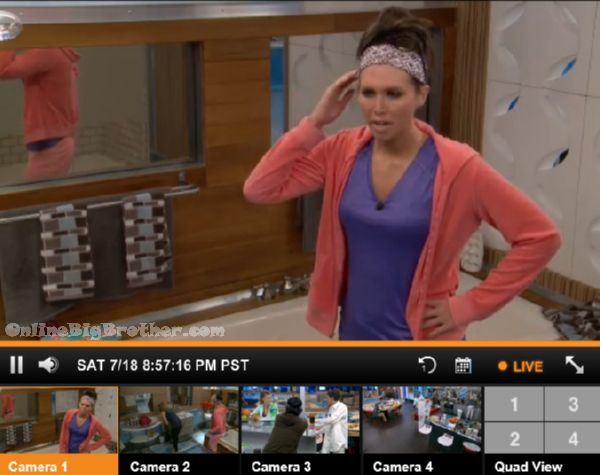 Audrey says she can be a spy in the Have nots because he’s in there with John, Becky and Jackie
Shelli tells her she can stay up here but cannot talk game
Audrey – I do have one update while it’s still fresh in my mind 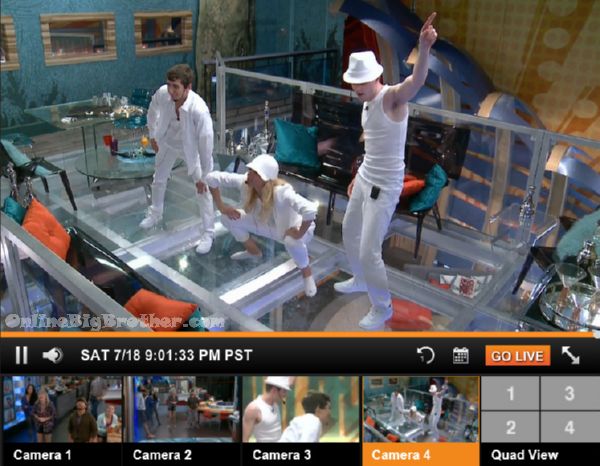 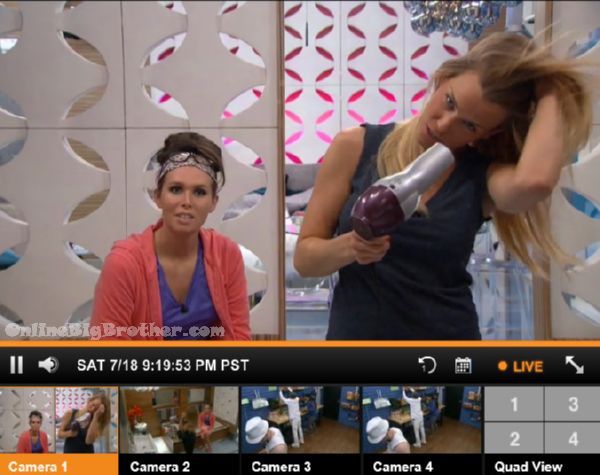 9:21pm HOH Audrey and Shelli
AUdrey says Becky as a Havenots is a good thing because she’s a good cook
Audrey – That’s a good group fro me to be a have not with.. that’s a good opportunity for me to hear what they have to say.
Audrey says the best thing for them this week is her and JOhn win HOh and she will talk John out of nominating her ..
Shelli isn’t worried about John targeting her
Shelli tells her she needs to calm down sit back and enjoy some slop and gravy. 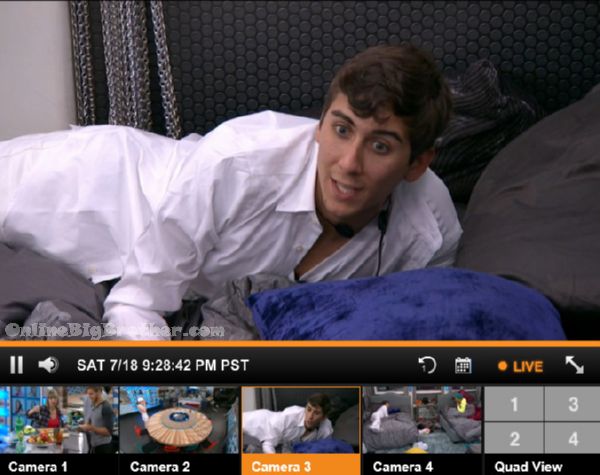 Vanessa wants to make a deal with Jason and 2 of his allies. Says he only has Meg, “Honesty the other person I am close to is James but that’s thru Meg” 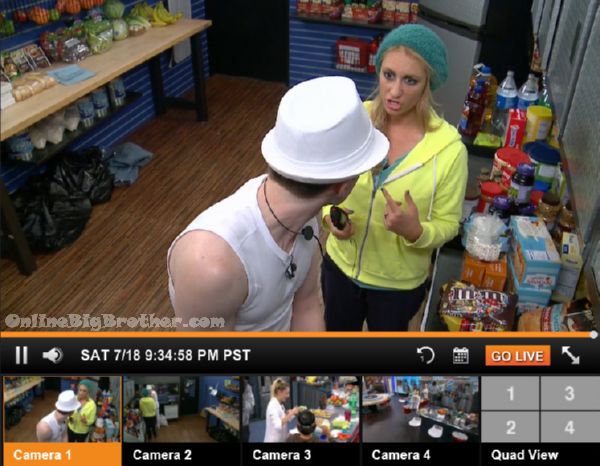 9:35pm Vanessa and JohnnyMac
Vanessa tells him she needs to talk to Shelli first then she’ll talk to him.
Vanessa – I need to make sure she wouldn’t be pissed if I used it
Johnny mac – I don’t epexcet you to use it anyways 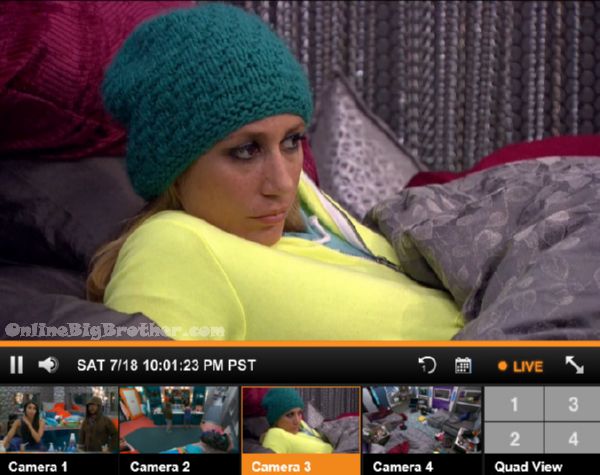 9:59pm Vanessa and Austin
Austin asks if Shelli would put him or Liz up. Vanessa says no way if that happens it makes an enemy out of her and everybody.
Austin – Deal with jason would be good
Vanessa – Not Just him I’m going to do one hell of a deal
Vanessa is going to cut a deal that ecompasses JAson and his allie in return for her using the veto on him.
Austin asks who Shelli’s putting up
Vanessa whispers Becky, Audrey or Steve
vanessa – I’m fine with any of those
Austin is worried about Jason coming after him and Liz.
Austin – I’m scared of JAckie and Becky
Vanessa – it’s going to get nuts
Austin – the next 24 hours .. just be in there when she’s talking to Shelli.
Austin – she’s going to go Ape Sh1t 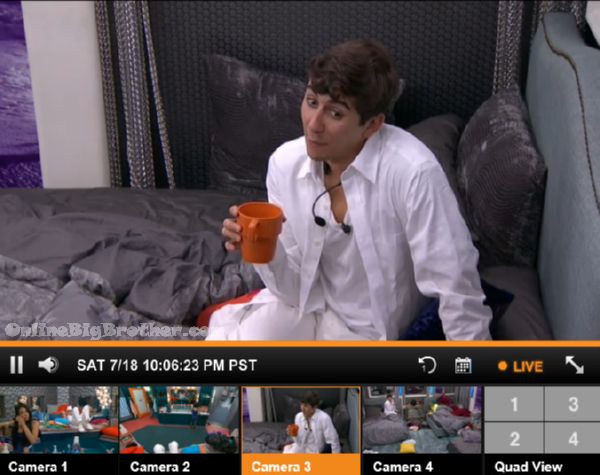 10:03pm Jason and Vanessa
Vanessa tells him she’s need to talk to Shelli to make sure she’s fine with her using the Veto. Jason says Steve has been staying up late with Jackie since Thursday’s show.
James joins them.
Jason tells her the Veto needs to be used period otherwise he’s dead.

10:22pm HOH Vanessa, Shelli and Clay
Vanessa is asking if they are OK with her using the Veto. She’s wanting to go to jason and make a big deal.
Vanessa tells her she could have thrown the POV at the last second but she knew it was best for them to get the power. She wasn’t going to do what Austin did last week when he threw the POV to johnnyMAC. She’s still upset he did that.
Vanessa “it doesn’t have to be Audrey there’s 3 other options, Steve and Becky are the other options”
Shelli tells them about Audrey trying to tell her JOhnnyMac could target her if he wins the HOH.

Vanessa says she’s worried about Jackie, Vanessa thinks she could go up if Jackie wins the HOH.

Live Feed subscription gives you CBS All Access thousands of archived shows. Live Shows like Big Brother, all the Big Brother Seasons, and 24/7 coverage of what is happening inside the Big Brother House. Plus there’s flashback that lets you go back to any second of the feeds and rewatch what happened. Simon and Dawg will index the season just watch the parts worth watching. All this for $5.99 a month try it out 1 week free. Support our efforts and get your feeds via a link on this site. Live feed subscription Sign up

Vanessa is already trying to get Audrey to stay. I knew the second she won POV that was it for the plan. Not that I had faith Shellie would do it anyway. Hoped Jason would give her no choice by winning it. But stupid Vanessa had to screw things up

Get Some Help
Reply to  Mason

They havn’t updated it yet. She’s just blowing smoke right there. She’s trying to cover up her little group with Steve by throwing his name out. The conversation goes on with everyone still wanting Audrey, including her. Then Shelli once again starts backtracking.

Mason
Reply to  Get Some Help

yes I see that now, but I still don’t trust it is going to happen.

No it’s not Vanessa, it’s shelli. They all know shelli is scared to put audrey up, so that’s why she is listing other people so shelli doesn’t feel “pressured” to put audrey up.

vanessa talks a big game… but she whimps out later on. laaaaame.

Regarding attempting to backdoor Audrey, I’ve said it before and I’ll say it again…. Not yet…..Not yet…. It’s too early to make a big move…. LOL & SMH just remembering her

Oh My God!? Another week of power trip queen Vanessa? This is torturous. I guess this will be another week to just go out have fun and enjoy the Summer. Yay, thanks Vanessa!

I knew the whole “let’s get Audrey out” thing was too good to be true. These chicken shits are going to talk themselves out of 500k. Cannot wait to see Vanessa’s bug eyes when she’s evicted.

Vanessa is about to screw the backdoor Audrey plan up. I knew it was to good to be true, now that she’s pov holder that’s gonna go to her head and shes gonna try and make 10 more deals in the house at that point she’ll have a deal with everyone in the house except for the fish. (Assuming they’re still in the hoh bathroom)

I want audrey to get backdoored but, Shelli doesn’t have the d!ck to do it!!!

Hahaha I’d hope not, otherwise that would be one hell of a shock for Clay!!

I knew the punk Shelli wouldn’t go through with it. Just put her up and send Audrey home, there are plenty of crazies and game players to make the season. Once again no one cares about this transgendered mess, we care about the game!

I love how JohnnyMac said “I don’t expect you to use it anyways”. It’s true…she feels like she is the greatest player just because she won HoH last week and won the Veto. I hope she gets evicted soon because she is cuckoo!!!!!!!

i know Vanessa would switch her target!!
Audrey may slide away again this week

Johnmac , why do you agree to be a pawn again!

not so sure JM agreed, I think he was “asked” to a pawn, and what choice does he have, he has to say sure, are make enemies of the people in power. Makes me sick how they use him and hope he gets power soon and takes them out

i dunno. steve’s standing up to that notion has kept him off the block for two weeks now whereas i’m very worried for johnnymac’s game. jason has enough allies he can potentially swing the votes to stay.

So Vanessa in two weeks will have gotton Jeff and Audrey out if this latest plan sticks.

Two of the most hated people in BB history and also very good game players.

But Nessa “Sucks” and you wanted Jeff And Audrey out but let’s spin it to “Vanessa Sucks” just cuz she does.

On another note…James has become a little better person since Jeff left. I think a lot of his horrible shit was him trying to be like Jeff. Who knows why anyone would want to be like that.

What gauge are you using to measure that?
Reply to  freefromwhatyouare

I really hope Vanessa saves Jason and Shelli wastes her HOH by putting up Becky or Audrey!! I wish she would put up Austin just to make waves, but that won’t happen. Either way, if Vanessa is the smart game player that I think she is the she will definitely use the veto.

Why did Shelli let herself win HOH if she didn’t want to evict anyone? Stop being a big baby, put on your big girl panties, and backdoor Audrey!!!!!!!!

clay covered his tracks with shelli in saying he didn’t tell john to throw the bob, and didn’t tell john Jason was the target a couple of days ago. that doesn’t mean john forgot it just because shelli bought the cover up.
if Jason comes off the block John is lost to clay shelli and vanessa as a source of information.
way to keep track of what you say clay when you agree that vanessa should use it on Jason.
moron.

Look at Shelli try to find any reason not to put up Audrey. Everyone in there and everyone watching has wanted this since week one. This what happens when you go play mommy, telling everyone they’re being “mean” to her. If everyone is doing it there’s probably a good reason. Now she’s completely sucked in. 33 years old and a psychology major, you would think she would get this. She’s starting look like the one with issues.

Someone out of this group HAS to win head of household next week to get thing going. Hopefully they don’t believe all fake deals they’re trying to make with them. “Yeah I’ll put you up, but don’t put me up. I want you to put up someone that’s a number for you up.” Yeah sure ok

We need to get Steve out he’s targeting BoB one of our favorite allies.

What would happen if Steve won HOH lol

totally. i’d love to see a steve hoh, not only for seeing him make decisions that impact the game but all the asskissing people would try to stay off the block.

do you really think Steve would run his own HOH, or would he let someone tell him what to do? Not that he is not smart enough, just is he brave enough to go out on his own?

I think Steve has avoided winning for the simple reason he’s trying to not attract attention. When Steve decides to try to win, he’ll definitely be ready to remove his target

Vanessa chill! Every picture I see of her she is always so intense and always ready to hustle and in game mode. Have fun and laugh a little!

Well the big personalities Jace, Da, & Jeff are gone and we’re left with big egos Vanessa, Clay, Austin, & Shelli. Can we start this season over ?? Sure they were all big personalities and opinionated and hurt themselves game wise because of it, but the fact they had no filters is what made the feeds so fun to watch. BTW, great work Simon & Dawg. Your hard work and long hours are appreciated by all of us !!

why do they think Audrey would get votes to stay against Jason but not against John…. sounds like Jason just trying to get off the block is all.

How does the other side of the house not realise that these guys are in an alliance They are always in the HOH room together talking.

Here’s a random thought – how is Liz supposed to know the steps to the group dance when the twins do the switch on Monday?
Didn’t the three (John, Jason, and Julia) have to practice the dance together? Is production trying to out the twins on purpose?

How much farther out can they be? Everybody knows about them. Does one of them have to be evicted before the fifth eviction or do they just have to be found out?

What is it going to take for someone to go full batshit crazy on Shelli and Vanessa for their inability/unwillingness to get Audrey out? I haven’t wanted to see someone exit the house this much since Amanda Zuckerman. C’mon, pull the trigger already!

Wake me up when she’s evicted.